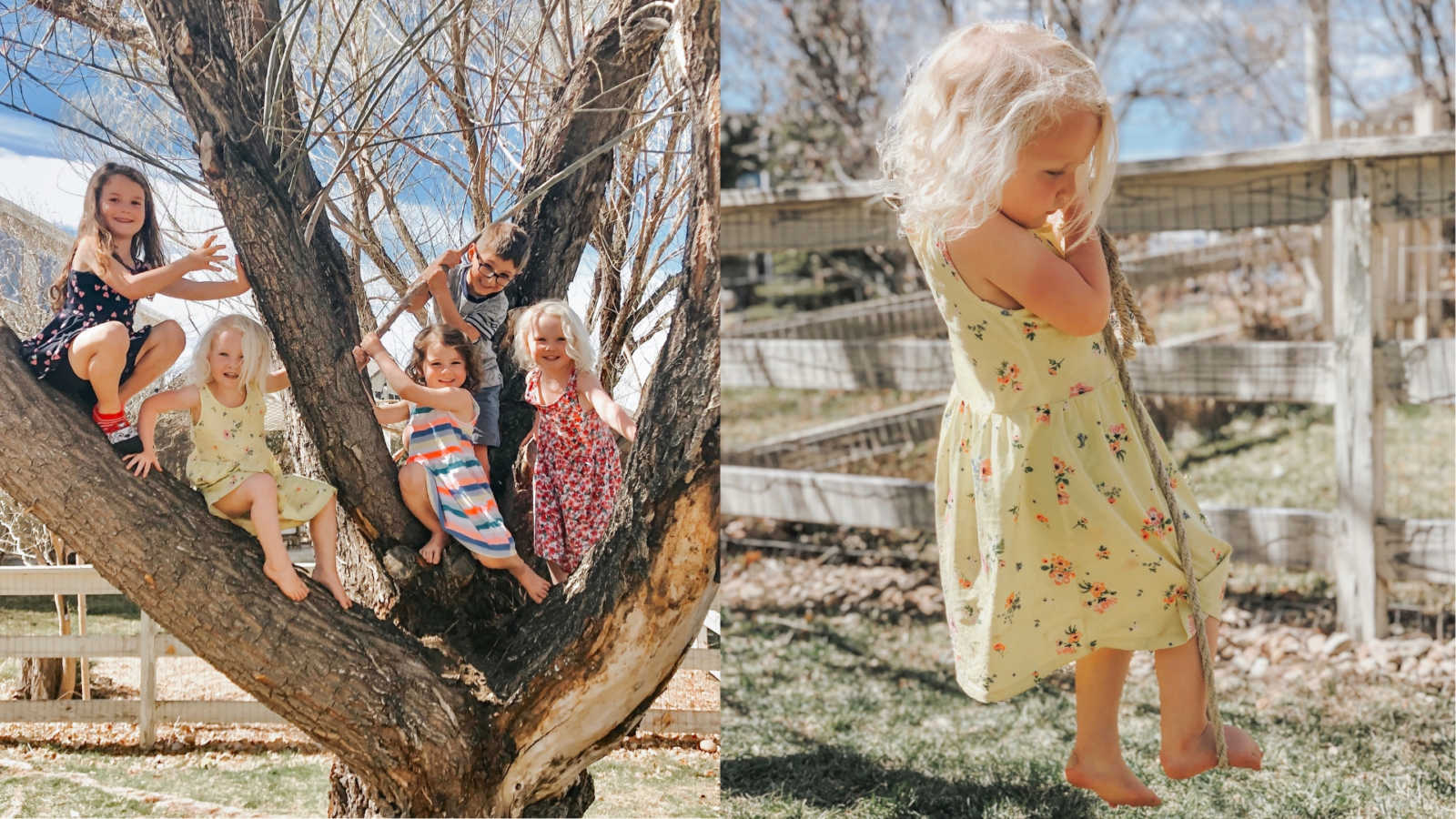 “Growing up, I was obsessed with Little House on the Prairie. I read all of the books and watched the series from beginning to end as a young girl. My mom signed me up for a monthly program where they sent me various Laura Ingalls favorites and I cooked recipes that were cooked during her time. I just couldn’t get enough of it!

I loved the simplicity of their lives. I found it fascinating that little girls could have just one doll for years and years, while I had an entire room dedicated to my American Girl Doll collection. I was captivated by their one or two dresses they would rotate while I had a closet filled with dozens and dozens of different options. Everything they had was so precious to them. They didn’t take anything for granted. They appreciated what they had, and they worked even harder to get something new.

I knew that one thing I wanted to do when I had children was to give them a more simplified childhood. One that has very few electronics. I look at my own children’s childhood and I see a world that’s completely opposite of the one I grew up worshipping. Their world is filled with screens. Everything is in constant motion. Their intimate little realm is so loud. Almost every toy makes a noise. The TV in the background is a constant reminder that commotion is nonstop for them.

The tablet we throw at them in the cart at the grocery store and at the table in a restaurant is us feeding into that continual need for entertainment. There’s hardly any silence. We’re asking them to use their imagination less and less. We’re already creating a habit of looking down at a screen instead of in the faces of people…and isn’t that something we already find really concerning about the teenagers and adults in our society?

I, like many other families, struggle with quieting the buzz around them. The TV and tablet are more like the modern-day babysitter than it is anything else. In the past I’ve given myself excuses, convincing myself that their learning apps are giving them a leap forward in education. Or that the TV is also teaching them lessons about teamwork. But how have we shifted so quickly to technology teaching our kids things that we should be, or that they should be learning from others their own age?

This month I really took a step back on how I’m raising my kids. I’ve always been one to believe in a more simplified childhood. I want at least a fair amount of that Little House on the Prairie life for them. But have I actually been practicing what I preach? In some ways I believe I’ve done a great job and in others I could definitely improve.

Now that spring is poking through the sky and my vision of what I want for them is stronger than ever, there’s more I want for my kiddos. Or less, I guess you could say. I want their lives to be less busy, less noisy, less hectic.

I want my kids to be bored so they have to use their imagination. I don’t want them to assume that every moment needs to be filled up with ‘something.’ We view boredom with this fear that having nothing to do is going to be detrimental to their psyche. But do you know what boredom did for my oldest last week? It forced her to use her imagination and create a book she wrote and illustrated about what animals do at the zoo every day. Boredom is a great teacher. I’ve spent most of my parenting journey losing trust in my kids’ ability to tolerate unfilled time. But the truth is – it’s actually good for them!

I want their summer to be filled with chalk and hop scotch. I want their hands to be rainbow painted from channeling their best version of Picasso on my driveway. I want them to jump rope until they figure out how to do a double under. I want them to take turns learning how to spin a long rope while their sibling jumps in the middle. I want them to belt out ‘Fuzzy Wuzzy Was A Bear’ every time someone jumps.

I want their afternoons to be filled with the best climbing trees and the fastest tire swing. I want their mud pies to be big and messy, while they argue over who has the best one. I want their fingernails to be so black from the dirt and their hair to be so sweaty and matted that a shower is a must every night.

I want them to learn how to play Red Rover, Capture the flag, and Marco Polo. I want them to swim until they feel like their skin is going to fall off from being so soggy. I want to be the judge on their sand castle competition and I want to play referee through the arguments they will have to work through, together. I want to kiss their scraped knees and be their biggest cheerleader when they learn to ride a bike without training wheels.

I want nature to open their eyes and calm their hearts. The peacefulness the outside world can bring, yet the excitement that awaits, is the best mixture in childhood. Bare feet, sun kissed skin, and the freedom to just play is what I think my kids have been missing in the past.

Sure, they’ve spent hours outside playing with each other. But when they come inside what have I always done? Handed them an iPad. Turned on the TV. I immediately continued the stimulation instead of letting them unwind from the new experiences they just enjoyed. I want the simplicity to continue within the walls of our own home.

Simplicity. Like this little rope swing their dad constructed for them.

The world is certainly not like the one we grew up in, but my hope is that they can at least have a taste of it. I strive for them to see the beauty in the mundane.”

‘My mama’s baby is going to come out of her crotch and it’s going to hurt! Then it’s going to eat milk from her boobies!’ My younger mom-self would have died. But, she’s not WRONG.’

Provide support and encouragement for other moms. SHARE this story on Facebook with your friends and family.