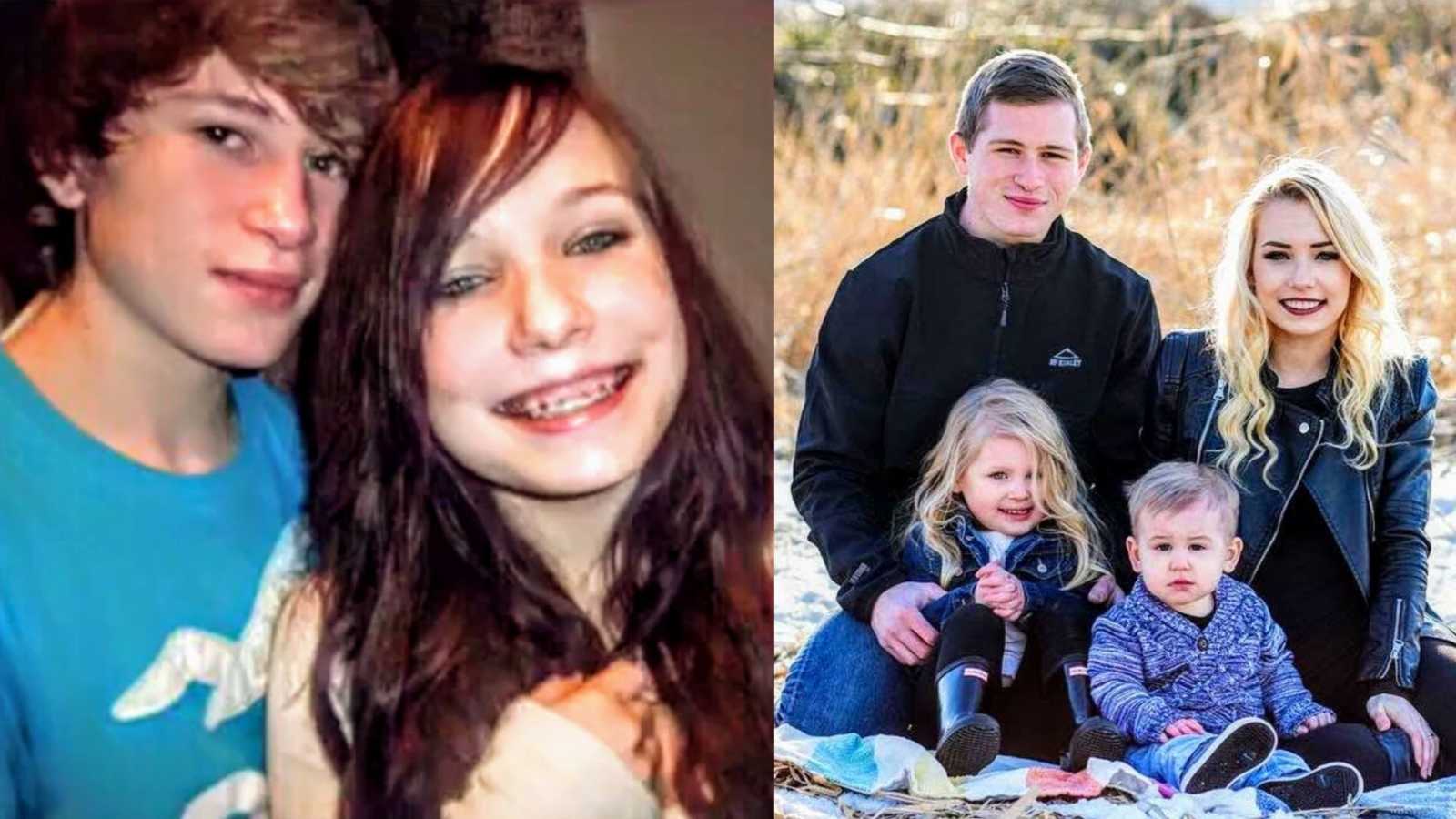 Noah and I met at the mall, back in 2010. As soon as I saw him, I knew I wanted him to be mine. We quickly began dating. Spending every moment we could together. Skipping class to see each other, taking our parents vehicles to go across town to hang out. We were enthralled with each other.

A couple years passed of this, and we graduated high school together. Right after graduation, I found out I was pregnant. I was scared, but Noah told me he would be different than other all the other teen dads. He told me he would always be there for us.

One year passes. We have our three-month-old baby girl, who we named Arianna. Noah got offered an amazing job opportunity, 10 hours away from all of our family and friends, with our brand new baby. We were only 18 and 19. It was scary to move that far away. But we did it. And right before we left, Noah proposed to me. With our baby girl and all of our friends and family watching.

So off we went, 10 hours away from everyone and everything we knew. And for eight months, Noah worked 14-hour days while I stayed at a secluded house with family of Noah’s I had never met before moving in with them. It was a hard eight months. We both battled depression at that time, but we got through it together. After Noah had put in enough work out there, we decided it was best for our family to move back home.

6 months later, we were getting married. On our four-year dating anniversary, at 19 and 20, with our one-year-old as the flower girl. It was a magical day. I have never felt so much love as I have before that day.

A few short weeks after our wedding, I found out I would be expecting our second baby. A boy, who we would name Jack.

Nine months later, out came our baby boy. We were now 20 and 21 and married, with a boy and a girl. We were complete.

The next couple of years were good, filled with camping trips, family fun nights, and just enjoying being a young, successful family.

But, at 24, my mental health took a turn for the worst. I found myself not wanting to clean, not wanting to cook, not wanting to shower, and barely wanting to be a mom. Noah and I began arguing more. I became more and more unhappy. So, I decided I need time to work on myself, go to therapy, and get back to being the person I was.

For the next year and a half, Noah and I co-parented. Wonderfully. We still spent all holidays together, with me even sleeping at his house Christmas Eve so the kids would wake up with both parents there. We both wanted the kids to know we both still loved them and that will never ever change. Even if their mom and dad aren’t together. But the separation wasn’t easy. It made my mental health even worse.

I remember one day, I had a bottle of pills spilled all over my bed, and my mom walked in, and I was forced to go to the hospital and get the help I desperately needed. But, Noah was there the whole time. He held my hand while the doctor assessed me. He stood by me while I waited for my anti-depressants to be filled. He came over at night when it was all just too much for me. He was the better parent when I mentally couldn’t be one.

After about a year and half, I was mentally better. I was cleaning more, cooking more, smiling more. So, Noah and I decided we were too good to be apart any longer.

It’s been a struggle for Noah and I. And we’ve been dealt our fair share of crappy cards. But we’ve made it. It’s not always easy. It’s not always beautiful. It can be quite ugly sometimes. Because that’s life. That’s relationships. Sometimes it takes time apart, work, or whatever it may be, to get back on track.

But if there’s one thing I’ve learned, it’s that your mental health needs to come first. Don’t wait until you’re at your worst to get help.

And I’ve also learned that if you’re meant to be together, you will be. ”

This story was submitted to Love What Matters by Caitlin Fladager. You can follow her journey on Instagram. Submit your own story here and be sure to subscribe to our free email newsletter for our best stories.

‘It all started when I got on Instagram. I became one of those girls. The Insta famous ones who always look amazing.’