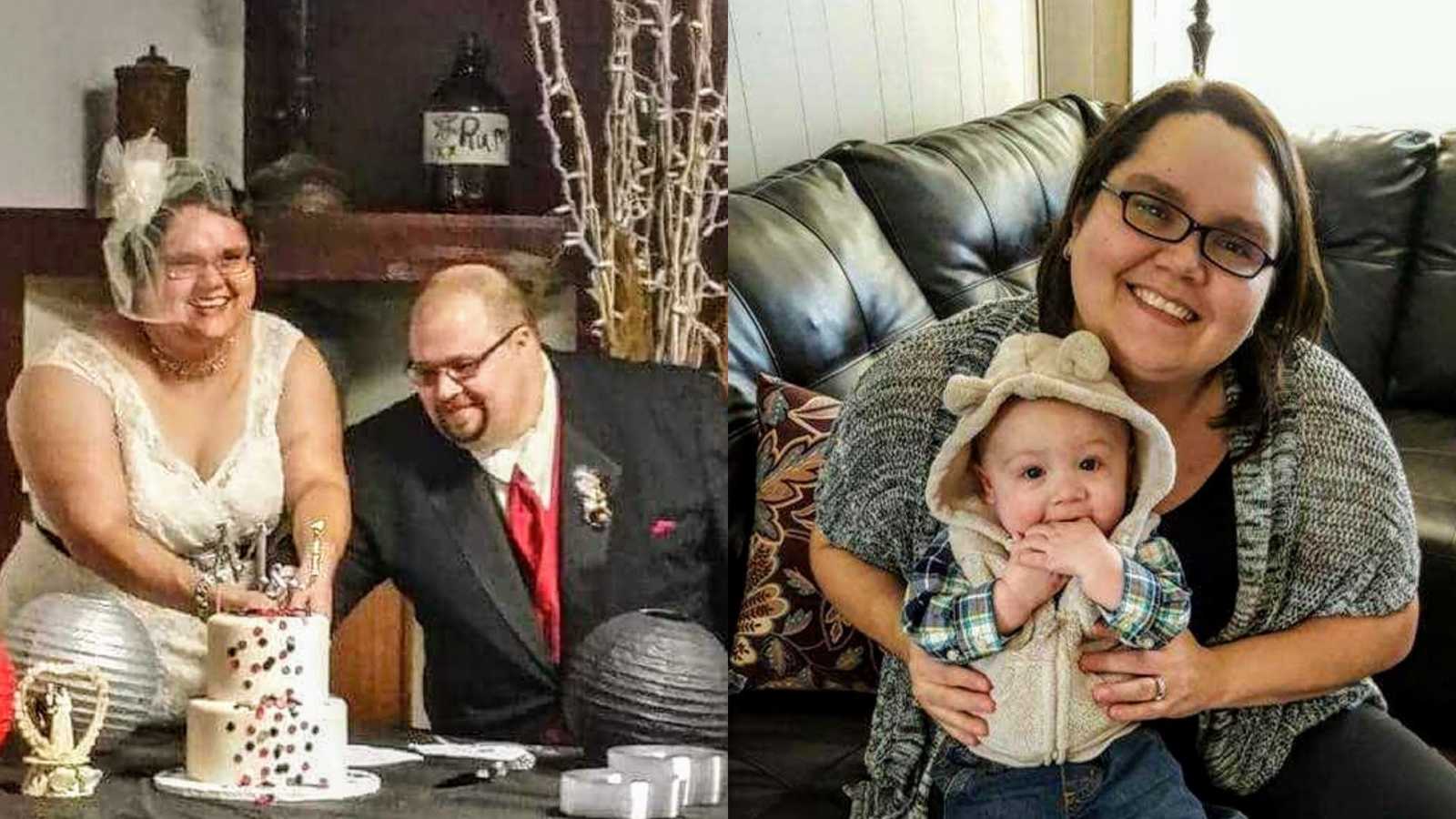 “I was one of the lucky ones.

Jon and I met on a free online dating website called OKCupid in 2011 and hit it off right away. He was in Louisiana and I was in North Dakota, so the first few months we knew each other were spent communicating entirely through online messaging, texting, and phone calls. When I flew to Louisiana to visit him for the first time, we both knew. This was it.

A year and a half of long-distance dating later, all we wanted was to be together. Waiting to see one another again after one of our visits always felt brutal. Then, on a chilly March evening in 2013 when I was visiting Louisiana, Jon got down on one knee, produced a ring and asked me to be by his side for the rest of our lives.

I couldn’t wait to begin planning our wedding. I bought several bridal magazines at the airport and browsed them the entire way home to North Dakota, dreaming of our big day.

As I delved into wedding details, I was plagued by lower back pain that wouldn’t go away. Given that I had already had two surgeries for multiple herniated disks and a third surgery was guaranteed in my near future, I assumed that third surgery would be sooner rather than later. I scheduled an appointment with my doctor who ordered an MRI in order to see what was going on.

To my shock, the MRI revealed a large mass in my abdomen. Further imaging uncovered the culprit: a tumor on my left ovary. Surgery was promptly scheduled in Sioux Falls, South Dakota, the nearest city able to accommodate such a procedure.

I called Jon in a panic, terrified at the news and what it could mean not only for me, but for a couple preparing to embark upon married life. I explained what was happening and that it could affect our chances at having a family in the future. If he wanted to leave the relationship, I would understand.

My sweet Jon never once considered leaving me, telling me I was stuck with him forever and that he would be behind me every step of the way. He booked a plane ticket right away.

One September morning, I kissed Jon and my mother, then was wheeled away into surgery. I remember the bright lights, the antiseptic scent of the operating room, the chill in the air, then the mask over my face. Blessed darkness.

When I awoke, I was informed that the tumor had encompassed the ovary so much that both the ovary and fallopian tube had to be removed. The tumor was Stage 1, the earliest — good news. But it was Grade 3, the fastest growing type of cancer — scary news. I had an official diagnosis of ovarian cancer and treatment was in my immediate future.

That night in the hospital was one of the worst nights of my life. Jon stayed in the hospital with me because I didn’t want to be alone when my mom went back to the hotel. We watched “Wreck-It Ralph” on the television to try to take our minds off of things, but it didn’t help. I was petrified with fear, sobbing into Jon’s shoulder as he leaned over my hospital bed and held my hand. What would this mean for our future? Would I survive cancer? And if I did, what would it mean for our prospects of starting a family?

Jon returned to Louisiana. Mom and I returned home to North Dakota. But Jon would be back soon for our efforts at fertility preservation, a shot at someday having a family.

Fertility preservation was no fun. It entailed, over several weeks, daily shots on my behalf and numerous 400-mile round-trips to the nearest fertility center to check how I was doing with the release of eggs and when would be the best time to retrieve them. The only bright spot was Jon’s visit so that he could make his genetic contribution. At the end of it all, we wound up with four viable embryos that we dreamed would be living, breathing children someday.

Once more, Jon returned to Louisiana and I returned home.

With our embryos frozen, it was time for me to begin six rounds of chemotherapy, spaced apart by three weeks per treatment. The first step was implanting a port just under the skin on the left side of my collarbone.

It’s kind of funny how quickly the whole chemo thing became routine. Mom would pick me up and take me to the hospital. We’d ride the elevator to the fourth floor, sign in to the infusion room and a nurse would take me to a seat. She’d apply a freezing cold spray to the port to numb it, insert the needle, and then I’d sit there for eight hours, watching the chemicals drip slowly into my body.

Those days were so long. Cold foods only in the infusion room, because the smells of many hot foods may make people undergoing chemo insanely nauseated. (I discovered my triggers were fried foods and beef. The kicker was that all I wanted was a cheeseburger and fries.) The nurses would bring me virgin mimosas, a mixture of orange juice and Sprite. I would nap for a while, read or play on my Kindle Fire, watch television, talk with my mom or my friend Jill, who came to visit during most of my treatments.

For at least two days after, I would be a slug. Completely devoid of energy, wanting only to sleep, plagued by uncontrollable pain, especially in my knees. There was no relief from that pain. I would lie in bed, feeling like my legs were on fire, wishing and hoping for relief that never truly came. After two days, I would return to work. The whole cycle started over again three weeks later, lasting from October to January.

There were so many doctor appointments during those months and at least one overnight hospital stay for exhaustion. Several times I had to go in just for an IV to keep me hydrated. My hair fell out until I couldn’t bear watching it anymore. My sister helped me shave my head so I wouldn’t have to watch the hair loss. Soon, I was completely hairless. Even my eyelashes and eyebrows were gone. Those months were exhausting and full of fear. Jon and I talked constantly, continuing to plan our wedding even as I underwent treatment. We shared our hopes, fears, and everything under the sun while continuing to hope for a good prognosis.

On a late January day in 2014, I rang the bell signaling the completion of chemotherapy. I was overjoyed. And all I wanted was a dang cheeseburger and fries, which I got a few weeks later once the chemo chemicals began to work there way out of my body and the nausea subsided. It’s still the best cheeseburger I’ve ever had in my entire life.

A few days after that cheeseburger, my oncologist told me that the testing wasn’t picking up any traces of cancer! My hair began to grow back. The pain diminished and disappeared over time. But chemo has not been without its side effects. I have noticed a definite difference in my mental processes. It takes me longer to process things and my concentration has taken a nosedive. Chemo brain is a real thing, folks. But it’s a small price to pay for my life.

That August, I married the man who stood by my side through cancer and moved to Louisiana to begin our new life together as husband and wife. Life was wonderful.

Less than a year later, I began having lower back pain again. Once again, I went to the doctor, who ordered an MRI and sent me off for blood work. The next morning, my phone rang at 7 in the morning. I answered and heard my doctor’s voice saying I couldn’t have an MRI because I was pregnant! Despite losing an ovary and Fallopian tube to cancer, I was able to get pregnant naturally. I gave birth soon after.

He is our miracle and will be our only child.

Because I am considered at high risk of a recurrence of cancer, I had a hysterectomy in January that took my remaining reproductive organs. We are also in the process of donating our frozen embryos so that another couple can have the chance to become parents.

Days after my hysterectomy, ovarian cancer cast its shadow over our lives once again. Jon’s mother was hospitalized and nearly comatose. As the doctors worked to find out what was wrong, a scan discovered she had ovarian cancer. She passed away the same day. The cancer was not the primary cause, though, and we don’t even know whether she knew she had it. I think about her every day.

Two weeks later, my doctor gave me the ‘all clear’ on my surgery results and on completing five years post-treatment. I am totally cancer free.

Ovarian cancer is often called a silent killer among women, and for good reason. Its symptoms are often mistaken for other, more benign, conditions. By the time it’s diagnosed, it’s often too advanced for treatment to be effective.

I was one of the lucky ones.

We now have a happy, healthy son who is turning three and is the light of our lives.”

This story was submitted to Love What Matters by Mindy Faciane of Baton Rouge, Lousiana. You can follow her on Twitter here. Submit your own story here. For our best stories, subscribe to our free email newsletter.