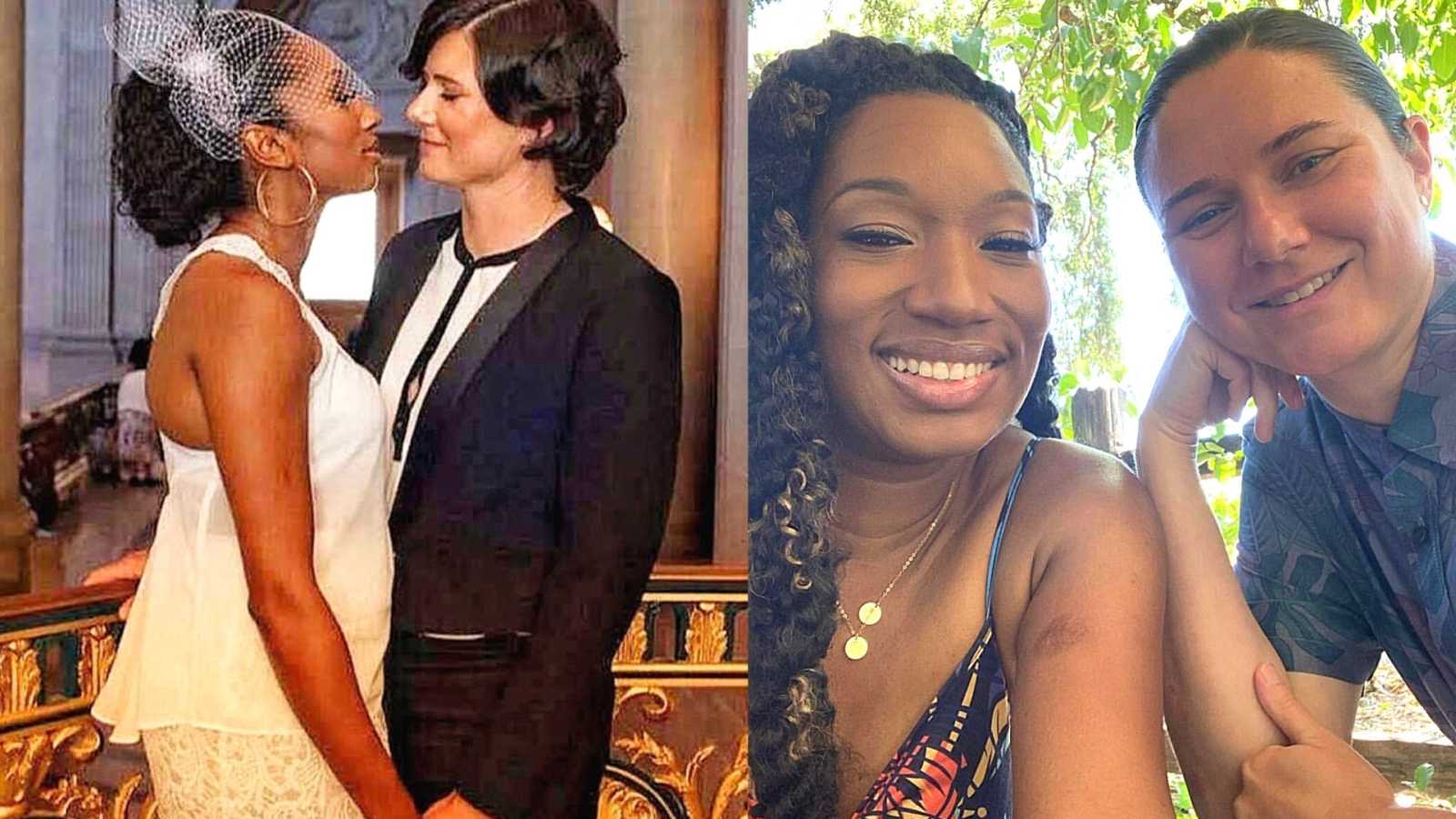 “My wife and I had discussed the idea of starting a family for some time. In the past, she and I had broken up and gotten back together several times which hindered the ‘having kids’ process. However, this time we were newlyweds and in our 30’s. I didn’t exactly want to have children right away, but my wife is four years older than me, and she constantly would say she didn’t want to have kids after she turned forty. I obliged.

A year later, we began the process of educating ourselves on what it took to become ‘lesbian’ parents. We attended a workshop hosted by the California Cryobank. We learned so much that by the end of the workshop we had an entirely different approach on how to conceive a child than than we had planned.

We decided my wife would bare a child first and I would follow soon after.

We both began searching through the online sperm bank. We intently read one profile after another, not wanting to miss any fine detail. Shortly afterwards, my wife began going through medical screening required for clinical insemination, or what is previously known as artificial insemination. During this time, we talked about wanting our children to be close in age. I thought it would be good for us to find a donor for me as well.

One night, as we lay in bed, she excitedly showed me two donors she really liked. I, of course, was attentive and excited too. I also had been looking at donors and shared one I found for myself. ‘What do you think about this one, babe?’ I said to her, hoping she was just as engaging as I had been. ‘My eyes are not that color,’ she replied, meaning the donors eye color was not of her own. Perplexed but conforming, I began to search for another donor. I then said, ‘So, are you going to help to find a donor for me?’ She said, ‘I’m sure you will pick a good one.’ I was crushed, but I said nothing.

Finally, we selected a donor (for her). This guy was tall, handsome, athletic, educated, and healthy. Exactly what we wanted! He had a limited number of vials, so we had to act quickly. I had also learned the donor I chose for me was running low on vials. We checked our funds but we did not have enough to purchase 6-8 vials as recommended. Luckily, we were able to purchase three vials for her, two vials for me, plus six months of cryogenic storage for our sperm. But unfortunately this sparked a major conflict. Not because of the limited finances but because I chose to purchase sperm too.

When we began the initial process for her, it was exciting. She was extremely tense, and I tried to get her to relax a bit. After the first insemination, she lay there on the sterile medical table speechless. Something shifted and this was the beginning of our downward spiral. The next day she said, ‘I’m pregnant!’ I told her there’s a possibility she may or may not be, but we wouldn’t know for 14 days (the two-week wait). My comment sparked a massive argument.

She said I was not being supportive and being pessimistic. I took offense to that because I wasn’t being either. I became very defensive and we had a blow out argument. Because I was so upset, I could not convey that I did not want her be disappointed in case she did not conceive. We barely spoke. It caused so much tension in our home. Fourteen days later, her period came and she learned she was not pregnant. Gloom set in and a black cloud hovered over us.

Cycle two was not immediate. We waited months before revisiting ‘trying’. We met with the fertility doctor to discuss our options to guarantee conception. ‘There is no guarantee’, our doctor explained, ‘But there are other options.’ Our fertility doctor suggested she begin to take a hormone called Clomid to help her produce more eggs. At this time, she was only producing one egg naturally per cycle. We thought the benefits of her taking the hormone outweighed the side effects so we said yes. Also, she had been doing some research on acupuncture and found some testimonials stated it had helped women conceive. We agreed she should try it all. She started treatment immediately. When she was ready for the second insemination, I became nervous. For some reason, I did not think it was going to be healthy for our relationship. Yet, we went ahead.

After insemination two, the tension arose again. She was so stressed that I completely checked out. I wanted to be helpful but we argued about every little thing. It got so bad I did not even want speak to her. We became strangers in our own home. Every word spoken was a pipeline of gas that was ready to burst and combust. Approximately fourteen days later, she got her period. Another failure.

We were down to her last vial. She did not say it, and I’m not sure if she even thought about it, but I knew we needed to have the dreaded discussion of ‘what if it doesn’t work.’ I felt like I could not have that conversation, but I knew we needed to. I felt like I almost despised her, and I’m sure she felt the same towards me. Yet, oddly enough, I felt like I wanted to protect her feelings. I finally found the courage to have that difficult conversation with her, and it sparked another massive argument. She said she wanted to continue to try, but my counter argument was why would we spend more money on vials when there were two vials in storage for me. This put a major rift between us. Our house was no longer a loving environment. Our relationship was suffering and was pretty much on the rocks.

Regardless, she decided soon afterwards to be inseminated the third and final time. I had become so disconnected I refused to go with her to her final procedure. When she arrived back at home I did not even speak to her. All I could think about was that she wanted to conceive so badly, nothing else seemed matter to her, not even our relationship. Approximately fourteen days later, her period came. She had not become pregnant. She was devastated.

All of this happened over a year’s time. I lost faith in us and thought maybe it would be best for us to separate. She did not agree with separation. I remember saying to her, ‘Is this about you having a baby or us having a baby?’ I finally saw a shift in her. I don’t know if it was because of the conversation that took place or if she just felt defeated. Whatever it was, she turned a new leaf. She became inclusive and things settled. I began to open up more. I stopped shutting her out and tried my best to actively listen to her concerns. I learned to become compassionate towards her. I made a commitment to work things out and so did she. After that point, we promised to effectively communicate, to be present, and to continue to love each other unconditionally. We had no idea trying to have a baby could have such an effect on our relationship but I know now it’s common.

We agreed I should try to conceive. If it didn’t work, she would resume. I went through all of the same testing as she had previously received. When I was cleared to try, I did. The first cycle was unsuccessful, yet I did not worry. I believed if it were meant for me to become pregnant then I would. I waited two months before trying again. Once I was inseminated, I rested a bit before continuing with my regular routine. Three days had passed. Then six. Then nine. I began to feel out of sorts. I was tired all of the time, had a massive headache and what seemed like vertigo. I was also craving foods I never ate. My wife said, ‘I bet you’re pregnant!’ I wasn’t a believer yet. I said we would know on day 14.

Day 12 came about and I felt as though I was going to start my period. I told my wife we needed to prepare for her to try again but I was going to just take a pregnancy test just because. I took the test, slipped it back inside of the foil packet and said let’s look at it together in five minutes. Five minutes had passed. I took the test out of the packet and it said PREGNANT (digital test)! This was a joke. This could not have been real. We wanted children. That’s what we signed up for. But now it was actually tangible. We were going to be parents.

She was born healthy and full-term at 38 weeks. We fell in love with her. She was/is the ying to our yang. She is our reason to try a little harder. She is the reason we choose to live authentically. She is the bridge to our hearts.” 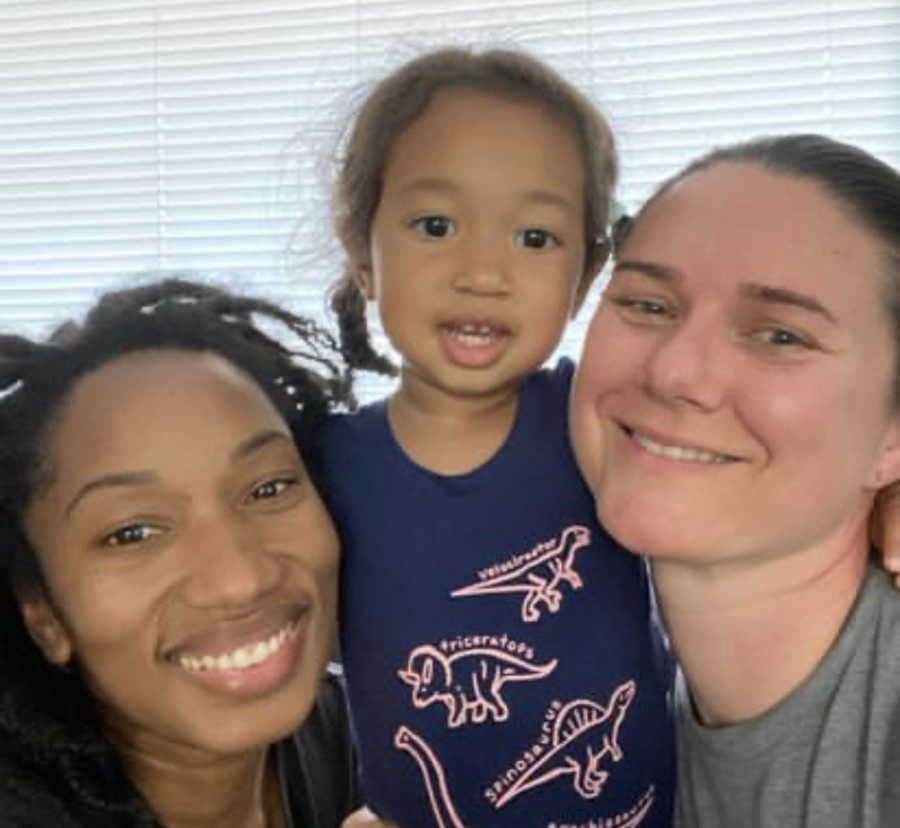 This story was submitted to Love What Matters by Fei and Krista. You can follow their journey on Instagram. Do you have a similar experience? We’d like to hear your important journey. Submit your own story here. Be sure to subscribe to our free email newsletter for our best stories, and YouTube for our best videos.

‘Choose someone tall, give the kid a chance!’ We laughed until it became, ‘You don’t deserve this.’: LGBTQ couple pregnant with rainbow baby, ‘We can’t wait to be mommies’

‘Why does our family look different than families on TV?’ There isn’t one way to be a perfect family.’: Lesbian single mom shares journey

‘We had one egg left, but couldn’t afford it. ‘I can be happy with just the four of us.’ It dawned on me… I never got my period.’: Mom battling infertility welcomes ‘miracle’ twins

‘What do we do now?!’ We NEVER thought kids would be in the cards, but here we were with TWINS!’: LGBTQ couple inspired to become parents after mom’s passing, have twins through surrogacy

Do you know someone who could benefit from this? SHARE this story on Facebook and Instagram to let them know a community of support is available.