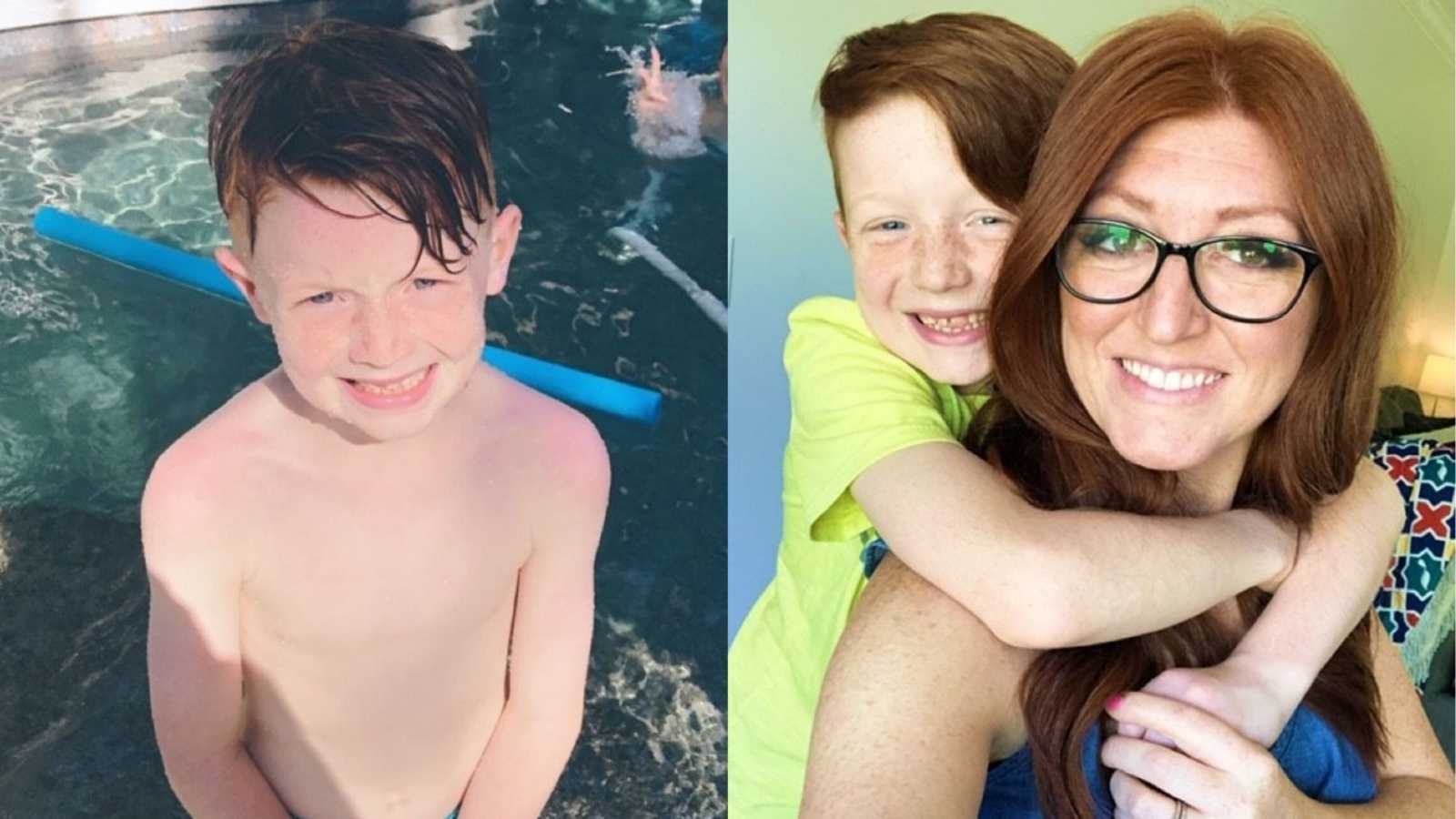 “Swimming is a favorite childhood pastime of mine, but it’s something my husband and I have yet to fully enjoy with our kids. Don’t get me wrong…we have fun when we’re at the beach or in a pool, but there’s always underlying stress when we’re around water because our kids just aren’t strong swimmers. Our 5-year-old daughter, Macy, had one session of swim lessons when she was 4 and she’s fearless with her puddle jumper on, but without it, she really has no solid swim skills that would serve her if she were in water over her head. Our 8-year-old son, Camden, has had a couple rounds of swim lessons and he can swim well in the shallow end…even putting his face in the water and alternating breaths and arm strokes…but if he’s in an area where he can’t touch, he panics.

Thankfully I know this about him – that he has the skills – but the mental block of being in deep water is something he hasn’t quite overcome. I know he needs watched closely.

It was Memorial Day weekend and a sweet friends of ours were hosting an end-of-the-year pool party. I’d say there were 6-8 families present with a total of 13-15 kids. The dads sat in chairs at the shallow end and the Moms sat under the shade in a cabana near the deep end. Our wonderful friends who hosted the party hired a lifeguard for the day to make sure everyone stayed safe. There was food, drinks, music and plenty of adults around…it was a perfect pool party!

As we chatted with the other parents, my husband and I watched both of our kids like hawks and I paid special attention to Camden as he was swimming all over the pool – even in the deep end. He had a floaty toy ring linked around his elbow as he swam around the deep end and I was happy he was going for it because I know he knows how to swim…but he just needs more practice to gain confidence. He was doing great and that little ring wasn’t doing much, but I knew it was like a security blanket for him.

I got up to get some snacks and when I came back, both kids were laughing and playing with their friends. All good!

A few minutes later, I scanned the pool and didn’t see Camden. I asked my friend who was sitting closer to the pool if she saw him.

He had just gotten close to the wall and the pool cover was blocking my view. All good! He swam back into my view and I watched him closely as he swam to the other side of the deep end, then pushed off the wall and started to swim back to the shallow end where 2 of his friends were calling him to come play with them.

At that point, I noticed he let go of the ring he had been swimming with and I was surprised he would let go of it in the deep end. I know for sure this was God nudging me…all of a sudden, I got this urge to stand up and walk up to the edge of the pool. I saw him in the middle of the deep end and he bobbed up and down quickly, and he started to spin in a circle. I called his name & for a second, I thought he was just being goofy. His arms were moving fast but quietly under the water and he didn’t answer me. When he got his face above water the second time, he didn’t say anything, but I could see a look of terror in his eyes and at that point, I jumped in the water fully clothed, swam under him, and pushed him above the surface as high as I could.

As soon as I went under the water, I had this split-second thought of, ‘I really hope he wasn’t just playing around and I just totally embarrassed him in front of his school friends!,’ but when I got him over to the edge, he immediately started sobbing. My husband ran over and pulled him up out of the water and said, ‘What’s going on?!’…he hadn’t seen me jump in the water but all of a sudden realized I was in the pool fully clothed. All I remember saying is, ‘He was drowning.’

The 3 of us sat on a pool lounger and my husband and I hugged him and consoled him as he cried. Thankfully I saw him at the very beginning of his struggle and I got to him before he was at the point of swallowing a lot of water. When he came out, he wasn’t really choking or coughing…but he was absolutely terrified, and he kept asking to go home.

My friend took Camden and me inside to give me some dry clothes and to give him a little break from the noise of the party. He hugged me and said, ‘Mom, I just keep thinking that today could’ve been my last day.’ Cue all the Mom tears. I hugged him and told him I was sorry if I embarrassed him in front of his friends and he said, ‘Mom! Don’t be sorry! You literally saved my life. I’m so glad you jumped in.’ More tears. From both of us.

I’m sure if I had waited a few more seconds, the lifeguard would’ve seen him and jumped in for him, but when I saw him struggle, my Mom reaction kicked into high gear and I jumped in without even thinking about it. This has served as a great reminder to me that one person can’t watch 15 kids at the same time. I’m not upset with her and I know it was God that nudged me to stand up and walk over to the pool. I know now more than ever that I can’t ever let my guard down when my kids are around water!

We went back out to the pool party and he bravely got back in the water and stayed in the shallow end…but I’m so proud of him for getting back in.

Over the next few days, there were lots of tears and prayers and tender moments between us. He would randomly walk up to me, hug me so tight and say, ‘I love you, Mom.’ We had such a heart connection in those moments and it still brings me to tears to think about that day and those days right after.

I wondered if he’d be embarrassed by me sharing his story. I wanted to make sure I had his permission and when I told him about the possibility of a lot of people reading about what happened, he said ‘Mom, if you talk about what happened and it helps just one kid stay safe, that would be awesome.’

I encourage you to be hyper-vigilant when you’re around water…whether with kids or adults. Whether there’s a lifeguard or not. Drowning doesn’t look anything like it’s been portrayed in the movies. It isn’t loud, or crazy, and typically there’s no yelling for help. I asked Camden if he tried to yell and he said he wanted to scream but he felt like his voice was locked up. As I’ve read more facts about drowning, I’ve learned that when your body is in that state, all your energy is going to your breathing, and your voice is basically muted. Drowning is silent, and it most commonly happens right in front of well-meaning, wonderful, responsible people who would do anything to protect their loved ones. I know that tons of families haven’t had the same outcome as we did, and my intention is not to deepen the pain anyone is feeling from the loss of a life. My sole intention in sharing this is to do just what Camden said…to help even just one kid stay safe.”

This story was submitted to Love What Matters by Christina Adam. You can follow her journey on Instagram. Do you have a similar experience? We’d like to hear your important journey. Submit your own story here, and be sure to subscribe to our free email newsletter for our best stories.

‘I only bought 2 backpacks instead of 3. I naively thought I was ready. But grief proved me wrong.’: Mom feels ‘paralyzed’ while back-to-school shopping after losing son to drowning accident