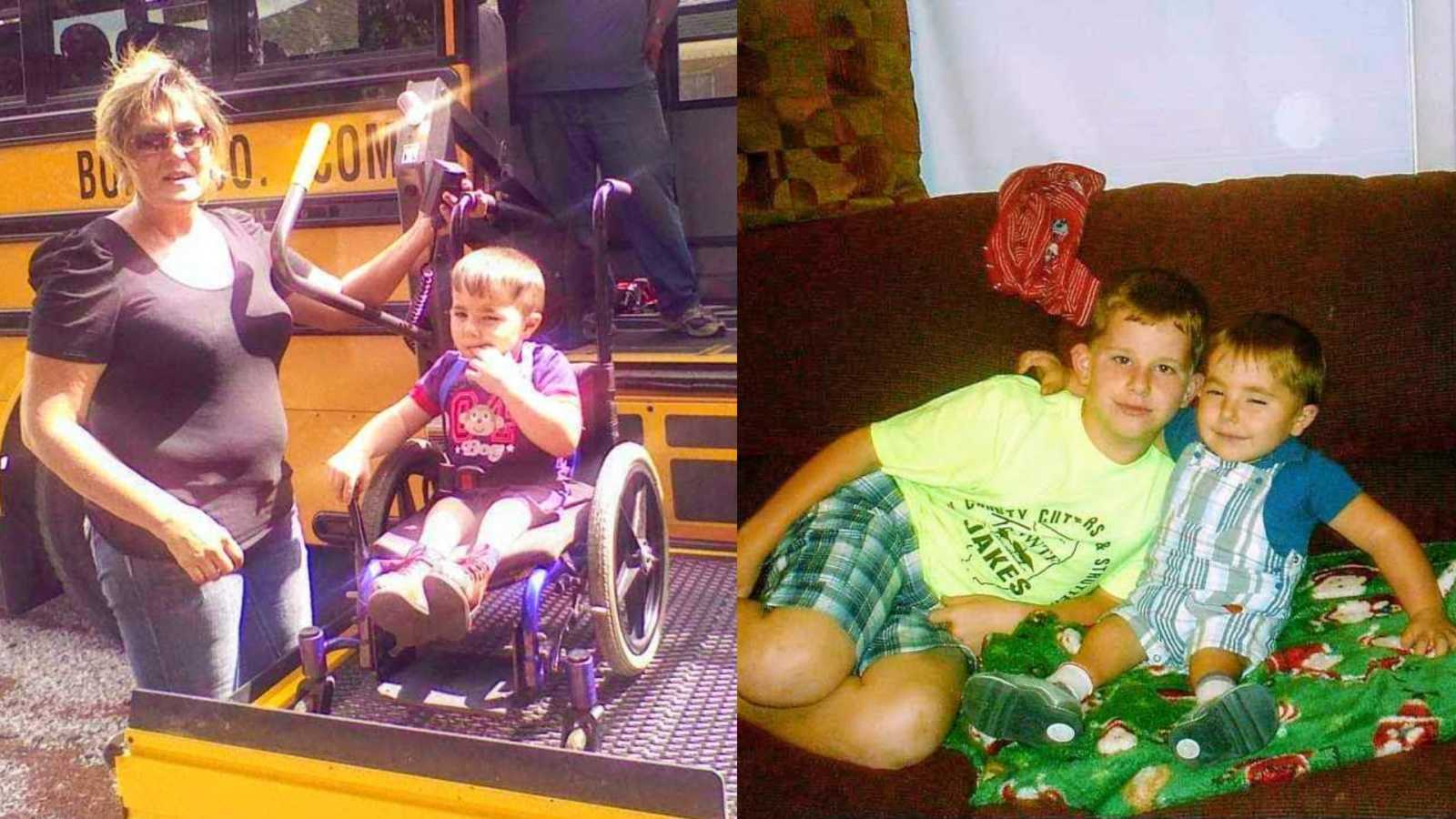 “Eleven years ago, I was scheduled to have surgery on my right foot. I tore tendons in my big toe and needed to have metal hardware placed in order to correct it. Prior to surgery, I told my nurse, ‘I know it’s too early to tell, but I’m pretty sure I’m pregnant.’

They did a urine test and the results came back negative, so the surgery proceeded. I had a cast from my toes to my thigh. A week later, I was in excruciating pain. It felt like my leg was about to explode. I returned to the hospital where they removed the cast and performed an ultrasound, only to discover a blood clot deep behind my knee. I was hospitalized for 3 days and needed shots of Heparin to break it up. After more blood tests were given, my prediction came true: I was pregnant!

‘You’re high risk,’ the nurse told me. Not only did I have a blood clot, but Type 2 diabetes. I was referred over to a Dr. Kell, a top-ranking OB who specializes in diabetic pregnancies and wonderful person. He was very open and honest about everything he did. At 26 weeks pregnant, he told me, ‘Your baby has twisted, clubbed feet.’ The birth defect was not uncommon in our family, and we made plans to correct it when he was born.

We learned that clubbed feet is a common warning sign for another birth defect called Spina Bifida where the spine and spinal cord do not form properly. When we went to get it checked out, the neurologist said, ‘I can’t get him to cooperate so I can see his spine, but I’m sure he’s fine!’

My pregnancy progressed easily and I scheduled a c-section at our local hospital as my due date neared. When my beautiful boy Tanner was delivered as scheduled, my doctor looked back at me and laughed. ‘He’s short like you!’ I was relieved and assumed everything looked normal.

After they settled me into my recovery room, the doctor came back in to talk to me. ‘Your son scored high on the Apgar test, but there seems to be something going on with his legs.’ He didn’t know what was wrong, so he called the children’s hospital to describe what he was seeing. Shortly after, he was picked up in the NICU ambulance for testing. I was nervous beyond belief.

I was stuck in the hospital for two days due to my c-section. My doctor warned me not to drive, but I knew I’d be heading straight to the NICU to see my son. When I arrived, they weren’t able to tell me anything as they were still running every test possible to seek a diagnosis. Then, suddenly, we got a phone call, and a diagnosis. ‘Your son has Caudal Regression Syndrome (CRS).’ I was told that 1 out of every 75,000 children are born with it.

Tanner’s legs were literally sticking straight up in the air, unable to bend. He had one bone in each leg and his feet were severely tiny and clubbed. He was also missing his tailbone and all of his sacrum. His spinal cord was shorter than usual and he was born with a micro bladder. I was heartbroken. All I could think about was all of the things he would never be able to do.

But when I looked around at the sea of children in the NICU, I quickly tried to rid myself of these thoughts. Tanner was the only one who didn’t have any tubes or leads hooked up to him. He was healthy and I thanked God for sending him to me. I still remember his nurse saying, ‘Special babies have extraordinary mothers.’ I will always be grateful for her kind words.

After a week, and many appointments later, I was finally able to take Tanner home. The doctors had tried to get his feet straightened but were unsuccessful. So, I found a place that made custom shoes.

Through all of the appointments and craziness, my oldest son, Jacob, was an angel. I was worried he would be jealous of a baby, but he absolutely loved his little brother. He was 6 at the time Tanner was born. He never once complained about all of the appointments and time I was unable to spend with him. In fact, Jacob was very protective of Tanner and still is to this day. When Tanner got his first wheelchair at age 2, Jacob yelled at a lady in Walmart who was staring long and hard. He said, ‘What’s wrong? Haven’t you ever seen a kid in a wheelchair?’

Life with a special needs child can be more stressful at times. All of the appointments and therapy sessions can be overwhelming when added to daily life. One of the biggest challenges is trying to educate people about your child’s condition. I’ve lost count of the number of times a parent has told their children, ‘Stay away from that child.’

Worst of all is seeing how many people automatically assume kids are mentally disabled just because they’re in wheelchairs. I can’t tell you how many strangers talk to him like he’s slow. I wish you could see the looks on their faces when he shuts them down! Tanner has been blessed with an extremely high IQ. In second grade, he was tested and showed he was reading at an 11th grade level.  I know he will do great things someday.

Tanner is a very happy child, but there are moments when depression hits him hard. Once he asked me, ‘Momma, why can’t I walk like the rest of my friends?’ I told him that God made him special for a reason, and while we might not understand it now,  we will eventually. I tell him how he is able to do a lot of things other kids can’t do. He has ridiculous upper body strength and a core strength that professional body builders would be jealous of.

Tanner is very small due to CRS. He is 10 years old but is the size of a 3-year-old. None of his doctors can tell us how big he will be, or if he will grow anymore. I know the older he gets, the harder social situations will be for him. I’m grateful he has such an outgoing personality and a wonderful group of friends.

My life hasn’t been picture perfect, but I wouldn’t trade it for anything! I have 2 wonderful kids and an awesome husband who treats them like his own.

There have been some rough times, but even more wonderful ones. I’m thankful for my children and can’t wait to see what’s next.”

This story was submitted to Love What Matters by Charity Quick of Greenville, Illinois. Submit your own story here, and be sure to subscribe to our free email newsletter for our best stories. 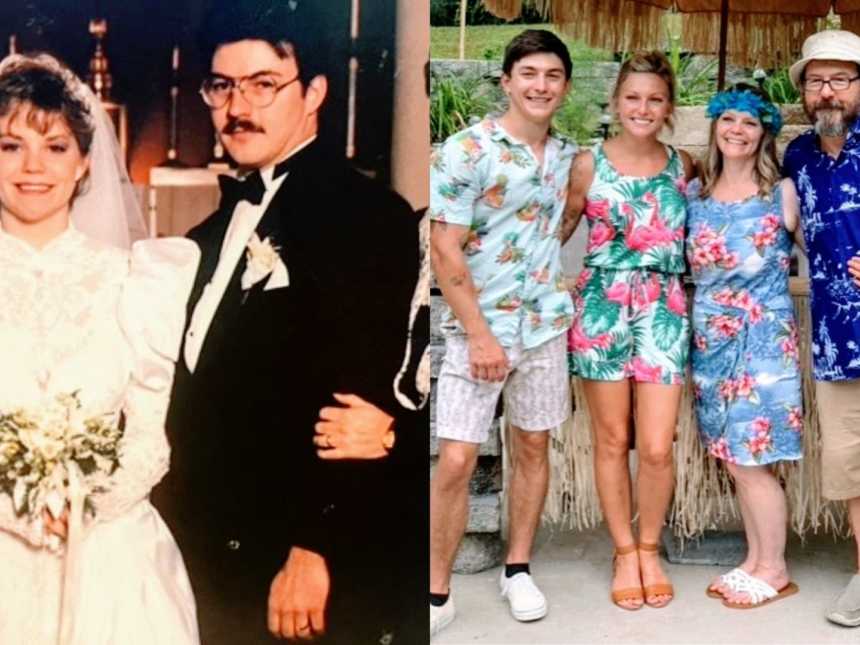 ‘They both knew deep down they never stopped loving each other.’: Parents remarry in surprise wedding after 18 years divorced, dad sober 7 years

“My mom turned off the music and told everyone to sit down. ‘In order for this party to start, I am going to need a couple bridesmaids and a best man.’ My jaw dropped.”