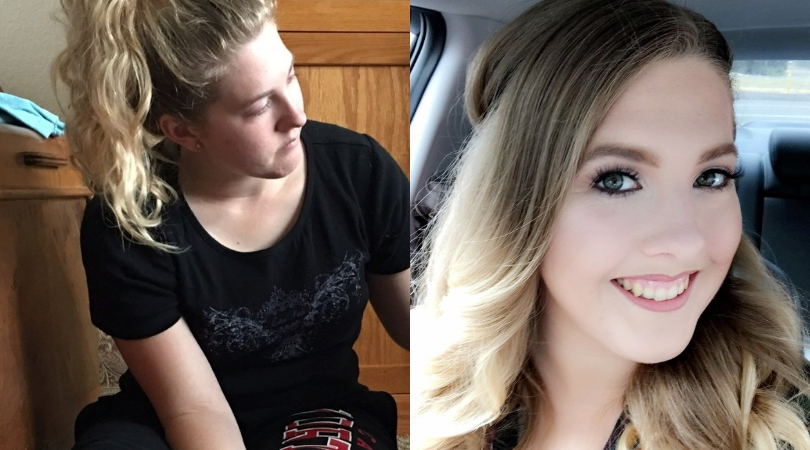 “Growing up, I was one of those annoying students who got good grades without needing to study. I just did well in school. Consequently, I was also a perfectionist. I had some anxious tendencies but nothing unmanageable. I graduated high school and breezed through my first few years of college at CSUN as a Deaf Studies major until I got accepted to the prestigious sign language interpreting program. It is the top program on the west coast. They only accept 24 students every year and over 100 apply. On top of that, if you aren’t progressing like they want you to, they will drop you from the program. And you can only apply to the program twice! So even just the application process was nerve-wracking. I was ecstatic to be accepted because I have been working towards this program since the 7th grade (again, perfectionist/over-achiever here).

Within the first 2 weeks of the program, I failed a test. And not just a ‘perfectionist fail’ like a B or a C. I flat out failed; we’re talking a 46% fail. That basically added a truck load of self-doubt into my brain. I started panicking about being dropped from the program. On top of that, I had always been the person who picked up new skills with minimal effort. But trying to teach my brain to think in two languages simultaneously was not coming easily. I began having breakdowns in class during interpreting simulations. No one else was breaking down in tears in class, so I assumed I was the only one struggling. I became convinced I was going to be dropped and started having panic attacks.

After this had been going on for a month or so, I finally worked up the courage to call my mom and tell her about these attacks. She suggested I visit the school counselor and also see my primary care physician to see about getting some sort of prescription to help mitigate the attacks when they happened. So I made appointments.

The school counselor told me, ‘Oh you’re just used to being the perfect student all the time. Welcome to everyone else’s world.’ My doctor treated me like I was a drug addict for asking for a prescription and reluctantly gave me one supply of Xanax. She accompanied that with, ‘Don’t ever ask me for this again because I won’t keep giving it to you. If you can’t handle the program, you need to drop out and find a new dream.’ I walked away from these appointments feeling like I just wasn’t good enough and needed to shut up and deal with my anxiety on my own.

I tried to shut down my anxiety for over a year until I was having panic attacks almost daily and needing extensions on every paper. Finally after making and cancelling numerous appointments with a psychologist, my then boyfriend (now husband) drove me to the appointment and sat with me in the waiting room to make sure I didn’t leave. I was convinced the psychologist was going to treat me the same as my doctor and school counselor did. But she didn’t. She listened and talked me through my fear of going on medication. I started on Lexapro and the difference was amazing. My first day on it, Jared commented it was the first time he had seen me happy and unstressed in over a year. I still had anxious days, but the panic attacks were few and far between. I graduated the program this past May and married Jared in August. Now that the stress of the program is over, I have been off my Lexapro since the wedding. I still have anxiety but I’m learning to manage it better. And I just came up with the greatest analogy for how my brain works.

My brain is like a front load washer. Most of the time it handles all the different loads I throw at it with no problem. It even handles the heavy loads really well. That’s what it’s designed to do.

But sometimes my brain forgets which settings it needs to use. Sometimes even though it’s just a light load, my brain puts the washer in a heavy spin cycle. It gets going so fast that everything is a blur. I can tell there are clothes in it but they’re moving too fast for me to process the individual pieces. I might see a streak of blue and think, ‘Hey, that might be my favorite shirt. But then again it might be my jeans. Who knows.’ I can’t tell until the spin cycle is over.

Sometimes when it’s spinning too fast and I can’t see the individual thoughts clearly enough, I open the door so that everything slows down. Just like opening a front load washer mid spin cycle, my thoughts come flying out. One at a time, really fast! But one at a time. And then the rest of the clothes slow down, and I can sort through them.

But sometimes my brain malfunctions. The washer goes in to a heavy duty spin cycle and there aren’t even any clothes in it. But my brain thinks there are. And it tells me it’s just spinning too fast and so that’s why I can’t see the clothes. But if I open the door, nothing flies out. Because there is nothing there. The washer just doesn’t want to stop spinning.

Quite often, regardless of whether there are any clothes in the washer, I need help opening the door. And I need someone to catch all the clothes that fly out and help me sort through the rest so I can restart the washer on the proper settings. And when there are no clothes and the washer is just spinning for no reason, I need someone else to be there when I open the door and confirm there’s nothing flying out and nothing inside so that together, we can convince the washer to stop going at warp speed. Because sometimes my washer only listens to voices that aren’t mine.

So if you’ve ever been that person for me, thank you. Thank you for helping me with the flying clothes and warp drive spin cycles. Thank you for not just looking at my washer and telling it to slow down or to not stress/worry. My washer and I really appreciate it.”

This story was submitted to Love What Matters by Katelyn Alviani, 23, of Santa Clarita, California. Have you suffered with anxiety and have a similar journey? We’d like to hear your story. Submit your story here, and subscribe to our best stories in our free newsletter here.

Do you know someone who could benefit from this story? SHARE on Facebook to make them aware a community of support available.