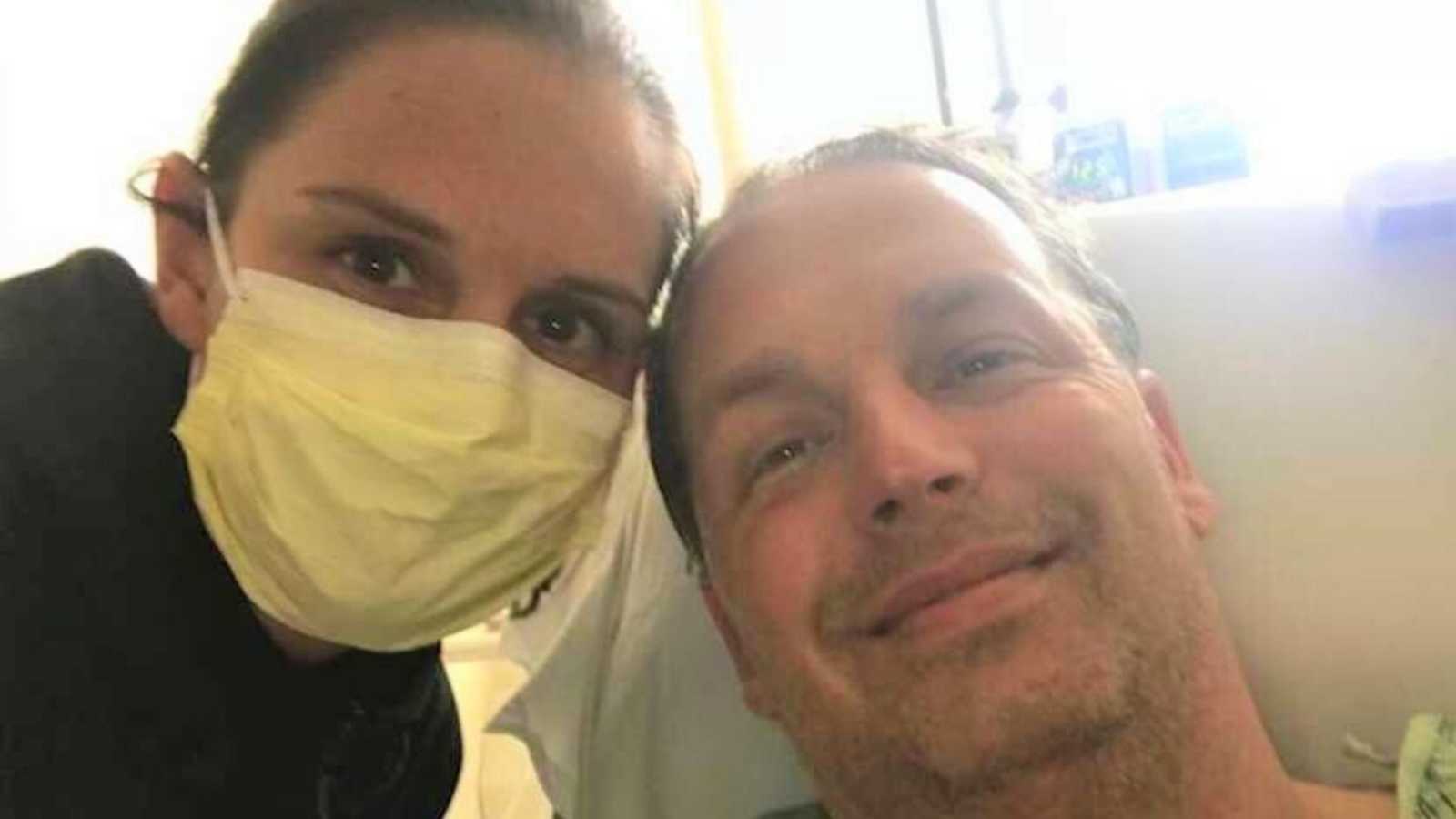 “My husband went in to cardiac arrest while at the gym.

I went into the Y earlier in the morning than Kevin and he was going to drop off our youngest daughter Ivy at our local high school for a cooking class and our oldest daughter Ramona would stay home, sleep in and have some time to herself until we would be home from working out roughly 2 hours later. Kevin came into the workout class I was in and was messing around with me and my girlfriends after he arrived at the Y. He gave me a smooch and said, ‘I would have loved to stay home but I’m here and I’m going for a run.’ I said, ‘I’ll be in by you as soon as I’m done.’ About a half an hour later one of my friends in the class stepped out to use the bathroom and saw a bunch of commotion going on. She went to see what was happening. As soon as she stepped into the workout area where the treadmills are, another friend saw her and said it was Kevin! My friend came and grabbed me in class.

All I remember was my girlfriend telling me, ‘Kevin collapsed and had a heart attack.’ I ran into the workout area and saw about 50 people around my husband on a gurney with an oxygen mask on. He was flailing uncontrollably all over the place. I was in absolute shock. He is as healthy, very active 41-year-old man that works out all the time. I had just seen him, joking around with me 30 minutes ago, and now he’s lying on a gurney. Thank God by the time I got in there they had already given him CPR and shocked him with the AED so I didn’t have to see him unconscious and turning blue. Thank God for the immediate action of the people working out, the employees and the first responder so he was only without oxygen for roughly 3-5 minutes, according the people that were in there.

At this point they proceeded to get him into the ambulance and to the hospital. The entire way he was completely combative and mentally was not himself. The nurse in the E.R. told me to wait in the family room and the doctor would be in shortly. Finally, the doctor came in after what seemed like an hour and explained they have no idea what happened, but Kevin had gone into cardiac arrest and because he was without oxygen so long, his brain would not connect with his body. He was so combative they sedated him and were asking me all sorts of questions like did he take drugs, does he have seizures, is he diabetic? All of which were no. They were doing more tests to figure out what was going on, but we could finally go in and see him. I was speechless and felt helpless. Thank God my mom was with me because I couldn’t believe my eyes. He was still slightly flailing; his eyes were rolling in the back of his head and he had a trach down his throat. So many wires and monitors were hooked up to him. (Little did I know the tubes, wires and machines would only get worse.) After other doctors came in to help figure out what happened they decided the best option at this point was to put him in to a medically induced coma for at least 2 days. 24 hours in hypothermia and 24 hours to warm up and see if he would regain his full mental capacity after the loss of oxygen. We would just have to wait and see if he would wake up in 2 days – or it could take longer, it all depended on his body. I was in complete shock and couldn’t believe this was happening.

Kevin was moved from the E.R to the ICU where he would remain in a coma for the next few days. After an hour or so a pulmonologist doctor came in to the family room. He began asking questions about what was in Kevin’s stomach and I said, ‘Why?’ He said, ‘When we intubated him, a bright lime green slime came shooting out of his mouth.’ My mind went blank. I had no idea what he could have possibly eaten or taken as I wasn’t with him in the morning. Then I remembered he would sometimes take a pre-workout drink before the gym, but I had no idea what that would have to do with any of this. A lot of people take pre-workout shakes and drinks and are perfectly fine. She said they needed to know exactly what he had taken and what was in it. I had our neighbor go to our house and take a picture of the packing and label on the cannister. After a while she came back and said the ingredients in the drink didn’t seem to be the culprit, so they were going to continue to do tests on all his organs and his heart over the next 2 days.

Moving forward 2 days Kevin started waking up earlier than expected. He was still extremely combative, so they had to keep sedating him and would slowly keep trying to wake him up. I can’t imagine how scary that had to be for him to be running on a treadmill one minute and the next thing you know you wake up in a hospital with tubes, wires, needles, machines and people standing over you, telling you to calm down and relax. Eventually about 2 hours later he was alert and awake and could nod his head yes or no if we would ask him questions. He still had the tube in his throat. He was also able to move his arms and legs around as well, which was all a fabulous sign. After the tube came out, he was able to talk and told us the last thing he remembered was being at the Y on the treadmill. He was bruised and scraped from all the flailing and combativeness but otherwise was not in any pain. We were so grateful he was totally himself and that he would be ok.

He remained in the hospital for a total of a week. After more tests and a heart cath, they eventually inserted a permanent AED they felt would be the best option for him, as they still had no answers why he went into cardiac arrest that day. The consensus from the cardiologist(s) and the electrical physiologist who put in his AED, was that his heart was overworked and couldn’t handle the amount of excess caffeine and other stimulants that were in the pre-workout drink he took. They said it was the perfect storm! He was dehydrated, had no electrolytes and no sodium in his body the day of his event. The pre-workout drink put his otherwise extremely healthy heart over the breaking point and into cardiac arrest.

At this point it’s been 8 months since his event and he has had zero incidents with his heart, which is monitored and recorded all the time thanks to his AED. His doctors have told him absolutely no energy/pre-workouts ever again. We are so very blessed, lucky, grateful and thankful that Kevin was where he was that morning and that there were people there who responded so quickly. We’ve been told repeatedly, especially by people in the medical field, how lucky he is and that he’s a walking miracle. Our story could have ended so differently. Sometimes we forget it happened just under a year ago – when we’ll be doing small things, like carving pumpkins with our kids, and we both have overwhelming feelings that we have been so blessed he is still here with us.”

“It was just another day. I was hitting the gym and tackling my day. However, that wasn’t how it turned out. Since my event, I have an internal defibrillator, most importantly, the doctor’s stressed to stay away from all energy drinks, pre-workouts etc. and to watch my caffeine intake. I’m truly blessed in the fact it happened where it did and having not only the correct people to help, but an AED to save my life.

While I was in recovery, friends that came to visit mentioned other stories they had recently heard about energy drinks. Soon, while I was home recovering, I started searching the internet and found out I wasn’t the only one. Several people, healthy people, weren’t as lucky as I was.

As a father of two beautiful daughters and husband to an amazing wife, I am truly blessed to be here writing this and I want people to be aware of the dangers of these drinks. Of course, it’s easy to think you are invincible, until you clinically die and come back. All because of a drink!”

This story was submitted to Love What Matters by Daphne Buxman-Carley and her husband, Kevin Carley. Have you had a similar experience? We’d like to hear your journey. Submit your own story here, and subscribe to our best stories in our free newsletter here.

Read another wife’s emotional story about losing her husband to energy drinks: