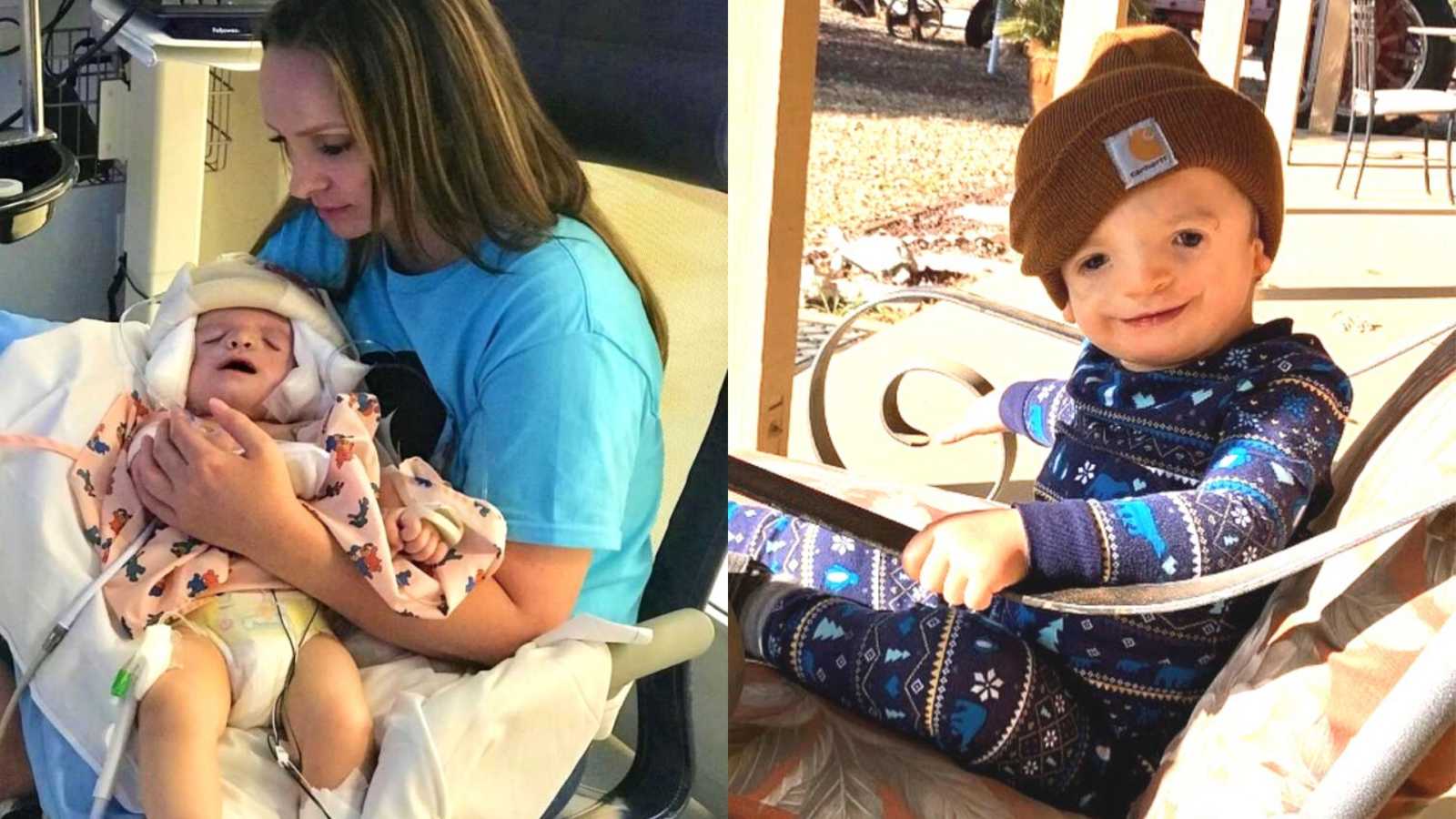 “FINALLY!!! I was induced because of severe polyhydramnios (an excess of fluid in the amniotic sac), and FOUR days later, PJ  came out! His dad and I were both crying with joy and relief. They put him up on my chest for the first time.

The doctors and nurses did a double take and immediately took him back. Being our first baby, we were so confused as to why they would take him back. We hadn’t even seen him yet. What was wrong? They kept him in the room for a few minutes, as dozens of people were rushing in and out. And then everyone rushed out with him.

Treacher Collins Syndrome causes underdeveloped facial features which can range from moderate to severe and can affect breathing, eating, hearing, and sight. To state it in a politically incorrect way, it causes deformities of the face.

We spent the first 65 days of PJ’s life in the hospital. We celebrated Christmas, New Years Eve, my birthday, and Valentine’s Day while living in the NICU with PJ. He had two surgeries there before we were allowed to bring him home.

Now, at the age of 2, PJ has had a total of 5 major, medically necessary surgeries which have enabled him to breathe, eat, and grow normally. And he will need more medically necessary surgeries in the future. But he will still look different. His ears, face, and eyes will still look different. I think he’s the most beautiful boy I’ve ever seen, but I fear how he may be treated by other kids when he starts school.

When PJ was born, there was a movie in theaters called ‘Wonder,’ based on a best selling novel. It is about a fictional character named Auggie Pullman who has the same condition as PJ. It is told from Auggie’s point of view as he starts fifth grade and endures horrible bullying for looking different.

I went to the theater and saw this movie when PJ was 15 days old and still in the NICU. All of my fears and hopes for PJ’s future were embodied in this young character and his story! This incredible book/movie started the ‘Choose Kind’ movement and is now widely read in elementary schools to combat bullying and encourage kindness and inclusion.

I realized we have an incredible opportunity to spread kindness by having PJ visit schools that have read Wonder. Meeting a real-life Auggie Pullman helps bring the book to life and expose the children to differences. With the hope of influencing future generations to be kinder and more tolerant of differences, we have become certified motivational speakers with the Children’s Craniofacial Association and volunteer to speak in schools which have read Wonder.

While speaking in schools, we also incorporate fundraisers to raise money for various non-profit organizations that help children, like PJ, who have excessive medical expenses. We call these fundraisers ‘PJ’s for PJ.’  For a small donation from each student, the kids are allowed to have a pajama day while we discuss kindness, inclusion, and acceptance. So far, ‘PJ’s for PJ’ fundraisers have raised and donated over $65,000!

My hope for PJ’s future is that the world will be a kinder and more accepting place where people can learn to look past his differences and see him the way I see him. I hope PJ learns to advocate for himself in such a positive way people will not see him as ‘the boy with Treacher Collins,’ but rather, ‘the boy who speaks in schools, encourages kindness, and raises money for other kids.’

If you are interested in having a Certified CCA Speaker visit your school, please contact www.ccakids.org @ccakids.”

This story was submitted to Love What Matters by PJ’s Playhouse. Do you have a similar experience? We’d like to hear your important journey. Submit your own story here. Be sure to subscribe to our free email newsletter for our best stories, and YouTube for our best videos.

‘I swallowed my own tongue and went blue. One week into school, the bullying began. ‘Why should I be moved and not them?’: Teen with Treacher Collins Syndrome urges ‘we are all unique and amazing in every way’

‘Why isn’t anyone congratulating me? Sadly, my daughter’s arrival wasn’t celebrated.’: Woman gives birth to baby with Treacher Collins Syndrome, ‘our normal is different but I wouldn’t change it for anything’