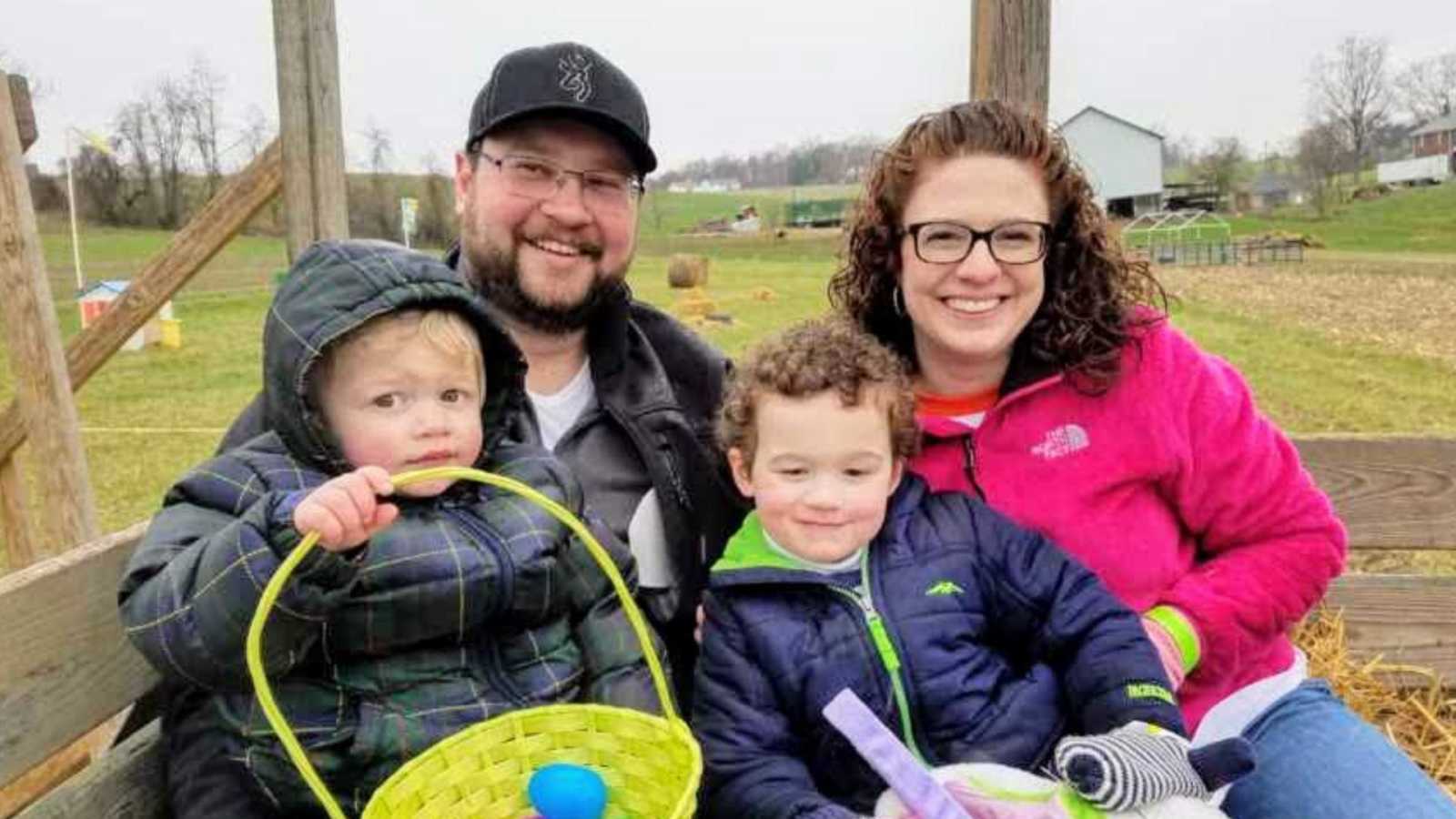 “Our society has made the word ‘suicide’ a dirty word. Something people know exists, but no one can bring themselves to say out loud. The problem with that way of thinking is while we are being silent, people are dying. These are real people — brothers, sisters, husbands, wives, mothers, fathers, people’s children. It’s silence with deadly consequences.

We had been married for almost six years when I began to notice things weren’t quite right. He became much more withdrawn, agitated, and was drinking more heavily. I could see he was battling something, but despite my questioning, he wouldn’t open up to me.

As his behavior became increasingly erratic, it put a bigger and bigger strain on our marriage. The more I tried to intervene, the more he withdrew until I gave him an ultimatum — he needed to get help, or I needed a divorce.

It was a night that would change my life forever.

I can’t tell you many details about that night. I don’t know what I was wearing, what the weather was, but I do know something jolted me awake sometime between midnight and 1 a.m. I’m not sure what it was, but as soon as I woke, I knew something was terribly wrong. That night I had been sleeping in the bedroom and he slept downstairs, so when I woke up, I immediately went looking for him.

I searched the house room-by-room and when I got to the office, I saw it. The door to the gun safe was open. The safe was never open. There was a note on the desk. Immediately, I knew what sort of Hell I was about to experience.

I knew what I was going to find but at this point adrenaline and sheer panic set it. I had hoped maybe I would find him in time to stop him from doing what I knew he was going to do. When I found him, I felt as if I had a complete out of body experience. I remember screaming in my backyard, crying to the 911 operator, checking him for a pulse I knew wouldn’t be there. However, it was as if I was watching someone else going through these motions and it wasn’t me.

I vaguely remember sitting on the couch in my home as the deputy coroner asked me endless questions regarding my husband’s mental state before the suicide. He asked about our marriage. He asked about his erratic behavior. I answered the best I could, but I kept fixating on the literal blood left on my hands from checking for a pulse and feeling like I had caused this by asking for a divorce. Even as I washed my hands and watched the blood go down the sink, I still had this sense of guilt there was something I could have done.

When my husband died, I was a stay at home mom to my two young boys. I had a bachelor’s degree and a master’s degree but hadn’t worked in the traditional sense for over four years. Almost immediately, the economic consequences of suicide hit me. I was still reeling with grief and suddenly found myself left without health insurance, a steady income, and since the suicide happened at home, a house we could return to.

Those following weeks and months became a dizzying maze of navigating different social service agencies as I applied for healthcare through the Health Insurance Marketplace, enrolled the boys in CHIP, and applied for childcare assistance. This is all while navigating the seemingly endless number of things that must be handled when a spouse dies.

All through this, I’m putting on a brave face for my boys. They had been through so much; I didn’t want them to see mom break down. When you lose someone to suicide you need to make sure to take the appropriate time to grieve and to heal. What I didn’t realize was I wasn’t taking care of my own needs. I began feeling depressed and isolated. Even though I put on a happy face in public, I began to feel my life lacked purpose. Inside, I was drowning.

They say when you are on an airplane and there is an emergency you must put on your own oxygen mask first because if you pass out you won’t be able to help anyone else. Two years after my husband died, I realized I had never put on my mask.

So, I decided to go back to work.

Starting out in the field, I had hoped perhaps I could help a few people with my story and my experiences. I never imagined it would help me find my voice as well.

In addition to my role as Mental Health America at Southwestern PA’s Director of Development, I also assumed the role of coordinator for Ray of Hope, which is Westmoreland County’s suicide awareness and prevention taskforce. I traveled to Harrisburg to be trained as a trainer in Q.P.R. (Question, Persuade, Refer) which is an evidence-based suicide prevention protocol.

I began sharing my story with strangers who had lost loved ones as well; encouraging those struggling with suicidal ideation; making myself available if anyone knew anyone that needed help. I was always the first person to respond on Facebook or via text if anyone had lost a loved one or needed resources or support.

I was angry at my husband for leaving us. I still felt like I had blood on my hands. It took me a long time for my anger to subside and understand him and heal myself. Although what he did was a horrible thing, it wasn’t necessarily because he didn’t love me or my sons, but he was experiencing something bigger and more complex than himself — mental illness. He may not have wanted to die but simply wanted to pain to end. Now instead of seeing him as a person I am angry with, I meet his memory with sympathy. I also realize this knowledge I have gained is a gift I can share with others.

Eventually, I began advocating more publicly to raise awareness about suicide. I tell my story. I talk about the resources that currently exist and plead for funding to make additional resources a reality particularly for children.

What many people don’t realize is children are often the lost victims of a suicide epidemic. The emotional toll on them when a parent completes suicide is enormous. The problem is there aren’t enough therapists who specialize in this very specific type of trauma, and if they can find a therapist, parents are usually faced with long waiting lists and insurance hurdles.

As a mom, I am left to advocate not only for myself but also for my children because I feel if I don’t advocate for them, who will? The alternative scares me.

I’m still haunted by the fact I didn’t recognize the warning signs when it came to my husband. That blood on my hands wasn’t ever my guilt to carry, although many suicide loss survivors feel that way. The truth is, I didn’t know he would react the way he did and I didn’t know the warning signs, which is why I’m now on a mission to educate everyone I know — because you never think it will be you until it is.

It’s been a long four years since that April night, and in that time I have experienced hope and healing beyond my imagination. I realize despite what I’ve been through I’m not a victim, but a warrior. I’m fighting back against this disease. I wear a semicolon tattooed on my wrist to remind me that my story will never be done being written. I’m fighting for those who, like my husband, we’ve lost; those like my sons, who are at risk; and those that don’t know yet of the need to be fought for.

This is what I want to be my legacy, my family’s legacy. I refuse to live shrouded in the silence of stigma that surrounds suicide. People talk about the ripple effect from when someone dies by suicide, but what about the waves that are made when someone’s life is saved, and that person chooses to live? So, let’s go out there and make waves!”

This story was submitted to Love What Matters by Rachel Cunningham. You can follow her journey on Facebook, Instagram, and her blog.  Submit your own story here, and be sure to subscribe to our free email newsletter for our best stories and YouTube for our best videos.

‘My dad killed himself, didn’t he? That’s why you cried so much when I was a baby?’: Mom doesn’t let labels define her, ‘I am more than just an amputee or widow’

‘He glared at me. ‘I didn’t lie to you.’ Ben wasn’t supposed to drink on his medications. ‘He has a gun!’ We heard a single shot.’: 24-year-old wife loses husband to suicide, ‘One breath at a time, you get through it’