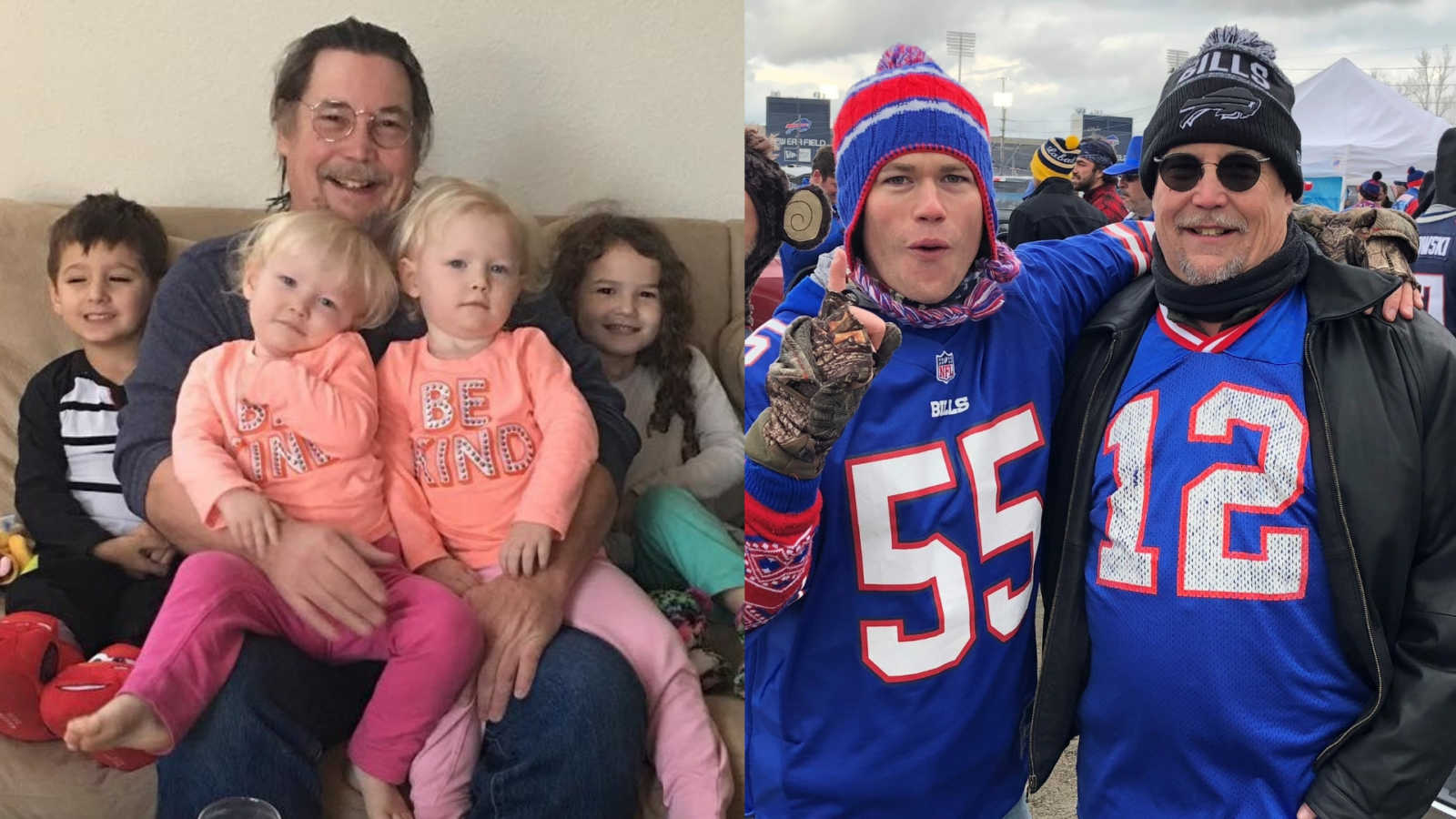 “My father in law Rick grew up in Buffalo, New York, and has not been back there since 1975. He was born in France and moved to Buffalo as an infant. He spent his formative years there, graduating high school and eventually leaving the city to pursue new opportunities. I don’t think he ever intended on staying away for that long. But with life and five kids later, he just never had the chance to go back.

My husband Tim is the youngest of his five kids. When we had our four young daughters, Rick moved in with us to help out. We were juggling four girls under the age of 3 and I was not too proud to admit I could use the extra assistance. He lived with us for two years, growing closer to all of us in the process. The entire experience was amazing as he was so helpful to all of us. He took care of our yard when we were too tired to even take care of the inside of our home. He did our dishes on a regular basis which was probably one of the most helpful things he could have done in those early months. During this time he spent with us I learned more about his love of the Buffalo Bills. While being with my husband, I of course grew accustom to this love of a team on the other side of the country, but I didn’t really understand it fully until Rick was with us.

I know there’s die-hard fans in any and all sports. But their unconditional love for this one team that hasn’t been super great in recent history was a little bit crazy to me. I have never had an alliance to a specific team throughout my life, I’m more-so a fan of specific players from all over. But alas, they would cheer every Sunday morning for the Bills in our living room together and still continuously loved them even when this organization would fail them week after week. It was quite an honorable thing to witness – father and son bonding over a team no matter how many wins or losses they achieve.

Ever since I met Tim, he was always talking about the idea of flying back to Buffalo, checking out his dad’s old stomping grounds, and catching a game at New Era field together. After all, his dad was one of the first people in that stadium when it first opened in 1973. But life, five kids, ‘never having enough money,’ and plain old excuses kept pushing that trip out again and again. I knew it was something that Tim really wanted to do, I just never pushed him to pursue it. You always think you have more time to do trips like that. You always think you’ll have more money by that time the next year.

We recently moved to a new city and Rick didn’t come with us. It was a little bit of a learning curve for us to not have that extra support around all the time. While we were settling into our new normal fairly far away, we learned that Rick had cancer. The whole thing felt very surreal. Barely 2 years prior I had lost my dad to his very short 4-month battle with pancreatic cancer. The news that now Tim’s dad had cancer as well was like we were reliving the cancer nightmare all over again. Surely we both can’t lose our dad’s to this disease, right? Especially not back to back like this.

My husband Tim spent a few days in a state of shock. I, being a girl, wanted to talk about it a lot. I wanted to know his thoughts and feelings. I had just been through this so maybe I thought I could help in a way he couldn’t with my own dad. Maybe I could say the ‘right’ things, or just be there for him in a way he couldn’t for me prior. I really just wanted him to spill his emotional guts to me. I thought it would make him feel better. But he just kept repeating, ‘I’m not going to freak out until I know all of the details,’ and he didn’t let up from those words. I knew deep down he was petrified of what the outcome would be. But he just didn’t want to live those fears until it was his reality. It’s hard not to respect that.

I finally got a taste of how Tim felt when my dad was diagnosed. The helplessness is deafening. All I wanted to tell him was that everything would be okay. But I didn’t know, and I certainly wasn’t going to lie to him. I silently prepared myself for the worst case scenario. I didn’t talk about it out loud, I just internalized it all and prayed so hard we wouldn’t have to face it. I thought a lot about the Buffalo trip that never happened. What if he never did get the chance to take his dad? Was I too selfish in past years to ask him to keep putting it off? Were we just too immature to know the magnitude of how important a trip like that would be? We could have made it work, we just chose not to over and over again.

Our worst case scenario never came to fruition and Rick had surgery to remove all of his cancer. He was extremely blessed with the outcome he was given and the blessing is not lost on us, either. As soon as the test results came back with good news, Tim booked a trip to Buffalo to watch the Bills play the Patriots on Monday Night Football on October 29, 2018. He bought tickets to the game and got as close as he could to the front row. He booked a hotel close to the stadium and planned out the entire thing in a matter of a few hours back in March.

The entire trip was a surprise to his dad. The other siblings weren’t able to attend but Tim still wanted to experience this city his dad had so much history in. They spent the weekend exploring all the different attractions, ate buffalo wings the entire time, and walked all of Rick’s old paths that they could find. They visited Rick’s father’s grave, who died in a car accident at the age of 26 when Rick was only 4 years old. It took a little bit of some detective work to find him, but they were finally able to see his final resting place. They tailgated with Buffalo fans before the game which was an experience all on its own. They both were thrilled to be surrounded by more of their ‘own kind.’ The game didn’t go that great, but they both made a memory of a lifetime together.

I think the lesson in all of this is to take the trips. Stop buying the ‘stuff’ and actually do the things you’ve wanted to do with those you love. I’m not endorsing credit card debt, in fact my husband Tim loathes credit cards, but for special trips like this that can make amazing memories? In my opinion, it’s worth it. We have five children and live by a pretty tight budget. We didn’t have the ‘extra’ money when Tim booked the trip. We’ve never had the ‘extra money’ in the past, which is why he never did it. But it was more than worth the few months of paying it off for them to experience this together. They plan on making this trip every single year and now we have the time to save for the next one.

Nobody ever knows what is going to happen in the next few hours let alone the next few months and years. We all think we have more time. We all think that horrible circumstances won’t happen to us. But they can, and they do when we least expect them. This whole situation has taught me to stop worrying about the materialistic side of my life and to focus way more on the experience side. For years I’ve been saying that I’m going to raise my kids more in an intentional way and not give in to spoiling them with things. But every year around this time, I start buying them all of the stuff from Santa and for Christmas. Not this year. This year they are getting all the memberships around town and we are going to start doing more together. Their trip to Buffalo has opened my eyes in more ways than I imagined it could. It’s forced me to look at my own parenting and question what I’m really doing as a mom and what I’m really teaching my own kids.

Thank you Rick and Tim for taking the trip and making memories that will last a lifetime.”