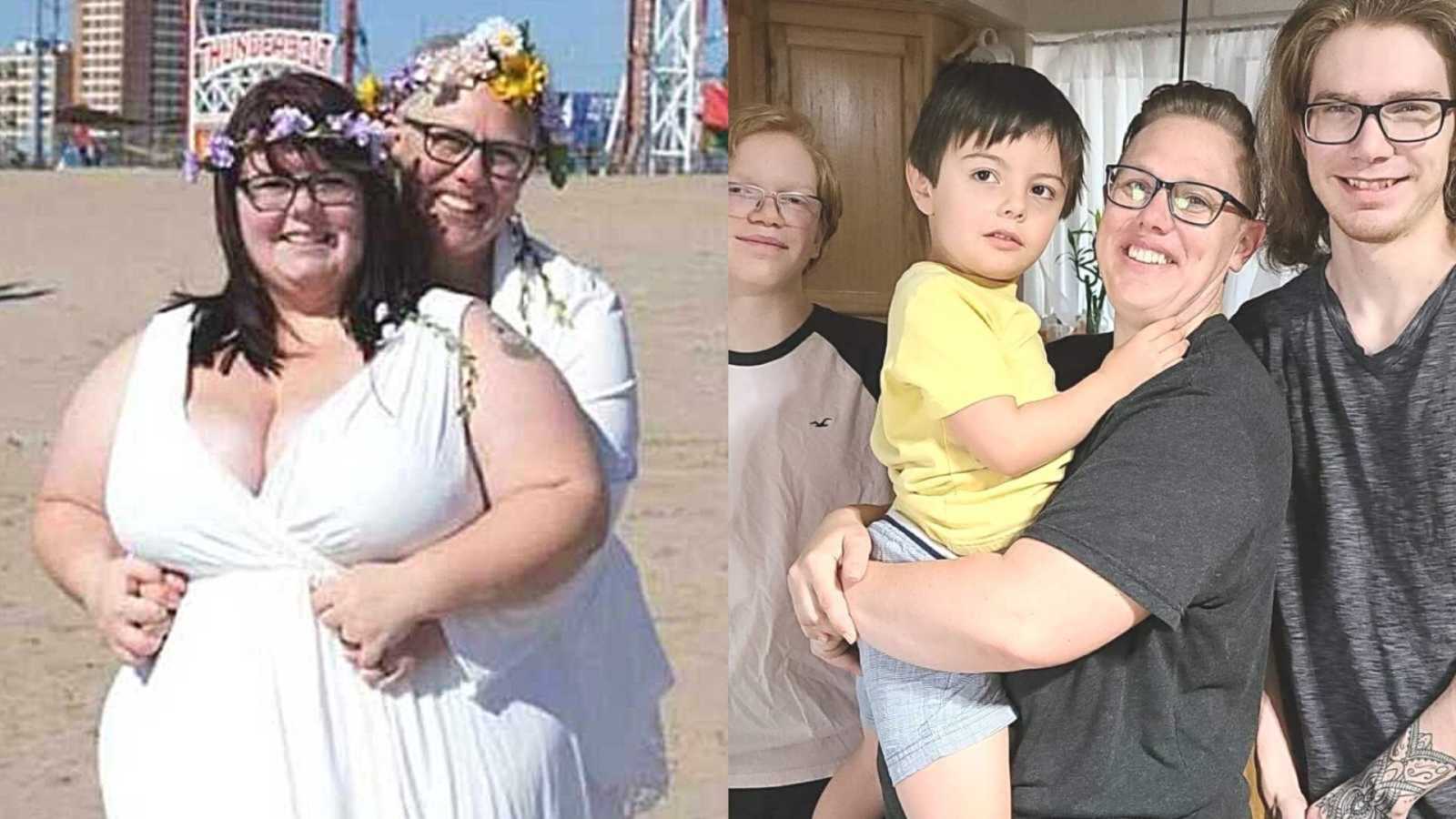 “Three years ago, on July 26 2018, my future wife and I shared our first kiss, which led us on a crazy journey full of ups and downs. We met at the store that I was working at. At the time, we were both married to our second husbands. Becky had five kids and had just recently left the Mormon church. She had come out as lesbian, and was in the process of leaving her husband. I was in a very bad marriage and needed help to leave. Meeting each other when we did was exactly what was supposed to happen. Originally, I had wanted to hire her to be a caretaker for my 2 year old because he has autism and I needed extra help, but it quickly became very clear that she was meant to be so much more than that.

We both left our husbands and we moved in together. At that time, four of her five kids still lived with her, and I brought my son. The blending of our family isn’t a perfect happy story. My wife is 15 years older than I am, and I’m 15 years older than her youngest son so the age gap was a bit of an issue for her kids and family. Some of her kids accepted that she was in a same-sex relationship, but they weren’t all happy about it.

Her youngest two took to me the most. I spent a lot of time especially with her daughter Hannah. She was 15, and was home more than the other kids. She also was the most accepting of her mom leaving the church and coming out. In October of 2018, Hannah even gave me her blessing to propose to her mom. Little did I know, Becky had also recruited Hannah for her surprise proposal!! It was so great to have her daughter approve of us and support us.

Unfortunately, a month later, tragedy struck. Becky and her two youngest came with me and my 2 year old to my family’s Thanksgiving dinner. It was an amazing, perfect day. We ate great food and played games and it felt like we were a family, which is something I wanted my entire life. But that night, after we got home, Hannah went to a friend’s birthday party and was in a very bad car accident.

Becky and I spent the next two weeks at the PICU where her daughter laid in a coma. After two weeks, on December 7, 2018, Hannah became an organ donor and helped save several others lives. At this point, we had only been together for less than half a year. While this event could have completed shattered our blossoming relationship, it just reinforced how very much we loved each other.

The following summer, I took Becky and her two sons with me to visit family in California. While we were there, I even re-proposed to her to show her that I still wanted to marry her, the new her, the version of her that carries immense sorrow. It was a wonderful family trip. We even took some of Hannah’s ashes and put them in the Pacific Ocean.

At this point in our life, her middle child who recently turned 18 and graduated high school, decided to disown Becky because she didn’t approve of our relationship. As a consequence of this, Becky’s eldest child also decided to not really like me. We never had time to get to know each other because her oldest child was already married and pregnant with her first child by the time we got together. So, while it was very hard for Becky to have essentially lost three children over the course of a year, the two that did accept us really made us feel happy and secure as a family. And for a while it was just the two of us and our three sons, ages 20, 13 and 3 at that point.

Becky’s entire family is Mormon, except her older brother who had already left the church years prior and come out as gay. He full-heartedly supported our relationship and even flew us to New York in October of 2019 to marry us! We had originally wanted to get married in February of 2020, but we realized that half her kids wouldn’t attend, nor would her family and people she used to call friends, so when the opportunity to elope in New York befell us, we jumped at that chance.

Her brother even became an officiate so he could do the honors, and exactly one year after Becky proposed to me, we were wed.  It was a beautiful, small ceremony on the beach at Coney Island. When we got home, Becky called her oldest daughter and told her we got married and she said ‘cool.’ So that pretty much sums up that relationship. The other daughter was mad, and her two sons were just sad they didn’t get to be a part of it. We took some of Hannah’s ashes to New York with us and left them in the Atlantic ocean.

In 2020, I underwent a weight loss surgery. After Hannah died, I had gained 60 pounds. I was already overweight but that pushed me up to over 300 pounds and I am only 5’2. Now, 13 months later, I have lost over 100 pounds! Now let us fast forward to this year, because honestly 2020 belonged to Covid. At this point, our three boys are 22, 15 and 5. Back in March, our oldest opened up to us about being transgender. So from this point forward, I will only be using she/her pronouns and her chosen name, Olivia, to describe the 22 year old.

I would also like to interject that my dad is also transgender. He is actually my biological mother who transitioned when I was 8 years old. And in 2020 my ex-husband, and the father of my son, also came out as transgender and lived with us during the beginning of her transition! So when Olivia came out to us, it was not hard at all to change over to her proper pronouns and new name. We were so glad she trusted us enough to help her be free.

We jumped straight into action and got her a new doctor and clothing and everything else she needed and had longed for her entire life. And it was then that adult adoption came up. I had already intended to adopt Becky’s youngest as soon as he turns 18, but now I also offered to adopt Olivia. Doing so would help her change her name AND get her untied from her biological father, which is why I’m adopting the youngest as well. Olivia gave it some thought and decided she would like that. Her birth name was her biological father’s name, so she definitely was excited to be rid of it, but she also was happy to take my last name.

When Olivia was in high school, she was bullied and dropped out. In 2019 and 2020 she was living with friends so when 2021 approached, I reached out to her about moving in with us and getting her GED so she could put that all behind her. We recently finished getting her through all her tests and she is now GED certified and legally Olivia. This year is the start of something really special for her.

Our family is as happy as we can be. We have our own home, five dachshunds, four cats, a bunny, two axolotls, 11 chickens, and several fish tanks. We work from home and home school the younger two. But we are still dealing with depression and heart ache. We miss Hannah. And Becky misses her other two daughters and the relationships they once had. And maybe one day they can have a good relationship again. But for now, we just take it a day at a time and do what we can for the three kids we do have relationships with.

Despite all the hardships we have faced, we are a strong couple and we love each other so much. We will be celebrating our second wedding anniversary this year! I look forward to many more. Religion, age, gender, family pressure, and even death, all impacted our lives and caused so many struggles for us, but we persevered and have come out stronger than we ever dreamt possible. It doesn’t matter if you have five kids and are in your 40s and part of a cult. It doesn’t matter if you are 22 and grew up being told you are the man of the house even though all you want to be on the outside is the woman you are on the inside. It is never, ever too late to follow your dreams and heart and make life what you want it to be. Find people who accept you as you are and know your worth.”

This story was submitted to Love What Matters by Dee and Becc from Southern Arizona. You can follow their journey on Instagram. Submit your own story here, and be sure to subscribe to our free email newsletter for our best stories, and YouTube for our best videos.

‘Are they ALL yours?’ What do I say? ‘Yes, these 4 are mine, but those 3 aren’t.’ Being a step-parent is THE thankless job.’: Mom discusses ups and downs of being a blended family‘

Let’s give this a go, shall we?’ The first time we met, I can’t even tell you how nervous I was. It’s about giving up control.’: Moms co-write blended family journey, ‘Life is humbling and messy’

‘You were adopted.’ My world stopped. I investigated their faces as all of them started to cry. I became their mother.’: Mom of blended family says ‘blood doesn’t mean anything’ 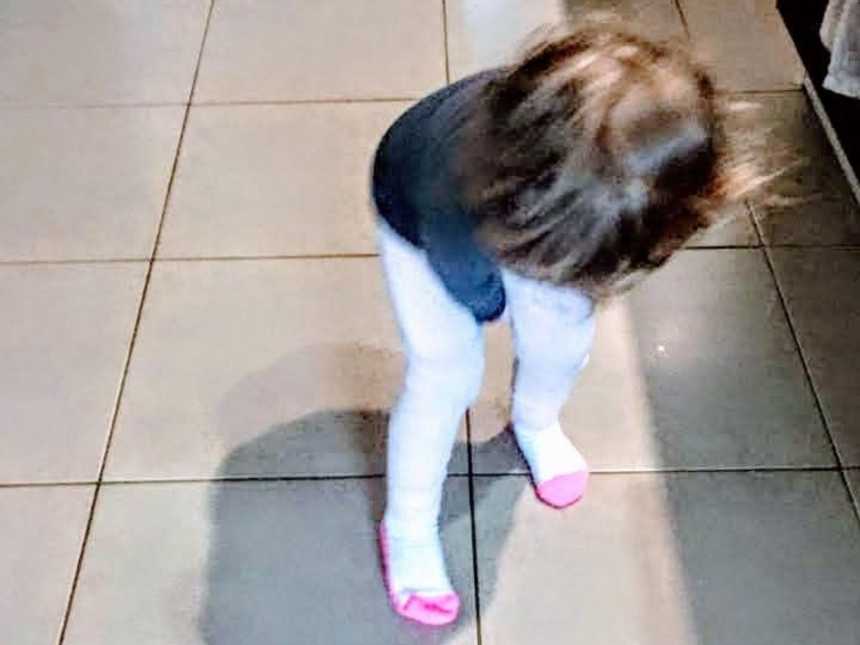 ‘HEELLLLPPPP!!! I STUCK!!!’ Stepping out of the shower, I heard a hysterical call for help from my toddler.’: Woman hilariously ‘saves’ daughter, ‘The things we do for our kids’

“I didn’t have time to put on clothes. ‘HEEELLPP!! HELP MomMY!’ I rushed my bare ass out of the shower. In what felt like negative 1 million degrees, my frosty ass was jiggling down the hall, picturing all sorts of ludicrous situations.”

‘If it wasn’t for Charlene, I never would have made it.’: Stranger makes 8-hour drive to delivery room so dad-to-be can witness birth of newborn after flight cancellations, rental car shortage

“He came in and pretty much fell to his knees, put his head on my belly, and was in tears.”