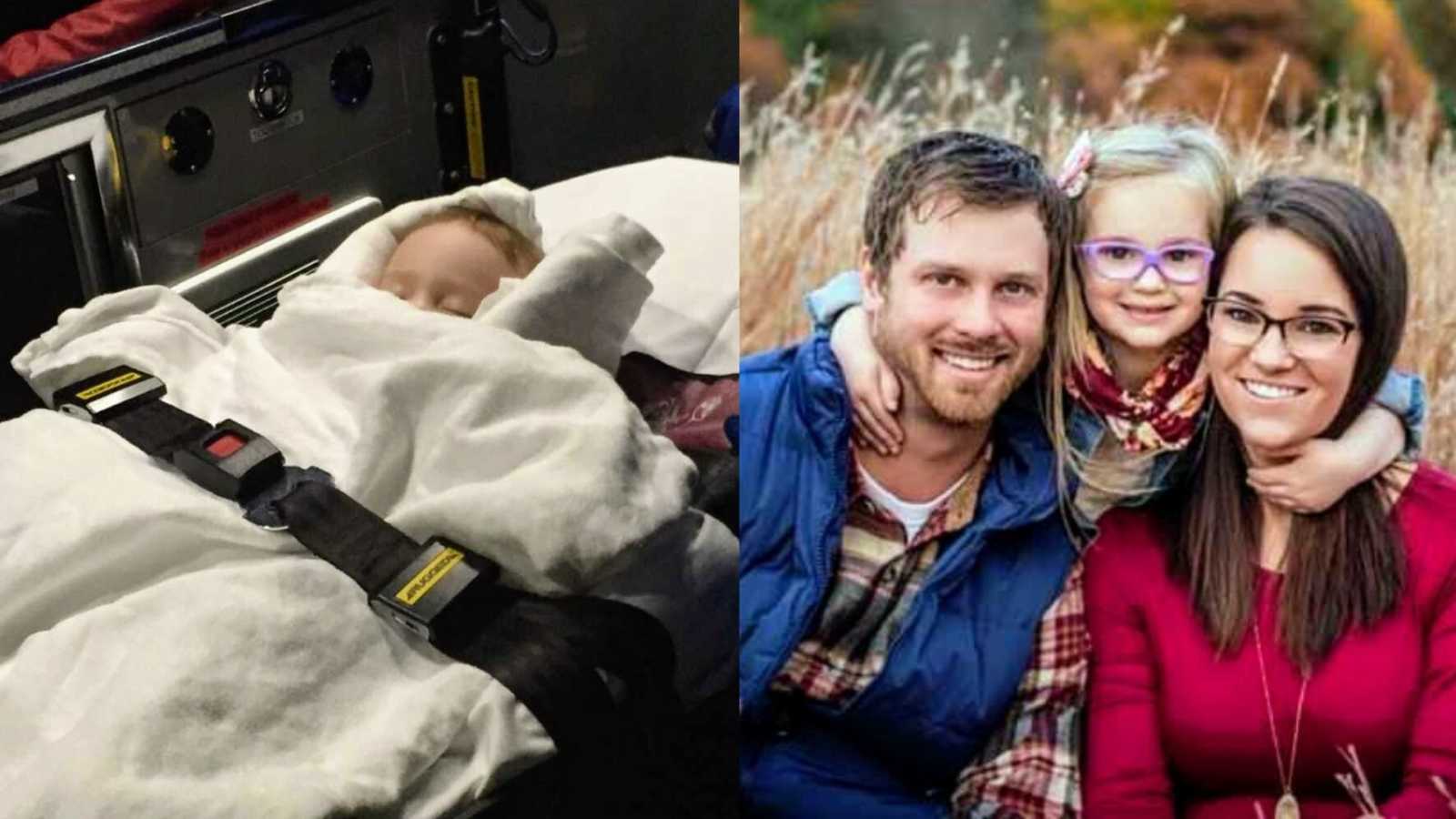 “Nearly six years ago, my husband and I blindly and naively entered into parenthood. After an endometriosis diagnosis a few years prior, it was a miracle we got pregnant right away and were ecstatic. Our first year as parents was a sleep-deprived whirlwind. I honestly don’t remember much of it, aside from the constant, inconsolable crying.

Just when we thought we had gotten ahold of this parenting thing, at 13 months, our sweet baby girl, Quinn, began having seizures. We spent the next three months in and out of the hospital searching for answers. Then one day we got the terrifying diagnosis.

Our baby had Epilepsy.

The next year was the scariest time of our lives. We were still adjusting to life as parents and then had to add being a parent of a medically-fragile child. Medication trials and non-stop doctor’s appointments took over our lives. It seemed never-ending, yet it was just the beginning. A snowball effect, if you will.

Just as we were getting our bearings on Epilepsy, we were sent to a pediatric ophthalmologist where we learned our girl had very poor vision, one eye significantly weaker than the other. She required daily eye patching and a hefty glasses prescription. After her Epilepsy diagnosis, glasses would seem trivial. However, as I said before, the snowball effect.

Shortly after that, we were sent to Boston Children’s Hospital again, to a new specialist this time. It was then that our sweet, quirky girl was diagnosed with Autism Spectrum Disorder. This earned us an entirely new way of life and even more doctors and therapies.

The snowball continued to form when her Autism team sent us to genetics to see if there was anything else we should be concerned about. Sure enough, a genetic mutation was found, linking her Autism and Epilepsy diagnoses. At this point, we have moved from a snowball to the body of a snowman. This was not at all what we were expecting when we got pregnant a mere 3 years prior. Our baby’s medical history was as thick as a book and diagnosis after diagnosis continued to be added to her chart. We wouldn’t change our sweet, unique, and headstrong girl for anything. However, my husband and I were pretty traumatized by our experience as new parents and thoughts of having a second child was buried under years of fear and trauma.

That was of course until one day. On that particular day, no different than the many before it, Quinnie asked me for a baby. That sparked something inside me I never thought would happen again. I longed for another child so desperately. I wanted to make my sweet girl a big sister. My husband took a bit of convincing but eventually agreed and our journey began.

We were naïve once again, thinking we would get pregnant right away, I mean it happened so quick with Quinn, why wouldn’t it happen that way again? A year went by and nothing. Back to back miscarriages followed shortly after. I was devastated, angry, and flat out depressed. It was a dark time in my life. I felt like such a failure as a mother, a wife, and a woman. I felt utterly broken.

In early 2019, I started doing some research on Endometriosis. I had already had four surgeries to remove endo and cysts but the pain was back like never before. That HAD to be what was wrong. I found Nancy’s Nook on Facebook and learned all about how excision surgery was the gold standard for Endometriosis removal. In March of 2019, I had excision surgery, so hopefully, that would be my cure.

At my follow-up appointment, my surgeon reviewed all the places she found endometriosis. She ran some preliminary blood panels and immediately referred me to a Reproductive Endocrinologist. I was shocked. We needed more help than I could’ve ever imagined. We started with a fertility specialist in May and it was completely overwhelming. They ran test after test and sent me to five different specialists, for various reasons. In the end, I had endometriosis and a low ovarian reserve. My ovaries were that of a 40-year-old. We were given less than a 3 percent chance to conceive on our own. I was absolutely heartbroken my body had failed me and our family. The one thing my body was made to do, and it couldn’t. My doctor suggested we go straight to IVF, however, my husband was hesitant so we agreed on starting with IUI.

Our first IUI cycle began at the end of July. It failed. We went straight into the second cycle of IUI, adjusting my meds slightly. It also failed.

I started to panic. IUI round number three came and went with yet another big fat negative.

Now in straight out panic mode, we realized IVF was our only option. No one can possibly prepare you for the mental and physical stress and trauma from failed cycles, or the rollercoaster IVF brings you on. I received my giant box of medications in the mail, watched all the injection tutorials, organized my supplies, and started with a hopeful heart. My response to the medications was mediocre.

Due to my low ovarian reserve, I had far fewer follicles than most women my age. Egg retrieval day came, and only eight eggs were retrieved, six of which were mature. Once again, my heart sank and I felt broken as I listened to all the other women in the recovery area have egg counts of 20 and higher. ‘What is wrong with me?’ I cried. I cried A lot.

The next day, we got a call from the embryologist who informed me all six of our eggs fertilized with ICSI. I was relieved since we did not have much to work with, to begin with, and typically only 50 percent or so fertilize.

A few days later, we received another call and found out all six of our eggs made it to day five blastocysts. Finally, we had something going our way! Although my eggs were sparse, the embryologist said my egg quality is really good. All of our embryos graded high quality and for the first time, I let a glimmer of hope sneak in. We went right into a ‘fresh’ embryo transfer the next week. We went home with a picture of our little em-baby and hopeful hearts.

15 days later, all that hope turned to heartache once again. Our little embryo did not stick. I was not pregnant, again. After weeks of pain and emotions, injections, side effects, and thousands of dollars spent and we had nothing but an empty uterus to show for it.

For the following cycle, we decided to do a ‘Natural FET’ (Frozen embryo transfer) per the advice of our fertility doctor. I have a blood clotting disorder and am unable to take estrogen like most women going through IVF do, so a ‘natural FET’ would be less medication and hopefully be gentle on my body. I had acupuncture on and off that entire week and finally went in for my transfer. Once again, they sent me home with a picture of our em-baby but this time we left with a guarded heart.

Four days after my transfer, I took a pregnancy test expecting nothing. There was a very faint second line. Sure, this had to be a fluke, I didn’t think anything of it. The following day, I took another test and that second faint line was a little darker. My heart began to race and a different kind of panic ensued.

I tested on and off the next few days until our fate was confirmed with a digital test. Pregnant.

I hadn’t seen a positive test in over a year and was in complete shock. It worked. It actually worked. I called my RE on Monday morning, begging them to let me come in early for blood work, and they agreed. It came back positive and pretty high for being so early. I had my blood checked a few more times to ensure it was doubling and then scheduled for my first ultrasound.

The anxiety leading up to the ultrasound was awful. Some days I could barely get myself out of bed, certain our baby wouldn’t have a heartbeat, and that I would miscarry again. The fear, to this day, is all-consuming. Waiting for a positive pregnancy test after so long is only half the battle. Coping with pregnancy after multiple losses is a completely different animal. Thankfully, not only did we see our baby on the ultrasound screen, but we also saw the beautiful, strong rhythmic flicker of his/her heartbeat. I burst into tears. It was such a surreal moment that I will never forget.

We are far from out of the woods yet, but as each day, and week pass, the wall guarding my heart comes down little by little. I anxiously await each milestone, knowing all too well nothing is guaranteed. But if I’ve learned anything from my life thus far, it is to have hope. Lean on each other, and even on the bleakest days, don’t lose hope. Without hope you have nothing.”

This story was submitted to Love What Matters by Kylee Campbell from Massachusetts. You can follow their journey on Instagram. Submit your own story here and be sure to subscribe to our free email newsletter for our best stories, and YouTube for our best videos.

‘Are you driving?’ she asked, ‘You might want to pull over.’: Self-proclaimed ‘cocky millennial’ mom admits she was ‘scared, angry’ after daughter’s epilepsy diagnosis