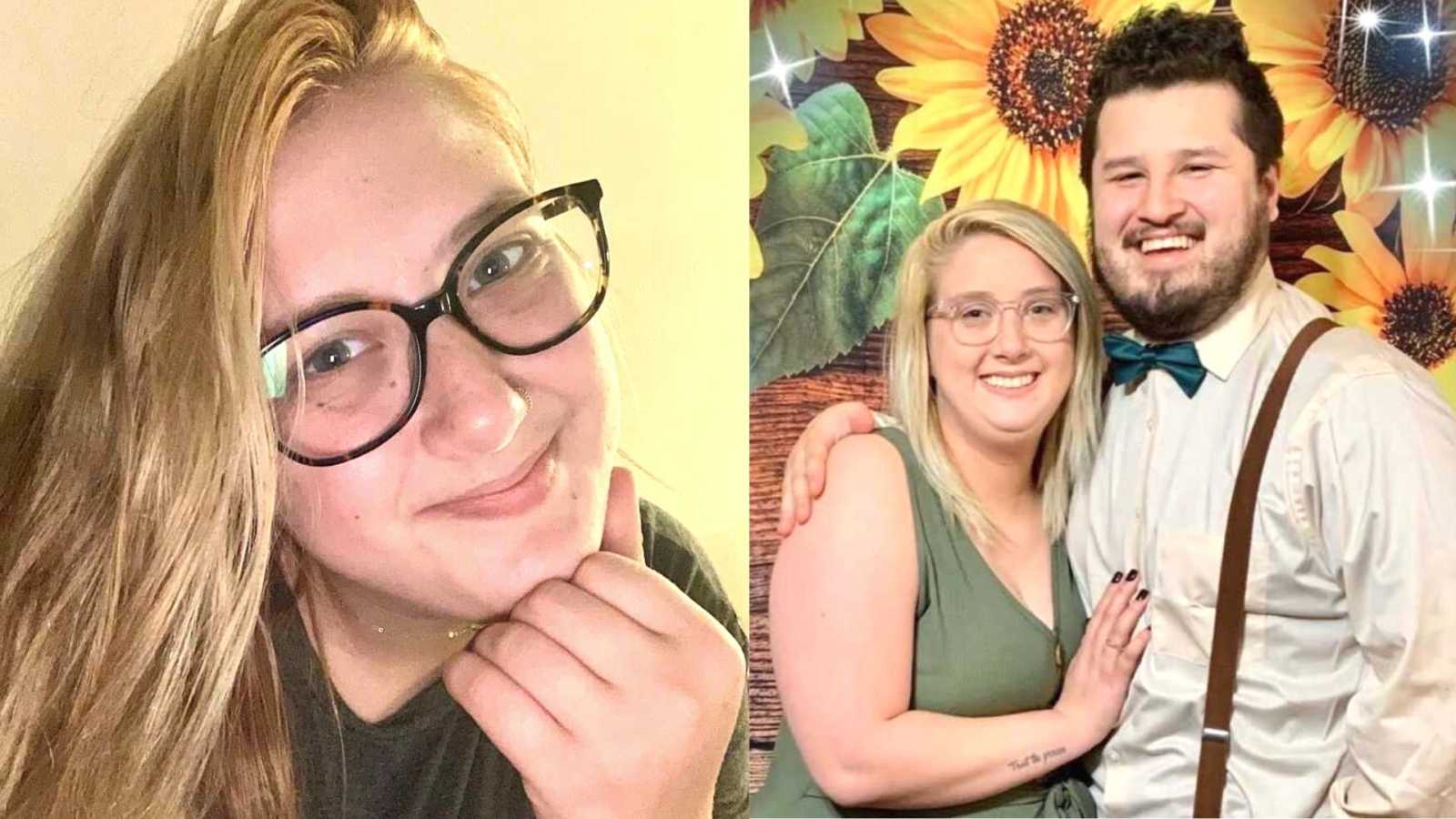 “I’m Diana, better known as ‘Di.’ I live in Maryland with my boyfriend and our fur-babies. I grew up with both my parents, two older sisters, Caryn (Cares) and Andrea and many animals. One of my sisters, Caryn passed away from medical complications in January of 2020.

Caryn had special needs and a long medical history with a multitude of health complications. She had a chromosome anomaly (trisomy 4p+) among other diagnoses. I was a generally healthy child until I was 23 with the exception of being born with one kidney and having hyper-mobile Ehlers Danlos syndrome that contributed to a couple broken wrists and torn ankles. When I was 23 my health hit the fan.

I began getting chronic bladder infections with no answer as to why, how, or what we could do to fix it. I was repeatedly admitted to the hospital for IV antibiotics which led to repeated bouts with cdiff. I experienced sepsis twice. During this time, probably because of the Ehlers Danlos, I had constant IV’s blowing that needed to be changed and nurses had difficulty finding veins. This went on for about 6 months beginning in 2017. I had always suffered difficult periods and my gynecologist had me try several different oral birth controls prescriptions over the years. However, they all caused terrible side effects such nausea, dizziness, fatigue anxiety and depression.

During this period of recurring infections and admissions, I was also experiencing agonizing and unbearable abdominal pain, bladder pain, GI issues, orthopedic issues. All of the imaging and blood work that multiple specialists ordered came back normal. My doctors recommended I see a gynecological surgeon  to rule out endometriosis, and other diagnoses. I had never heard of this, but I was looking for anything to grab that could explain the misery I was in, day in and day out.

I saw a gynecologist who ‘specializes’ in endometriosis, and she did an exam at our first appointment and realized I have 2 cervix and 2 uteruses and thought that could be uncomfortable, but didn’t explain the agony, so she asked if I’d be interested in doing an investigative laparoscopy to look for, and if found, remove endometriosis. She explained that in addition to my symptoms, endometriosis is also not unusual in people with 2 uteruses. 1 month later, I was scheduled for excision surgery. Stage 4 endometriosis was found. It was surrounding my bowel, bladder, lower aorta, pelvic region, and several other places. It was supposedly excised (removed from the root), and I was given a Lupron injection.

Lupron is a medication injected at 3 month intervals that induces reversible menopause and can cause all the symptoms of true menopause. It was absolute hell because in addition to continuing to experience most of the same symptoms I had been experiencing the past 7 months  I was also experiencing significant side effects from the Lupron injection including severe weight gain, hot flashes, fatigue, severe nausea and dizziness, passing out, body aches and bone degeneration. I was developing significant GI symptoms and after colonoscopy and endoscopy was diagnosed with IBS, bile reflux and microscopic colitis. Endometriosis can contribute to the development of GI symptoms and are not unusual for endo patients. I continued to experience severe pain and urinary symptoms during this time even when not being treated for an infection. My urologist performed several diagnostic tests to better examine the urinary tract and function but did not see anything to explain my symptoms. I eventually saw a urogynocologist who performed a cystoscopy and hydrodistention and found evidence of significant interstitial cystitis.

IC is a painful inflammation of the bladder that can contribute to chronic infections and urinary issues. Hydrodistention of the bladder enables diagnosis but also can help to relieve some of the pain of IC. I have had several more of this procedure since to relieve the symptoms of particularly vicious IC flares.  While all of this was going on I began having crippling fatigue and full body, flu like aches and pains all  the time. I was nauseous 24/7, I would get physically ill at unpredictable times, my life stopped. It was during this time I was diagnosed with fibromyalgia. The endometriosis pain didn’t go away after the first surgery and the IC was  a constant battle.

Due to my worsening medical conditions and symptoms and more diagnoses, I began losing friendships, people who couldn’t be ‘bothered’ with my bad days and simply weren’t supportive. This is something that many of us with chronic illnesses struggle with: loss of friendships and relationships. I began searching for support outside of my personal life and made an Instagram one day and I have been blessed by support from total strangers, now friends on the internet. Those in my life that have stuck around have been my go-to people on my hardest days, and my cheering squad. I have a select few in my circle that I know are there through thick and thin, but have a personality of ‘you’re either in, or out.’ If you can’t be there for me at my worst, that’s okay — those just aren’t my people.

After more searching, I went back to my gynecological surgeon in tears asking for help. After much resistance, 4 months after my 1st excision, she went in for a second and found all the same spots of endometriosis in all the same areas. Again, after surgery, there was no pain relief and I had a gut feeling that not all the endometriosis had been removed. I knew it was time for a second opinion and searched for the best endometriosis surgeon/excision expert in the region. I found a doctor in Washington DC who saved my life: Dr. James Robinson.

In November of 2020, after lots of previous appointments, working with a pain management specialist, doing trigger point injections and pelvic floor physical therapy to no avail, Dr. Robinson agreed to perform excision surgery, his first on me. During the 5 hour surgery, he found my bowel was wrapped contributing to the GI issues, the entire bladder area was  covered causing the interstitial cystitis. The pelvic region had endometriosis and nerves had been affected causing me difficulty walking with agonizing hip, leg and sciatic pain, and the area around my aorta also had some endometriosis. This was all found 14 months after 2 prior surgeries which had supposedly removed the existing endometriosis. Because of the extent of the endometriosis he found Dr Robinson was skeptical that it had indeed been adequately removed during the previous two surgeries.

I have been in continual recovery from endometriosis surgery for the past 11 weeks. I still have interstitial cystitis, fibromyalgia, IBS and Ehlers Danlos wreaking havoc on my body but the endometriosis surgery changed my life because I can function at a more normal level now. I however still struggle with many symptoms of my other illnesses on a daily basis. I am grateful to have improvement with Endometriosis.

My pain regimen that I am currently on post-excision works better and I have explanations for what’s been happening to my body for so long. I have learned how to advocate and fight for my health and my needs. My sister’s life and loss taught me a lot about how to survive when life doesn’t go as planned. When I’m going through the worst days of my illness, I remember how she fought with grace and humility through each experience, diagnosis and high pain day.

I also learned from my sister how to advocate properly. Unfortunately, patients with chronic illnesses and complicated medical history, advocating and being believed is an exhausting task. I have learned certain ways to advocate from years of watching my mom fight on my sisters behalf. Not being believed by a medical professional when you are telling them about our daily struggles, the last thing that should happen is being questioned about whether or not our symptoms and pain are real.

Not being believed is a major battle that us warriors fight on a daily basis. It comes from medical professionals, skeptical family members, friends who don’t understand our situation or strangers on the street who are skeptical and question people they’ve never met.

I help others manage and learn to cope with the frustrating daily battles as a chronically ill patient. I am a certified life coach for the chronic illness community and help others navigate their illnesses, new diagnoses, fear of new appointments, navigating skeptical family and friends. I also work with my clients on building healthy relationships around our scenarios,

Chronic illness affects every aspect of one’s life. Living everyday in an unknown, unpredictable medical state affects you more than people realize. It affects everything from relationships, education opportunities, working abilities, body image, quality of life and change in independence and mental health is also affected, along with so much more.”

This story was submitted to Love What Matters by Diana DiGiacomo from Maryland, USA.. You can follow her journey on Instagram. Submit your own story here. Be sure to subscribe to our free email newsletter for our best stories, and YouTube for our best videos.

‘Please don’t take this away from me!’ On my wedding day, I was covered in hives. I felt like I was dying.’: Woman receives ‘life-changing’ Ehlers-Danlos Syndrome, autism diagnosis at 39

‘You’re imagining the sensation.’ My right hip snagged. My leg buckled beneath me. Pain shot into my thigh like electricity.’: Woman finally diagnosed with Ehlers-Danlos Syndrome, ‘They didn’t believe my pain’

‘I got the call and instantly threw up. ‘Do you know how sick you are?’ We cried together.’: Young woman with Cystic fibrosis gives tribute to donor, ‘I am forever grateful for the second chance at life’