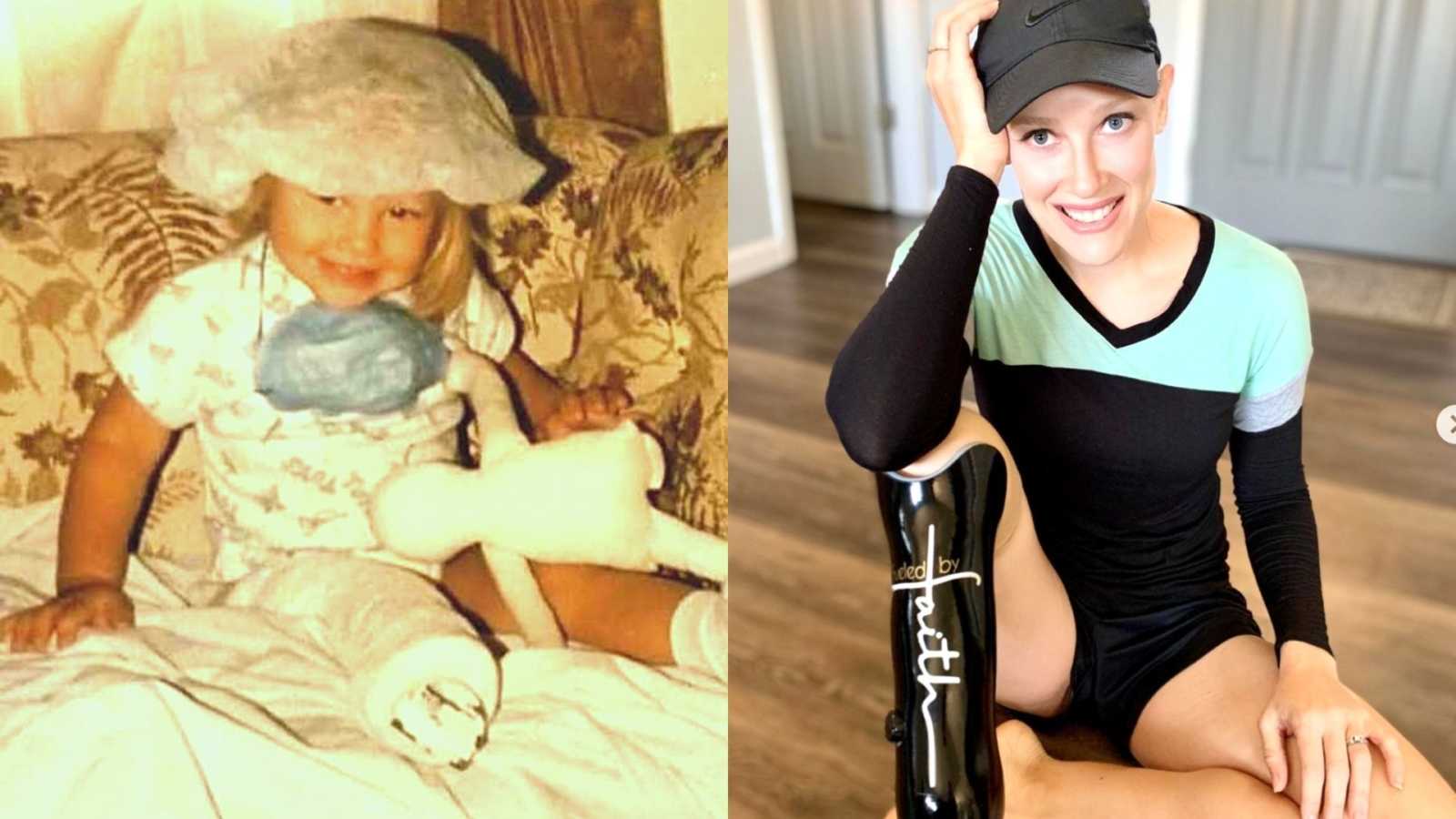 “From the moment I was born, my identity was already being shaped by what I was rather than who I was. I was instantly branded with a nice little label that would follow me the rest of my life—disabled.  Unexpectedly coming into the world missing two toes, being devoid of several crucial bones, and having a defective ankle joint on my right leg is what earned me such a title. My parents had conflicted emotions; they were ecstatic that I had finally arrived and were thrilled to have another baby, but they also had to come to terms with not getting the perfect, healthy baby they had dreamed of. I was both a blessing and a letdown.

When I was 2, the doctors and my parents finally decided amputation was the best option.  Feeling confident they made the right choice, my parents never looked back. They spent the rest of my childhood being supportive, advocating for me, ensuring I got the best care, and encouraging me to be as active as possible. Without them, I wouldn’t be half the person I am today. They’re the ones that taught me resilience, determination, and tenacity. I would probably be sitting around feeling sorry for myself and making excuses if it hadn’t been for them. Instead, I was playing soccer, softball, riding bikes, and running around causing mischief right out of the gate.

Although they raised me to be strong, nothing could have prepared me for adolescence. Suddenly, I didn’t feel strong and ready to tackle the world like they taught me. Instead, I started feeling different and inadequate. Before, I never used to notice people staring at me. But when middle school came, I didn’t miss one single glance in my direction. It’s like their eyes bore holes into my soul and sucked out any remaining confidence that I had. As soon as our eyes met, I diverted my mine from theirs, embarrassed of who I was. I grew tired of answering the age-old question, ‘What happened to your leg?’ I just wanted to fit in and look like everyone else. I bottled up my emotions and self-doubt in an attempt to not be seen as weak. But, deep down, I felt like an outcast and made every attempt to hide what I thought was my flaw. I wore pants when it was hot, I crossed my left leg over my right, and I wore way too much makeup and revealing clothes to detract attention from my prosthesis. It didn’t help that my classmates decided that was as good a time as any to start making fun of me. It was some of the boys’ favorite pastime it seemed. Peg leg, pirate… I heard it all.

Instead of lashing back at them, I stood there and took it or tried to play it off as a joke. The emotional side of being an amputee was way harder to cope with than the physical. Sure, there were days when I couldn’t even wear my prosthesis because of the blisters on my stump, and when the socket didn’t fit right, it was downright painful, but those aren’t the times I remember into adulthood. Physical pain came with the territory. I was used to it, and normally it was only temporary. The emotional scars weren’t easily fixed by adding more socks or adjusting the fit of my socket. Unfortunately, the lack of confidence and insecurity lasted more than a decade and is something that I have only recently started to gain back.

Thankfully, I had sports. They became my therapy of sorts and are what got me through. Competing against other kids made me feel capable and ‘normal.’ I wanted to prove to everyone that I could keep up with able-bodied people; it somehow gave me validation. For a long time, I was actually better than a lot of them. It turns out that having something to prove gives you a bit of an edge. Unfortunately, my able-bodied friends eventually surpassed me in skill, but that only made me more driven to keep up. I hold on to that trait to this day. One of my previous neighbors who knew me as a kid sent me a message on Facebook the other day saying, ‘Happy birthday to the most driven young lady I’ve ever known.’ I don’t say that to brag, but to show how desperately I still yearn to prove my ability…my worth. I put 110% into everything I do because I’ve always had to stay in the game (so to speak).

The mental struggle of being an amputee is actually what drove me to write my book, WHOLE: A Leg Up On Life. I wanted to show young, disabled kids what they’re capable of and reassure their parents that everything will be okay as long as they don’t hold their children back. Plus, I really wanted someone on the cover to look like them. That was something my childhood lacked. I only knew one other amputee, had never read a single book about an amputee, and didn’t have any toys or dolls that looked like me. I didn’t see myself represented ANYWHERE! That resulted in me feeling like I didn’t belong, like I was weird or didn’t matter. The world needs to see us. I’ve hidden for too long, and I would venture to say there are a lot of other people out there feeling the same way who just need a gentle nudge to embrace who they are and start to love themselves because of their differences rather than in spite of them. Maybe after reading my book they will feel inspired to change how they view themselves and understand their worth.

Getting a different type of prosthesis was the gentle nudge I needed. For the past decade, I have been adamant that I wear a realistic skin covering over my prosthesis to make it look more ‘normal.’ But, I knew that type of leg was holding me back from being a better athlete because it wasn’t as responsive.  That’s when I decided to take the plunge to get a carbon fiber foot with a shiny, black socket. I didn’t know just how much of an effect that change would have on me at the time, but it changed the whole trajectory of my life. All of a sudden, I could no longer hide. However, while being forced into vulnerability, I learned that I no longer wanted to be in the shadows. It quickly enhanced my confidence, and I became proud of my identity. I started having courage to ask well-known people to be interviewed for my blog, I began networking and putting myself out there more on social media, and I set out to advocate for people with disabilities. My newfound assurance also made me bold enough to seek a modeling career, something I have always dreamt of doing in order to gain more positive representation for the disabled community. My leg is a work of art, and my spirit is beautiful.  People need to see that, not just the standard types of beauty everyone is used to seeing. It may sound cliché, but there is beauty in us all, so why are we only seeing certain people reflected in magazines and the media?  I want to be a part of that change!

However, that change for me is multifaceted. It’s not just about beauty; it’s about capability as well.  When people see someone with disabilities, they often assume that we are dis-abled. They believe we can’t perform everyday tasks and that we have a worse quality of life. People feel sorry for us. I became a triathlete to end that stigma. I’m not the best para triathlete out there, but I’ve competed against them, and I can tell you that they are able… able enough to kick the majority of able-bodied people’s butts! I can swim 750 yards, bike 12.5 miles, and run a 5k in an hour and 30 minutes. I average 17.5 miles per hour on my bike, and I’m only getting better and stronger. I want people to look at me and see strength instead of focusing on what I’ve lost. I can tell you what I haven’t lost: my drive, my ability to love, my purpose, my faith. In fact, I believe my disability has actually made me gain things, not lose them. If I wasn’t an amputee, I wouldn’t have a lot of the opportunities that have come my way, and I surely wouldn’t have done some of the things that I have accomplished. Maybe I wouldn’t have some of my finer traits like being resilient, a fighter, or an overcomer. My life isn’t lacking because I’m an amputee, it’s better!”

‘I begged, ‘Please cut my leg off!’ I was drowning in pain while doctors fought over my body like a science experiment.’: Mom becomes amputee after 10-year battle, ‘Love is everything’

‘Who would want a girl with no legs?’ I defied the doctor’s advice until my body BEGGED me to stop.’: Amputee with spina bifida urges ‘life has no guarantees’

‘Tomorrow, your foot won’t be there.’ It looked like it went through a garbage disposal. I was devastated.’: Amputee shares self-acceptance journey, ‘Being different should be EMBRACED’