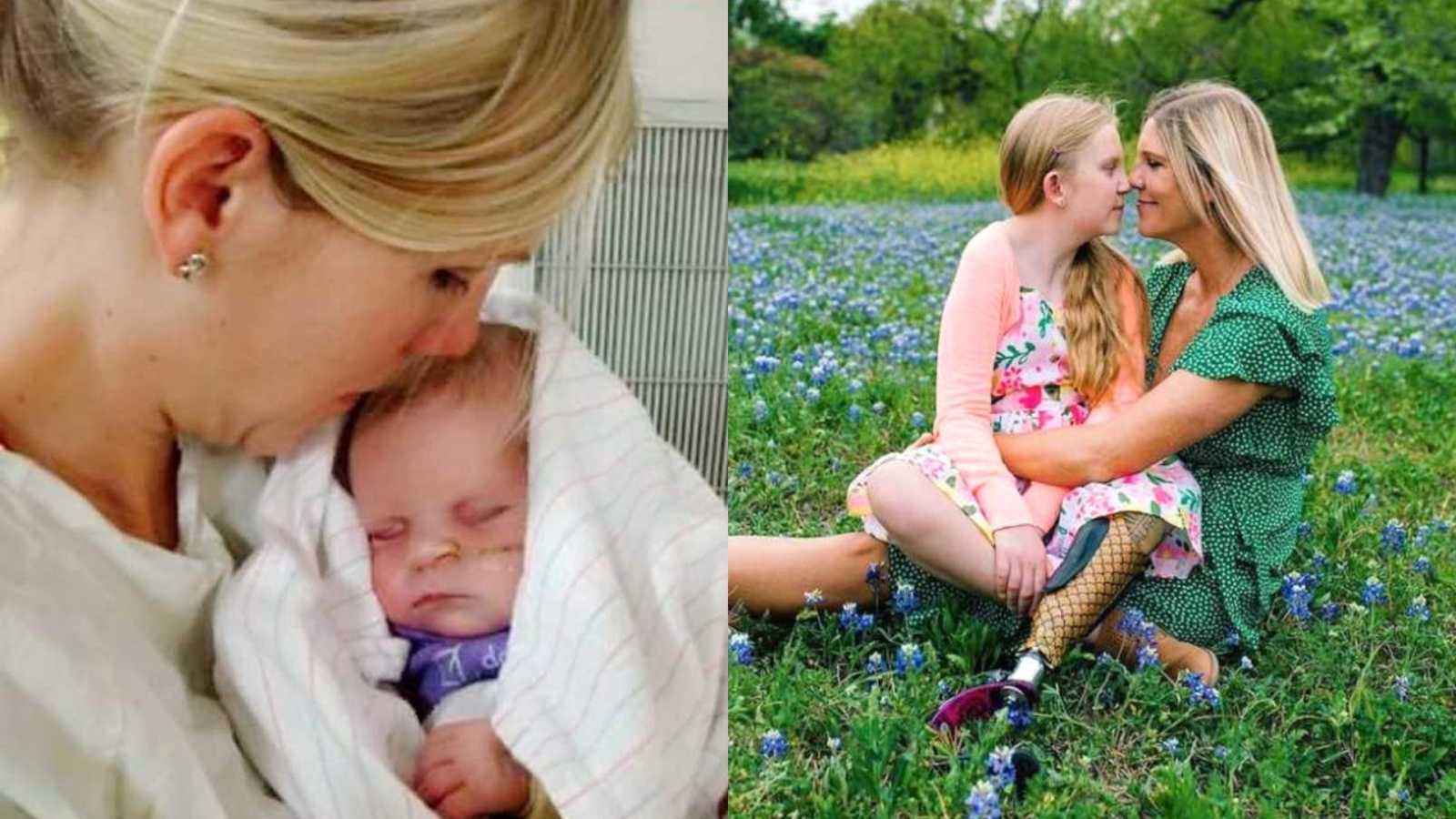 “Callie Grace was born 6 weeks early via c-section. When she was born, the doctors whisked her away before I could even see her. I knew something was wrong when we didn’t hear her cry. I sent my husband, James, to follow the doctors because I was terrified something was horribly wrong. When he came back into the room, I could tell instantly by his face our world was about to be turned upside down.

Callie was born with a heart condition called Tetrology of Fallot. She would need immediate open-heart surgery to repair one of her valves and patch a hole in her heart. The cardiologist also explained she would continue to need a few open-heart surgeries over her lifetime as she grew in size. At three days old, our baby girl, our miracle, our saving grace underwent open-heart surgery. We would spend the next 90 days in the NICU while she recovered and we could show the doctors she was well enough to go home.

During our stay in the NICU, a specialist came to exam Callie because they discovered her left leg was markedly shorter than her right leg. At that point, we had not even come up for air to think about that fact. We were more focused on making sure she was healing, eating enough, gaining weight, her O2 levels were increasing, and she was beginning to thrive.

The orthopedic doctors hit us with another heavy blow. Callie was born missing one of the large bones in her lower leg. She also was missing some of the connective pieces of her ankle bone and would not be able to walk. Ever.

We had an impossible decision to make — do we try to do several bone lengthening surgeries that probably would be very painful and did not have a high success rate to try to save Callie’s leg? Or do we amputate her leg midcalf and get her fitted for a prosthetic leg so she could have a shot at a normal life? How do you even make that decision for your child? How do you get over the guilt that you might be the one to blame for her conditions? How do you pick the right choice?

We made the decision to amputate her leg in the hopes she would grow up with her prosthetic leg and that would be normal for her. Callie would learn to walk, run, and do everything else other children would but…. with a prosthetic. She hopefully wouldn’t spend her childhood in a hospital or a wheelchair. She wouldn’t have to undergo countless painful surgeries that couldn’t even promise she would eventually walk one day.

To say that decision was not an easy one would be an understatement. It was literally the hardest decision we’ve ever made.

There’s not really an easy way to describe the night before the procedure. I don’t think James and I even slept at all. I remember just holding her in between us in bed and kissing her little ‘foot.’ Tears quietly rolling down our faces in the shadows of the room. Trying to reconcile the heartbreaking notion that soon her little foot would be gone but with it being gone, soon we would be able to build something that would finally let her walk. Trying to memorize how she looked with two little legs. One markedly shorter than the other one. One not able to support any weight while the other one was strong, sure, and stable. In many ways with this procedure, we were going to make her even better, even stronger, even more whole. The night before the procedure was spent saying goodbye to that sweet little broken foot, allowing ourselves some time to grieve, and getting ourselves prepared for the battle that lay ahead of us

We struggled to get our footing after her surgery. In an age where everything can be seen, shared, and reviewed in a matter of seconds, it was extremely easy to compare our lives to the seemingly ‘perfect’ lives of everyone else.

I would look at the beautiful maternity photos.

The videos of baby’s first steps.

Swimming lessons in the pool.

The pictures of other people’s kids… kiddos without a massive scar on their chest.

Kids that didn’t have the same look that Callie has in her eyes. The look that says she understands far more than what she should simply because of the battles she’s had to face.

I would look at the other parents and not see that anxious look that tended to live around my eyes. I would see how relaxed and carefree they seemed. Not worried their baby would die in her sleep. Not worried about overwhelming hospital bills. Not stressed about juggling full-time jobs, chronic disease management, and a special needs child.

And it would eat me up inside.

Jealousy. Comparison. Whatever you wanted to call it. I was mentally tallying up the differences between our family and others as if life was some sort of big accounting game, and I felt like our family was in the red.

Until I realized the jealousy I was feeling was caused by counting other people’s blessings instead of my OWN.

I literally was too busy peeking in the window of other people’s lives to even notice all the amazing doors that had been opened for us. The doors that opened to blessings, to opportunities, to happiness, and to becoming a better person. Every minute I spent wishing I had someone else’s life was a minute I spent wasting my own. How could I measure the success of our life with someone else’s ruler?

I started to own those differences.

And I realize how many peoples’ lives we could make a difference in when we truly stopped comparing ourselves to them and embraced all we were made to be.

I started to think about all we were… instead of all that we weren’t.

A flower does not think of competing with the flower next to it. It just blooms.

And that’s what we did.

We were never going to be like ‘them’ and thank goodness for that because then the world would miss out on US.

The perfectly imperfect us.

And I figured out learning not to envy someone else’s blessings is what grace looks like.”

This story was submitted to Love What Matters by Jaime Cline from South Central Texas. You can follow their journey on Instagram and their blog. Do you have a similar experience? We’d like to hear your important journey. Submit your own story here. Be sure to subscribe to our free email newsletter for our best stories, and YouTube for our best videos.

Read more inspiring stories of those with limb differences: