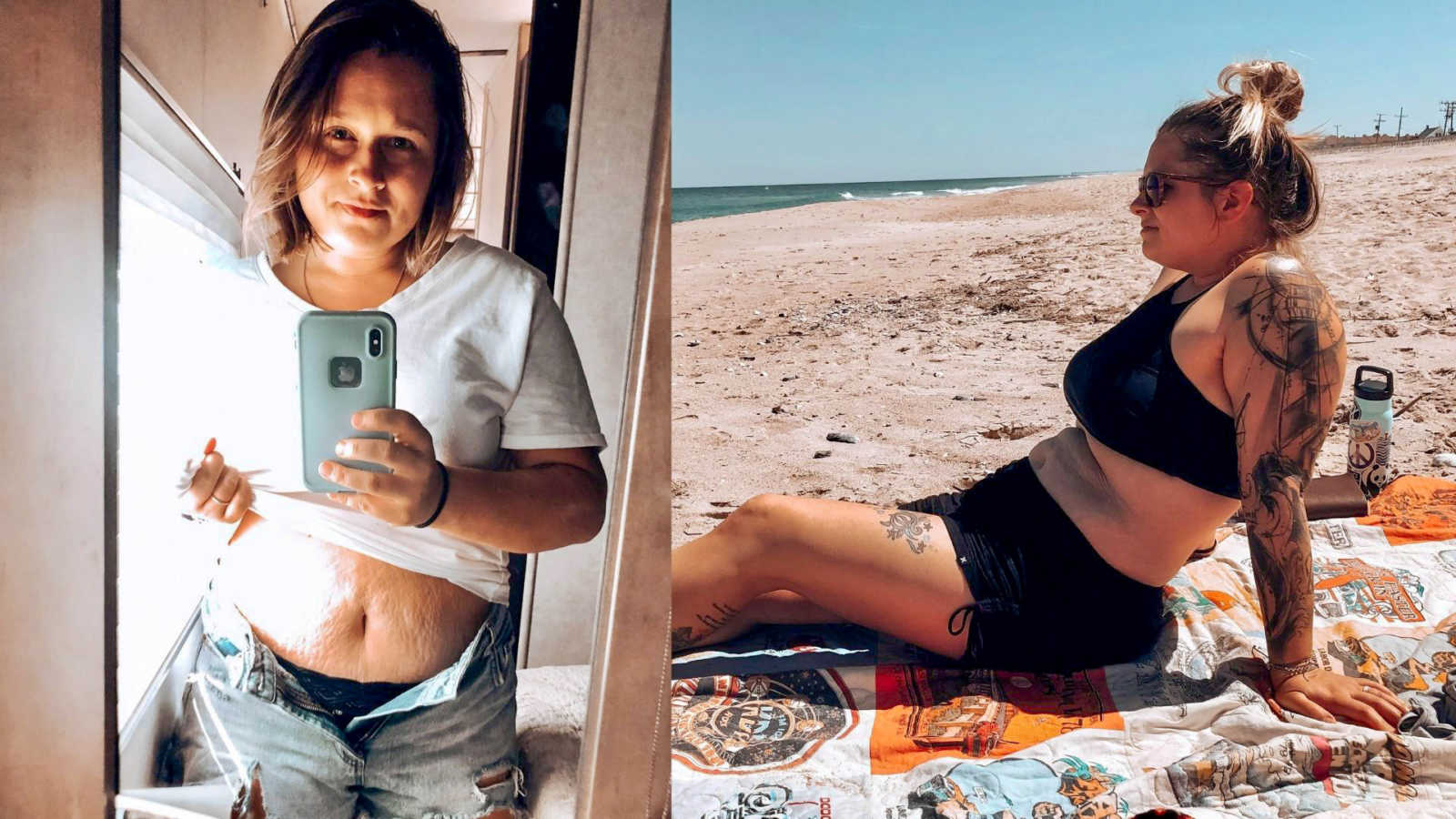 “After giving birth to my first daughter, I hated my body. I was barely 15, had made an adoption plan, returned to a toxic house, and had all the time in the world to mourn my losses—among them, a body which no longer looked or felt familiar. And eighteen years ago, Facebook and Instagram were just pipe dreams. Representation of the female body was streamlined and broadcasted through magazine covers, celebrities, and the ever-popular advertisement models (i.e., Victoria’s Secret, American Eagle, Abercrombie).

Their casting call must have read something like this: ‘Agency looking for tall and thin women with taut, smooth, sun-kissed skin. Defined but not over-defined. Curvy women welcome, but only if the curves are in the bust and butt. Please apply today.’ There were no body positive movements circulating, no women in bikinis with loose skin and marked frames. Any perceived imperfection these models undoubtedly had were airbrushed away, leaving us consumers to lust for a look that wasn’t even real.

It was the summer of ’03, and I would spend the next 16 years wearing tucked in undershirts, t-shirts over one-piece bathing suits, and an unhealthy fear someone might catch a glimpse of my stomach and die of disgust on the spot. Okay, dramatic? Maybe a bit, but I’m not lying when I say I would dream up scenarios that could potentially expose my stomach, and then question how I would mentally recover from experiencing my worst fear.

I shopped in the men’s section and draped XL men’s tees over my smallish frame in an attempt to avert the male gaze. Years of abuse at the hands of men had left me suspicious, so I focused on school and survival until I left ‘home’ at 17, became emancipated, and met my future husband. We met at work that summer and he invited me to play a game of basketball. I wasn’t interested romantically, but something about him was different and I needed a friend, so I decided a pick-up game at the courts was safe enough. Three years later, we were married.

It took a year before I allowed him to look at my stomach. I squeezed my eyes closed and grimaced…waiting to hear him groan in disgust. He didn’t. Instead, I felt his big hand rub across my stomach, followed by something he would continue to echo throughout our marriage, ‘You look perfect to me.’ He has repeated many variations of this affirmation for over 14 years now, constantly reminding me my body is a testament that motherhood changed me. While his words have been like salve to my wounded soul, they were not quite enough to make me feel confident in this body, so unlike any other I had ever seen represented.

And then, it happened…two summers ago, I saw my exposed body on Instagram. ‘Wait, that’s not my stomach!’ But it looked so familiar I had to do a double take. It was some woman I’d never met, from Canada, intentionally posting photos of her postpartum tummy with hashtags like #normalizenormalbodies and #allbodiesaregoodbodies. I scrolled and read for hours, finding solace in the revelation I wasn’t the only person on earth whose body had dramatically changed post-birth, and soaking in this confidence I didn’t know we were allowed to have. Her account led me to other accounts…more women who were tired of hiding under baggy tees and layers of shame. My husband invested years and years into intentional positive encouragement, but it took representation, a literal and tangible community of other women who could relate, in order for me to make peace with my own postpartum skin.

Two summers ago, I bought a two-piece bikini and wore it to a public beach. I was hesitant and still grossly insecure. I kept a towel close by to cover up when my thoughts reverted back to nonverbal apologies for existing in this flawed form. I survived that first trip and tried again and again. I found that each time I allowed my stomach to bask in the summer sun, my apologies faded as my confidence grew stronger. Shame was replaced with the belief I deserved to exist exactly as I was. I no longer hate my body. That doesn’t mean I always feel confident or beautiful, but I do feel normal. I feel grateful for the babies my body protected. I feel thankful for all the things my body can do and less distracted by how it looks.

Most days I feel indifferent to how this stretched, loose, and marked skin rests on top of capable muscles and healthy bones. Not only am I a woman and a mother, but I am a mother to girls. I can’t censor the view society loves to praise, but I can offer another perspective. I can offer authentic and unapologetic. I can offer real. More than once, I’ve questioned how I feel about modesty. Where to draw the line and how to draw it, and then I’ve compared those concerns with my journey towards self-love and acceptance. If showing up in a two-piece or exposing my stomach inspires my daughters or other women to accept their own bodies, I’m proud to add to the noise.

Oh, the woman with a stomach which looked familiar, her name is Sarah and she runs a brand called The Birds Papaya. Sarah has over a million followers and has likely never seen any comments or DMs I’ve ever sent. But, I know she had a starting point when no one outside of her circle knew her name…where she struggled to see beauty in a body society had intentionally left covered. And there, in a space void of any likeness, she made a decision to expose her insecurity and walk towards self-love and it changed my life. She should know that.

My reach is far smaller, but her flame burned bright enough to light my fire and now I want to help normalize something as common as the female body. You are perfectly imperfect just the way you are.”

This story was submitted to Love What Matters by Raquel McCloud of North Carolina. Follow her journey on Instagram. Be sure to subscribe to our free email newsletter for our best stories.

‘A group of ‘friends’ chased me and threw a water bottle at me, while snorting and calling me ‘Mrs. Piggy.’ I ran and carried the shame that weighed more.’: Woman shares journey to self-love, changes she made for her daughter

‘My 10 and 7-year-old girls asked for belly shirts. My knee-jerk reaction was, ‘No, that’s inappropriate.’: Mom ponders balancing body positivity with modesty, ‘I worry about how they will be perceived’