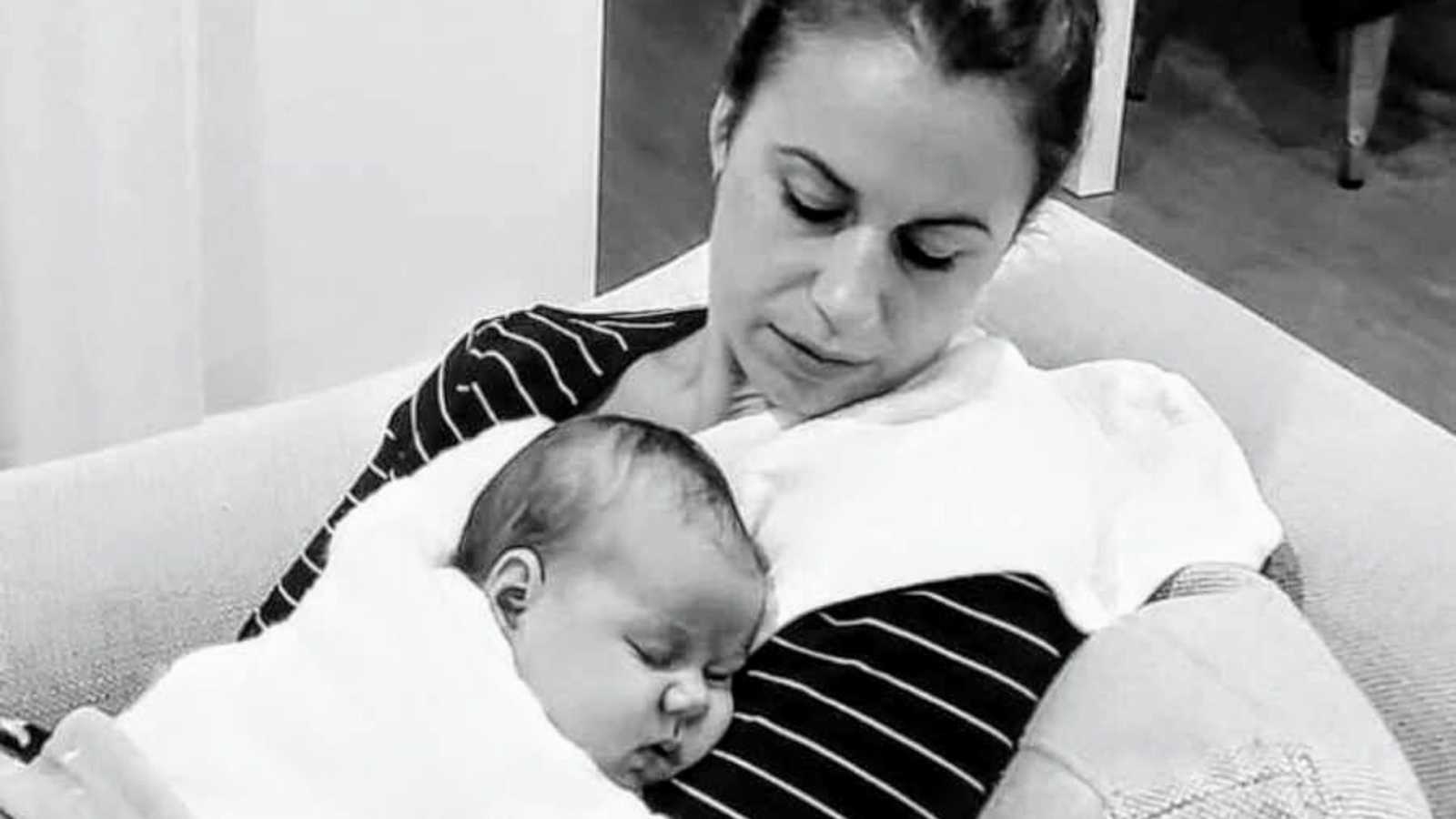 “The birth of my first child was also my birth into motherhood, the moment where my heart expanded tenfold to make room for this precious little boy.

Motherhood was a role I had never imagined for myself, but one I fell into and adored instantly. The love I felt when my baby was placed on my chest, was like nothing I had ever experienced before. It was fierce and unconditional, consuming and everlasting.

I felt an overwhelming need to keep my new baby close to me; he was so fragile, so dependent on me. The thought of us being apart didn’t seem necessary, and if I’m honest, it scared me. It seemed safer to decline offers from others to hold him. What if he needed me but I wasn’t instantly there for him? The thought made my stomach turn, so I rarely let him go. Friends would often comment, ‘You’re holding him too close, stop. You need a break.’ But I ignored them, he was MY baby and I was all he needed.

Like all newborn babies, he woke frequently in the night to feed. I was extremely sleep deprived, running on empty and beginning to feel the real weight of motherhood, and the responsibility I had to nurture and protect this little boy. It began to take its toll. I would wake in between his feeds, bolting upright with an instant feeling of dread, desperately searching the bed for a baby I had never co-slept with, but being consumed by the feeling something horrible had somehow happened to him. Night upon night was permeated with panic-filled dreams, cold sweats, and frantic fumbling through the sheets in search of my baby, who I was convinced I had rolled on in my extreme state of exhaustion.

As the weeks went by, we began to venture out of the house together, which in itself was exciting. But it came with a new set of challenges. In typical newborn fashion, car rides were a thing of nightmares, the inconsolable screaming from the back seat was constant, and the feeling of panic that washed over me was enough to almost send me off the road. Everywhere we went, I envisioned horrible things occurring. Somehow harm would come to my precious boy and I wouldn’t be able to protect him.

Our outings started to become less frequent. The constant visualizations of horrible things happening to my little boy were enough to keep me housebound — isolated from the outside world, trapped inside my head. The family became concerned with my lack of socialization, worried I was losing the plot, and the tiredness must certainly be to blame. The mom friends I had made stopped trying. Offers for play-dates and coffee meets ceased. I had become so withdrawn and anxious, the people around me had given up, assuming I just wasn’t interested.

I never spoke of my internal battle. I assumed it was normal to feel this fiercely protective of my baby, and I shunned anybody who suggested I wasn’t okay. As my little man grew, so did my anxiety, but it evolved and morphed into different forms. I became the mother who hovered beneath the play equipment, in case of an accident; the mother who fed pureed food until my baby was almost 1, in fear he would choke; the mother who never let another soul care for my baby, even though I so desperately needed a break.

Years later, I was blessed with a second son, once again reverting back to the newborn fog and sleepless nights. I was so overwhelmed and exhausted all over again. The anxiety rolled back in like a dark fog, and consumed me as it had done before. But this time I was prepared, I knew the signs. I began to wake as I had before — filled with terror and fretting for my new baby, my head still filled with terrifying thoughts — but instead of shutting down, I spoke up.

I confided in my husband, I vented to my friends, and I released the feelings I had kept locked away in my head because I was scared of the judgment I would receive. I took a leap and scheduled time with a counselor. I poured out my feelings, my fears, and I cried. Oh, how I cried. She allowed me the safe space to unload the anxiety, and gave me the tools to help process what I was dealing with and begin to move forward and heal.

Until I spoke up about my struggles, I was unaware I was experiencing postpartum anxiety. I had no idea why I was suffering. It wasn’t a subject freely spoken about at mother’s group, or online. The topic felt almost taboo. Yet once I began to open up and share my experience, I discovered so many people close to me had been through the same thing. It felt comforting to know I was not alone in feeling this way, I could reach out to my peers and not feel judged, but be supported through one of the hardest challenges motherhood has thrown my way.

My journey through motherhood has been incredible. I now have four beautiful children who have all brought me immense joy, and I feel incredibly privileged to be able to spend every day watching them grow, having a front-row seat to their childhood. Being a mother has seen me overcome my biggest hurdles, confront the darkest parts of myself, and grow and evolve into the mother I am today. And for that, I will forever be grateful.”

This story was submitted to Love What Matters by Hallie Campbell. You can follow her journey on Facebook. Submit your own story here, and be sure to subscribe to our free email newsletter for our best stories, and YouTube for our best videos.

‘Why couldn’t I just be the mom I’d pictured and do it right?’ I was going to love motherhood, every single second.: Mom suffers from depression/anxiety, finally realizes ‘I’m the mom I’m meant to be.’

‘Mom, can I talk to you about yesterday?’ I no longer wipe tiny bums. I’m grieving the childhood days.’: Mom learns to appreciate teen years, ‘there is beauty in every season of motherhood’

‘I can’t decide if I want a baby! I’ll ruin my career,’ my friend messaged. I was brutally honest.’: Woman ‘mourns’ loss of life pre-motherhood, ‘I gave up a lot, but I gained so much more’