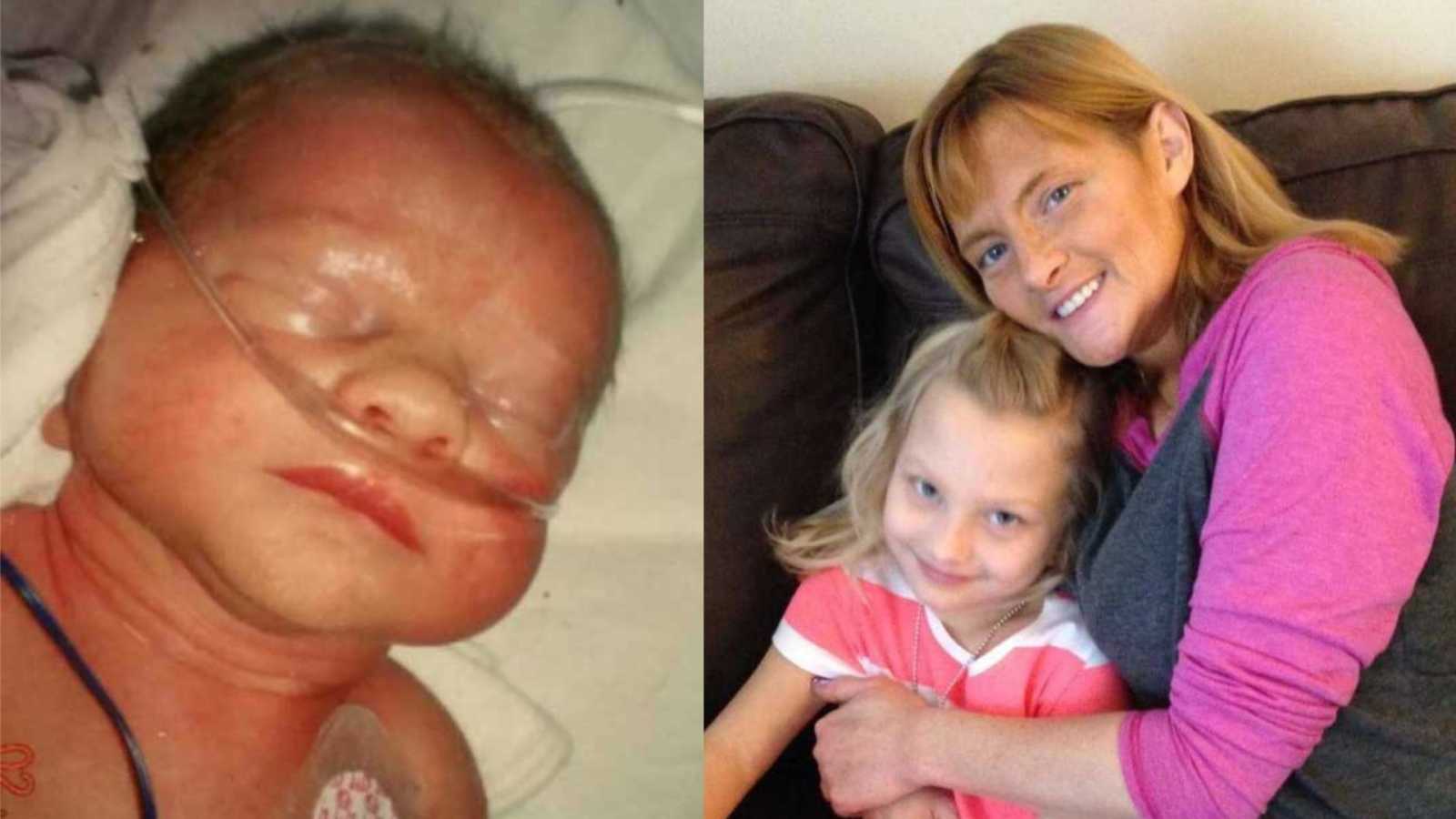 “I was raped 11 years ago and got pregnant. I looked at my pastor as my father. He was 30 years older than me and always knew the right things to say to make me feel like I wasn’t alone. I was married, and me and my now ex-husband were family to him and his family.

When my husband and I separated, my pastor and his wife were very supportive. He got closer and closer to me, but one day crossed the line and wouldn’t stop.

I found out I was pregnant and there was no one else. I was TERRIFIED. I don’t believe in abortion, so I felt trapped. How was I going to do this? Not to mention, I have Crohn’s disease. I was deadly ill the whole pregnancy and almost died. When I was 7 months, she went into distress and they had to do an emergency C-section. She had a stroke at birth and I had one a few days later. When I saw her, I realized she wasn’t his, she was mine. I knew I had to protect her, so my ex-husband stepped up to be her dad. We both knew that my pastor would destroy her. I was also terrified of what he would do to me if I told anyone. I knew it would be just her and I, and I was sick over what to do. Then the doctor came into the NICU and said the CT scan showed the soft lining wasn’t formed right and we had to do it again to see more. I thought, ‘Ok she will be fine. She’s so pretty and looks so healthy.’ A couple days later, that same doctor sat down and looked in my eyes and said, ‘It’s much worse than we thought.’ He said she will probably never walk or talk. I looked at him and thought, ‘What am I going to do?’ as tears rolled down my face. She was so pretty and helpless, and my body destroyed her.

She was born 2 months early with cerebral palsy.

I knew I would do anything I could to give her the best head start possible because I felt it was my purpose. I quit my job (I ran a company) and moved one hour away to be by the hospital so she could have therapy 3 to 5 days a week, and we did that for 5 years. It was just us, and through those years I broke 32 bones and had several surgeries, but still was able to make sure she got to therapy. She began to improve little by little. We had no help. I was living in government apartments and had no money but we did all we could to give her a future. She did things we never thought she would, but it wasn’t easy and it took 3 times longer. But with every new improvement, she gave us new hope. We rebuilt our life together. Her bio dad (the pastor) still tormented us and no one ever knew, but I didn’t see him in her. She is kind and a fighter and loves people. We volunteered places to show that we aren’t owed anything and visited senior centers so we would be grateful for what we have.

When she was almost 5, we moved to Warsaw, Ohio, a small town where she would have the ability to learn at her own pace and not feel less than others. She was so beautiful, but kids still called her retarded and she would smile and wave at them and say, ‘Look mommy, my friends!’ This was why we moved to a smaller town. It broke my heart to see her that way. When she was 6, her bio dad died suddenly, and I felt free. I finally shared my story and in telling the truth, I lost every one I ever loved, and so did she. It broke our hearts in ways I can’t express, but I held onto her. My ex-husband completely left her side also.

I realized that now it’s up to me to finish our story. I worked hard to get physically healthy so she would always have me and to make sure she had the best life possible. I taught a free art class to kids, joined the PTO, and in any way I could, rebuilt my support system and our lives. Katie loves people so we do random acts of kindness to show that others matter.

When Katie turned 9 she had to get an AFO, a leg brace, and was so embarrassed. We started our YouTube channel to explain her story and show kids that cerebral palsy is only part of who she is. It’s allowed us to help others and inspire them to know that what we do matters and to never give up. Every time she showed any improvement, we took that to know she can do more. We have been able to inspire kids to dream big and work hard and never give up. On our YouTube page, we talk about fun things but also how bullying makes you feel. We show quotes to inspire people and share our random acts of kindness to encourage kids to consider others first.

We have had some extreme lows that made us feel defeated, but one thing I always say in those times is, ‘You don’t look at the whole problem. Start with a part of it to fix, and piece by piece rebuild it. The YouTube is just an instrument we use to inspire people all over the world who may have been through some of the pain we have, and say to them that ‘it gets better, and your life matters.’

When Katie was interviewed for our local TV station, I stood staring at her like a slideshow of her life and all the emotions went through me. Hearing her say she just wants to help people know they aren’t alone and that their life matters was euphoric. I saw her whole life — the times I screamed into pillows and cried so loudly I thought I would break, when I was so sick and couldn’t get off the bathroom floor, or held her while she was having seizures, terrified I was going to lose her. I saw all the people who threw us away as trash and all the people who carried us when we fell. She has shown me that you never give up, shown me how to love unconditionally. To be grateful for all I have, and never forget about the broken people because I’ve been there. All the people who doubted us, you underestimated us. We don’t know how to quit, and this is just the beginning.”

This story was submitted to Love What Matters by Liz Walser of Warsaw, Ohio. You can follow them on their YouTube page, Katie’s Wacky World.

‘You were conceived in rape.’ She was gasping for air. ‘I don’t know who your father is. I’ve never told anyone this before.’: Adopted woman learns truth about her past, feels guilty for her own abortions

‘I was the victim of a rape. I had a professor who propositioned me, a boyfriend who passed away, a stalker, and cancer—twice. I’m no stranger to a painful past.’

‘One drink, I had one drink and after that, I remember nothing. My virginity was taken before I was ready.’ Woman’s powerful story overcoming boyfriend’s sexual assault