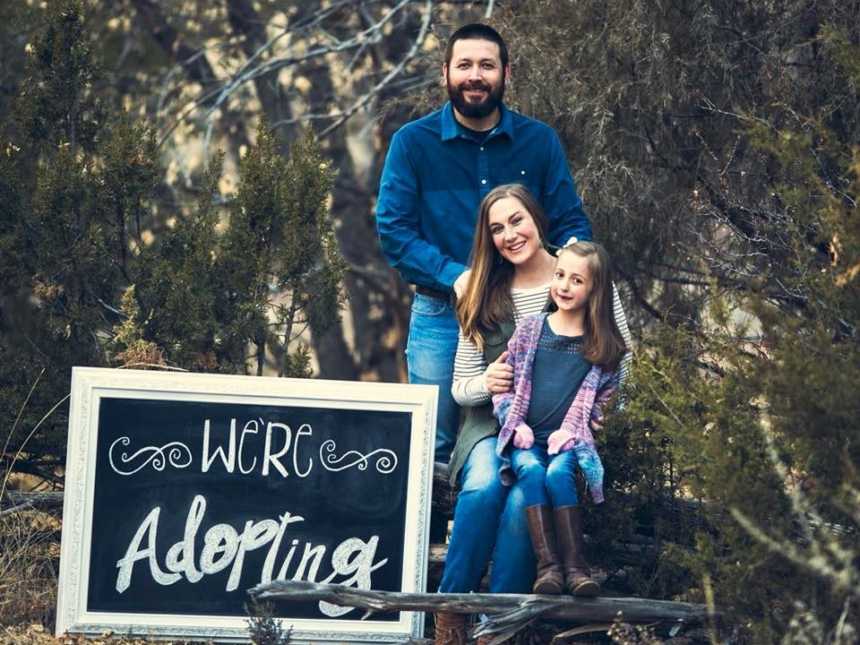 “My Daughter Zoey is an absolute miracle. I thank God for her every day. We had a positive pregnancy test just five months after my husband and I were married. No needles, no doctors, just two newlyweds that were in LOVE! My pregnancy with Zoey was very easy. No morning sickness, barely any weight gain. No crazy cravings. Everything was going great, and at 20 weeks we found out she was a GIRL! I had always dreamt of having a daughter. But around my 30-week checkup, things started taking a turn.

My doctor found ‘soft markers’ on the ultrasound. I had no clue what that was, and I was frantic. The doctors said it could be anything from Down syndrome to a heart murmur. She then diagnosed me as a ‘HIGH RISK’ pregnancy. And I had to go in for further testing and visit a high-risk ultrasound tech. They couldn’t pinpoint what was wrong so they just kept an extra close eye on me for the remaining six weeks of my pregnancy.

At my 36-week checkup, I had an ultrasound and I was then told that I would have to have an emergency C-section. My daughter was breach and low on amniotic fluid. Zoey was born October 21st at 8:17 a.m. Her legs were bent behind her body and that caused her to have hip dysplasia that required her to wear a brace on her legs for her first year of life and not walk until she was 2 years old. I was able to take one picture with her after my delivery and then off she went to the NICU for the next three weeks.

At her second month checkup the pediatrician was immediately concerned because she looked very jaundiced.  She then called the gastroenterology department at University of New Mexico Children’s Hospital. They scheduled us with the specialist for 9 a.m. the following day. We went to our appointment at UNM. The team of doctors and nurses examined Zoey and drew blood and the gastroenterology doctor was trying to explain to us what biliary atresia was.

After that appointment we went home and received a call to immediately return to the hospital because Zoey needed an emergency surgery or it could be fatal. We went back to the hospital and Zoey immediately received a blood transfusion. The very next morning my little 6-pound 2-month-old baby went in for a nine hour surgery confirming her diagnosis of biliary atresia, a rare infant liver disease that requires a liver transplant. Zoey wasn’t born with any ducts to release the bile from her liver.

Her amazing surgeon, Dr. Lemon, performed a Kasai procedure. The Kasai procedure should hold her over until she needs a liver transplant, which he predicts she’ll need around 18 to 21 years old. Zoey is 7 years old now and doing so well. She is now reduced to just one yearly visit to her liver specialist.

When Zoey was about 1.5 years old my husband and I discussed having another child. Zoey’s medical issues were so stressful, but things started calming down and we both were ready to grow our family. One year later we were pregnant! Unfortunately, I miscarried on Christmas Day that year. I received a ton of emails and phone calls from women in my family and friends that mentioned they too have miscarried and this is very normal and natural and that I should try again in six months. I was optimistic, and we started trying again.

This time, three years had passed and I had a few ‘chemical pregnancies’ but nothing that would ever stick around long enough for me to get an ultrasound. My husband and I decided to see a fertility specialist. We have gone through three different fertility specialists and all say different things about our situation. We did three rounds of IUI, and on our fourth try…. WE WERE PREGNANT!!! This too followed with a miscarriage. That’s when I decided to go for it and put all of my eggs in one basket (literally) and try IVF. My husband was on board for this one last try at conceiving. We both agreed if it didn’t work we’d move forward with adoption.

One round of IVF and nine viable eggs later… we were optimistic that this was going to work. Although days later we got the dreadful calls from our doctor that we now only had six embryos that made it, now only had four that made it, and now only had two that made it. And then, our two embryos didn’t make it to the sixth day. So there we were again, trying it the old fashioned way for one more year. I am now 37 years old and I went to one more fertility specialist one last time. She said that I did have a chance at conceiving through IVF, although I have high FSH levels (low ovarian reserve) and she recommended at least three rounds of IVF. Three rounds of IVF?! That is when my husband and I knew there was a line to be drawn. We would like to have a savings, pay off our home, send our daughter to college and save for our daughter’s possible liver transplant. Three rounds of IVF? NO WAY!!! Especially when I am already considered a high-risk pregnancy? I could easily miscarry again or have another complicated pregnancy.

That was when I came to conclusion that a baby is a baby. No matter what skin color or hair color or blood line the baby comes from, it is a living soul. This baby will come from God. That is when I understood why I miscarried, I understood why it was so hard for us to conceive. That is what I was called to do all along. I now know that our adopted baby is the exact soul that God intended to be in our family. This baby is already so very wanted, needed and loved by myself and our family. I desperately want the chance to be a mother again. Motherhood has been the most incredible blessing I have ever been given. Unfortunately, my body isn’t allowing me this chance to do it on my own, although my heart has been ready for 6.5 years.

It would mean the world to me to be a mother again. I will love this baby unconditionally, just as I do Zoey. Mommy is waiting for you…”

This story was submitted to Love What Matters by Jennifer Chavez, 37, of Santa Fe, New Mexico. Submit your story here, and be sure to subscribe to our best love stories here.

Do you know someone who could benefit from this story? SHARE on Facebook to help spread the word.