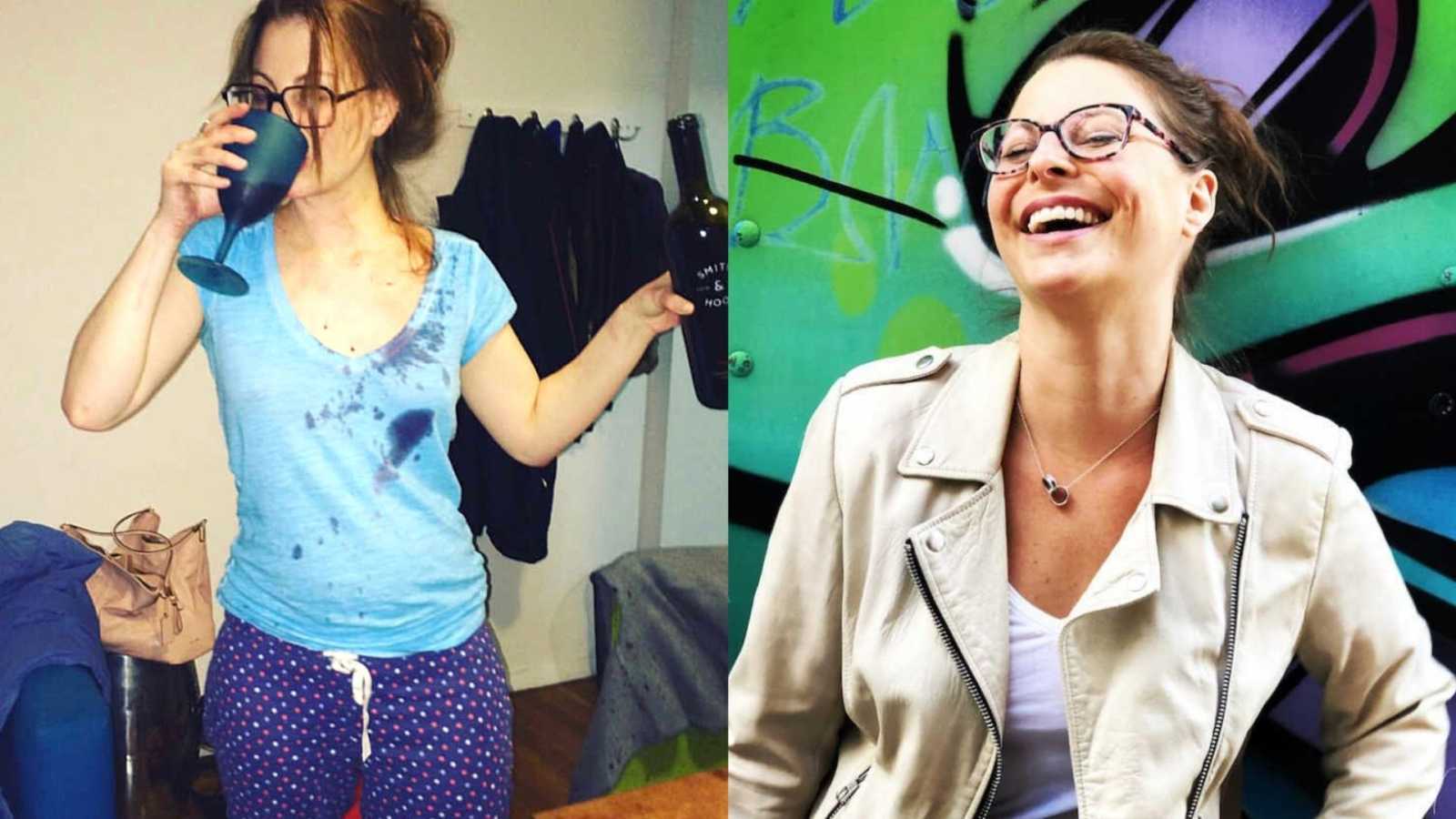 “‘When’ is a question I’ve become accustomed to in my over 2 years of sobriety. ‘When did it start? When did you quit? When did you know you had a problem?’ I appreciate the interest, but those questions are more loaded than anyone can fathom and use to be answered with me panicking to provide an acceptable answer to such a complex question.

I know what people wanted to hear. ‘I looked at my children and changed immediately!’ That’s the socially acceptable answer, but a flat out lie. I’m done lying and acting like recovery is like the movies with some crazy singular ah-hah moment where your children smile over some cheerios and the love makes you run to an AA meeting. Despite every fiber of my being loving my children, I clung to what I truly believed was my right to drink. Even with multiple ACS cases and my early 20’s spent racking up DUI’s, I didn’t see sobriety as anything but a death sentence.

The ‘when did you start’ is an easy one: 13. But I want people to grasp the ‘why.’ The ‘why’ is the most important part and where people will learn the great lesson: that trauma is an insidious and pervasive monster, willing to creep in and tarnish the rest of your life. All those things I ignored until my tenth drink, where I cried and babbled to the nearest bar patron like they were my therapist, are what kept me clinging to the security blanket I found in my formative years. I was raped at 13 and had always been labeled a problem child by my mother. One of her favorite things was to tell stories of how mean I was and had been since birth. Once I became a mother myself, her behaviors started confusing me and triggering me. I would picture acting the way she did to my own children and for the most part, try to drink the trauma away.

‘When did you know you had a problem?’ The acceptable answer would have been when I was in my 20’s, but when all your friends drink and drive, I just found myself unlucky. I was raising my first son, had a 4.0 GPA, and worked multiple jobs. Soon after graduation, I moved to NYC where I met a man on the flight that would forever change any and all trajectory I had in my life. I mean, what could go wrong meeting a handsome, British banker who moves you in 8 months later while lying about the wife he has in the UK…? A LOT! The domestic violence that followed and lasted in some form or another for 10 years was enough to break me.

Any chance I had to heal, slow down my drinking, and experience love became completely out of reach. I didn’t even feel deserving of my children’s love. I felt robbed. My knight was a narcissistic sociopath, another blow to a life already wrought with trauma.

‘When did you quit?’ January 1, 2018, a date where I made a literal life or death decision. My children had been begging me to quit and ACS was involved (most of their actions seemed to just trigger me more). Even worse, my mother, the root of my trauma, had been ordered to live in my home. That Christmas I spent alone, I walked to the bar on Christmas Eve and on the way, bought two bottles of tequila. After not seeing anyone I knew at the bar, I went home with the plan to drink the holidays away. 2 days later, I woke up to all my pills missing and two empty tequila bottles. My boyfriend came over to find me unwashed, eating a stale gingerbread house, and feeling near death. I spent the days until January 1 imagining the damage I almost did to my children. My father died when I was 18. I know the loss of a parent, and my favorite uncle committed suicide. I know the hole it leaves.

Quietly and solemnly, I made a vow to myself. I would not drink until things were sorted. At the time, saying I will not ever drink seemed too big. It was the start that changed my entire life.

Breaking up with my first love, alcohol, was just the first step, but it opened a beautiful pandora’s box of healing and growth. Not just for me but my children, as well. I finally was able to make boundaries in my life and identify toxicity. This meant breaking ties, familial and socially. The biggest turning point was getting involved with the sober community on Instagram. This is where I found the people who would give me permission to accept my past and love myself. I started to learn about narcissistic mothers and things became clearer. I didn’t feel judged for cutting ties with toxic family. I started to forgive myself and watched as my children began to forgive me. They celebrate my sobriety with me and couldn’t be prouder.

The mom guilt was real and the embarrassment I caused them and myself had previously kept me sick. But now, I look forward. My children no longer worry every time I leave the house if I will come home or if I’ll drink and forget to sign their homework. We aren’t financially strapped. We’ve taken wonderful family vacations and they have been able to participate in sports.

I’ve chosen to use my Instagram platform to share my story. Not the neat pretty version, but the one that shows sobriety and healing, even the bad days included. Any day without a hangover and the anxiety, regret, and shame is a win but doesn’t mean life still doesn’t suck sometimes. I have found, sober, the bad times are shorter and I can actually objectively tackle a problem. Recently, my youngest son contracted COVID on his summer trip to Anchorage, and I am in NYC with my oldest. If I relapsed, no one would blame me. Feeling helpless and terrified, my community reached out and helped me understand I can only control so much, and helped me figure out a plan of self-care to keep my sanity and sobriety while the situation unfolded. When I was encouraged by the sober community to go get my nails done, I won’t lie, I was a little thrown. But if there is one thing the sober community realizes is we can’t fill other cups when ours are empty.

Gratitude is an amazing part of my life now. Even on my worst day, I can find the silver lining. Reframing my days, memories, and story is currently where I am, at using mindfulness and manifestation work. I can’t change my past, but I can understand it now. I was an extremely broken person who had survived multiple rapes, abusive relationships, and an addiction that almost killed me. I am not anything my abusers called me, and I am definitely not defined by my addiction. Life no longer happens to me, but with me, as I am an active participant.

I grew up trying to get out of my house every chance I had. I am smiling writing this… My children WANT to be with me! I honestly did not think that was possible at 12 and 16. We have inside jokes and favorite TV shows. I get spontaneous hugs. When you grew up with hugs were off-limits and I love you’s not a part of the dialogue, it is something I am so proud of. Without that first step of leaving alcohol, I would not have this life I have now. I would either be dead or still lost in my own mind, self-medicating with alcohol. With full gratitude, I thank everyone who contributed and still contributes to my growth in sobriety.”

This story was submitted to Love What Matters by Martha Duke. You can follow their journey on Instagram and their blog. Do you have a similar experience? We’d like to hear your important journey. Submit your own story here. Be sure to subscribe to our free email newsletter for our best stories, and YouTube for our best videos.

‘I awoke to no vision in my right eye. The last I remember was sitting on a lobby floor, half dressed, my friend begging me to stand up.’: Woman overcomes decades of alcohol abuse, now nearly 2 years sober

‘I found his gun while blacked out. I held it to my head, trying to pull the trigger. His roommate ripped it away.’: Woman’s life has changed ‘drastically’ since becoming sober, turned her ‘nightmare’ into a ‘blessing’

‘You need help.’ I got her from preschool, pulled over ‘to rest,’ and woke with officers knocking on my window.’: Mom-of-4 finally gets sober after being institutionalized over 20 times, learns she is ‘not alone’