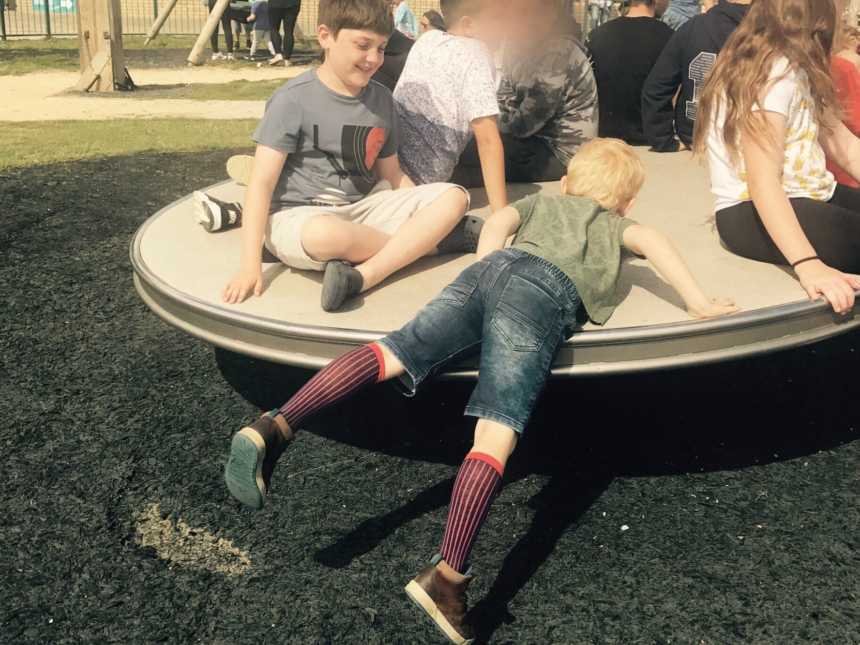 “I saw you today, but you didn’t see me.

My son, was attempting to get on the merry-go-round/spinner that you were all playing on but it was going too fast for him. He waited patiently at the side whilst trying to decide whether to approach. He doesn’t have the confidence you have, neither does he have the physical ability to enable him to jump on whilst it was spinning so fast.

I slowed it down so he could get on and he laid face down in the middle. You may have thought that odd but I know he loves the movement and likes to get as close to it as possible. The gentle hum of the equipment was no doubt soothing to his ear.

More children got on and he moved his position so he sat upright, imitating the behaviors he saw before him. He stayed silent initially, which he often does. He was simply taking in the world around him.

You were all quite boisterous, as 9 year old boys generally are. Laughing and chatting amongst one another, yet my son didn’t join in. The ride was fast and the chatting was faster. He didn’t quite fit in, but you were all oblivious.

I was silently praying that none of you would notice the obvious differences while you were all interacting. So many times, the playground has been our enemy where children and adults have stopped and stared at my son’s flapping or when they have heard him speaking, that it sounds slightly different to their voices.

So when he started laughing as you all kept hopping on and off and he shouted, ‘Can you push faster?,’ my heart swelled with pride. He knew the right words to say and had the confidence to say them. He wanted to be part of your fun, but you just didn’t hear him.

He jumped off and bellowed, ‘Watch this, I’ll push it fast!’ but you all kept on playing together, unaware of the significance of my son’s enjoyment and communication. I wanted you to know my son has a disability that you may have heard of but not understood; autistic. For him, the interaction and conversation was a massive step in his development.

Although I had wanted desperately for him to be part of the fun, I realized soon after he had, just on another level. He is used to playing alone but today he was playing alongside you and I realized how far he had come.

This story was submitted to Love What Matters by Tina Medlock of Yorkshire, United Kingdom. It originally appeared on her blog, Joseph and his Amazing Spectrum Coat. Submit your story here, and subscribe to our best love stories here.

Give other moms strength and courage who are continuing to learn about their children with autism. SHARE this story on Facebook.