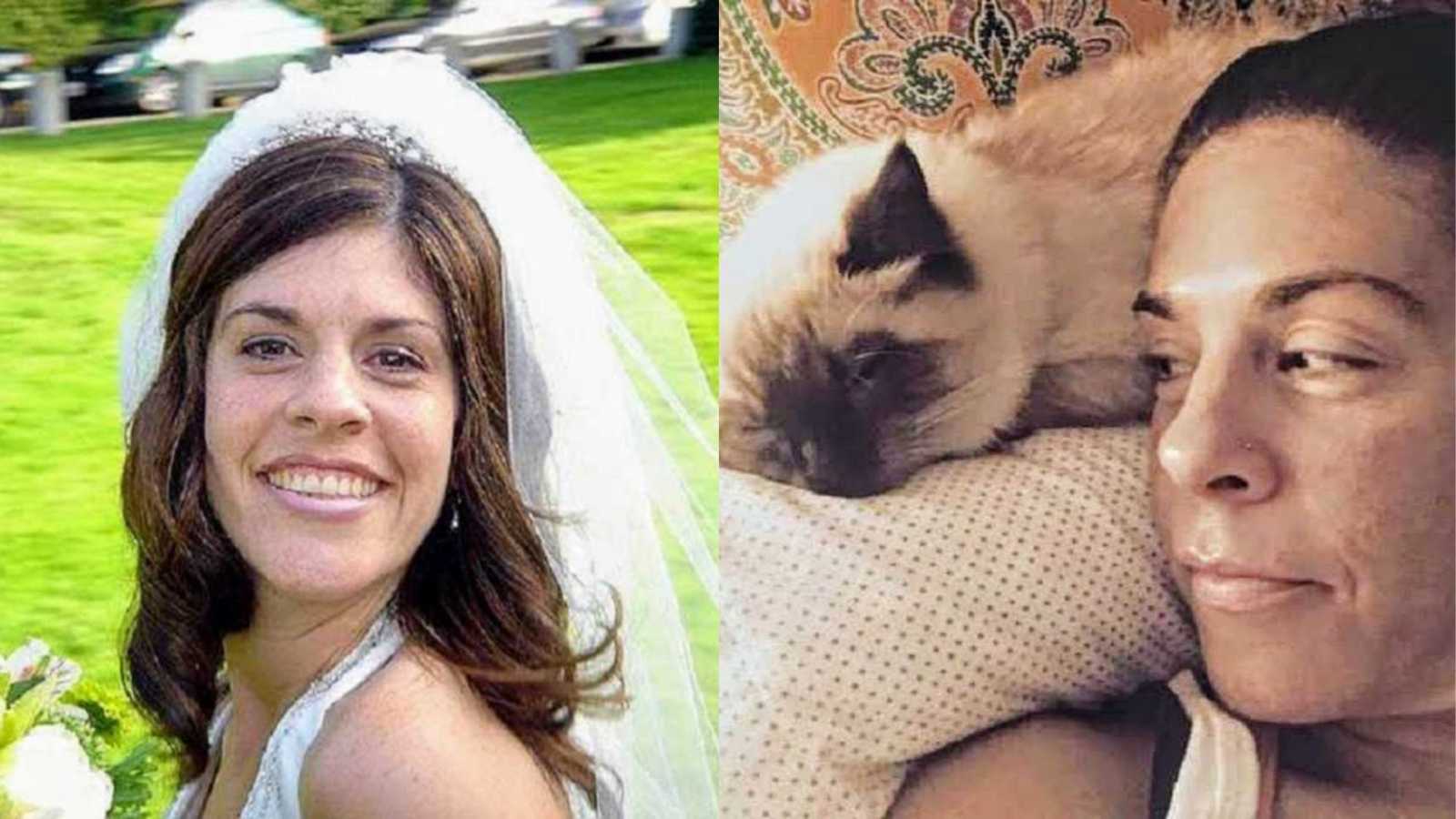 “As I approached my 30th birthday, I was deathly scared that I would be alone forever and never get married.  I’d ask myself, ‘Am I too old for love? And if not, where is he?’ Confusion and stomach aches were a normal part of my life. I lived with them daily as I tried to mentally figure out what I was doing, where I was going, and how I could do any of it better. ‘He’s not here yet, so I must be doing something wrong,’ I thought to myself. I was a successful nurse and owned my own home. I felt ashamed to be approaching 30 not yet married.

I decided I needed a change in my life and I felt inspired to find that change. I got on MySpace, went to a local single’s mixers, and joined an underdog sports team. It was on a Tuesday night playing mini-golf, when I met my husband.

For six weeks in a row, we had a weekly date full of laughter, golf, and beers. I was led through multiple layers of intoxication, as I discovered things that absolutely attracted me to the bad boy in him I could fix. I found out he was six years younger than me, a golf pro, and a wannabe comedian who would say the most inappropriate and random things. He was tall and handsome with an infectious laugh, and blue eyes that penetrated into the depths of all sorts of places. I didn’t care he had never lived alone or took care of himself. I was a nurse and used to taking care of other people. I was finally happy and he slid into the missing puzzle piece of my life. We were married a year later.

Three months into our marriage, things started to go downhill quickly. My husband quit his stable accounting job to pursue a career in film making, even though he had no experience and no job offers. I became the sole provider and caretaker of the home. I did all the laundry, the dog walking, poop-scooping, cleaning. I made the bed, folded the laundry, got the mail, and paid the bills. When I finally put my foot down and told him I was going to stop doing his laundry, he replied, ‘We will see who will win this. I have enough underwear to last me a month. I think you’ll break before I will.’

Was this all marriage was? Daily chores, arguments to win, financial imbalance, and unmet expectations? I had read the book ‘Relationship Rescue’ by Dr. Phil determined to make my marriage work, as I didn’t want to fail. Starting at only 6 months of marriage, we entered marriage counseling.

I remember how it started, with the therapist asking us both, ‘Where do you see yourselves going together in this marriage?’ My 24-year-old husband confessed that he thought the hardest part was simply asking me to marry him and he didn’t have any direction for us to move towards together. He felt that having kids made you dead inside. He said he was in a selfish phase and just wanted to be a creative artist. When I responded that I needed him to get a job, my husband told me that I cared more about money and didn’t care or really know who he was. He further blamed me, saying the reason he didn’t have a job or success in his life was because of me. I wouldn’t take him to California, so he could begin his life as a video/film producer.

I felt angry, trapped, and resentful of his words, but there was an even bigger part of me that wanted to call his bluff. So, we moved. I rented out my house and moved all of our belongings to California.

A week into California, in a quick turn-around, my husband flew home to Seattle to work on a film project he never told me about. He spent two weeks in Seattle by himself, in a ‘cabin in the woods’ where he didn’t have cell reception. He would contact me once a week for a few minutes, when he had reception. Although, receipts for bars and a motel showed up on my credit card statement. Two weeks later, he flew back to California, cell phone in hand. When I picked him up from the airport, he was too busy texting her to talk to me.

We went back to the apartment I had rented for us and I demanded that he show me the thread of non-stop texts from him to her. He told me, ‘You’re not going to like it.’ Shaking and my heart pounding, I grabbed the phone out of his hands and scrolled through the comments of ‘I miss you, what are you wearing, what are you doing, are you still thinking of me, when do I get to see you again.’

And that’s how in the summer of 2009 at the age of 32, the universe brought me to my knees, or rather it was my husband, who drop kicked me to the floor of our apartment in San Francisco during a domestic fight over avocado sushi and this mysterious other woman in his life. I don’t remember how it started, but I remember dodging around the flying silverware and tuna and avocado sushi. But, most importantly, I remember lying on my back with my husband’s hand on my throat and instead of praying to the stars, I was praying to the constellation of soy sauce spatters on the ceiling. In an instant and with a clutch of fear, I stopped fighting as I heard myself say, ‘Let go.’ And so did my husband.

I woke up the next morning feeling out of body and emotionally numb. Looking in the mirror, I could see multiple oblong purplish bruises on my throat in the outline of my husband’s fingers.  I didn’t tell a soul what happened; I couldn’t muster the courage. I wore turtlenecks and scarfs to work for a week. I did, however, transfer what little money was left to my own bank account, broke my apartment lease, and called my dad to tell him, ‘I’m done.’  His one-word response? ‘Finally.’ My dad drove from Seattle to San Francisco to pick up me and my belongings, and we headed home.

I never questioned my decision to divorce him. I never considered staying to work it out. I had already drained my energy and my bank account trying to work things out. My divorce was finalized on August 9, 2010….the day I refer to as ‘8, 9, 10…The END.’ But it was the beginning of me.

Self-care became my priority after that. I started running and decided to train for a half marathon, something I had never done before. I hosted a divorce party with my friends and donated the proceeds to a local women’s shelter for domestic violence. Nervously, I got on a plane and took my first solo trip abroad to Australia, a moment that helped me know I could accomplish anything on my own.

I discovered freedom of self-expression and self-reliance. I plugged myself into spiritual groups, learned tarot, opened myself up to the wisdom of the universe and all its blessings. I found my joy, a newfound confidence, and a sense of accomplishment. Finally, I was doing things for me, taking care of myself, exploring different outlets, and learning about myself.

It’s been 9 years since my divorce, and I’ll be honest, those 9 years were hard. Really hard. Doing the deep inner work to heal is not for the weak. Some days brought sadness so deep, I wasn’t sure I wanted to wake up the next morning. But my fierce independence, inner strength, spiritual faith, my family and friends, and my beloved cat Simon kept me going.

Today, I take myself out on dates. I buy myself flowers. I toast Champagne. I travel the world independently and I am no longer a prisoner to fear of being alone. Through it all, I am happier than ever because I found my inner peace and belief in the person I’ve become. I’ve learned how to forgive, trust, and listen to my intuition. I’ve discovered the things that light me up, that fuel my soul and what I’m most passionate about. For those who are curious, I am now 42 and have not found my partner in life, but I stay open and in love with me.

And as they say…my story isn’t over yet.”

This story was submitted to Love What Matters by Jenn Maronek of Seattle, Washington. You can follow her journey on Instagram and her blog. Submit your own story here and be sure to subscribe to our free email newsletter for our best stories.