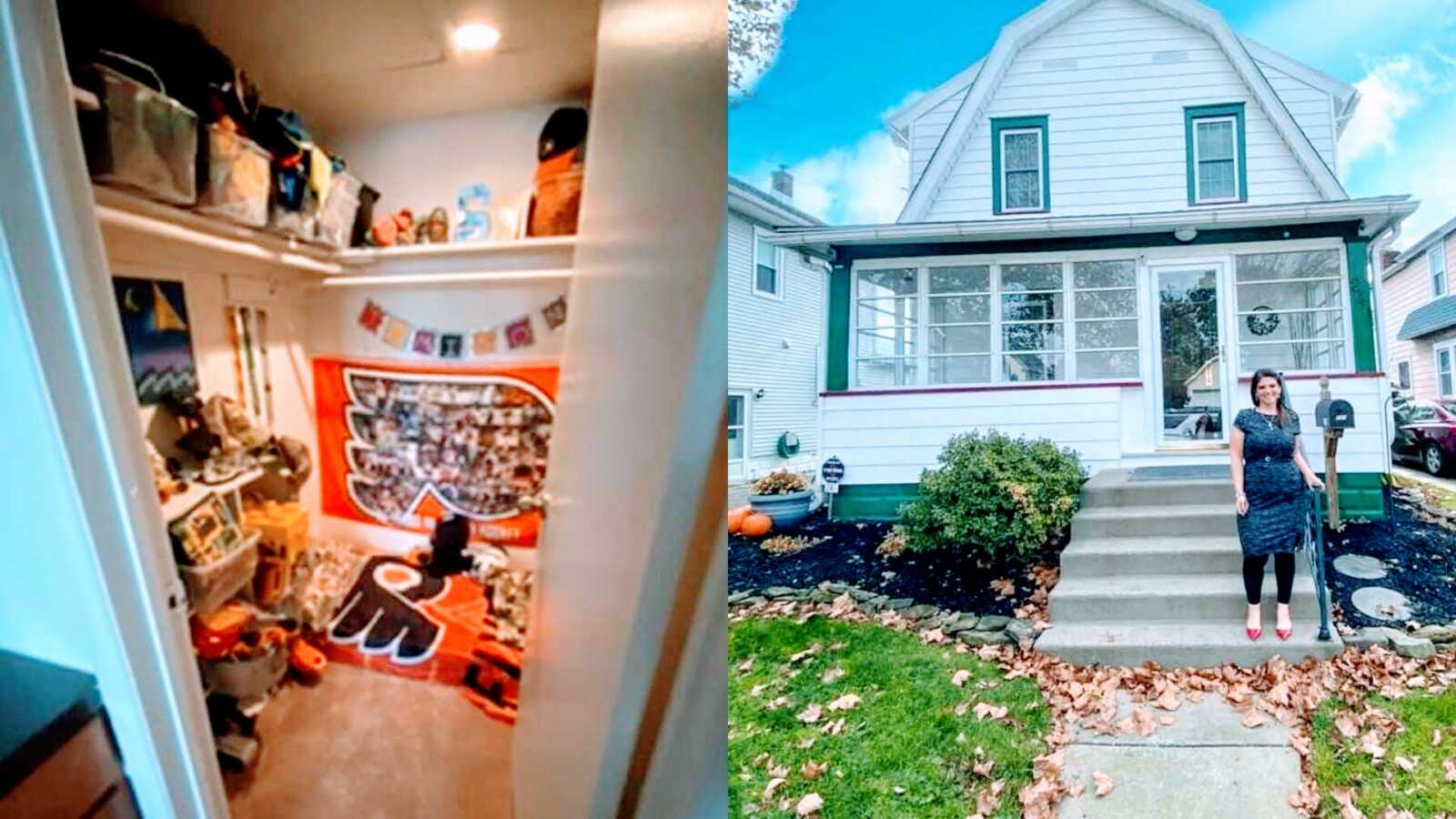 “I want to talk about hope. Specifically, hope in the hopeless parts of life.

The ability to march on. And, on.

I often used the phrase ‘a tiny million confetti-sized pieces’ to describe the remnants of my existence.

My husband and significant other, since the age of 17, left when I was 4-months pregnant with our 3rd child.

I was pregnant and parenting two other children (one with Autism & ADHD and the other a 3-year old toddler.) Alone.

I spent months, months, curled up on the floor in complete darkness begging the universe to help.

To stop the pain.

My daughter was born early. I wasn’t prepared. I mopped the floor 5-minutes after walking in the door with her. People couldn’t come to see her with a dirty floor. They would see the mess in my heart and soul. I remember refusing to let my mom stay the first night home. What was the point? She wouldn’t be there the second night. I marched on.

Not long after my daughter was born, my dad unexpectedly died. Night after night I put my 2-month old in her chest carrier and marched into the hospital.

I had no idea how symbolic this would be of my life. Heartache after heartache and marching on.

Before my daughter’s first birthday, my marital home was sold. At the time, I couldn’t afford to keep it. I moved back home with my mom ‘temporarily.’ For 18-months myself and my 3-kids shared one small bedroom. I slept in a twin-size bed with a 5 and 1-year old for far too long. We ultimately bought a pull-out cot.

Eventually, I met with a ‘mortgage guy.’ Not liking their answers I met with many more mortgage professionals. I learned and eventually accepted that despite my almost 10 years of education and good career,  I didn’t make enough money to (ever) be able to buy a house alone. I marched on.

I started a second job almost immediately.  That still wasn’t going to be enough.

A third job it was.

It is not lost on me how blessed I am that everything but my main day job is work from home.

Tired and weary, my confetti-sized pieces of life started to gather together. They were held together with school glue.

Life marched on. I added an on-call phone for work. I was, and to this day still am, always on call.

As for my kids, my oldest son had behaviors I had never seen before. Autism and change and loss. It’s a very hard world. The rage. The 911 calls. The entire street full of police. A 12-year old kid being placed in handcuffs to protect himself and everyone else. The too-familiar drill of throwing my babies at whoever could take them at the moment to follow the ambulance or police car. The nights in crisis.

The years in crisis.

I marched on. As the confetti pieces broke off, I learned to add some rubber cement.

We had to, again, move. This time it was March 2020. The last weekend before Covid shut the world down. We needed an emergency place to live. I called every apartment complex in town. I went with the only one open on a Sunday. I had paid for a hotel the night before. I threw it on a credit card. But, hotels are expensive and enough was enough.

I rented that Sunday. My first time as a renter – ever. A two-bedroom apartment with a large walk-in closet that I could make a safe and fun hiding/playing spot for my then 6-year old. He could hide from his older brother’s rage if need be. And, a teeny tiny place he could call his own at the age of six.

We moved in, I had nothing. Not a single dish. Not even an air mattress.

I marched on. I sent out an SOS flare and Facebook Marketplace and the world’s BEST friends filled our apartment quickly.

I loved my apartment.  I hung artwork from the kids and photos of our life. It truly became our home.

But, it was two bedrooms for 4 people. As my kids grew older it was clear that we were quickly outgrowing 800 square feet.

My middle son had one friend over one time. I was hesitant to agree but this was his best friend. My son was so proud to show him his toys and shark collection. I overheard the boy ask my son why his stuff was in a closet. He explained that he ‘didn’t have a bedroom,’ just a closet. My heart shattered.

Sometimes we try so hard and seemingly get nowhere.

Sometimes even our best is not enough.

Not too long ago, one of my best friends asked me to go take photos of one of her upcoming real estate listings. The real estate market is on fire and she is a rockstar career mom. She also does pretty much anything I need with my younger kids. It was a ‘sure whatever you need’ situation.

As I exited my car I was greeted by a man who was telling me about his home. ‘Please don’t mind the camper in the driveway, it’s where I’m staying now that we’re getting divorced.’ I chuckled at the universe and then told the story of how I lived in a camper once. How once I knew we were going to have to live at my mom’s – I financed a camper for her backyard. In my naive mind, I believed it would be a quiet and safe spot for my oldest son to decompress. In my mind, the idea was brilliant. I redid the camper and made it ‘home.’ Except campers aren’t meant for New Jersey winters. Or, full-time living. And, draining the sewage is really hard if you have a public sewer. Oh, and local code enforcement says no. I wasted so much time, energy, and money on a camper.

I ended the story to the man with this: it gets better. I swear it does. Not perfect. Not even close. But, better. ‘I was exactly where you are not that many years ago.’ But, now, I’m buying my dream house in a few weeks. A house I literally dreamt of every moment as I marched through hell.

I’m not here to sell you toxic positivity. Nor to tell you that everything will be perfect. Nor that bad things happen and then bam the rest of life is unicorns and sunshine. Or even that life is fair. That would be a lie. A bold face lie. Life is insanely unfair.

Even as I prepared to buy my house. A house I worked so hard for – nothing went as it should. Nothing.

My engine blew up in my car. I rented a car for over 3 months. Not a fancy rental car, but a peer-to-peer car with 100,000 miles on it and a rattle. I couldn’t finance an engine until I settled on my house.

And, settling on my house was such a long and hard process of marching on. The week before settlement it was discovered that I couldn’t use the $10,000 first-time home buyer’s grant. It was an all too familiar feeling of best-laid plans falling apart, again.

Even closing on said house was a disaster. Wednesday settlement became Friday at 12 p.m. 12 p.m. became 2 p.m. I didn’t march on though. I couldn’t. I sat in my rental car. For hours. Begging God and the universe for a break.

Here’s the truth. There are moments and seasons of this life that will break you. Where you will be on the floor in the dark sobbing and begging for the strength to just make it through the night. For the strength to see the next day.

People will fail you.

Life, even at its best, is hard.

Because, every now and again there are moments like Friday, November 12th. On that day I bought my kid’s their forever home. A place they can have friends over and not be embarrassed. A place where we will carve pumpkins and decorate Christmas trees and watch movies outside under the stars. A place that no matter where life takes them, they will always be able to come home.

Once we (finally) had the keys my now 4 and 8-year-old ran inside their new home. They ran upstairs to pick their bedrooms. Their first bedrooms. Ever. They squealed at the space.

Life is hard. Sometimes, unfairly hard. But, there are moments that, undoubtedly, make it worth living.”

This story was submitted to Love What Matters by Jacqueline Waxman and originally appeared here. Submit your own story here, and be sure to subscribe to our free email newsletter for our best stories, and YouTube for our best videos.

‘He’s out of control. You didn’t discipline him and now it’s too late.’ I bought into what everyone else was saying.’: Mom urges ‘special needs behavior cannot be fixed with traditional discipline’

‘You asked me this morning, on your birthday, ‘Why did those people blow up New York?’ I was unprepared for this moment.’: Mom shares open letter to 9/11 baby

‘We can bring your Leprechaun trap a day late, okay?’ I see the disappointment in his face, pull over, and ugly cry as the mom guilt sets in.’: Mom shares important reminder ‘we’re doing the best we can’