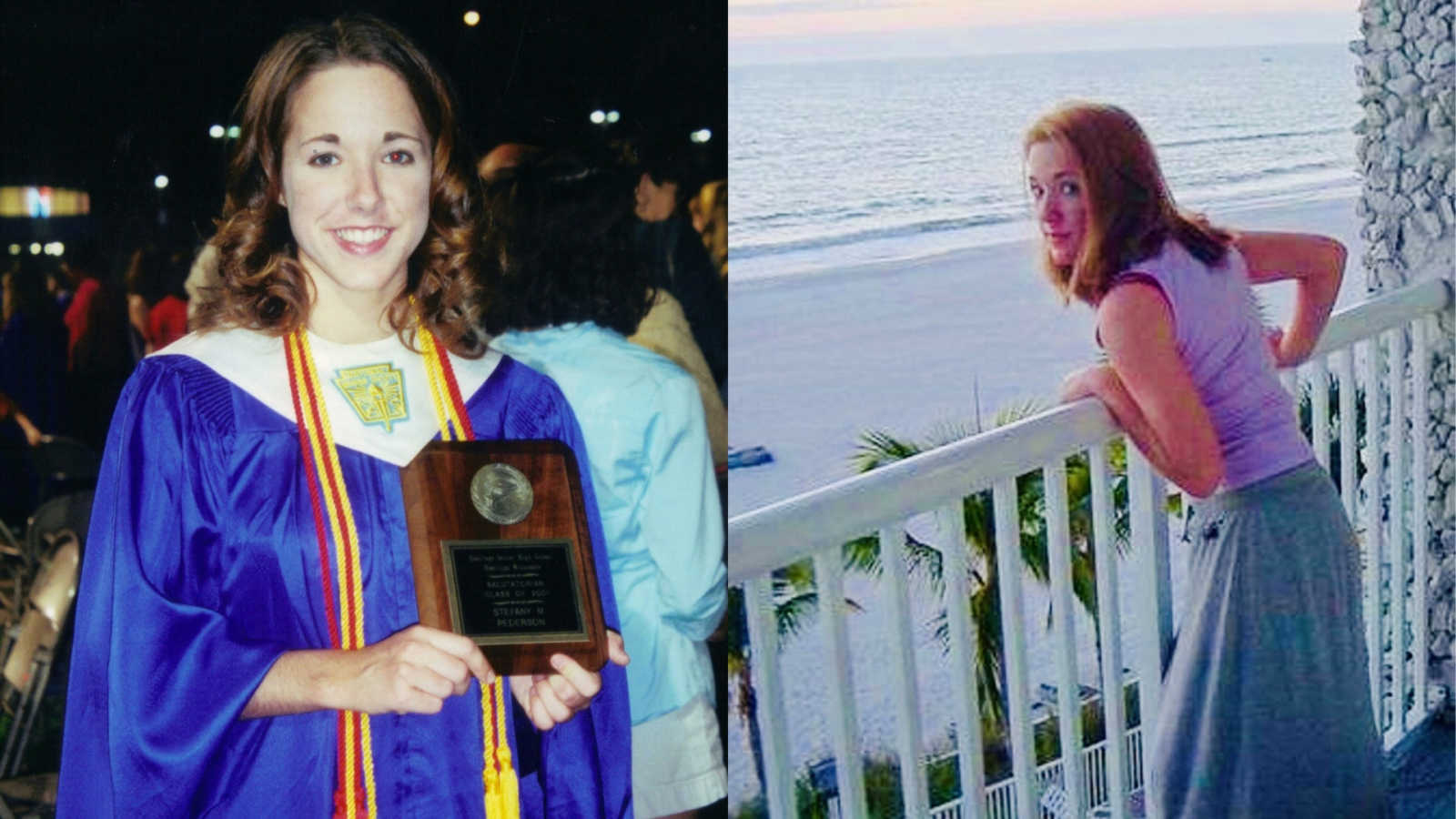 “I consider myself a smart person, always have. I was in the top of my class in high school. On the honors track, never worried about getting into college. I knew I could go where I wanted. And yet, thinking back to those moments where I was sobbing in my dorm room while my boyfriend across the country was screaming at me, I can’t help but wonder… how did I let that happen?

Fast forward to now, I know lots of women who have been in abusive relationships, sadly. Smart, talented, amazing women. I could say love is blind. Sure. But I don’t think that’s what it is. I think it’s that we have empathy for people who are struggling. We see the good in them. We want to believe we can help that part blossom. We can stand by them while they become the best version of themselves. Eventually we all wise up. Eventually.

I’ve struggled with a lot of things over the years. I was diagnosed with scoliosis in 2nd grade and had to wear a back brace. This prevented me from being able to sit on the floor. I stood out. Luckily kids that age are pretty nice. They were just jealous I got the comfy teacher chair. Not long after that I had braces on my teeth and glasses. A lot of my friends did too, that helped. Then came the acne. It was bad. I tried every drug imaginable. Put my skin through hell. It kind of worked. But then on the bus one day, a girl yelled ‘moustache b*tch’ at me. Turns out I had PCOS, but I didn’t know that yet. The bad acne, the weird hair growth, an inconsistent period. It would have a fix. But from that day forward, I was terrified every day on the bus. I hoped and hoped that girl wouldn’t get on the bus. She was scary. She got in fights in school. I was not that girl. I was 100 pounds sopping wet. I knew I didn’t stand a chance. I shrunk down in my seat and became as small as I could possible could. Maybe she won’t see me…

That was my M.O. I turned into a wallflower.

Peter was a high school friend of a girl on my floor. She was from Texas. He went to school in Florida. He came from Texas money. I still don’t know what his dad did. We started off chatting online. Remember AOL instant message? This was its heyday.

He was funny. Sweet. He thought I was pretty. Let’s be honest, he showed interest in me. And he was a boy. This wasn’t a thing that was happening to me in my real life. We were both virgins, which weirdly mattered a lot at the time. In my isolated world in high school, the majority of my close friends were all virgins. Religious. Saving themselves for marriage. In college, I was an anomaly.

He would sing to me on the phone while he played guitar. We started a thing where I would write song lyrics and then we would sing them to music he wrote. He always criticized what I wrote. I didn’t do it right. What should have been fun and cute often turned into tears. Red flag.

Until this point, we hadn’t met. I asked my parents if I could go down to visit him over fall break. The answer was no. So naturally I bought a ticket and went anyway. He picked me up in his fancy car. Rented us a beach front hotel with a balcony. We had our first kiss. It was perfect.

We went to dinner. Held hands. Talked and laughed.

Then he was yelling. At the waiter. Hands flailing.

My eyes got wide. I shrunk into my chair.

I didn’t even hear what he was saying. My brain was screaming at me to make it stop. To fix it.

I interrupted. I smiled. The waiter walked away.

His eyes softened. He was coming back to me. And then it was like it never happened.

But it did. Red flag.

I cried when I flew home. My mind already figuring out how I would transfer to a school in Florida.

When I got back to school, things went back to normal. Emails. Instant Messages. Phone Calls.

‘Stef. Where are you? Why aren’t you answering? Is everything okay? Call me back.’

‘STEFANY! Are you out with someone else? Don’t you love me anymore? CALL ME BACK!’

Finally, I just went home. I was stressed out and distracted. My screen was full of pages of instant messages. Furious emails in my inbox.

I typed a message. ‘Hey, I’m home. Everything is fine. Nothing to worry about.’

‘WHAT THE HELL, STEF. YOU DIDN’T ANSWER MY CALLS.’

‘I was out with friends. I have a life here.’

‘Oh I see, EVERYONE IS MORE IMPORTANT THAN ME NOW!’

Him yelling. Me crying. It became a trend. Red flag.

My friends told me this was crazy. I was missing out on real life because I sat in my room on the phone or on the computer. ‘He’s not nice to you,’ they said. ‘Oh, he just gets frustrated,’ I’d say. Constant excuses on my part.

For New Year’s I went to Dallas and stayed with him and his family. Had a big New Year’s party. Met his friends from high school, but when it was just us, there were more tears than smiles. At one point we were watching the Mavericks play on TV. Apparently, the ref called a bad shot. He threw something across the room. He raised his hand. I cowered into the corner of the couch, afraid he was going to hit me. He noticed my wide eyes and must’ve realized in that moment what I thought and laughed. Red flag.

When I got home one of his friends reached out to me. He was worried about me. Warned me about Peter’s temper. Told me to be careful. I didn’t tell my friends. I knew what they would say. Red flag.

Fast forward to that spring. There was a party for my birthday. He knew about it. Weeks in advance. ‘I’m not going to be available that night,’ I told hm. Maybe you should make plans so that you’re busy too.’

Dinner ended, and we went back to campus to go to The Dive. It was the on-campus dance club Friday and Saturday nights.

I burst into tears right there in the middle of the dance floor. I go home. My friends beg me to stay. ‘But it’s YOUR BIRTHDAY! You love your birthday!’ ‘Sorry…’ I mumbled as I walked away.

I got home and called him.

‘It’s late! I was worried! WHO WERE YOU DANCING WITH?!’

‘Peter, I’m really sorry, but I don’t think this is going to work. We have to break up.’

He starts sobbing. ‘You can’t break up with me! I’m going to kill myself!’

I start crying. ‘Don’t be silly. We’re just too far apart, and I can’t be home all the time…’

I back peddled. Okay okay, we’ll figure it out.

Repeat this conversation every couple of weeks for a month.

My friends quit asking me to go out. I just sat it my room and talked to him. It was easier than fighting. I had allowed myself to get trapped.

Until one day in late April. This conversation was happening as it always did.

Something in me snapped.

‘You can’t put that on me. You need help. I’m not your person anymore. I’m going to call your mom and your roommate if you’re serious…’ Click. He hung up.

So I called his roommate. ‘Can you please go down to the pier and get him to go home? We broke up. I’m not answering anymore.’ He said yes. I called his mom. ‘Peter and I broke up, but he threatened to drown himself in the ocean. I asked his roommate to go get him, but he needs help. I thought you should know.’ And then I turned off my phone.

It was the proudest moment of my life. Then I blocked his email address and instant message profile. Walked out into the night, and found my friends. I didn’t even have to say anything when I found them. They knew. Because I was out, and I was smiling.”

This story was submitted to Love What Matters by Stefany Rowe. You can follow her journey on Instagram. Do you have a similar experience? We’d like to hear your important journey. Submit your own story here, and be sure to subscribe to our free email newsletter for our best stories.

‘I got a text from him saying, ‘What are you smiling at?’ And I froze. The hair on the back of my neck stood up. Where was he?’

‘I spent nearly 12 years with a man I never should’ve married. He never touched me. We fought about my weight. I was immune to anything but pain. And then I met Adam.’