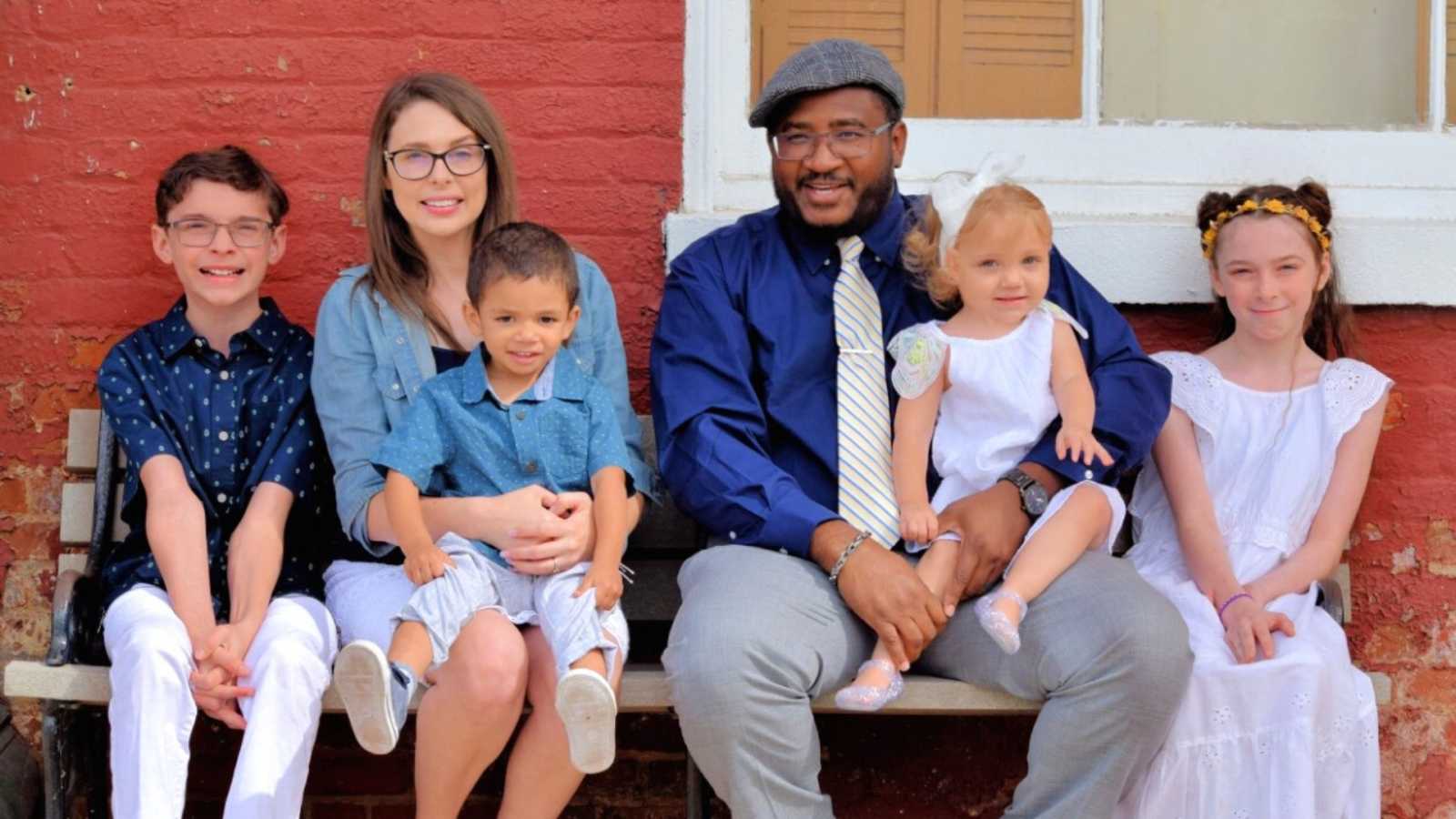 “One thing foster care has taught me is love outweighs fear. Every foster parent has heard the phrase, ‘I could never foster, I would get too attached!’

Our first human reaction to caring for a child that may one day be taken away is fear. But the moment you meet your foster child, you realize it doesn’t matter if your heart breaks. All that matters is this child feels love and knows what it means to have a family. Yes, your heart might be broken in the process but they are worth it.

When my husband and I met, it was like we had known each other forever. We were opposites in so many ways. But we shared the important things in life: our goals, dreams, and our faith. We had both been married before and had both divorced so we both knew heartbreak and what it was like to start over. I had two biological children and the way he treated them let me know he was awesome with kids! On our first date, he actually took all three of us to Cold Stone Creamery for ice cream!

We dated for about a year and then in 2016, we were married. Right away, we started talking about opening our home to foster care. I had fostered before so it was on our radar from the beginning. We began the process of getting licensed and in 2017, we were officially foster parents and ready to begin welcoming our first foster placement into our home. I will never forget that day. I was at work and our agency’s number popped up on my caller ID. We had said we would start out fostering one child but the call was for a placement of two kids, ages 1 and 2. I called my husband telling him they had called but, ‘Surprise, it’s two kids, not one!’ He said, ‘Tell them yes, we will do it!’ And that was the beginning of our adventure.

I made it home right before they got there. The 2-year-old little girl walked in and said, ‘Hi, Mom!’ Then looked at my husband and said, ‘Hey, babe!’ Her personality was special. They were both the sweetest kids and they ended up staying for several months and then we had to say goodbye. We were heartbroken but we wanted what was best for them and trusted God would be with them.

Packing their things was hard. Seeing their little clothes leave the dressers, teddy bears no longer on the bed, the house felt empty the more I packed. The night before they left, we had pizza and ice cream and squeezed in as many fun memories as we could. I soaked in every moment. The next morning, I was loading the car up with all their things when my phone rang again. It was the agency so of course, I thought they were calling to check in with everyone. Instead, they said, ‘I know you’re in the process of saying goodbye but we have a newborn baby girl about to be released from the hospital. Can you guys take her?’ My husband had pulled in the driveway while I was hanging up the phone with the caseworker. He was just getting in from his night at work so I walked outside and told him about the call and the baby girl’s story. We decided right there, we wanted to say yes.

It was an emotional roller coaster that day. We said goodbye and watched them pull away, then we took our older two out for dinner to try and lift everyone’s spirits. During all of this, I was also taking calls and answering emails about our new baby, when she would be discharged, what we would need, etc. 2 weeks later, she finally came home.

It was so much fun having a baby in the house again. The older two kids loved her to pieces. She was a daddy’s girl. Everywhere my husband went, she was right there. 8 months later, her case was still going on when another phone call came. Our first foster placement was back in care. Would we take them? ‘Yes!’ The next year and a half was a crazy ride. Court dates and visitations and the growing bond with these kids. One of the children from our first foster placement was reunited with a family member during that time. We missed her so much but we’re happy to see her make it home. Reunification is a beautiful thing.

For the other two children, the days kept moving on and after many court dates and sleepless nights where I laid awake terrified my babies would one day be taken from us, we got some good news. Our little boy was the first one we got the news about. ‘His case is moved to adoption. Would you be willing to adopt him?’ Of course, we said yes!

Now, all we needed was to hear our little girl could stay too. The tiny baby we had brought home from the hospital was now close to 2 years old. Then one day while standing in the courtroom, I got to hear the judge say it was all over. We could adopt her! I don’t think I even realized how scared I truly was standing there that day. But the moment they said she was going to be ours forever, it felt like a heavy weight was removed from me. All the fears that kept me up at night were finally gone.

A few months and a ton of paperwork later the day was here! June 12, 2019, we finally became a forever family! It was worth every fear, every sleepless night, every tear. Our babies were forever ours.

We are still licensed foster parents and have fostered several children since Hallie and Jayden’s adoption. We have had to say many goodbyes and will never forget those children. Every one of them will forever have a place in our hearts. I hope if they stayed for just a few weeks or if they stayed for months, they felt love here and know we continue to pray for them every day.

We are also excited to announce we are in the process of adopting our current foster daughter who happens to be our little girl’s sister! We are so thankful to God for bringing us all together. He has always known who was meant to stay and who was meant to be here for a short time.

So many times, I look at my family and think of all I would be missing if we hadn’t been willing to risk having our hearts broke. It terrifies me to think of where they would be if we had not said yes. There are so many kids out there that just need someone willing to love them. You don’t need to have some sort of super-human strength. You just need love and a willingness to share it.”

This story was submitted to Love What Matters by Rachel from West Virginia. You can follow their journey on Instagram. Do you have a similar experience? We’d like to hear your important journey. Submit your own story here. Be sure to subscribe to our free email newsletter for our best stories, and YouTube for our best videos.

‘Stay with me!’ My body was septic. I’d never carry our child. ‘There’s a baby at the hospital. Do you want him?’: After losses, couple foster to adopt, ‘He’s the redemption to our pain’