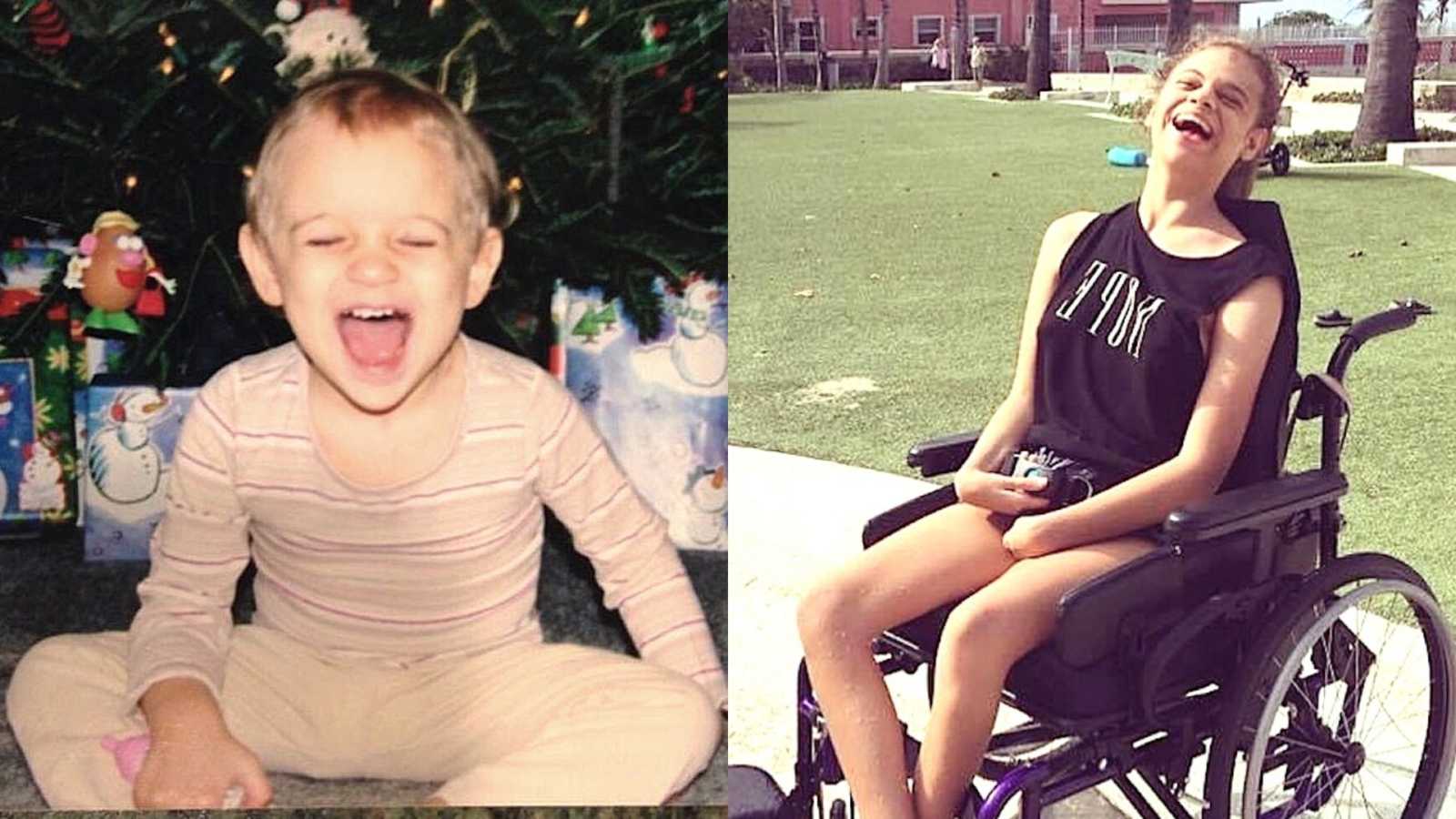 “Melissa was born on September 1, 2000. It was a scheduled c-section, there were no complications and everything went as planned. We came home and happily started our life as a family of four.

As the weeks passed, I felt something wasn’t ‘quite right’ with Melissa. She didn’t smile very easily, she never slept, she cried all the time and she avoided eye contact during feedings. I pushed it all aside and assumed I was over thinking all of the signs. Our older daughter was 9, it had been some time since I had a newborn in the house.

Melissa’s 6 month check up with her pediatrician confirmed all of our concerns. Melissa’s head circumference was not growing within the normal range for her age and she was not meeting all of the milestones of a six month old. We left that appointment feeling uncertain, but hopeful. We were referred to a geneticist to rule out any underlying conditions.

After multiple tests were completed, we entered the geneticist’s office not sure what to expect. As he began explaining all of the results… TIME STOOD STILL… Melissa was diagnosed with a very rare chromosome translocation and Microcephaly (small head), meaning her brain had not developed properly and had stopped growing after birth. This can cause intellectual disability, speech delay, seizures and abnormal muscle functionality. The only words I remember from that day are, ‘When she gets to school age, put her with ‘normal’ children.’ So my thoughts were, she will live to school age, but she won’t be ‘normal.’

We drove home in silence trying to process everything that had just happened. The first thing I did when I walked in the door was turn on my desktop (this was way before iPhones!) and looked up Microcephaly. The first sentence said, life expectancy low. I turned off my computer and I cried. I cried for days.

The days, weeks and months passed. Filled with therapies, specialist appointments and hospital visits. And we found our new normal.  Melissa was making some progress… it was slow, but it was progress! Then, at the age of six, Melissa started having GrandMal seizures. We were referred to a well known neurologist in our area. After addressing our concerns and the best treatment options, we asked him what Melissa’s future looked like. His response was, ‘If you buy a toaster and it’s smashed, you know when you plug it in that it isn’t going to work right.’  We left his office speechless and broken. And then we found a new neurologist!

Melissa was diagnosed with epilepsy and suffered for years with many seizures that unfortunately affected some of the progress that she had made over the years. But, we continued on… and we found our new normal.

The time was approaching for Melissa to start school. We had so many concerns with this decision (We didn’t put her with ‘normal’ children like our geneticist had suggested), we found a public school which could meet her needs in a class for children with special needs. I never loved the experience, but knew that she needed to have the opportunity to become everything she could be. Her first year was good enough, her second year however, is something we will not soon forget! I received a phone call from the principal one day and heard these words , ‘Melissa is fine, but we have two volunteers who witnessed a little girl in a purple wheelchair being shaken and yelled at.’ That little girl was Melissa. Our nonverbal daughter in her little purple wheelchair who could not defend herself! She did not return to public school.

I do not believe that everything happens for a reason, but I do believe sometimes life leads you in the right direction at the right time. Shortly after this incident at school, I received a phone call from a special needs mom that I had met at therapy. She was opening a non profit school for children with special needs and wanted Melissa to be her first student. Our lives changed that day!

Fast forward to today. Melissa is 20 years old. She rocks her days in her purple wheelchair and is non verbal. She loves listening to music and watching YouTube videos. She is still attending the same nonprofit school and they have become our second family. She still receives weekly therapies with the most dedicated therapists. She has made amazing progress from when we first heard her diagnosis. We have had many changes and challenges with Melissa over the years, but we have learned that no matter how hard it gets, we will always find our new normal.”

This story was submitted to Love What Matters by Dina Montgomery. You can follow her journey on Instagram. Submit your own story here, and be sure to subscribe to our free email newsletter for our best stories, and YouTube for our best videos.

‘You need to decide if you want to go through with it.’ To her, I was carrying a diagnosis, not a baby.’: Mom to son with Spina Bifida says ‘a life with a disability doesn’t mean a lifetime of sadness’

‘She wasn’t getting enough air. She was almost gasping and was quite purple. It was pure torture.’: Woman gives birth to baby girl with Treacher Collins Syndrome, ‘Her disability won’t hold her down’

‘Are you prepared to take care of someone with an EXTREME disability?,’ she asked while practically rolling her eyes. It wasn’t a question. It was more of an accusation.’