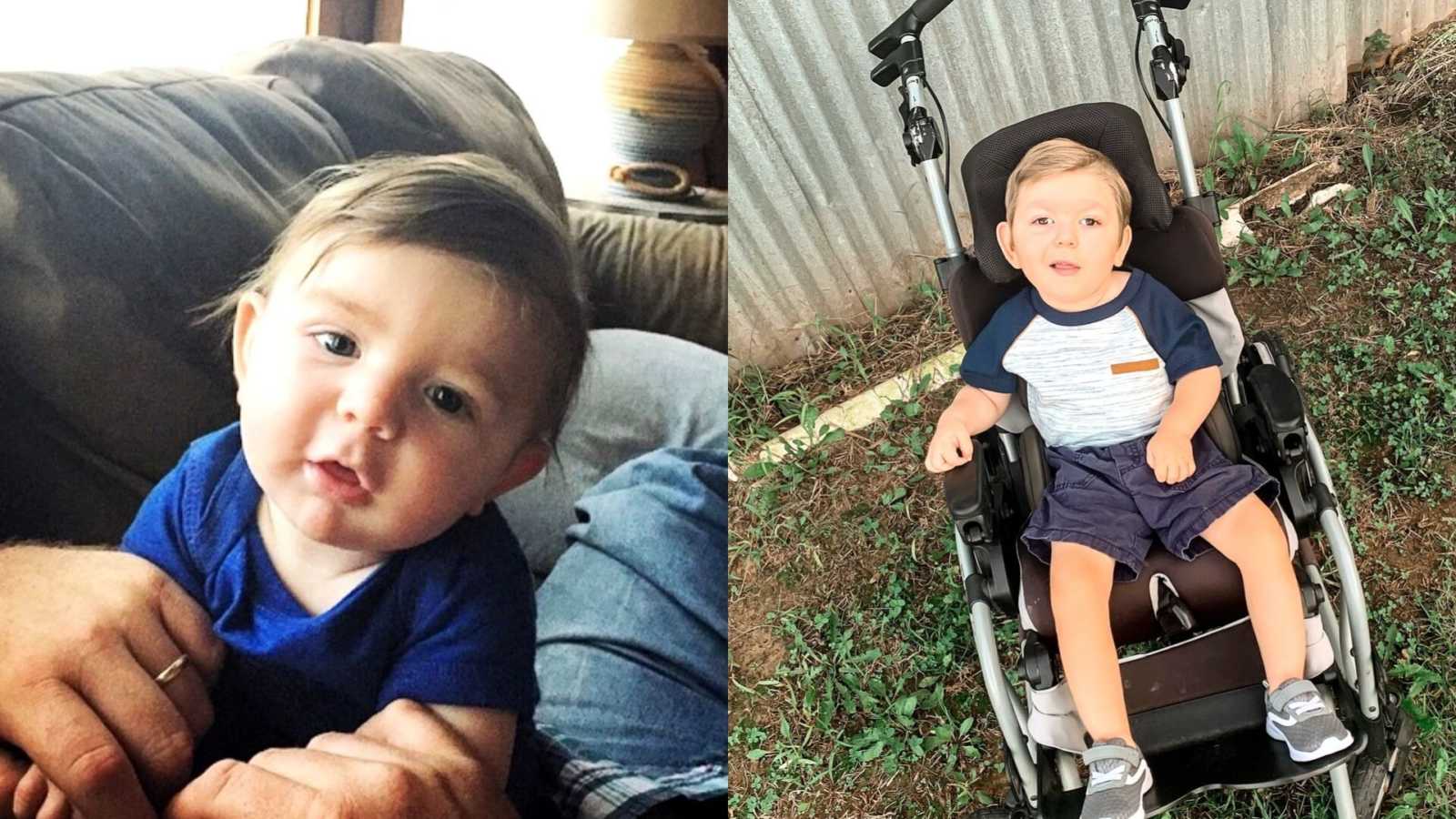 “Before our son was born my husband and I knew exactly what we wanted to name him. However, we had no idea how much this little baby of ours would need the bravery and strength behind this name. We named him Leo.

After a very normal and almost boring pregnancy, Leo came into the world 3 weeks early. On February 22, 2016, our perfect little boy was born. After such an uneventful pregnancy things only progressively got more difficult. At first Leo seemed to be very healthy. He was breathing well and his heart beat healthily. Quickly things began to change. Leo was having trouble eating and maintaining a healthy temperature but the doctors insisted it must be due to his early arrival. ‘You must have had your dates wrong and he wasn’t quite to 37 weeks yet,’ they said to us as we brought up concerns. But both my husband and I had a horrible feeling that something wasn’t right. I knew I had my gestation dates correct. We knew something else was wrong.

When Leo was 24 hours old we began to notice he had an odd tremor. The doctors insisted that we were just nervous new parents and a few days later we were discharged. We still felt in our hearts that something was wrong with our newborn son. As we packed up to leave the hospital one of the nurses came into the room and said to me, ‘If you guys were my kids, I would tell you to go straight to the children’s hospital. Something is wrong with your baby.’

We did just that. This is when our entire lives would change. As we checked into the ER at the OU Children’s Hospital, Leo’s temperature drastically changed by several degrees in a matter of just minutes from 98.6 to 102 degrees. The nurses were very confused and immediately admitted us to be seen. The next few weeks are a blur of tests and questions, all ending in more questions than answers. The doctors would have me go over the pregnancy a thousand times. Was I ever sick? No. Was I sure I had my dates right? Yes.

Finally, the medical team decided to do an MRI to take a look at our newborn baby’s brain. I remember this day better than the day I gave birth. Every detail of that memory seems to be imprinted inside my brain forever. After the MRI results were ready the medical team came into our room. Being a teaching hospital, there were always a few students with each attending physician, but this time our room was filled. The attending sat us down and pulled a chair up in front of us. I remember realizing she was not much older than I was and was several months pregnant. She began to cry. I am sure it was the opposite of what she was supposed to do but it was exactly what was needed. She was crying for us and with us. She told us the MRI showed a significant brain bleed as well as decreased white matter. ‘This could be nothing still,’ she told us, trying to give us hope. But everyone in that room knew it wasn’t true. We all knew it meant something.

In all the time since I have never seen a doctor show such emotion. The following months were spent with various specialists, sleepless nights while Googling symptoms, and trying to comfort a very fussy baby. Leo never slept and would cry a gut-wrenching cry if he was set down. He was in pain though we couldn’t figure out why. We were in and out of the hospital for months. He was diagnosed with GERD, diabetes insipidus, and failure to thrive. The doctors were running test after test trying to figure out what could be causing all of Leo’s issues.

When Leo was about 6 months old he stopped eating. He was already so underweight this meant immediate hospitalization. Nothing new. Sadly, we were used to it by this point. We were becoming numb to it all. After a swallow study was done they discovered that Leo had lost his ability to safely swallow. He was aspirating all liquids and purees, meaning all food and liquid was invading his lungs. A g-tube would be placed surgically so that Leo could get all of his nutrition directly into his stomach. It was during this hospital stay that the doctors suggested a whole genome sequencing where they would look at all of Leo’s genes, and ours as the parents, to see if they could find a diagnosis. The genetic specialist told us, ‘There is only about a 60% chance that we will have a diagnosis at the end so don’t get your hopes up.’ It was still worth a shot. The test would take 4 months to get results back.

After months of torturous waiting we got the phone call. I immediately recognized the number of the geneticist’s office and answered. The receptionist set up an appointment for us to come in the next day. When we went in to the hospital they sat us in a small room with a couch and a couple of chairs. The geneticists came in and sat down and immediately said, ‘We got the results back and we did find something. Your son has a genetic disorder called Aicardi-Goutieres Syndrome. It is extremely rare with only 400 reported cases world-wide. The life expectancy is 1 year for early onset which is what Leo has. Your child will not live longer than 10 years old at most.’

At this point most parents would be hysterically crying. I just laughed. It was absurd. I couldn’t believe it and would not accept it. They were sitting there calmly telling us that our child would be severely disabled and die and I felt like I was going to wake up from a bad dream at any minute. So, I laughed. It was like laughing at a funeral. I am pretty sure that they thought I had lost my mind and maybe I had. As soon as we got to the car to leave, I did lose it. How can this happen to us? We were just normal people. Why us?

They say special kids are given to special people, but that is just not true. Special kids are given to average and very normal people like us. We had no idea that our lives were about to change when our son was born. We had no idea of the strength and courage we would need. We had no idea of the things he would teach us and those around him. Today Leo is almost 4 years old. He has proven many doctors wrong and is living a very full and happy life. While he may not be able to sit up on his own or walk, he is living his life to the fullest. Very early on we agreed that we would value Leo’s quality of life over quantity of life, meaning that we were not going to shelter him and keep him away from things out of fear of illness or injury. We wanted to give him the most amazing life possible, full of the same opportunities as other children.

Leo loves to travel and spend time outdoors. He helps with chores at the house such as feeding the horses. We include him in everything we can. He loves to go to the pool and  spend time outside. We love taking him to Disney World every year and he is such a good traveler. His favorite ride is the spinning teacups! I cherish his laughs because I never knew if he ever would. But nowadays he laughs all the time, especially when we jump and bounce around with him. I hope that he is able to live a full and happy life, even if it is short. I want his life to be filled with joy and love. Life with Leo has taught us so many things, but most importantly it has taught us to never give up and never give in.”

This story was submitted to Love What Matters by Lauren Lowery. You can follow her on Instagram. Submit your own story here and be sure to subscribe to our free email newsletter for our best stories.

‘He was born without an esophagus, and couldn’t eat. To be honest, we were scared of hurting him.’ Couple’s adoption of 2-year-old with special needs they ‘never doubted’ was ‘their son’ 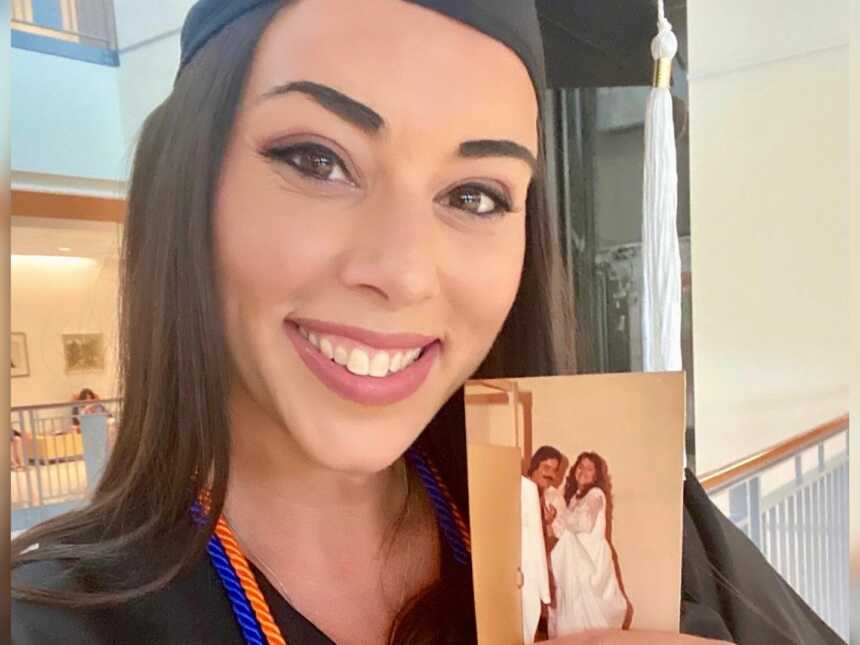 ‘I had to stare directly in the eye of what I lost.’: Woman shares candid reality of grief

“I grieved at 36 years old for something that happened over half my life ago, and it was the best gift that I could give myself.”