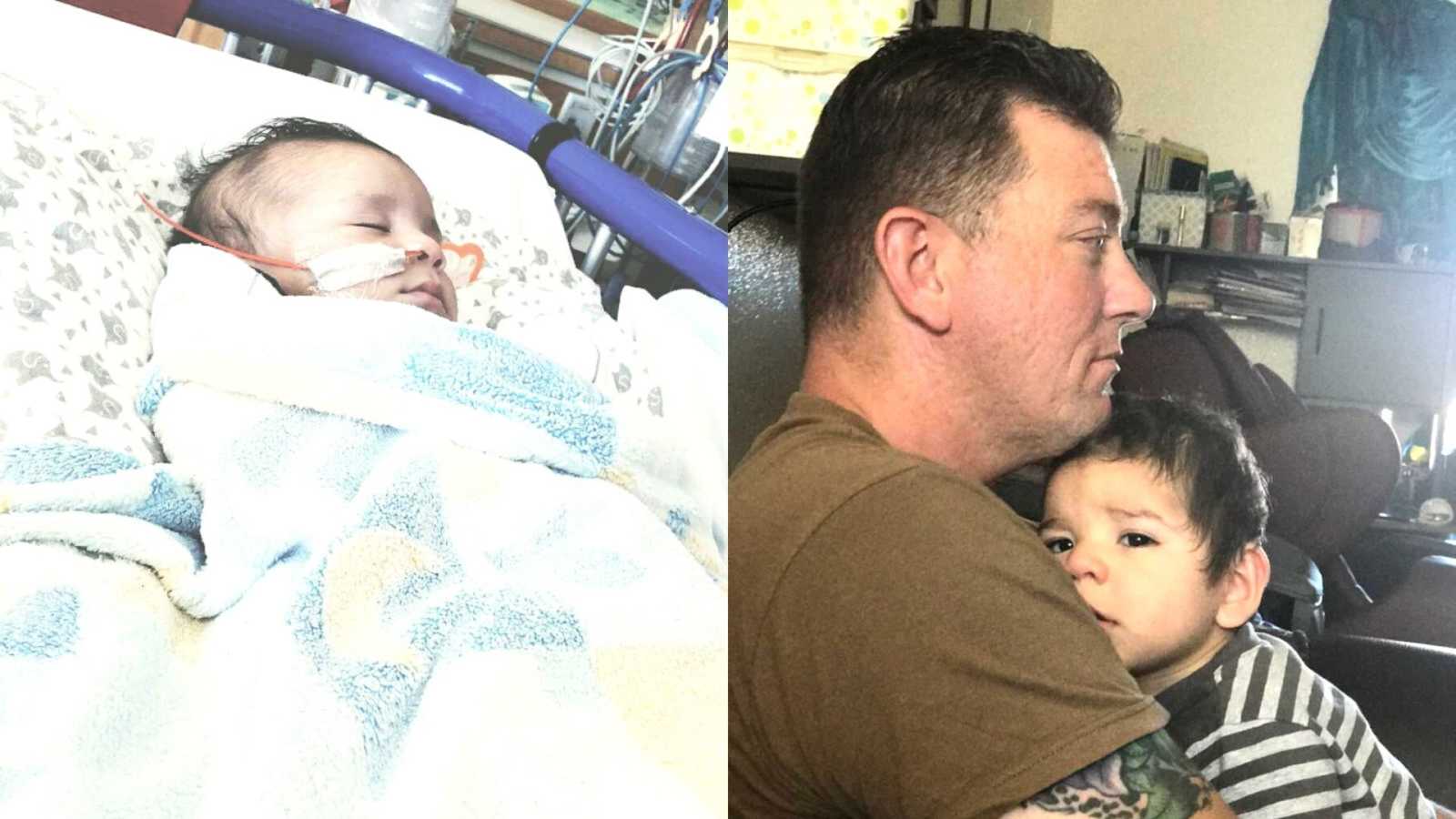 “In 2016, the agency received a referral for child abuse to a 2-month-old baby that had been nearly fatally assaulted by his father. He was being transported to children’s hospital PICU when we got the call. An MRI and a CT scan were done, as well as a skeletal survey. The results of the test showed a subdural hemorrhage in the head, bilateral retinal hemorrhages and a fracture of the left tibia. None of the abusers had an explanation for it. In the days following, we were preparing for him to pass away. Paperwork was completed for his organs to be donated. But then, something happened. After they removed him from life support, he continued to breathe and fight on his own. At this point, baby came into protective custody, and since then, we have been by his side, loving him and praying to our Heavenly Father to guide us and to protect him.

Our story begins when we decided to adopt from the foster care system. My husband was active duty military at the time and I was a stay home mom with 2 biological kids, and we had lots of love to give. We knew that was our calling. We got a call from the child welfare services placement department one day. We answered, as we always did, with excitement. Only this time the excitement turned into worry and many unknown feelings. On August 17, 2016, the agency received a referral for child abuse to a 2-month-old baby that had been brutally attacked by his biological dad.

He suffered from a non-accidental traumatic brain injury. He was brutally attacked to the point he lost consciousness and had a stroke. We sat next to him and prayed for him. All we could hear was a shallow cry, almost like a scream of pain from his tiny mouth. There were so many nurses and specialists coming in and out of the room looking at us with sadness in their eyes. We couldn’t believe it. I cried and cried and begged to God, ‘Please let him live. Give us the wisdom to understand what happened to him.’

Doctors kept looking at us and telling us what their next steps were, but all I wanted to know was who and why? It was all still being investigated. As the days went on, we decided to split shifts at the hospital. I went during the day and my husband took the night shift. We’d hold him and massage his hands and talk to him.

‘You are so strong, little man. We love you so much,’ we told him, never leaving his side.

Finally after several weeks, we took him home, still as a medically fragile foster child. There was medicine and feeding schedules and multiple doctors appointments every week. Every doctor was very worried that his brain was not healing and that he may have more seizures and complications. All of our family embraced him and loved him right away. He was so medicated still that he slept most of the time.

His brain was trying to heal from such a horrible injury. The investigation put one of the biological parents in jail, yet the other one was still free with no consequences. Every time we had court, we were there representing the child that now was blind, had cerebral palsy and was incredibly fragile. Every time I looked at the people who did this to him, all I can think of was the pain my baby went through, how they took everything from him. His sight, his voice, who he was. And yet, they were there as if nothing had happened.

Months went by and our little boy continued to make progress. He was more awake and the bleeding of his eyes had stop. He started to move his left hand and was kicking his left leg. Due to the stroke, he is hemiplegic. Lots of therapy happened in the course of a year and lots of love of course. Our life revolves around him. We did everything the doctors told us to do, we look him for the best therapist and got ourselves involved in every activity that was beneficial for him.

Finally the day came, termination of rights for parents – something we thought would never happen. We were officially his adoptive parents. That day, he became our son forever. I was so happy and I know my husband, family and friends were too. It was a moment of rejoice. He is now ours forever, for all eternity. However this bittersweet day, we also learned just exactly why our son was so fragile.

They suffocated him, they threw him by his feet on the ground several times, and they admitted to feeling some sort of ‘reward’ at watching him lay lifeless. These people are monsters and ruined a baby’s life forever. I was scared to see this person being sentenced. I don’t know why, the court room felt big and cold. For the longest time, the investigators and lawyers said he ‘might get 6 years as max sentence of child abuse,’ since there’s no official sentence for shaken baby syndrome. I was devastated to know that the law is not very specific on what child abuse is. But then, it happened.

‘25 years with no parole,’ the judge declared.

He was being charged per injury. I said a prayer, thanking God that justice was being served somehow on earth, even though they give my son a life sentence of suffering. The other parent never got charged and is living life with no remorse, I suppose.

Now our little boy is thriving and making our hearts happy, giving us the example of strength and hope. He has global brain damage and doctors are always so amazed of everything he can do despite all his disabilities. He is truly a warrior. He is funny, he likes Finding Dory and LOVES Blake Shelton. When he’s not feeling good we put his favorites songs from Blake on and it makes him feel better. He even smiles!

He is a true testament that love conquers all. He’s a miracle. He has gone through a long road of suffering but has thrived amidst everything. Our love for him is unmeasurable. It’s an honor to be his parents, it’s an honor to be a part of his journey and we work hard to make his life as happy and comfortable as possible. He deserves all the love in the world! And even though he will have a lifelong marked with disabilities, he is doing great, and we cling to the hope registered in Isaiah 35:5-6 where it says God will heal the sick. He is our son for all eternity, nothing can change that.

Why do we share his story? Because it might save another baby’s life. It might encourage others to adopt medically fragile kids and it might give my son and other kids and parents going through similar struggles a voice. Please never shake a baby. If you ever have any thought of hurting anyone, seek help. There are so many ways to prevent this. Talk to a friend or family member, there’s always another way.”

This story was submitted to Love What Matters by Cecilia Hansen. You can follow her journey on Instagram. Do you have a similar experience? We’d like to hear your important journey. Submit your own story here. Be sure to subscribe to our free email newsletter for our best stories, and YouTube for our best videos.

‘It was at the hands of his babysitter, who was a family friend. Yes, we knew her.’: Mom ‘petrified’ after learning babysitter abused infant son, insists her shaken baby survivor will still ‘have the absolute best life’

‘He asked me if he could murder the baby now. His father had been alone with him for 2 hours and everything had been fine.’