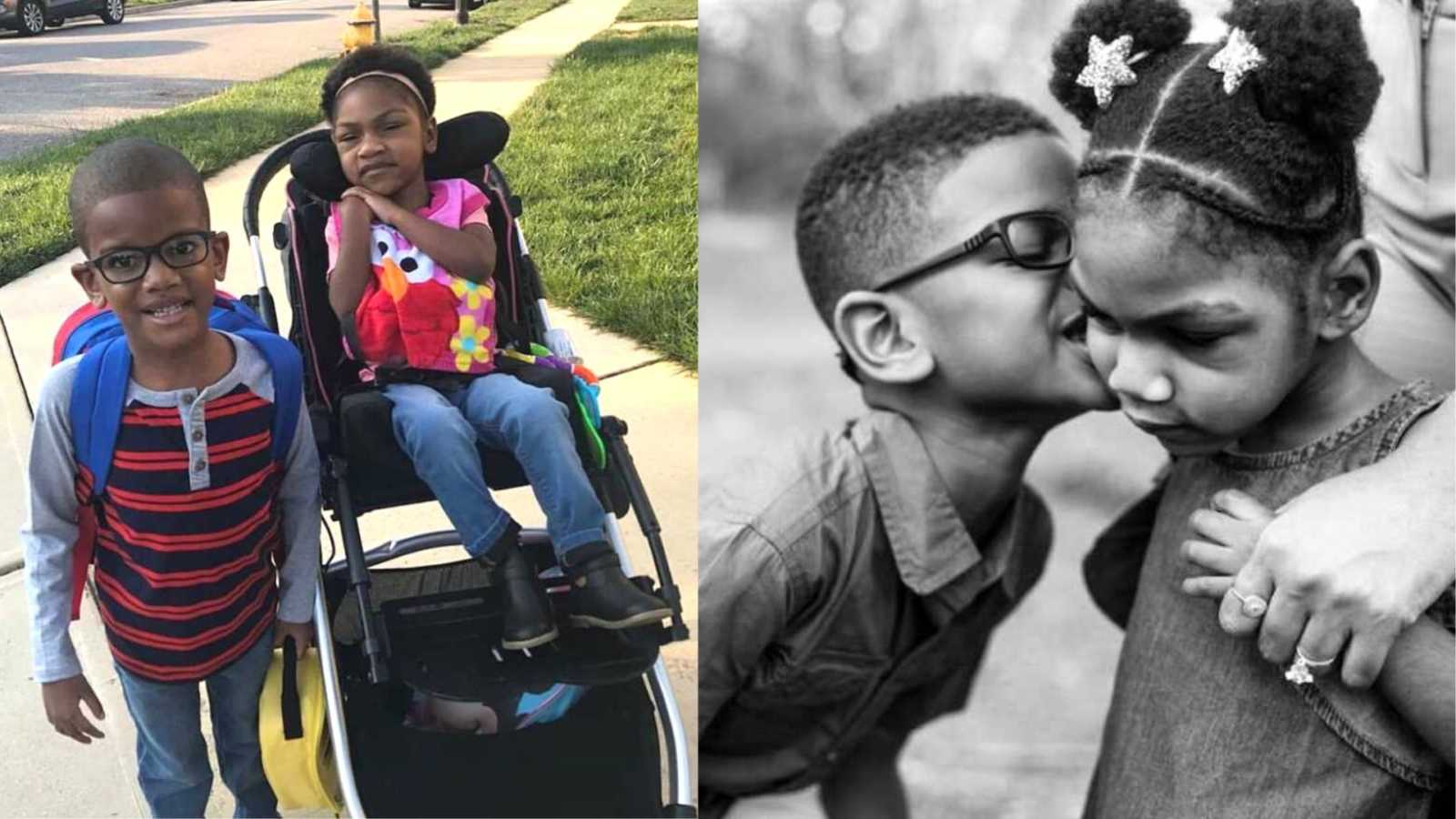 “On June 4, 2011, walking down the aisle on my wedding day, I felt as though I was getting ready to walk into the perfect life. We had our reception and went off to our honeymoon shortly after. The ‘perfect’ life which was forming took off to a great start. We got pregnant with twins, but shortly after, the twists and turns I wasn’t prepared for, happened.

During my pregnancy, I found out Twin B (who would later be named Genell) was growing about 3 weeks behind Twin A (Julius). My OBGYN kept a close eye on it, and at the time it seemed a blessing in disguise because I got to have ultrasounds twice a month. During the second trimester, the growth pattern didn’t change for the better. Genell was still behind and Julius was right on track. Prior to this, I was asked if I wanted an amniocentesis, but after getting an understanding of the risks, I declined the procedure. What happened next would change my life forever.

I went to my 34-week checkup and ended up being admitted. The doctors decided I needed to have a c-section because Genell’s heart rate started to drop. The on-call doctor made this choice because unfortunately, my OBGYN was in California attending his father’s funeral. She didn’t know much about my situation, but I tried to stay as calm as possible given the circumstances. That evening, I was taken back to the operating room for my c-section. As a first-time mom, I always envisioned those amazing hospital pictures when you’re holding your child, skin to skin. Well, my vision turned into a nightmare, and quickly. From afar, the doctors held up Julius and Genell for me to see, and immediately took them both back to the NICU. Not until a couple of hours later would I have the opportunity to see and touch my newborns for the first time. Unfortunately, I was not able to hold either one of them because I was being pushed around on a gurney and both were connected to lots of tubes to keep them stable.

December 21, on their one-week birthday, I received a call in my hospital room from the NICU that Genell needed to be sent to a Level 3 hospital. She had a disease called Necrotizing Enterocolitis (NEC), which basically meant anything she digested was deteriorating her intestines. The Level 3 hospital was an hour away, but Julius would not be going, so I had to figure out a way to split my time with two NICU babies in two different hospitals.

Genell spent her first Christmas in the NICU, while Julius stayed home with us. I felt so guilty because I could not accommodate both of my children. After spending 2 months in the NICU, Genell had her final blood transfusion, and she was home a few days later! Finally, both of them were united, but life as a first-time mom was scary. Genell suffered from Apnea (temporary cessation of breathing) and Bradycardia (a slow heart rate), and there were several times when her heart rate would get so low we had to stimulate her with a prick on the foot to get her conscious again. Mind you, aside from the 30-minute ‘NICU discharge’ video I watched, I had no idea what I was in for.

Shortly after the twins turned 4 months, I started to notice Genell wasn’t progressing as much as her brother. Her pediatrician did not have much advice aside from ‘just continue to monitor her.’ The twins turned 6 months, and I still noticed a difference in their development. Genell seemed to be stuck in a 2-3 month range, while Julius was progressing normally. I took her to get an MRI, but to no avail, because everything looked fine. She had a few more tests, but everything came back normal.

At their 9-month checkup, her pediatrician suggested we see a geneticist. We did just that and a few weeks later, I received what I considered to be devastating news. I got a call from the University of Florida genetics department and they told me, ‘A portion of Genell’s chromosome is missing.’ The name of this was, well, it’s honestly, nameless. There was no common name for it because it was so rare. Medically, the condition is considered a ‘Pathogenic Terminal Deletion on Chromosome 7.’ The weeks, months, and years to follow would change our lives forever. I felt nervous, scared, confused, worried, and alone.

I learned quickly that I would not be able to have typical ‘mom’ conversations with other new moms. I realized most things parents took for granted were not part of my journey. Starting at age 1, I learned how important therapy would be. We spent countless hours both in the facility and at home trying to work on what some would consider ‘an easy task,’ like learning how to roll over, holding a bottle, and playing with toys. Hearing the pain in Genell’s cry during physical therapy was the most heart-wrenching feeling. I knew it was all for good, but I felt helpless. ‘Do I stop the therapist and interrupt Genell’s progress, or do I just endure the crying and cry myself?’ Those were some of the many questions which ran through my head daily.

About a year after finding out about Genell’s diagnosis, I noticed some of Julius’s mannerisms seemed a bit off. Rather than ignoring them, or considering them a phase, I took him in to be evaluated by a child psychiatrist. A few weeks later, we received the results in the mail, and I went from raising one special needs child to two. ‘Julius had the diagnosis of autism.’

A few years later, I found myself divorced and navigating through this journey as a single mom. In the midst of doing my research and landing on various support pages, I started to lean on social media to share more about my journey. I’d snap pictures here and there of us at different appointments. I’d update friends on my status about a new discovery or accomplishment the kids had made. Some comments were inquisitive (which didn’t bother me, it showed me that people cared), while other comments were mainly encouragement.

Sharing my journey helped me find other families that were going through what I was going through. People I knew started to message me and tell me their parenting stories. I even reunited with childhood friends I grew up with who were living the same life that I was. I started to feel like I wasn’t alone!

Julius and Genell have taught me so much! Not just about their condition, but also about myself. I’ve learned how unhelpful the insurance world can be when raising a child with a medical condition, so, in 2019, I founded a nonprofit organization, Here For A Reason, Inc., where we provide financial assistance to other special needs families.

I never imagined my journey as a mom would look this way. Sometimes we don’t realize how much good can come from what seems like bad situation. Rather than focusing on the negative, accept the cards you have been dealt. Of course, do your due diligence to research and don’t be afraid to ask questions. No matter how you may be feeling, try to be the best advocate for yourself and the ones that you are caring for.”

This story was submitted to Love What Matters by Melanie Oates from Waldorf, MD. You can follow their journey on Instagram and their website. Do you have a similar experience? We’d like to hear your important journey. Submit your own story here. Be sure to subscribe to our free email newsletter for our best stories, and YouTube for our best videos.

‘A teacher called our daughter ‘lazy,’ put her outside, and forgot about her. We found her in full-blown panic.’: Mom creates ‘disability buttons’ for daughter with special needs, in tears after people ‘finally talk to her’