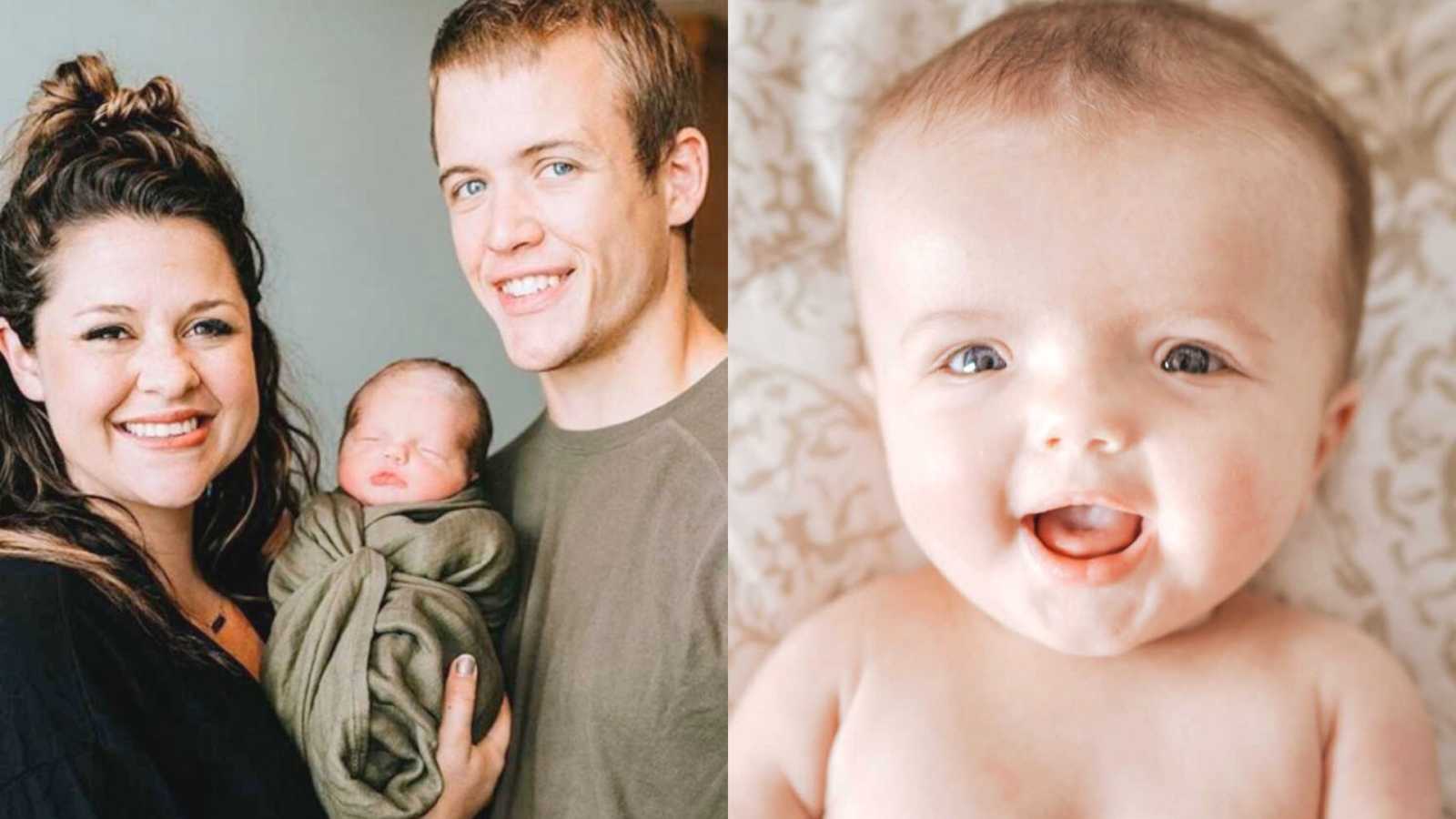 “I was standing in a single-stall gas station bathroom when I learned my life would never be the same. In that moment, I knew from this point on, there would be a clear line in my life — a before and after.

I’d just gotten off a plane from vacation in Florida, where my boyfriend had proposed and I’d said yes. And now, 36 hours after the proposal, I held a positive pregnancy test, void of any emotion but shock.

This wasn’t how it was supposed to happen. I was always a planner, kids had been in our ‘someday’ future. It certainly wasn’t now, not when we had an engagement to celebrate and a wedding to plan.

But this was happening. We were going to be parents.

Over the next 9 months, I got ahold of myself and shock began to shift into excitement. We found out we were having a boy. We decorated the nursery. We had the showers. We did all the things you do when you’re planning for a baby.

Over the course of those 9 months, it never once occurred to us there could be something wrong.

A few weeks after Cooper made his entrance into the world, we found out our perfect little baby was profoundly deaf as a result of a syndrome we’d never even heard of.

Six weeks earlier, the day before we left the hospital after having Cooper, a nurse had casually mentioned, ‘Cooper hasn’t passed his mandatory newborn screening.’ There was no concern in her voice, and it comforted me. These things happened. It was probably fluid in the ears. We were told, ‘Bring him back in a few weeks to retest.’

We took our beautiful baby home and adjusted to life as new parents. I didn’t notice Cooper reacting to any loud sounds, but I also knew newborns were heavy sleepers.

In the meantime, I took to Facebook to do a little research. When Cooper was born, he had a huge patch of white hair mixed in with his otherwise dark hair. My whole pregnancy, I’d been asking Brandon, ‘Do you think he’ll be born with my dark hair or your lighter hair?’ When he came out with both, we joked, ‘He couldn’t choose.’ We were told some kids are born that way and it goes away, while for others, it stays. We didn’t think much of it.

But the white just kept getting more prominent and when Cooper was three weeks old, I posted in one of my mom groups on Facebook asking whether anyone else’s littles had patches of hair like this. I was just curious, honestly. Some babies had tiny spots, mostly in the back of their hair, while Cooper’s was front and center. But there was one comment from a woman named Summer which stood out:

‘The white/blonde spot can be a sign of Waardenburg syndrome,’ she wrote. ‘I follow a YouTuber who has it and they say Mila Kunis has it as well. They tend to have the most beautiful eyes. You should look it up and see if he has any of the other characteristics.’

Waardenburg Syndrome. I had never heard of it. And yes, out of curiosity, not concern, I Googled it. When I started reading, my world stopped. It was like I was reading through a checklist describing my perfect baby boy. The part which concerned me the most though was the hearing. Hearing issues go hand-in-hand with Waardenburg Syndrome, and Cooper had failed his test twice. I threw my phone at my husband and told him to read what I had read. Worry kicked in for him at that point as well.

The next few days, reading about Waardenburg consumed me. I wanted to know as much as I could about what we were potentially dealing with. In short, Waardenburg Syndrome is a genetic mutation which can impact hearing, as well as pigmentation (in the hair, skin, eyes, etc.). There are four types, each having slightly differing manifestations. Typically it runs in families, but not always. In our case, it doesn’t.

Because of my suspicion after researching, I called and got Cooper in for a hearing retest the next day. I had planned to wait a few weeks before retesting him as no one seemed overly concerned. But because of his alignments with Waardenburg, I wanted to know sooner.

Cooper didn’t pass the next screening either. At that point, a good friend recommended seeing a doctor her family sees who had dealt with genetic concerns of theirs. We got in quickly, and he made me feel validated in my concern. He saw what I saw and agreed, ‘Waardenburg Syndrome is the likely cause,’ then put in a referral for additional hearing testing at Children’s Hospital, which Cooper also failed.

On October 18, 2019, we received the official diagnosis of profound hearing loss. But I already knew. I’d known since reading the first article. I’d known since I first saw photos of Waardenburg’s telltale white forelock and eye shape, since our dogs barked inches from Cooper’s ear and he didn’t flinch, since I’d ‘tested’ his hearing myself by blasting music near his ear.

I’d known the whole time what the final test would tell us, that Waardenburg is our ‘why.’

At first, knowing terrified me. I didn’t understand how Brandon and I had come together and created a ‘gene mutation,’ something which sounded so cold and clinical. It made me angry, to be honest. As superficial as it sounds, I worried my son would look funny, that Waardenburg features would be glaringly obvious.

Maybe to others, they are. I don’t see it when I look at him. Instead, I see the fullest, most perfect little lips. I see the deepest, bluest eyes. I see hair which makes him unique. I see gummy smiles. Despite all the worry which consumed me at first, now I just see my baby. My perfect, perfect baby.

The journey to here and now hasn’t been an easy one. When Cooper was diagnosed as deaf, I was pissed. I refused to even say the word for a few weeks. I hated it, as if hating a word had any effect on what we were going through. I was angry he was deaf, yes, but it was more than that.

Honestly, I was so angry we hadn’t gotten the child we’d planned for. I can admit it now, knowing it’s a fairly normal way to feel after an unexpected diagnosis. But at the time, acknowledging I felt that way made me feel guilty, as if I was saying Cooper wasn’t the baby I wanted. But it wasn’t the case at all. Those first few weeks, I loved him so much, but I also spent time mourning what I thought parenthood would look like. It’s a difficult series of emotions to explain, and one which probably only other special needs parents truly understand.

When you have a baby, you have this vision for their life, as well as yours. For me, the vision was filled with Coop speaking his first words, reading him books, having conversations with him as he grew.

The vision didn’t include making sure he could see my mouth when I speak to him, learning sign language, driving to appointments weekly, learning about different brands of cochlear implants, picking out the colors for my baby’s hearing aids. Not of it is normal, happy parenthood.

Those first days, I spent plenty of time feeling sorry for Cooper, knowing he can’t hear the sounds of the world. But I also felt sorry for us, as first-time parents who weren’t even ready to be parents in the first place… and then this. Baptism by fire, I believe they call it.

Is it fair? No. Does it make any sense to me, even now? No. But do I still feel sorry for me, for Cooper, for Brandon? No. I don’t.

Because here’s the thing… the world of parenthood is beautiful in itself. But when you’re thrown into the world of special needs parenting, you learn quickly how much good there is in people. You see things, hear things, experience things in a new light, one which teaches you more than you ever imagined. You have a connection to these other parents, even if what their child is facing is different than what you may be facing. There’s still an invisible thread connecting you, an inaudible voice screaming, ‘I see you. I’m here with you. Your feelings are valid. You are never alone.’

And if I can ask for anything in life for Cooper, it’s he’s never, ever alone.”

This story was submitted to Love What Matters by Beth Leipholtz from Alexandria, MN. You can follow their journey on Instagram. Do you have a similar experience? We’d like to hear your important journey. Submit your own story here. Be sure to subscribe to our free email newsletter for our best stories, and YouTube for our best videos.

‘Put the device away!,’ a lady was yelling at me. ‘I’m deaf, this is a closed caption device for the movie.’: Woman diagnosed with ‘profound hearing loss,’ credits daughter for giving her ‘strength’

‘Your son is deaf.’ We were praying it was a huge mistake. They wheeled him out. I lost it.’: Mom shocked by newborn’s severe hearing loss, ‘we had no family history’

Do you know someone who could benefit from this? SHARE this story on Facebook wtih family and friends.