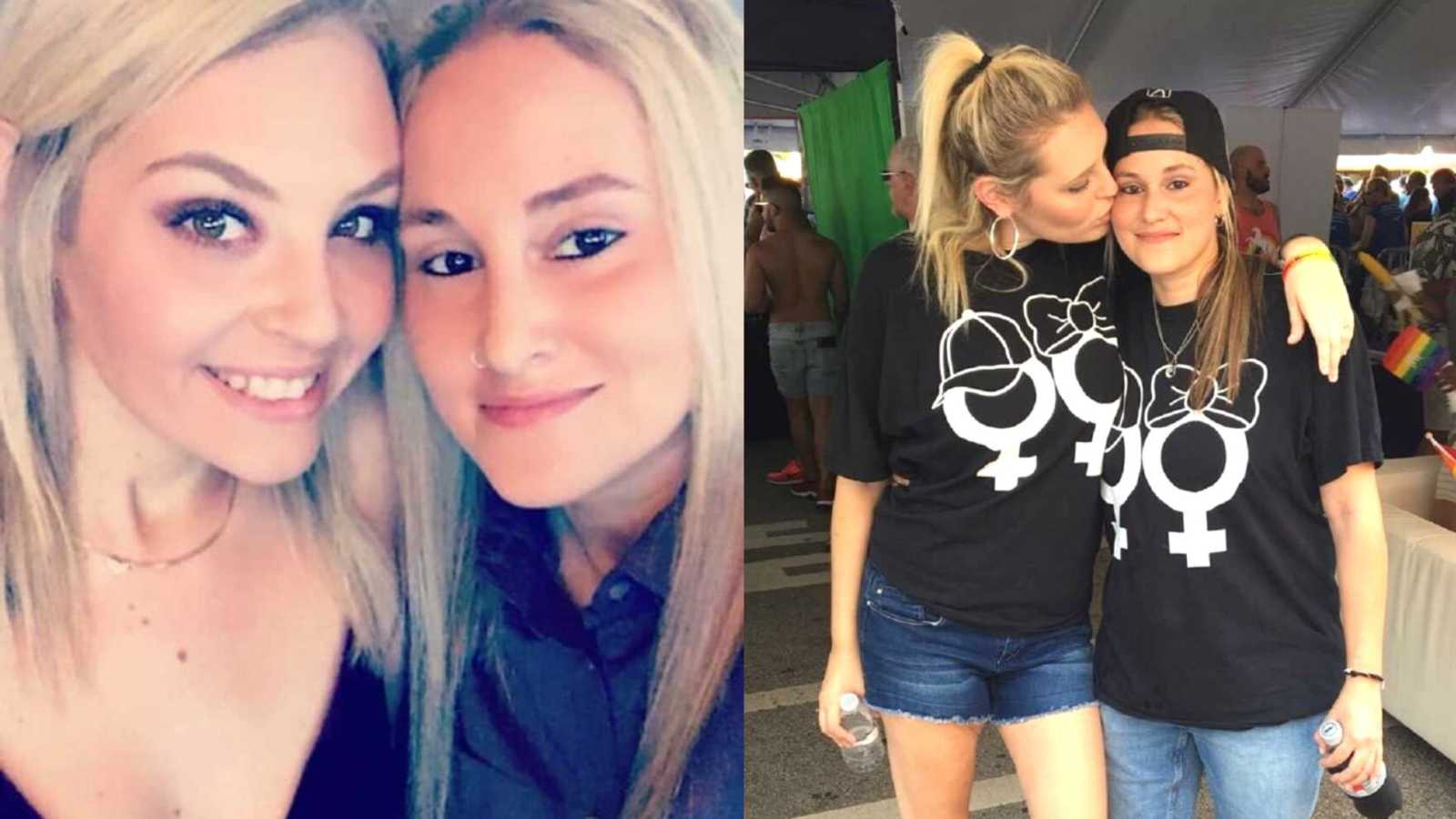 “‘You’re too beautiful to be gay,’ ‘where’s your man?’ ‘How can you have a family with her?’ ‘Why don’t you wear a dress?’ Those are only some of the questions my girlfriend and I are asked and statements we are given when approached about our relationship. Naively, I never realized the struggle this would be as a lesbian. I always heard horror stories about how gay men were treated and disrespected, but I never thought I would receive the same kind of disrespect. I am embarrassed to say, part of me thought I would be safe because I am a woman.

My name is Samantha Gorson, I am 27 years old from Fort Lauderdale, Florida. I have been with my girlfriend, Maleah Wood, 35, from Pennsville, New Jersey, for the majority of 2 years. Maleah and I met through social media, and I remember one of our first conversations, probably before we even met in person, ‘Does your mom know you’re gay?’ ‘What does your family think?’ My answers, fortunately, have always been, ‘she’s supportive, they are happy for me in whatever I choose to do.’ Maleah’s answers were not like mine at all. ‘Most of my family does not agree with my sexuality due to their religious beliefs so they keep their distance. I am grateful to have my mother and sister who support me.’ After hearing that, I wanted to keep Maleah safe and show her what it feels to be accepted and loved for being just who she is. Unfortunately, that is not always easy to do in this world, especially as a lesbian.

After dating for some time, I started to see the way people looked at us. I think it took me so long because I was in denial, or maybe egotistically I wanted to assume it was because we were a beautiful couple. Here are a few examples of what it has been like for us.

Maleah and I went to a night club on Fort Lauderdale beach with a couple of our friends, a man stopped me near the bathroom to hit on me. I very respectfully turned him down, explaining that I have a girlfriend. He brushed me off completely but went on his way. Later that night, Maleah and I were dancing together, and we shared a kiss. Almost immediately that same man came over to us and said, ‘You guys must be missing something. Don’t you need a man to finish the job?’ I was so disgusted and appalled, we left. In that moment, it dawned on me. We are not taken seriously at all; I had been approached by men prior to this and when I said, ‘I have a girlfriend,’ they would ALWAYS proceed to talk to me about my looks or ask to see a picture of her to ‘prove’ it. I now know after being in this exact same situation multiple times that Maleah and I (and lesbians in general) have been sexualized and not taken seriously for some time now.

A man messaged me through social media to tell me how beautiful I was and that he would like to take me out. I responded with, ‘I don’t think my girlfriend would like that very much.’ His response was, ‘I will take you both out and spoil you.’ I did not respond to that nonsense and later I posted something on my Instagram story about how cute gay people are (I always post LGBTQ friendly quotes and pictures), and he responded to the post by calling me a ‘faggot,’ and that I must be ‘retarded.’ I thought, ‘I wasn’t a faggot when you were trying to have a threesome with my girlfriend and I.’ It brings me to a place of anger. Maleah and I are not here for anyone’s entertainment, this man in particular was all about lesbians when he wanted to have Maleah and I at the same time, but the minute that he was challenged, he is calling us names and attempting to demean our character.

Recently, I was home alone while Maleah was asleep at her house. For whatever reason, 2 plumbers came over unannounced at 7:00 p.m. Looking back, I probably should have asked them to come back another day, but I trusted the situation and let them in. I had my phone in my hand, texting Maleah over and over hoping that she would wake up and come over because I felt so uncomfortable. They commented on the size of my apartment and the way I decorated, both of their voices seemed very deep and in control. One of the men walked to the truck to grab something. He said he would be ‘right back.’ I was now left alone with the other. I went to the kitchen and heard an extremely low, almost like a whisper, very different than the first time they were speaking to me, ‘Hey Miss Samantha.’ I said, ‘Yes?’ He said, ‘Where’s your husband?’ I said, ‘My girlfriend lives up the street, she should be here soon.’ He then proceeded to say, ‘Oh ok, so can I take you out sometime?’ I replied with annoyance, ‘I just said my girlfriend is coming any minute now,’ and with the exact same approach as the man from Instagram, ‘Well, I can take you both out.’ Thankfully, the other man came in and the 2 of them left right after that. I keep feeling as though our relationship is taken as a joke, we are being degraded and insulted because we are two women.

Why is this okay? Why does it make certain heterosexuals so uncomfortable to accept lesbian relationships as ‘real?’ Why have Maleah and I become so sexualized when we kiss in public? Does that make us a target for hate? It appears we are a threat to the masculinity of a hetero-male dominated world (or something). I cannot tell you how many times I have been asked, ‘So which one of you is the man in the relationship?’ Honestly, that statement is like nails on a chalkboard.

Maleah does not wear dresses, she does not wear heels, she loves to wear hats, and her pants aren’t tight and fitted to her body. She always wears a face full of makeup and takes great care of her long, highlighted, blonde hair. I too am a blonde who wears makeup, but I also wear mainly dresses, skirts and fitted pants. We are both women, we are both feminine, and we both have masculine traits. The way I have been approached because I do not look like a ‘typical lesbian’ or how Maleah is treated because she won’t wear a dress or show cleavage is extremely unfortunate. Maleah says, ‘I do not wear dresses or low-cut shirts because I am uncomfortable, I do not like to bring attention to myself.’ What I love about her is that she believes that human beings should not have to fit in the same box, we all should be exactly who we want to be.

The statement ‘you don’t look gay’ comes up a lot in my world. I am almost embarrassed to say that my face turns red when that comment is made, where almost for a second, I am ashamed of my sexuality, but that’s not it. My face turns red because I am uncomfortable constantly having to explain why I am gay, who I am dating, and that I will not date a man. I should not have to do so, I should not have to feel as though I am so different from others because of who I love.

We both identify as lesbian; we are absolutely in love with each other and will never need a man to fulfill any of our needs. We have the support of our community, my family and her mother and sister, our friends and of course, each other. I am proud to continue to speak up for the lesbian community, and hopefully bring attention to this issue that many other lesbians have faced. I really hope some women who have been where we’ve been can relate and speak their truths as well. Feminine women who don’t ‘look gay,’ women who consider themselves ‘tomboys,’ little girls who want to wear a backwards baseball cap, the lesbian who fits the stereotype, and to the lesbian that has not even come out yet. We are here, we get it, you are not alone!”

This story was submitted to Love What Matters by Samantha Gorson of Florida. You can follow Samantha’s journey on Instagram here, and Maleah here. Do you have a similar experience? We’d like to hear your important journey. Submit your own story here. Be sure to subscribe to our free email newsletter for our best stories, and YouTube for our best videos.

‘Are you gay?’ I got a phone call from my dad one evening. I obviously responded with ‘Yes.’: Woman comes out to family after struggling with her faith

‘We went in thinking it’d be a fling. Neither of us had been part of a same-sex couple. Months in, we decided to come out to our families. It was all or nothing. It went as badly as it could have.’