“Two days before Ben was born, we were vacationing in Florida. My husband and I are both active-duty Army, and had spent the entire pregnancy trading off trips to do field training. He ended up spending about 8 away from late January to late March, leaving me pregnant, working almost 60 hours per week, and taking care of our 1-year-old. I was 35 weeks pregnant at the end of April when we flew from Tennessee to Vero Beach, Florida, for one last vacation as a family of 3. Little did we know, our little man was about to make a big entrance.

While we were in Florida, I had two Soldiers involved in a serious motorcycle accident. They were admitted to different hospitals in Nashville, an hour away from base. We flew home on Monday night, and I spent Tuesday on base collecting a small mass of paperwork to bring to their families. On Wednesday morning, I skipped physical training to drive to Nashville and see my Soldiers. The first visit went off without a hitch. The second, not so much. My Soldier was in the ICU at Vanderbilt University Hospital, with several severe orthopedic injuries. I tried to keep my composure and be professional, but the combination of being 35 weeks pregnant, seeing his injuries, and the smells and heat of the ICU (which is kept warms since most patients are exposed due to their injuries) caused me to pass out, and fall forward on my belly.

I woke up slightly confused and very, very embarrassed. As an Army officer visiting a Soldier, I hated to seem so weak. I apologized profusely, and insisted I was fine. My Soldier’s mother told me not to be silly — she was a nurse practitioner, and was amazed I even made the visit so late in pregnancy. The ICU staff knew I had fallen forward on my belly, and called the rapid response team to take me to the ER. I was placed on a gurney, in full uniform, and wheeled out of the ICU, through the ER. Since I was past 20 weeks, they then sent me up to L&D. I was handed over to a nurse named Mickey, who told me I needed to be monitored for ‘4 to 24 hours.’ My heart sank. I had so many things to get done at work. I was hosting a work social the next day. My daughter and husband were an hour away on base. I hadn’t even called my husband yet — he was in a meeting with a general officer, and I knew how important that meeting was.

I sincerely hoped I would only need four hours of monitoring. My vitals checked out great. The baby was moving, and his heart rate was steady in the 120’s to 130’s. Both my babies had lower heart rates. While I don’t know for sure, I believe it had something to do with my fitness. I had continued to lift weights and run through both pregnancies, even racing a 5k in my 3rd trimester while pushing the jogging stroller. (All with my midwife’s blessing, of course). Unfortunately, the contraction monitor was picking up regular contractions. Apparently, what I believed was the baby moving were actually Braxton-Hicks. Since they were coming every 2-4 minutes, it became abundantly clear that I wasn’t a ‘4 hour’ person. I was SO upset. For all intents and purposes, my baby was fine. My cervical check showed I was ‘high and tight,’ really nowhere close to going into labor. But the contractions, though ineffective, were going to keep me in the hospital.

I fought it the best I could without being downright stupid. I really, really wanted to leave after 4 hours, drive the hour north to our hospital on base, and finish being monitored there. I FELT fine, the baby wasn’t in distress, and it would be so much easier for my husband and daughter logistically if I were at our local Army hospital, instead of an hour away at Vanderbilt. I kept writing the whole thing off, because in my mind I should just be allowed to leave. The attending OB told me that technically I could leave, but it would be against medical advice.

Our nurse, Mickey, came in after the OB and told me she really thought I should stay. She also tipped me off that many insurance companies won’t cover visits where a patient leaves against medical advice. After a few phone calls, I found out mine was one of them. So, I stayed. My husband came down with an overnight bag, I finally changed out of my uniform, and I got moved out of triage to an actual room. As I ate my dinner of Jell-O, my contractions continued to slow. By about 9 p.m., they had completed ceased. I fell asleep shortly thereafter, thinking that at least I’d get a good night sleep knowing my toddler wasn’t around to wake me up.

But that good night’s sleep ended shortly after 10:30. Baby’s heart rate was dropping. A pair of nurses rushed in to see if they could adjust the monitors to get a better read. I wasn’t very concerned at first. My first baby had been hard to monitor because she moved so much, and I assumed this baby was doing the same. The nurses moved me, the monitors, and put me on oxygen to help bring his heart rate up. A few minutes later, an OB came in to the room. She looked at the latest readings, and said, ‘We should probably talk delivery options.’

My response? ‘Um, excuse me?’ This all had me totally off guard. She repeated herself, and I asked what the options were. It was kind of a rhetorical question — I was not in labor, and the baby’s heart rate was falling. So the plan was already made: c-section. Sometime between 10:45 and 10:50, she made the call. They picked up the room phone and blasted a call to the OR team. I was still a little confused, but amazingly calm. There was NOTHING I could do to change this. This was the only way to save Ben.

I had signed none of the consent forms, so I had people essentially briefing me and getting consent the whole way to the OR. The OB called my husband, dead asleep at home, while they pushed me down the hall. I met the anesthesiologist and pediatrician as they moved me from the bed onto the OR table. I asked what my choices were for anesthesia — no time for anything but a full knockout. I could hear the OB pressuring the anesthesia team to hurry as the nurses prepped my belly. Curtain up. Underwear off. Dress off. Cold water. Iodine. I could feel it all. Then the anesthesiologist said, ‘Okay, we’re putting you to sleep now.’ And for the second time that day, I blacked out. My husband’s phone showed he got the call at 10:53. Ben was born at 11:06.

My husband drove through the dead of night, sleeping toddler in the car, no clue if we were alive or dead. He finally got through to my sister, a med school student who was just getting off an ER shift at Vandy. Successful delivery. Baby boy. 5 lb, 9 oz. 18.5 inches. Healthy. Mom was in recovery. By the time he arrived, I was being wheeled back to my hospital room. Just after 1 a.m., baby Ben joined us. He was tiny, but healthy. He spent some time in the NICU to get help breathing and feeding, but he was fine. We later learned that my placenta had abrupted when I fell. Baby Ben had survived the day on limited oxygen. His heart rate hadn’t dropped until his lifeline ran out. If he hadn’t been delivered that night, he wouldn’t have survived.

I look back and think: I almost left. I almost walked away. I almost let the inconvenience cost my son his life. To this day, I look back and thank Mickey, my angel nurse, for insisting I stay, and for my insurance for their policy. Every time I look at my thriving 8-month-old, I’m overwhelmed with gratitude. He’s here, he’s alive, and because of our experience, I don’t take a single moment for granted.”

This story was submitted to Love What Matters by Erin Williams of Brookline, Massachusetts. Do you have a similar experience? We’d love to hear your journey. Submit your own story here, and subscribe to our best stories in our free newsletter here.

‘Babe, while you were gone, they found some things wrong with the baby.’ I had no idea how I was going to tell him. He missed it all. He had no clue.’

‘Normal people had 9 months to prepare for a baby. We were given 2 hours. We received an unexpected phone call. All of a sudden, we went from 0 to 2 babies!’

‘We needed to find a surrogate after my cervical cancer. My mom offered to carry my babies. She risked her own life to give birth to my children.’

“Not feeling them inside me was a roller coaster of emotions. At times I felt as if this was not even happening. Having these two bundles finally lay on my chest for skin to skin contact allowed me to feel that connection with them I had missed.” 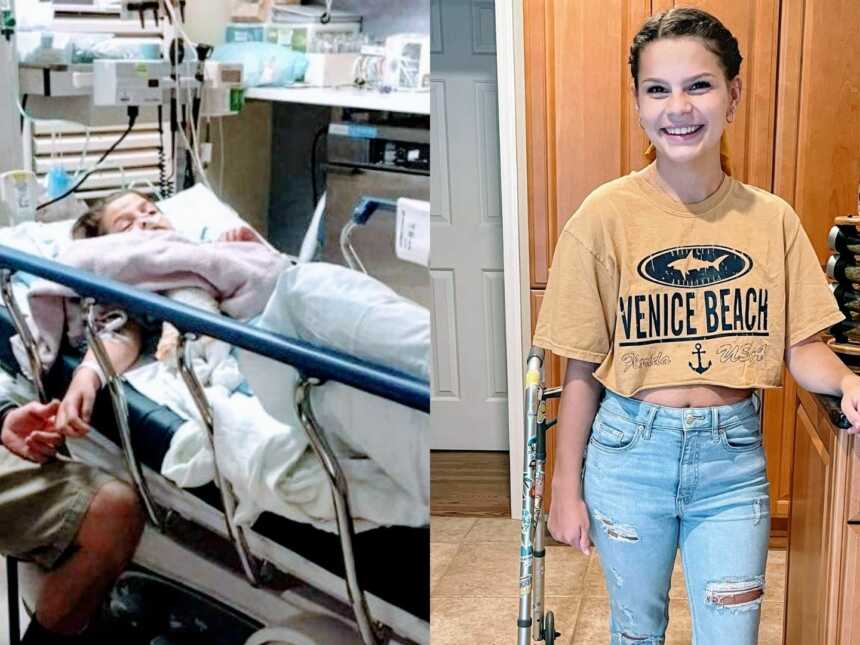 ‘Doctors told us our daughter would no longer walk. ‘She’s going to prove you wrong, you wait and see!’: Young girl with spinal cord injury defies all odds

“She couldn’t even sit up without falling over. Our eleven-year-old daughter had become a six-month-old all over again. To this day, almost five years later, we still don’t know the cause.”