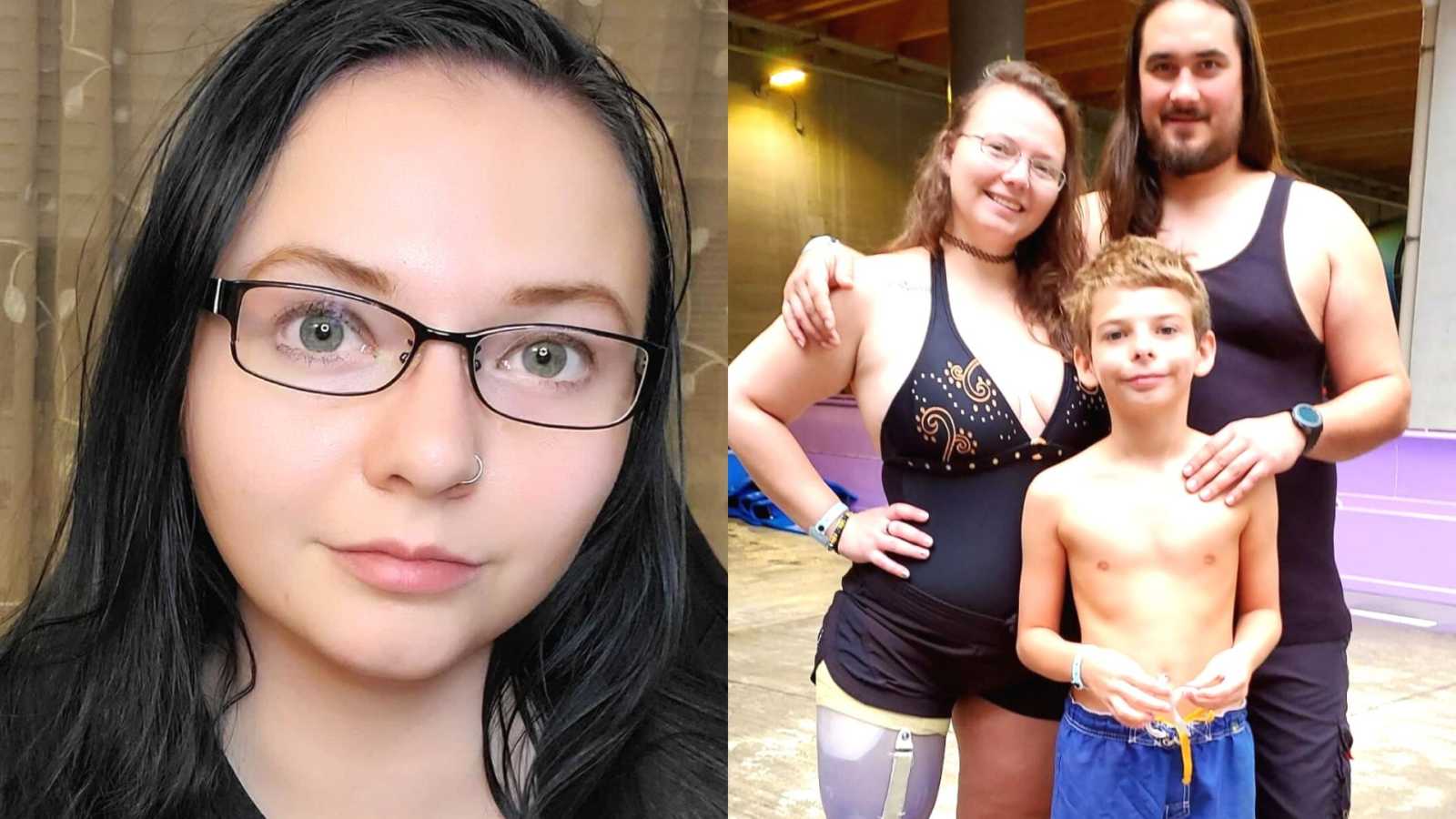 “When I was 20 years old, I was living a fast paced life. I was a full-time university student, working full-time, and a single mother to my son, Jason. It all came to an abrupt halt when I was diagnosed with a rare pediatric bone cancer called Ewing’s Sarcoma.

In early 2014, I developed an indescribable, deep ache in my right knee. It took months to get a diagnosis because my symptoms were minimized by doctors. I was told, ‘You are over-exaggerating, you need therapy, you need to lose weight,’ and was accused of ‘pain pill seeking.’ The pain and frustration kept getting worse until I firmly demanded a doctor order imaging on my leg.

‘Imaging is showing something bad,’ the doctor said. This ‘something bad’ came as a relief because I was finally going to get answers. I underwent a bone biopsy and had to wait a week more for my results. The day after celebrating Mother’s Day with my then 3 year old son, I received a call from the surgeon. ‘You have a rare cancer called Ewing’s Sarcoma. It is very aggressive, but know we will fight this even more aggressively.’ I collapsed into my kitchen chair in disbelief and put my face in my hands. I didn’t think cancer could happen to me.

I met the chemotherapy oncologist the next day and she told me, ‘It’s urgent we start treatment,’ so I only had a week to get my affairs in order. I would not be able to continue my schooling and work. Chemotherapy treatment for Ewing’s Sarcoma is one of the toughest cancer protocols out there since there has not been any innovation in years. There is little funding into researching this disease because each year there are only about 200 Ewing’s diagnoses per year in the United States. We have a population of about 330 million.

Since the drugs are so old and toxic, much of the treatment is required to be inpatient. At this point, chemotherapy and surgery didn’t scare me. Being away from Jason and what would happen to him if I did not survive was the most frightening thing about this whole ordeal. Thankfully, Jason’s paternal grandmother stepped up to the plate and became Jason’s primary caregiver for the 10 out of 12 months I was inpatient, fighting this beast. I knew he was in good hands but having to essentially ‘give him up,’ tore me apart.

In the hospital I did everything I could to make sure my son would remember who I was and I could still provide him with guidance and comfort, even if I passed away. I recorded my voice reading children’s books for him. I recorded videos for him. I wrote letters to be given to him as he went through different milestones in life I might miss out on like graduations or his wedding. I also wrote him letters for things we all go through, like failing tests, feeling inadequate, dates, heartbreaks, and more.

I arranged to see him as often as possible, so he would visit me at the hospital on weekends. Seeing him was what motivated me to continue treatment, but I definitely had some lows because treatment was absolutely torturous. Staff at the hospital jokingly called me ‘Murphy’s Law Girl’ because almost every possible medical complication which could go wrong in treatment, did go wrong. I laughed along, too. After everything I’d been through, I developed a dark sense of humor as a coping mechanism. But there were points I would beg for treatment to stop so I could go home and be a mom. I was sternly reminded if I stopped, I may only get a few months with Jason. If I pushed through, I could possibly be a mom for years to come.

In September of 2014, I had limb-salvage surgery where a surgeon removed the cancer. I felt overjoyed I got to keep my leg because I had known since treatment started amputation was always a possibility. I was almost halfway through. I started seeing the light at the end of the tunnel.

It all came crashing down in December of 2014 when I went home to visit my son for a couple of days. I quickly declined and went into septic shock. The home nurse called paramedics and the amount of pain I was in could not be controlled because I developed a tolerance to opiate medications after being on them for treatment. The paramedics said there was no more time to try to get me comfortable, so I had to brace myself. I swear with everything in me I tried to brace myself because I knew my son was able to hear everything going on, but I screamed and cried out in pain.

As they carried me out I looked down and my son was looking up at me in terror. He was watching his mom being carried away, screaming and crying, but I used all the strength left in me to tell Jason, ‘I love you, and I promise I will be back.’ I then came to the horrifying realization I made a bold promise.

It quickly became a decision between life and limb since the sepsis started because a hospital borne pathogen got into my limb-salvage wound. On December 9, 2014 I had an above the knee amputation.

I did not know how to tell Jason I lost my leg, so it was kept secret. On Christmas Day, he came to visit me. He noticed something was different so he pulled the blanket off of me and said, ‘Mommy your sick leg is gone!’ I froze, then responded, ‘Doctors had to take it off because it was making me sicker.’ Jason replied, ‘Okay then. Let’s color.’ It didn’t matter his mother’s leg was gone, because his mother was still here.

Despite just having undergone my amputation, I still had to complete treatment. I struggled with being physically sick from chemo, emotionally wrecked from all the trauma, having to learn how to do things as a new amputee, and still being separated from my son.

I was finally declared to be in remission on May 14, 2015. My 5 year remission anniversary is coming up, which means I will be able to consider myself cured instead of in remission.

I have had many ups and downs these last 5 years and life isn’t totally easy, per se. But these last 5 years have been the best years of my life. Mine and Jason’s little family grew from two to three, free from drama and abuse; instead with constant support and love from my fiancé Peter. He picks up the pieces when I physically or emotionally cannot, and most importantly, he loves and guides Jason as though he were his own blood. Jason and I are still healing, and Peter is helping us heal.

This experience has shown me what is really important in life, and it is happiness. Life is too short and too fragile to not do what makes you happy. I am humbled and grateful for everything I have now, because knocking on death’s door almost took everything from me. I purposely share my story because I don’t want people to need something catastrophic to happen to them, and for them realize what truly matters in life. Happiness matters. And that’s why I can say these last 5 years have been the best of my life, because I finally put my happiness first.”

This story was submitted to Love What Matters by Irene Blum. You can follow her journey on Instagram. Do you have a similar experience? We’d like to hear your important journey. Submit your own story here. Be sure to subscribe to our free email newsletter for our best stories, and YouTube for our best videos.

‘The subject line read, ‘Down Syndrome Baby.’ My heart skipped a beat. That very morning a precious baby boy was born.’: Cancer survivor adopts ‘special gift’ son with Down syndrome after infertility from endometriosis

‘Doctors told me it was ‘a blocked milk duct.’ It felt like a lemon seed under my skin, close to my areola, and hadn’t hurt at all.’: Woman with breast cancer stays positive, ‘I’ve got this. Everything will be okay.’