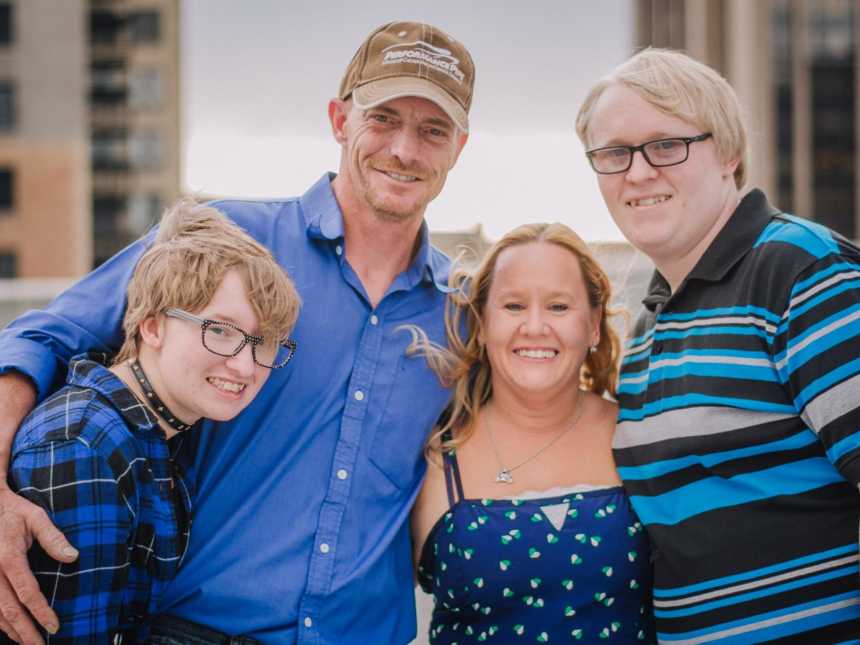 “I was halfway through my senior year of high school when my daughter Ariana was born. Her dad and I got married and her sweet not-so-little brother Alexander was born shortly after. The kids are one year and three days apart and have always been close friends. Our marriage wasn’t perfect. We were way too young and had to grow up way too fast, but we loved our babies and we were determined to make it work for them.

The kids’ dad was the sole income for our family, he had a small business and I helped at home with the accounting and finances. The course of our lives changed when the kids were 4 and 5 years old. Their dad was in an ATV accident while out camping with some friends. He had been intoxicated and it was dark, he took a corner too fast and the ATV rolled down a steep embankment. He had multiple injuries including a fractured neck and spine. It took 56 staples to connect his scalp back together. He was not in the hospital very long. We discharged only a few days later with a C-collar, full spine brace, no health insurance, and enough medications to run our own pharmacy. I naively thought this was a good sign, he got lucky and he would be fine in a few months. Things went from bad to worse after that. He was always in pain; the medication was never enough, and he never really went back to work.

My children’s father was set on a path that would lead him to a heroin addiction. The young man I had married, the one that had loved his babies and was so excited to be a dad was gone. This addict was not someone I recognized. He was not kind, or sympathetic. He was manipulative and angry. I told the kids it was the medicine and the accident that were making him sick. He did not change overnight, it was a slow deterioration like the life just faded out of him. If it had been quick maybe it would have been easier to stop it, or intervene sooner, if I had only known what I know now.

I was so angry at him, we all were. I couldn’t understand how someone would choose that life over us. I couldn’t understand how someone could just give up. I felt betrayed and abandoned. We were supposed to raise the kids together, and now I had to do it alone. I had to start over. He just got to walk away. In my perspective, he took the easy way out. He was pinned the victim; drug addiction is a disease after all. He was going to be rehabilitated and given a fresh start. All I could think was, ‘What about us?’ What about all the damage, the hurt, the debt, the responsibility and the broken promises he left on us? I was 28 years old, the kids were devastated that I had lied to them. They were angry at me for giving up on him. I was so consumed I could barely comfort them. We were all grieving our losses in our own way. I held onto that anger for a long time. Being a single mother was the hardest thing I have ever done. Failure was not an option. I had to be both parents and fulfill both roles.

We met Adam 8 years ago. We have been married now for more than 7 years. Adam changed the way I saw addictions. He was an addict himself. Meth. He came from an abusive family, his father beat him, his siblings and his mother. Adam’s mother eventually left the relationship but by then his older siblings had scattered. Adam and his mother moved in with Adam’s future stepfather, Frank, a man who had a positive influence on his young life. Frank was a good man, and he taught him the value of hard work. A few years later, he lost his mother to cancer when he was 17, and Frank died shortly after from liver disease. Adam quit school to get a job and help support his sister.

Adam was introduced to drugs by a sibling. It was a lifestyle he lived for a long time. He had only overcome his addiction shortly before we met. He was genuine and honest about his mistakes. He lost everything to his meth addiction, including his own 2 children. That was the final wake-up call that made him want to stop. Adam and I have the same perspectives on life, bad things happen to everyone, and we all make mistakes. It’s what you decide to do with that and who you decide to be after that that defines you. Adam had two important men in his life, one that taught him exactly who he did not want to be, and one that showed him there is a better way. He and his siblings are all very close now and we gained a wonderful extended family.

The thing that drew me to Adam was his kindness. He was consistent in his actions and he leads by example. He stepped in and raised our two children like they were his own. Adam is so patient and having him in our lives has been such a blessing. Our little trio’s missing piece. I think he is an inspiration to others who are suffering from addiction that you can stop, and you can go on to rebuild a great life. I think our story is less about addiction and more about staying positive and never losing hope.

The truth is, I am so blessed and I was never truly alone. My sister and my mother put their own lives on hold and helped me every step of the way. I did not truly understand addiction, and forgiveness took a long time to give. Looking back now I can see that those experiences led us to something better and you cannot control other people’s choices, only your own. The best advice I was given was, ‘You can keep your anger, as long as you use it to move forward.’ Eventually it will all burn out.

We are celebrating a lot of milestones these days. Ariana’s and Alex’s high school graduations, Class of 2016 and 2017, and most recently I earned my Bachelor’s Degree, Jenny Class of 2018. Teenage Mom to college grad. We have a lot to be grateful for. Our motto in this family is ‘Never give up, never surrender!’ I have never been happier or more content in my life.”

This story was submitted to Love What Matters by Jenny Beazer of Utah. Submit your own story here, and subscribe to our best stories in our free newsletter here.