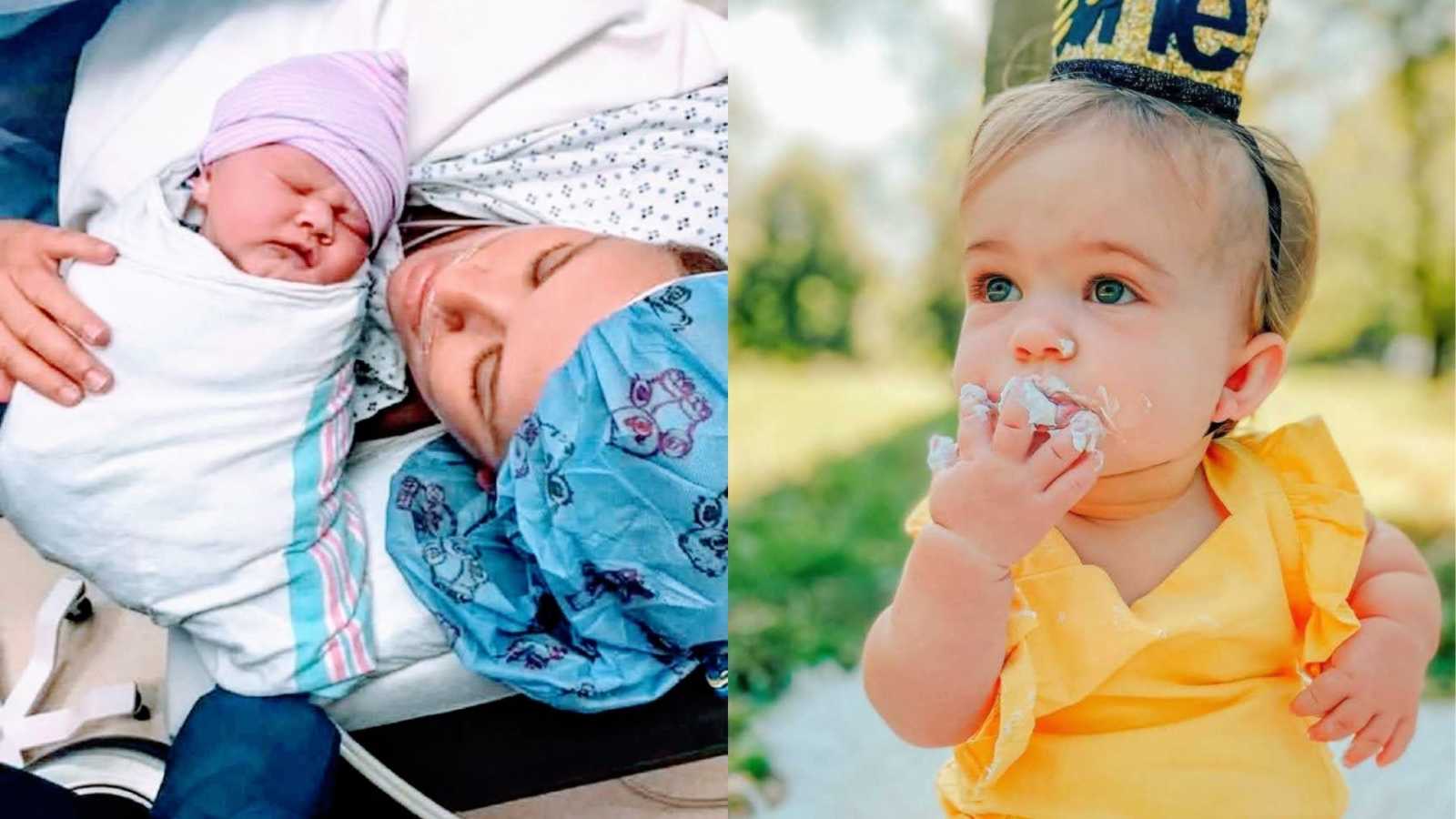 “The weekend was over 100 degrees, which for someone that was nearing 31 weeks pregnant was torture. We spent Sunday cooling off at the movie theater—it was the weekend The Lion King opened. As a kid growing up in the 90s, I was excited to introduce my then 3-year-old to Simba (and even more excited about Beyoncé) in the remake. It was a nice family outing and it is the last real memory I have of the ‘before.’ ‘Before’ our family changed. ‘Before’ our lives took a turn we never in a hundred million years would have expected.

We had tried a year for this baby, our second child, and after a year of negative test after negative test, being pregnant with this baby was a blessing. But truth be told, I am an awful pregnant woman. I am convinced at every appointment that I am going to be told there is something wrong with the baby. After a high-risk marker for Down syndrome test result in the first trimester, I never really felt settled with this pregnancy. I always felt something was ‘off.’ The prenatal testing was clear though. We didn’t see any issues with the baby in any of the multiple ultrasounds I had due to being Advanced Maternal Age. So, I tried to settle myself and enjoy what I knew was going to be my last pregnancy.

One thing was ‘off’.’ I was diagnosed with Gestational Diabetes. So mid-July, I met with the Maternal-Fetal Medicine doctor to discuss diet (no more pasta!?!) and receive my testing supplies. We made an appointment for my follow-up on July 23rd. (One perk of having Gestational Diabetes is getting to see your baby every two weeks to monitor growth and overall health. While I was craving a brownie and pizza more than life itself, I won’t lie and say I didn’t enjoy getting to see the baby every 14 days and the extra attention). As I left her office that mid-July day, I recall her telling me with a smile, ‘The baby looks perfect. Everything is measuring well, and I have no concerns.’

Two weeks later, on that fateful day, I dressed in the lightest weight maternity dress I owned and squeezed in a quick MFM appointment before work. The tech was taking what seemed like a lifetime to get the measurements, but I didn’t care, I was just mesmerized watching the baby squiggle around doing backflips. This was the first scan my husband didn’t attend, so I asked for a few photos of the baby to show him her adorable face, a face that was such a clone of her older sister. Chubby cheeks and all.  She printed off a few 3D photos and joked with me that the baby looked bald. After getting measurements of her arms and legs a few times, she left me alone while she went to get the doctor. And as the minutes ticked by, it started to click—something was wrong.

Fifteen minutes later, the doctor came in, sat down, and bluntly stated, ‘I think she might have achondroplasia.’ I knew I knew the word, but my mind was spinning, and I couldn’t figure out exactly what it was. Then she said, ‘Dwarfism,’ as she passed me a box of tissues.

How? How could this be? I am 5’7.’ My husband is 6’3′. We have no family history that we knew of. She told me we have a 20% chance of her having dwarfism, sent me off with barely any information, and scheduled my husband and me to come in the next morning for genetic blood work that is able to detect a mutation to the FGFR3 gene. Blood work that took 4 looong weeks for the results back from the lab.

In those four weeks, we had two more scans, neither scan showing more than 1-2 days worth of growth. Four weeks that I went from sheer panic to saying, ‘I put this in God’s hands.’ Four weeks of never having my phone more than an arms-length away to ensure I didn’t miss a call. Four weeks of falling down the Google rabbit hole and trying to find stories online of people that had the same slow growth we were seeing and the result not being dwarfism. But also, four weeks that I found some very supportive online groups. They were invaluable to me then in offering advice on items we would need in case our daughter did have dwarfism and simply being a support for the rollercoaster of emotions I was riding.

Then, four weeks to the day since hearing the word that would change the course of our lives, we sat in that MFM office and heard the news we were waiting on: POSITIVE. Yes, we cried. But the wait was over, and honestly, I was just relieved. Relieved we had answers and I could (hopefully) sleep again. We knew what we were facing, and now we had four short weeks to prepare for our daughter’s birth. I will forever be thankful for finding out prior to her birth. To allow myself time to grieve the loss of the child and family I thought I was going to have, and turn my attention to celebrate the baby that God entrusted with me.

And on September 19, at 11:32 a.m., she was born! We were able to finally breathe and celebrate her, and what a celebration we had! The nurses played Beyoncé for me (notice a theme here?) during my c-section. We sang ‘Happy Birthday’ as she was coming out. I pretty much was passed out during my first c-section and didn’t get to hold my older daughter until I was in the recovery room, but this time, I got to hold her. I got to cry over her and thank God she was finally here!! Instantly, we noticed markers of achondroplasia: adorable ‘starfish’ hands, shorter limbs, and slight frontal bossing at the forehead. But more than anything, we noticed how BEAUTIFUL she was.

I couldn’t imagine her not being with us now, nor could I imagine her not having dwarfism. It’s part of who she is, and what makes her so perfectly HER, but it isn’t all she is. She’s a smart little girl who loves to chase the cat around the house. Who dances to ZZ Top. Who never met a fruit she doesn’t like. Who has worked hard to learn to crawl and sit and pull up. Who laughs at her big sister’s antics, and crawls into my lap when she wants a ‘bear hug.’

I pray daily that my husband and I have the tools to teach her to be proud of herself and be confident in the skin she is in. Because, let’s face it, those with dwarfism are often mocked and bullied. And because I want the best life for her, I am now her (oftentimes outspoken) advocate. I want to educate people that dwarfism isn’t something to mock or belittle. People with dwarfism are the same as us—their legs are just a bit shorter!

So, for anyone currently in the same seat I was in July 2019, feverishly googling ‘short long limbs’ and dwarfism, I want to tell you…IT WILL BE OKAY! I know it’s cliché, but it’s honestly true! If I could go back and tell myself then to just ‘breathe,’ I would have saved myself many sleepless nights and days of anxiety.

Yes, your child will be different. And, so will you because of them! I have not met one parent of a Little Person that resents having a child with dwarfism. Every parent I have spoken with is in awe of their child. Of their adorable hands and chubby rolls. Of their bravery while going to doctors, MRIs, and sleep studies. Of their perseverance in achieving milestones such as crawling and walking. Every parent I have spoken with has said how honored they are to have been entrusted with their child. That they make life better. And they do.”

This story was submitted to Love What Matters by Melissa Hess. Submit your own story here. Be sure to subscribe to our free email newsletter for our best stories, and YouTube for our best videos.

‘Ma’am, have a seat.’ I wanted to scream, ‘Look at the scar down my chest, I’m not making this up!’ They didn’t believe me.’: Woman finally diagnosed with invisible illness Myasthenia Gravis after 6-year battle