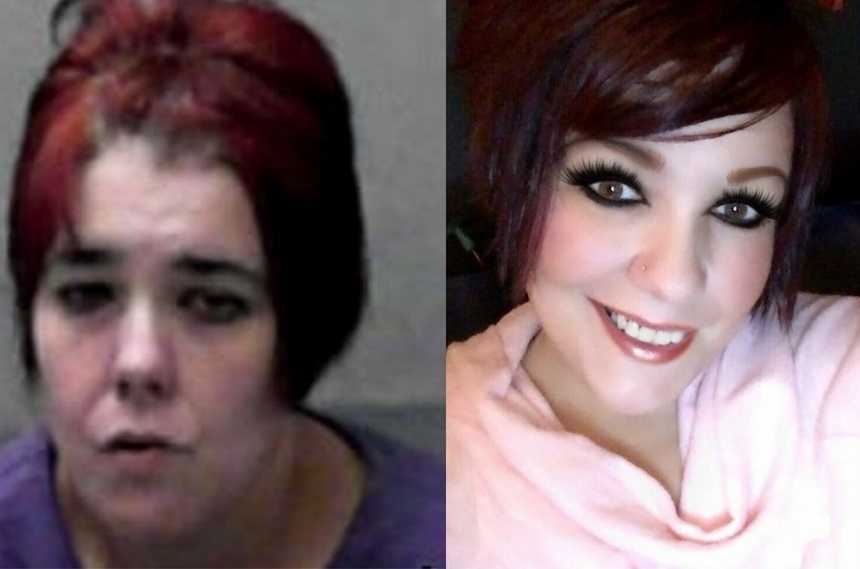 “I was a 13-year-old average girl in a small town of West Virginia. My dad was a coal miner and my mom was a stay at home mom. I was a cheerleader, in Jr. R.O.T. C. and I loved writing poetry. I had a very good childhood with loving parents and family, but I suffered migraines from an early age. Due to that, I was put on narcotic pain medicine. My parents had no idea the destruction it would cause me and them.

I was diagnosed with a chemical imbalance at age 8 and never was on any medicine for it until I was older. I couldn’t stay focused in school, my moods were not that of an average person, so when I was put on the pain medicine I realized that it did more than cure a migraine — it became my ‘wonder drug.’ I’d always find where my mom would put them and slip a few here and there because I could finally stay focused, I socialized more and my moods were stable. Over the years, when 2 or 3 pills wouldn’t help, I’d end up taking at least 5 a day so, by the time I was 18, I was a full-blown addict to medicine from a doctor. Had my parents known the destruction it would cause, they never would have allowed me to be put on them. But they were from a doctor so they must be safe, right?

I was in and out of rehabs that put me on more medicine that would cause me to be suicidal and by the time I was 20, I had given birth to a beautiful daughter that my parents had to raise because I was in no shape mentally or physically. I tried the best I could to get clean on my own because the doctors sure weren’t helping me by putting me on more medicine that I’d become addicted to, like Xanax or Ativan, so I got introduced to crack by a friend and went farther into the pit I already was in.

I never woke up one morning as a child and decided I wanted to be an addict. I wanted to become a beautician. I wanted to grow up and have my own family. But the addiction stopped all of that and I went in a downward spiral. I remember being raised in church and taught that Jesus Christ could save me from this nightmare, and through the years I gave my life to Him and would be okay for a while, but suffering with a mental illness when something would set me off and I’d run back to the pills or crack or alcohol.

I’d never wish addiction on anyone or any family. Surely not mine because my parents did everything they knew to do to help me, but I had to help myself and I had to want to get clean. I’ve been in jail, I’ve been beat up, raped and left for dead, and it still didn’t stop me. In 2008 when my dad passed away, that set me off more. I took 180 Ativans within a weeks time, praying to die because I was so tired of waking up sick and needing a fix. I was tired of life. But in 2010, my daughter gave birth to a beautiful baby boy and though I slowed down some, I couldn’t stop completely on my own. The withdrawals were so unbearable that I’d use so I wouldn’t feel sick. My second grand baby was born in 2014 and my daughter, who’s always been my biggest supporter, was married and out on her own and my mom was diagnosed with MS. So, at this point in my life, I had to fight and I mean fight HARD for my life and my soul.

I had to go back to what I was taught — that Jesus Christ could and would save me from the nightmare of addiction, and after countless times of almost dying, I ran to God because honestly I had nowhere else to turn. It’s not easy, but as time goes by it does get a little easier. I had to learn to separate myself from a lot of people who’d enable me or who used because I knew if I didn’t I was going to end up with life in prison or in the grave. And with 2 precious grand babies that gave me hope, I found the hope to fight. Now I had 2 little sets of eyes watching me and looking up to me, and that gave me a reason to want to live.

Struggling with an addiction and mental illness isn’t easy by any means, especially for the families of addicts. It’s something I’ll have to fight for the rest of my life. I do have bad days, who doesn’t? But it’s nowhere near the torment of what I went through in my active addiction.

I’m doing a lot better now with a wonderful support system and my precious grand babies that help me more than they’ll ever know. I’ve got a blog page that I use as a platform to share my story in hopes to give others hope that getting clean isn’t easy, but it is possible, and no matter how many times I fall, I rise back up and I thank God each and every day for giving me a second chance at life. Technically I should be dead but God spared my life so I can help and inspire others that are struggling with addiction.

If I can beat this, anyone can. I don’t know when rock bottom for anyone ever is. Sadly, it’s usually death. I don’t know how many times I’d take too many pills or grab a knife to try to end the pain. Maybe in my younger days it was all fun and games, but when it got to a point that I’d steal from my parents to get my next fix or lie to get money so I could use, that was misery. But did I feel bad? Of course not. My addiction had me so bound that I didn’t even care about myself.

There were days I’d say to myself that I’d stop, but the withdrawal from all the alcohol and pills was so unbearable I’d think I could just do a little bit of something and I’d be okay, to make the pain go away. But that never happened. I’d go right back out on the streets. My family had tried hospitalization and tough love and nothing was helping at all, not even going to church. Although I do believe in Jesus Christ, religion in any form doesn’t help an addict that’s active in addiction, because for me it made me worse and hate anyone who tried to tell me otherwise.

In 2016 I was in a bad car wreck where I was so messed up I don’t even remember anything. Apparently I nosedived down a 10-foot drop off and made it out alive with only a bruised knee. A week later I was arrested and taken to jail. The charges were just a fine, but it could have been much worse. I’ve fought to stay clean and sober, and most of the time I isolated myself in my attempts because I’m suffering with a mental illness as well, and I can’t take the medicine for that because it makes me black out and worse. Dealing with that and fighting addiction at the same time isn’t easy. It’s an every day battle and some say, ‘One day at a time.’ No! It’s literally one second at a time because the urges do come and it’s not easy. Especially if that’s what you’ve known your whole life. I wrote a poem to best explain how I was feeling during my active addiction:

‘You took the best part of me when I was 13 years old. You abused me, left me for dead and took my soul. You took me away from my mom and dad, everyone who loved me, you made sad. I couldn’t be a mom to my kids because you always had to win, you caused me to want to kill myself and not live. You stole my life from me and didn’t even care, laughing in my face seemed so unfair. You had me bound in shackles and chains, you were all I knew to kill the pain. I’m older now and I won’t give up. I’ll face this head on and not run. Staying with you is no longer a thrill, I’ll not apologize because my happiness won’t be found in alcohol or a pill.’

Today I still fight for my life. I go second by second, and though relapses do happen, I’m doing a lot better than I was. I’m not in crack houses or putting my family or myself through hell. I have two beautiful grand babies who love me and make live worth living. In December I’ll have a year sober and clean. I’ve had a few setbacks but I don’t wake up chasing that high because life is so much more than that, and I’m slowly becoming the person I was meant to be.”

This story was submitted to Love What Matters by Stephanie Deaner, 45, of Logan, West Virginia. Do you have a compelling story about overcoming your addiction? We’d love to hear from you. Submit your story here, and subscribe to our best stories in our free newsletter here.