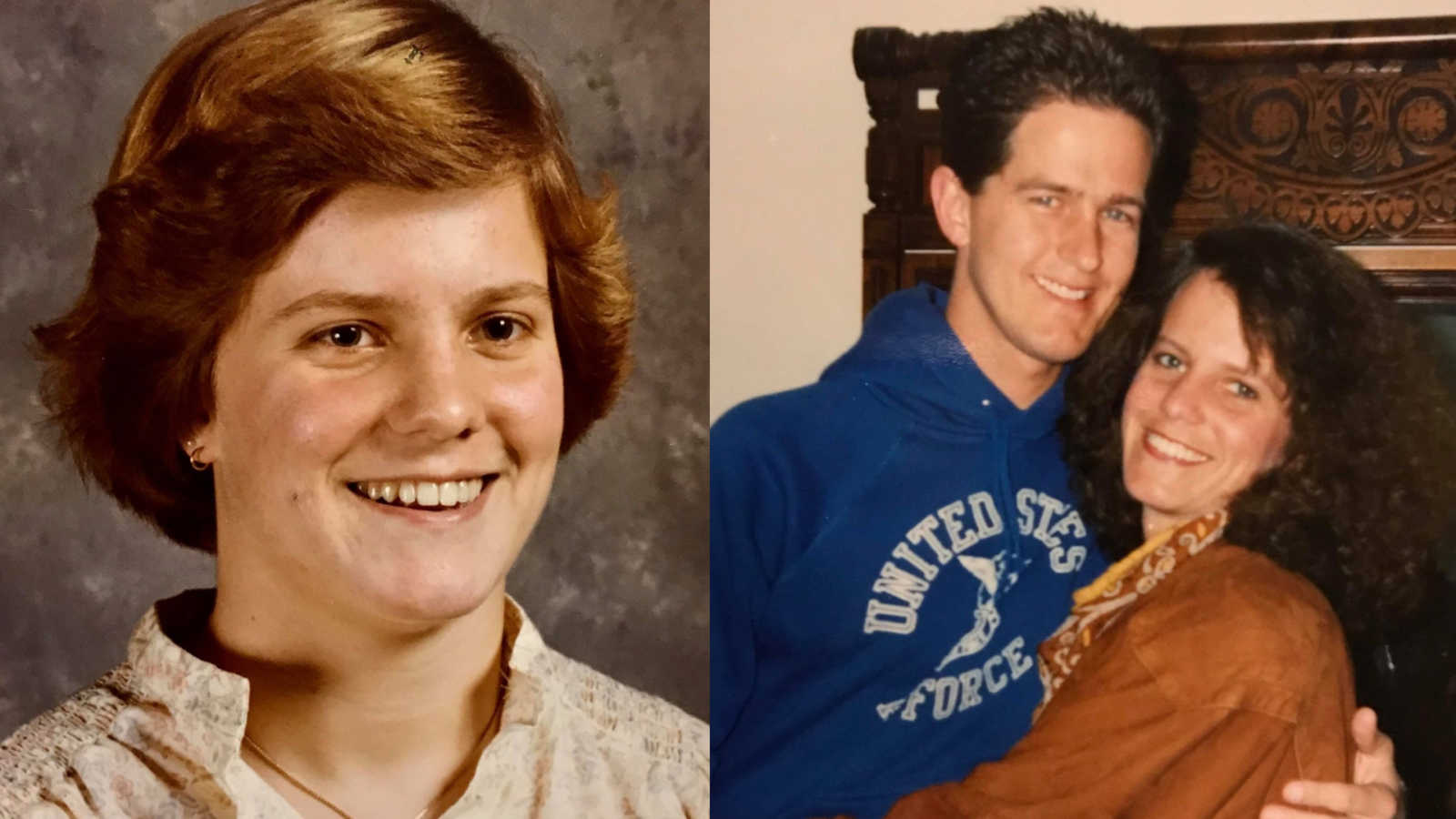 “How many times is too many? There is something liberating about being in your 50s. Finally, after so many years of caring what others think – you just don’t. I mean, I care to the extent I continue to want to be a good person. I want to do good in the world. I want to continue to grow (although maybe not another pants size) and learn. What I don’t want to do is lose sleep wondering what people think about who I am or the decisions I’ve made over my lifetime, so far.

I’m going to put this out there and get it out of the way… I’ve been married four times. Yes, you read that right, four times. I’m not sure if I should start from the beginning and work my way to the present or give each one the time and recognition they deserve. Let’s start at the beginning and we’ll see where that takes us.

I met my first husband when I was in 8th grade and we were the same age. He lived in Florida and I lived in Pennsylvania. So how did we meet you may ask (remember, this was before dating services, email, the internet, etc.)? I met him when a cousin of mine was visiting from Florida a few months prior to him and I meeting. She had a photo and I asked her who ‘he’ was. She said it was my cousin. I was young but I was pretty sure I had met all of my cousins at some point in my life. I explained he was not my cousin. She thought for a moment and said, ‘That’s right, he’s my cousin not yours.’ Hang in there it gets less complicated shortly. He was her cousin on her dad’s side and my cousin with the photo was my cousin on her mom’s side. Got it? Just so we are clear, the guy in the photo was NOT related to me. Which I was quite happy about, because he was very cute.

Fast forward a few months to my solo trip to Florida, first to visit my grandparents in Fort Lauderdale and then onto Sebring, Florida, to visit my aunt and cousins. Perfect! I wanted to meet my cousin’s cousin. She planned a night to go bowling and I was right – he was perfect!

We met the next day to spend some time together at the lake. I gave him a school photo (remember when you shared those with friends?). On the back I wrote him a note sharing with him that I would see him again, and we would one day be married. Who in the world writes this on the back of their 8th grade school photo? That would be me!

So began our letter writing crusade. Waiting for the mail was one of the most painful things in my life. And remember when you had to wait to have photos developed and after you finished a roll in your camera you had to wait some more to save your money to actually have them developed? Ahhh… the good old days. The letter writing went on for months and we occasionally shared a blurry photo of each other as a bonus. After months of writing he came to visit me at the shore (where we lived every summer). He arrived and it was weird. We didn’t really like each other. What happened?

We got through a week of being polite at best and said our goodbyes. That was that. Until it wasn’t. Fast forward to 11th grade. I got a letter. The sparks reappeared. Back we go to writing and waiting. Oh the pain. This time around there was a bonus. He had a job so he was allowed to call me on Saturdays. The best days were the days I didn’t miss his calls. Again, no answering machines so luck of the draw if I was home when he called. My mom and dad loved our relationship because we never saw each other. It’s a parent’s dream come true. Little did they know their world was going to be turned upside down, so I am glad they had a year and a half of peace with their daughter’s long distance relationship.

My parents assumed and told us we were going to college. Education was a must. Let’s just say it was not the first time  I was the one to break the rules in our family. You know, there is always as least one in every family. There were actually two in ours – me and my brother, Jeff, but that’s a whole other story.

As the end of my senior year loomed in front of me my parents started asking where I wanted to go to school. I told them I didn’t. That was not the correct answer. They picked out a Woman’s College – are you kidding me?! I asked about the local community college. They said no because they felt I wouldn’t continue after the two years. They were probably right. I invited him up from Florida for my graduation and said, ‘Oh, and by the way, how do you feel about packing up and running away back to Florida with me right after graduation?’ I’m not sure he thought I was serious (he didn’t know me well enough – yet!).

My senior year went on and he arrived from Florida about a week before graduation day. In the meantime I was packing and hiding things to get ready for my escape from having to go to college. I was beyond excited when he pulled up in his gold Pinto. Obviously, not because of the car but seeing him in person once again. We were inseparable and in love.

Graduation night arrives and I am 18. Time to run away from home. Oh my gosh, what in the world was I about to do? I didn’t want to go to college. This seemed like the only option. Of course it wasn’t but I was 18 years old so I thought it was. Sunday morning everyone headed to church. We ran back home, loaded the car and we headed out the door with my dog no one really liked and started our trek to Florida. I left my parents a note on the kitchen table.

THE NOTE – It was a note that would live in infamy. I should have never written it. I was taught to never put things you should discuss in person in writing. I should have listened.

I never saw that note again, but I was reminded it of it when a box came for me from my parents that Christmas after I ran away and it had a small bag of coal in it (I’m not kidding) with a reminder that the note I left behind would forever be saved in my parent’s safe deposit box.

So we arrived in Florida a few days later. His parents asked us our plans. We said we didn’t know – again, we were 18 (he was turning 18 in a few days). They informed us that we would not be sleeping in the same room unless we were married. After they went to bed he asked me if I wanted to get married. I thought about it for a minute or two and said, ‘Sure.’ We were married in a little Florida mission with about 8 of his family members and his best friend 12 days after I graduated, and after spending a total of about 3.5 weeks with him over the past 4 years. I think we were ready!!!

Amazingly, we did OK. I patched up most of the damage I inflicted on my parents. We had an apartment of our own. We moved to Florida’s east coast and lived in a 28-foot travel trailer with no phone, a pit bull and my dog we brought from PA. Two years from the time we said, ‘I do’ I got pregnant and although we were living the dream (?) and were truly happy, I wanted to move back to Pennsylvania away from the heat, the bugs, and no hills. We moved home and a few months later had a beautiful daughter and first grandchild. Luckily, my parents still loved me. Three years after our return we had daughter number two. Life was good – until it wasn’t.

Getting married at 18 years old sometimes works, but sometimes you feel as though you missed out on things. He definitely felt he had. He was tall, good looking and a good guy. With that list of attributes often comes the ability to attract women – which he did.

After 11 years of marriage with 2 years of counseling tossed in, I realized I no longer wanted to share my husband with other women. I asked for a divorce and became a single mother to two young daughters. It was amicable and we remained good friends and always put our daughters first and never in the middle. I was broken and hollow. I had lost the love of my life.

Life was hard but I don’t necessarily think it shouldn’t be sometimes. I think the hard things you go through in life can make you who you are meant to be. It doesn’t mean it’s easy but through the tough years after the divorce I became a stronger person. I gained respect for myself . More importantly, I think it showed my daughters that they should expect to be treated with respect and love by the person that proclaims to love them.

I don’t take marriage lightly but I do believe if you are more damaged by the person that is supposed to love you forever and you do your best to work on making it work but things don’t change, maybe it’s time to let go so you can continue to grow and love. I have seen too many couples hang in there and they are bitter, sad, angry and so many things I don’t want to be. Life is short. I am here to make mine as happy and filled with love – for myself, my girls, my family, my friends, as I possibly can. Sometimes that means moving on without someone you love.

This story was submitted to Love What Matters by Becky G. Submit your own story here, and be sure to subscribe to our best love stories in our free newsletter here.