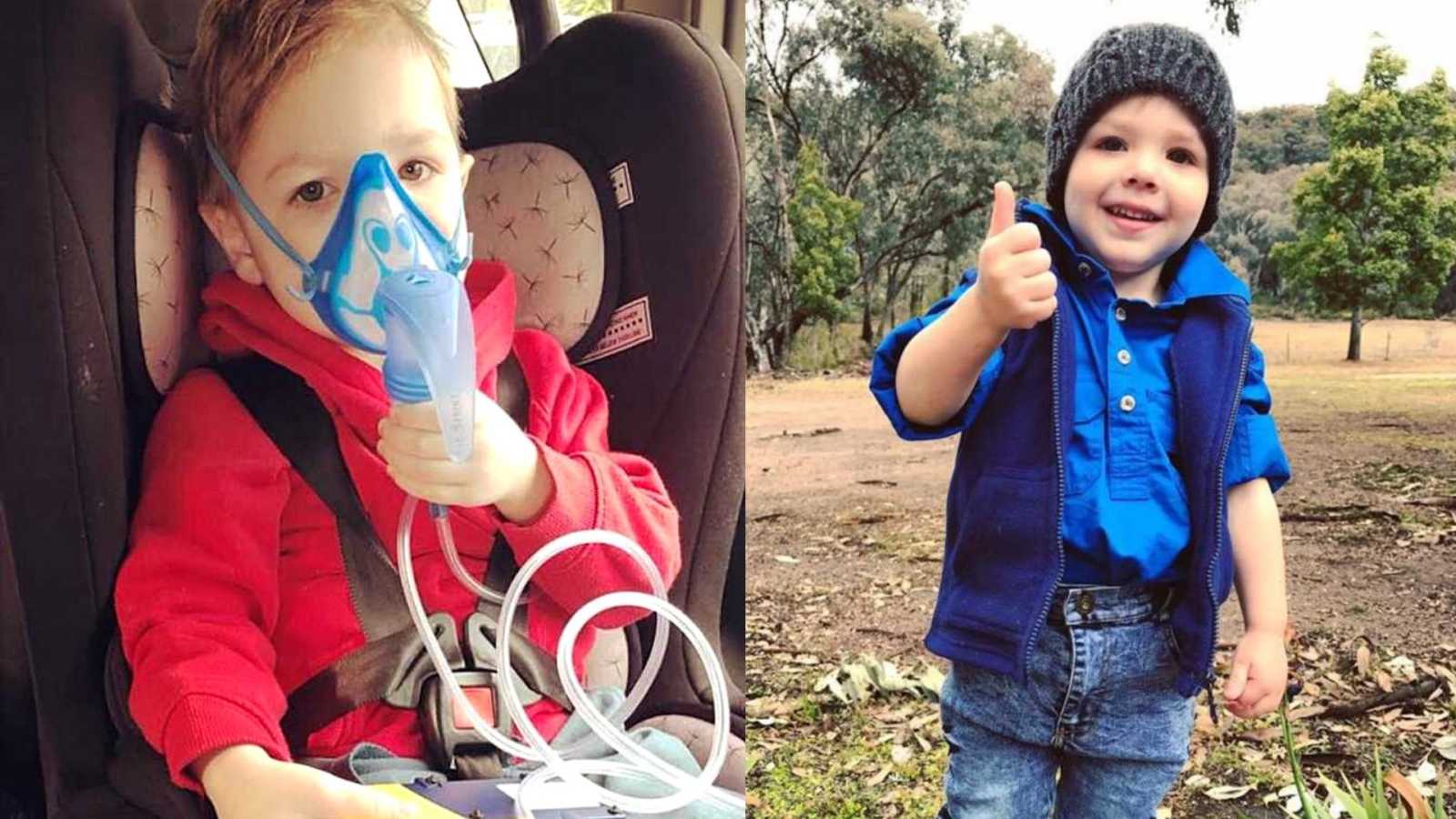 “Mommy am I going to get so sick that I die?’

As these words tumbled from Charlie’s perfect lips, just days before his 4th birthday, my heart broke into a million pieces. It was heart wrenching. All I could do was hold him close as tears ran down my face.

‘I don’t want to have Cystic Fibrosis any more. Can the doctors give me a pill to make it go away so I can feel better?’ Charlie noticed my tears and tightened his little arms around my neck and told me when he was sad, snuggles always made him feel happy and he would snuggle me until my tears went away. So we lay there comforting each other with love. What I wouldn’t give for his biggest worry in life to be a grazed knee or his sandwich cut the wrong way.

I had a routine pregnancy followed by a semi-routine birth at our local hospital in rural New South Wales. Charlie took to feeding within the hour and his first poop was as black as the ace of spades. It was all fairly routine according to the midwives. Off we went home to immerse ourselves in the joy of spending endless hours staring at our bundle of perfection we’d created.

It was only until we received the results from his Heel Prick Test that we were alerted to the condition. It was at a check-up with our GP prior to Charlie’s 6-week immunizations when the doctor casually told me the Heel Prick results had identified a common CF mutation. ‘Only the one though, so probably nothing to worry about. Charlie’s growing nicely and putting on weight. So don’t worry too much. Just a few tests down in Sydney to rule it out.’

Another Heel Prick Test was undertaken and a Sweat Test booked. And after an agonizing two weeks it was confirmed. Charlie was officially diagnosed with Cystic Fibrosis. CF is a progressive genetic disease that primarily affects the lungs because of a malfunction in the exocrine system that’s responsible for producing saliva, sweat, tears and mucus. Lung failure is the major cause of death for someone with CF. What a lot of people don’t realize is CF also causes issues with the digestive system – pancreas, liver, kidneys and intestines. And because there are over 2,000 genetic mutations for CF, people have varying degrees of symptoms and severity.

After our doctor called with the news, I completely and utterly broke down and sobbed uncontrollably for days. With just one phone call I was robbed of the newborn bliss and the darkness of uncertainty set in. I cannot think of a single event that has devastated me more than the night we received the confirmation. In fact, even as I write this now, it still makes me cry. It probably always will.

Even though it’s a genetic condition, no one in either of our families had been diagnosed with CF. The diagnosis was a complete bolt out of the blue. Because Charlie hadn’t shown any of the obvious signs, I spent many a night convincing myself the diagnosis was wrong. I mean doctors mess up test results all the time right? At first the guilt of knowing we passed on the gene for this condition was all consuming. Even though we had no idea we still blamed ourselves. I ended up suffering pretty severe post traumatic stress and ended up on anti-depressants which just turned me into a zombie. I would lay on the bed staring into space and Trav would bring Charlie in for a feed and then take him back to his cot. Charlie fed hourly for days like this while we were working out his medicine dosage while I struggled to come to grips with it. Then one night while cuddling with Charlie he reached up to touch my face and smiled the brightest smile. Right then I knew I had to pull myself through and focus my attention on fighting for him.

Fast forward four years and Charlie is beginning to form connections between his condition, sickness and dying. As a mother all I want to do is take away his pain, but I can’t. Cystic Fibrosis is a relentless condition that requires daily treatments and therapy. Charlie already takes up to 15 pills a day, and that number is growing. There is no remission, no days off, and no cure. It is mentally and physically exhausting on us all. Cystic Fibrosis is something that is always there, it’s always in the back of your mind and you’re continually weighing up all the risks for the mundane everyday things like playing in the garden or socializing at the park. We’re regularly pulling out of plans due to infection control, his preschool often calls up to let me know there’s illness going around and each meal I have to calorie and fat count to work our his medication dose. I’m always listening out for the first signs of illness – a cough or a sniffle – and  wondering just how much damage his little lungs will sustain this time. For some people an illness might creep up slowly and get progressively worse, but Charlie will go down like a ton of bricks. His breathing becomes labored and the mucus in his airways builds so quickly and causes violent coughing fits that cause vomiting. His energy levels drop and he can’t eat or drink anything. His physiotheraphy doubles, sometimes triples, we introduce more antibiotics and if it’s a really bad bug he’ll end up in hospital on IVs.

Charlie’s genetic mutations are the most severe which means the current wonder drugs available to 90% of the CF population, won’t work for him. There are trials in the US for drugs that may help, but it will take quite some time for them to become available in Australia. And while amazing, these drugs aren’t a cure, they’re simply a stopgap, an attempt to halt further deterioration of the lungs while we wait for a cure.

Charlie is my light and my strength, and I hope in return I can instill in him a fierce determination and positive mindset that will get him through his darkest days. He has a beautiful contagious smile and you can’t help but be happy when you’re in his company. Surprisingly he has an energy that some days seems limitless. He’s the kind of kid that smiles and says hello to people as we walk down the street or do the shopping. He loves nothing more than stopping to tell people all about his favorite dinosaurs (T-Rex and the parasaurolophus). His thirst for knowledge is strong and we nurture his inquisitive nature. Cystic Fibrosis has taught us to celebrate the little things and find joy in the everyday.

In his four short years on this earth, he’s been poked and prodded by more doctors than most people will ever experience in their whole lifetime. But despite all he faces, every day he still seems to take it all in his stride.”

This story was submitted to Love What Matters by Cassie Jones. Follow her family on Instagram here. Submit your own story here and be sure to subscribe to our free email newsletter for our best stories, and YouTube for our best videos.

‘Mom, I want to join cross country!’ She looked confused. If your child had a life-threatening disease, you’d hesitate too.’: Runner with cystic fibrosis follows dream, ‘Giving up wasn’t an option’

‘No, this can’t be real. Not this. It isn’t fair! Hasn’t she been through enough?’ But it was real. I heard the words no parent wants to hear.’

‘Our 2-year-old son was completely normal, healthy child. He would trip and fall a lot, but we never thought anything of it. He was not fine, would never be fine, and our life would forever be changed.’

‘I was tired of coughing up blood. People stared at the sick girl carrying the oxygen tank on her back. I had enough!’: Woman with Cystic Fibrosis survives double lung transplant