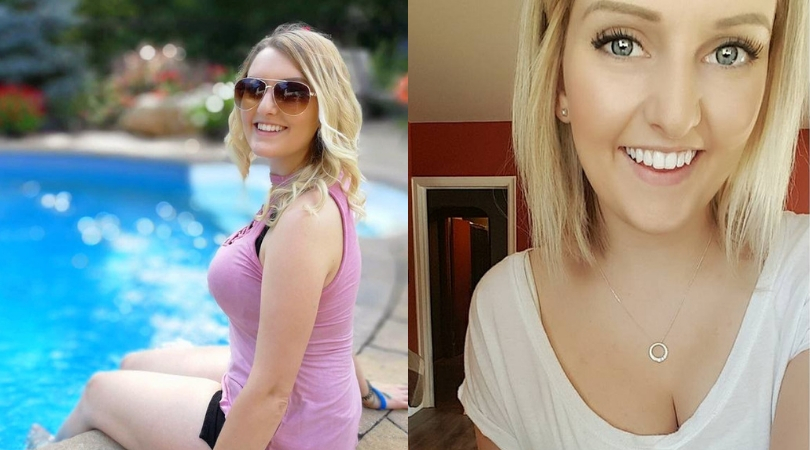 “I met the love of my life when I was just shy of 12 years old. Ever since I could talk, I begged my parents to let me have a dog for every single birthday or holiday. Finally, a week before my 12th birthday, they gave in. We walked into the shelter on a hot June day ‘just to look.’ According to my dad, we were there to ‘get some information’ about dog ownership to see if I could really handle the responsibility. It took but a minute for his mind to change after walking through the shelter doors.

Mindy, better known as Nibby, was the dog no one wanted. And when we walked into the shelter that first day, I didn’t want her either (at first). It was my parents who originally fell in love with her sad eyes and broken heart behind the glass, while I swooned over a Cocker Spaniel puppy named Brownie in the next display. Nibby wasn’t as happy and full of life as the other dogs. She wasn’t wagging her tail at the sight of us, she didn’t bark or jump at the glass. Instead, she cowered in the back corner of her kennel, watching apprehensively. My parents decided to give her a chance, and we went in to meet her.

At just 6 months old, she had already endured so much trauma that the shelter had assigned her her own social worker. She had been adopted out, severely abused, and returned twice in the short month that she was with the shelter. When we finally got to take her home 2 weeks later, it was clear she had some trust and anxiety issues. She wouldn’t come out of her kennel, I had to hand feed her every meal piece by piece, she was so afraid of humans that she couldn’t even bear to look at us. I remember thinking, ‘I thought having a dog was supposed to be fun?’ I remember feeling disappointed I didn’t have a happy, playful, energetic puppy to show off to my friends when they came over. But with hard work and dedication, she slowly came out of her shell, and my, was she ever brilliant.

All the late nights of sleeping on the floor beside her kennel were so worth it once we finally got to see her shine her true colors. Although still anxious and fearful of strangers, she was making strides with me and my family and it was incredible to see her grow past all that had happened to her before us. It wasn’t until I started university that I really started to appreciate the struggles that Nibby had gone through, as I began to go through my own. Diagnosed with Generalized Anxiety Disorder (GAD) and Depression, school was no walk in the park for me. Some days it took everything I had just to will myself out of bed. But every single day, I could be certain of one thing: Nibby would be there, waiting for me and encouraging me in her own way.

I quickly started to find strength in the face of my demons because of her resilience and will to live in the face of her own. She helped me through some incredibly dark days just by being herself. I wish I could explain to her how much that has meant to me.

When it came time for me to move away from home after university, I was ready. I had a brand new, shiny degree that I worked so hard for, I had found someone who I thought was the love of my life, and I had my trusty pup by my side. I packed up and hit the road, driving 17 hours away from anything I had ever know to start a life in a brand new city with my partner, and Nibby. Considering she was already 10 years old at this time, she did incredibly well during the move. Part of me thinks she knew how much I needed her strength in that time as she showed no fear in the face of such a big change.

Things were certainly not easy in the beginning. Money was tight, jobs weren’t easy to find, and again I found myself slipping deeper into my depression and anxiety. For the first year of living away from home, I struggled every day just to get out of bed. Some days it felt like torture to even think about showering, and dragging myself to a meaningless job just to make ends meet. But one thing I could always rely on was the absolute love and dedication of my girl, Nibby. The second year of living away started to look up as I got some help for my mental health and finally worked my way into a wonderful, meaningful job I loved. My partner had finally got into his dream career field and for once, I wasn’t even thinking about the demons of mental illness looming in the shadows.

Things were going really well between my partner and I, and we were about to celebrate our 4th anniversary together, as well as our 2 years of living in our new city. In celebration, I planned an anniversary photoshoot for the three of us, Nibby obviously being the star of the show. We had always talked about having her as a part of our wedding someday, but as she continued to age, we knew that might not be a real possibility. We opted instead to take some meaningful family photos together to celebrate Nibby and our life with her. Ones we could display at our future wedding as a way to include her in the celebration. She was, after all, a walking, barking testament to true love. If she could find it in herself to love humans again and find a zest for life after everything she had been through, then surely anyone could.

It wasn’t until Thanksgiving morning that I was blindsided with an earth-shattering, life-changing conversation. My partner came into the bedroom on Thanksgiving morning carrying Nib, to wake me up just as he had done every single day of our relationship. Only today was different. He looked me in the eyes like he had something important to say and I immediately felt my heart sink into my stomach. He confessed that he was no longer happy, that he hadn’t been for a while, and that he needed to be alone. With no explanation for why or how he was feeling, and no desire to work anything out, he packed a bag and left. I was devastated, crushed. My entire life as I had known it had been flipped upside down in an instant and no matter how hard I tried to get it back, it was gone.

Dealing with this reality has been – and still is- incredibly difficult for me. As quickly as I had felt the demons of mental illness fade away, they were back in full force telling me how unworthy I was of love, how everything was my fault. I couldn’t get out of bed. I seriously thought about dying. I had no supports around me in this new city as any friends I had made in the past 2 years were his. I had never felt so incredibly isolated and alone in my life. For days, Nib was my only reason to keep going. Just as she had shown strength and resilience in all her own battles, she was now showing it to me to help me through mine. She has always been my unwavering source of love, support, and strength in difficult times. Even now, after almost 13 years of life, she’s coming to my rescue again.

When the day of the photoshoot rolled around, there was no doubt in my mind I was going with my Nibby by my side. She was after all, the star of the show in the first place. I decided to make the shoot a testament to her, her resilience in the face of all of life’s challenges, and her ability to love unconditionally despite all the hardship she had been through.

Although she may not be with me forever, these photos and the wonderful memories made will be. In the end, she is my true love story. I recently got her paw print tattooed on my left arm with a semi-colon in the middle as a tribute to all the times she has saved me from my demons. She has gotten me through everything and I know she will continue to do so until her last day. I love you, Nib.”

This story was submitted to Love What Matters by Ally Laflamme, 24, of Ottawa, Ontario. Submit your own story here, and subscribe to our best stories in our free newsletter here.

Read more stories about dogs that have touched their owners’ lives in huge ways:

‘Our eyes met. They were her begging eyes. Eyes that said, ‘Help me Mama.’’

‘We would take her in a heartbeat, we were really hoping no one would come after her.’ I surprised Bob, for his 80th birthday, with the gift of Sloan.

‘We were two girls having fun, or so we thought. We loved each other at 16-years-old.’: Young women fall in love in secret and worry about their love being ‘accepted’

“I was sick of being a secret, as if it was wrong or dirty, as if our love wasn’t acceptable. I returned home to find a sign on my gate door saying, ‘this way to happy ever after.’ I thought nothing of it. Zaynah stood there looking as pretty as a picture with a Build-A-Bear teddy and a rose which said, ‘I Love You, Will You Marry Me?’“