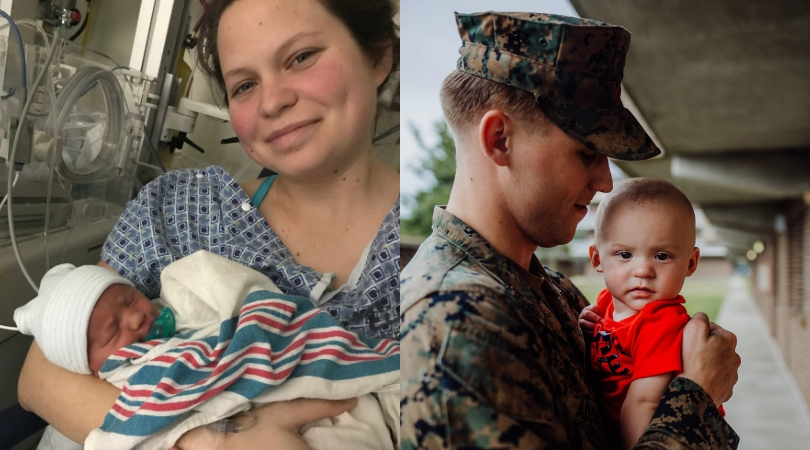 “I got pregnant days after Alex got home from Yuma, Arizona. When I found out, we couldn’t have been more excited. Both of us are big family people; from the beginning of our relationship, both of us couldn’t wait to start our own family. We were so excited, but minutes after telling Alex he was going to be a Dad, we realized I was due a month after he deployed.

Fast forward to January 22nd, it was 5 a.m. and Alex was at work. It was 17 days before Alex deployed. I was 34 weeks and 2 days pregnant… Way too early to have a baby. I immediately called Alex’s cell phone multiple times (37 to be exact) and got no response. Realizing I had limited options, I called Alex’s command because I needed him to be there. I told them my water broke and that he needed to get his butt to the hospital as soon as possible. I finally got a response from Alex and he told me he had to finish PT before he could leave. I think that’s his fastest 3-mile time to this day. I couldn’t wait any longer so I drove myself to the hospital and they told me there was nothing they could do to stop this baby from coming today. We were going to be parents. After 23 hours of labor, they discovered the cord was wrapped around my baby’s neck and within 90 seconds I was in the OR and they delivered my son via emergency C-section. I don’t remember much from when they took me to the ER, but I vividly recall looking at Alex and holding my breath until I heard Barrett’s first cry. Man, what a cry it was.

Because Barrett was so early, he had to go to the NICU because they thought his lungs were underdeveloped. Barrett was taken to the NICU with a CPAP (helped regulate breathing), a feeding tube, and a few more machines hooked up to him. Alex and I visited Barrett in the NICU 8 times a day, averaging 2 hours at a time, for 2 weeks. Every time we had to leave, it took everything in us to not break down and ugly cry, which we often did in the elevators down to our car. Watching your son stop breathing and having to hand him to the nurse to resuscitate him is one of the most heart wrenching experiences. He had a few close calls, but he has been such a strong baby from the beginning, refusing to give up on life. Within 12 hours, Barrett had ripped out the CPAP and feeding tube on his own without the nurses even realizing it. When the nurses told us he had done it himself, we were initially upset, but then those feelings subsided and we realized just how strong and determined he was. The NICU told us not to expect much early on but little did they know he would be full of personality and spunk since day 1.

Barrett was in the NICU for 15 days. Alex left for deployment 17 days after Barrett was born. I tell myself that Barrett came so early because he needed to meet his daddy before he left for half a year. Barrett is a strong-willed baby and he will do whatever it takes to get what he wants, even if that means coming way too soon. Watching Alex leave knowing what he had here at home felt like my heart was physically ripping out of my chest. I have never been an emotional person – but this hit me hard. I cried for days, and not a cute little cry. It was an ugly cry where you can’t breathe and your whole body shakes. Alex has many hats – he is a son, a husband, a Marine, a friend, but his favorite and most treasured hat is father. He might have only been here physically for 17 days, but every day that Alex wasn’t here, Barrett knew who his daddy was.

They are twins, whether it’s how they sleep, or how they give me the side eye, they do everything the exact same. I have been asked so many times if Barrett came out of me or Alex. And if I didn’t have the scar, I would question it myself.

Fast forward 6 months, and it’s the day Barrett gets to meet his Daddy again. I got my husband back. I had dreamed about this day for months and it still didn’t feel like it was real. I remember saying, ‘Oh God. I am about to puke.’ I was so nervous, scared, anxious, and excited all at the same time. It was almost a sensory overload because so many things were changing and so much was going on. Admittedly, I remember calling my best friend and wondering if Alex would love me less because he loved Barrett more. I feel silly now that I even thought that, but it was a realistic fear in my head at the time. Alex was supposed to arrive at noon, then it got pushed back to 1:30 p.m. and then 2:30 p.m. All of a sudden, I see a white van and someone whispers, ‘There he is.’ I saw him and I jumped. I jumped straight into his arms. It was one of the best days of my life.

Raising a baby on my own for 6 months was hard, but I forgot all of the sleepless nights, all of the tears, all of the wondering when Alex was going to come home, all of the unknowns the moment I saw Alex. He makes everything okay. He makes it all worth it.

I had been told multiple times to prepare myself because Barrett wasn’t going to remember Alex. Somehow, Barrett remembered his daddy. Barrett is usually pretty good with strangers, but he reached for Alex when he saw him. And I mean really reached – like he wanted and knew what he was grabbing for. He KNEW who his daddy was. He knew he was supposed to be in his life.

Barrett has no reservations when Alex does anything with him. He loves Alex as much as he loves me, and I love it. Seeing their relationship blossom over the past few weeks has been one the greatest treasures I have witnessed in my life. I would go through those 6 rough months if I could watch them see each other again.

This story was submitted to Love What Matters by Meredith Adams, 24, of Jacksonville, North Carolina. Submit your own story here, and subscribe to our best stories in our free newsletter here. 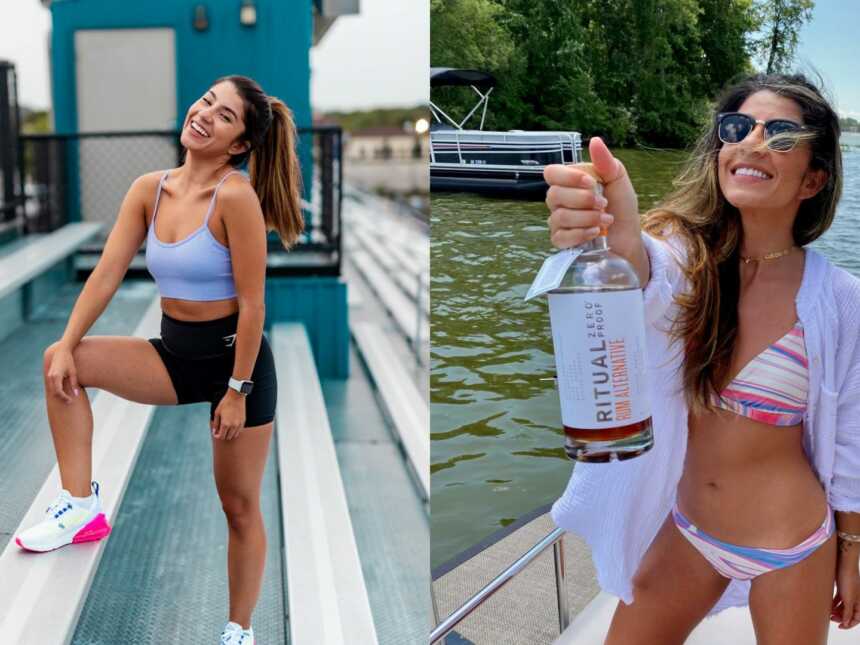