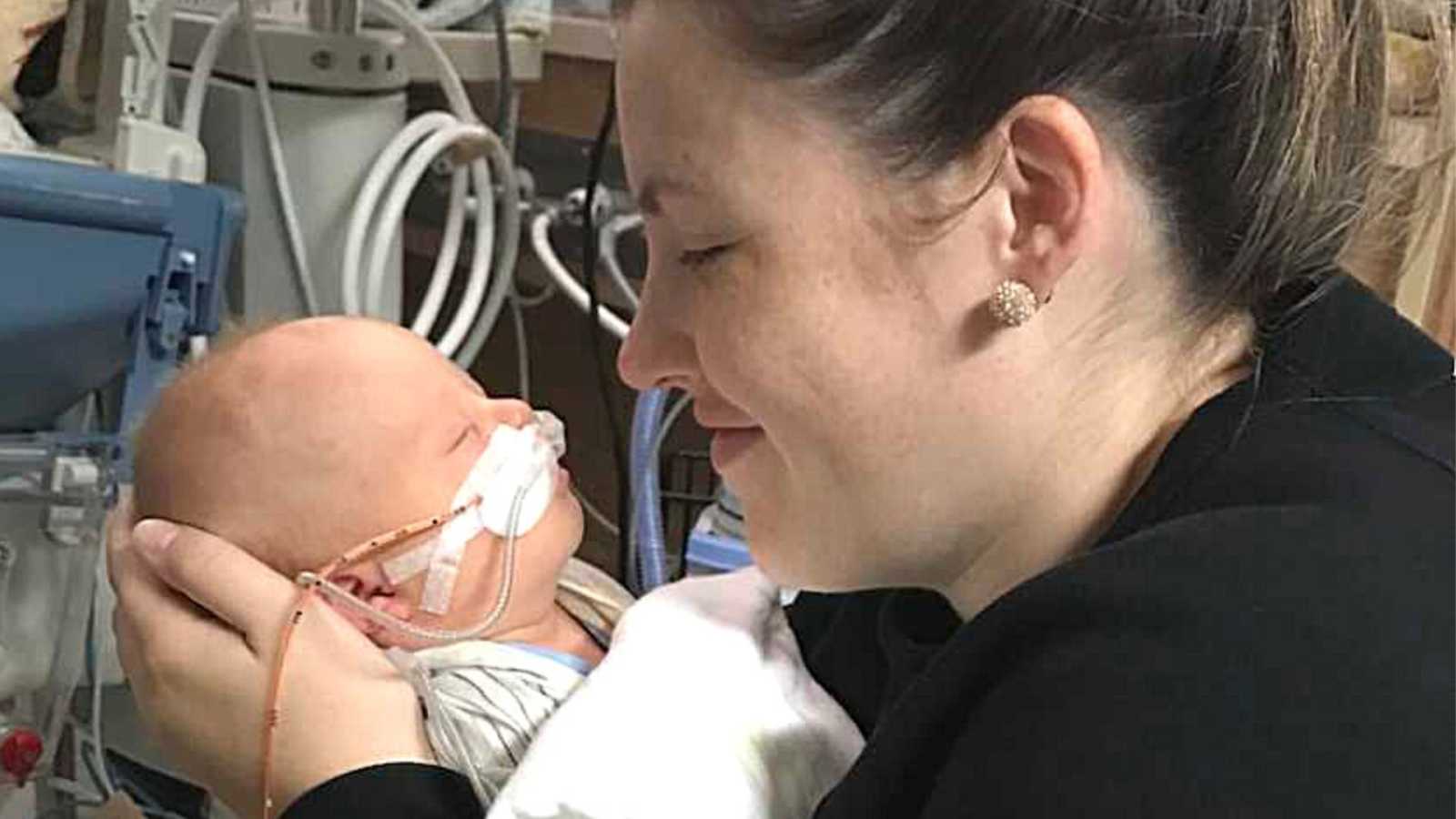 “My memories of the hours after my son Henry was born are foggy. There were a lot of complications following his birth and I lost a substantial amount of blood. I remember seeing a lot of concerned nurses and residents rushing in and out of the delivery room. I remember my husband, mother, and sister staying by my side and assuring me everything was fine. Most of all, I remember wishing I could have just a minute or two of privacy so I could look up the symptoms of Down syndrome.

My pregnancy with Henry had been a wonderfully, uneventful one. My husband and I made the decision early on to forgo any genetic testing, just as we had done with our daughter. We weren’t concerned in the slightest. We had multiple ultrasounds and every single one of them showed a completely healthy baby boy growing within me. I was blissfully unaware of how drastically my life was about to change.

The moment Henry was placed in my arms, I recognized the symptoms of Down syndrome in his face, but in the hustle and bustle of the delivery room, none of the doctors or nurses caring for us seemed to notice the features that I was seeing. His small, low-set ears; his almond-shaped eyes; his single palmar creases; the small tuft of extra skin on the back of his neck. I was filled with an overwhelming sense of fear and denial. All of Henry’s features seemed to hint he did indeed have an extra chromosome, but every medical professional my husband and I approached assured us otherwise. When the family doctor working on the maternity ward came by our room later that day, she mentioned the extra skin at the back of his neck was a bit concerning but reassured us that she didn’t suspect Down syndrome. I asked multiple nurses for their opinion, but all of them told me he didn’t look like other babies they had seen who had it.

I am ashamed to admit the first 36 hours of my son’s life were some of the worst of mine. I knew there were issues with his health, but I didn’t feel confident enough to advocate for him as I should have. I wanted to turn back the clock and return back to my normal life. In that hospital room, it felt as though nothing would ever feel normal again. Rather than the happiness and love that typically surrounds newborns, Henry was shrouded in uncertainty. I felt completely lost. It was as though I was adrift at sea, waiting for someone to throw me a life vest and bring me back to some sort of reality. That life vest finally arrived a day and a half after he was born – in the form of a NICU resident named Natasha.

After we noticed Henry was having some difficulty breathing, the NICU team was finally paged to come and assess him. The moment Natasha walked into the room, she began pointing out all of the features that had brought such fear to my heart. I asked if she thought he had Down syndrome, and I will never forget her answer. She said, ‘I don’t know. But I do know that your little boy is going to run. He’s going to play. He’s going to have a fantastic life. Isn’t that what really matters?’ Natasha gave me the reality check I needed to begin to accept that life would be different, but in no way would it be bad. Her words to me on that day shaped the way I have handled every obstacle that has come our way since.

Henry was clinically diagnosed with Down syndrome shortly after my conversation with Natasha. Two days later, we got another huge shock when he was diagnosed with a heart defect that would require open-heart surgery to correct. While Henry was in the NICU, it was hard to see him as anything but a sick child. He was hooked up to so many monitors and machines that constantly beeped and sounded alarms. The sounds and sights around me each time we went to spend a few hours with him were distracting, overwhelming, and terrifying to a worried mother. Henry was released from the NICU after 9 long days and nights. Without all of those monitors and machines, I was finally able to see him for what he truly was… a regular baby. I expected things to feel different bringing home a special needs child than they did bringing home my daughter, but that just wasn’t the case. Sure, we had a few more appointments, but all in all, life felt absolutely wonderful from the moment we stepped out of the hospital with Henry for the first time. Things continued that way for the next five and a half months until I got the call that Henry’s open-heart surgery had been scheduled.

Open-heart surgery isn’t something any parent looks forward to for their child, but I was excited to put this hurdle behind us. Everyone I spoke to about the procedure assured me it would go incredibly well, that he would heal very quickly, and he would be home in a matter of days. That’s almost always the case with heart surgery in children. Almost always. Unfortunately, it wasn’t for Henry. Henry’s surgery went incredibly well, but there were a number of complications as he began his recovery. He was incredibly difficult to sedate and kept waking up. His blood pressure kept dropping. Scariest of all, his heart kept stopping. The hardworking doctors and nurses caring for him had to perform chest compressions three separate times. I was there for two of the incidents, and it’s the worst thing I’ve ever been through. Sitting on an uncomfortable couch in the corner of a hospital room as a team of people I barely knew worked to bring my son back to life was a feeling I can’t even begin to describe. It was helplessness on steroids. I would have given anything to trade places with him and take on everything he was going through.

Henry is a fighter, and he rallied like only the bravest of warriors can. One week after his final cardiac arrest, he was moved out of the ICU, and a week after that, we were finally on our way back home.

Henry is now a happy, healthy 8-month-old. I’ve come to realize something magical has been taking place since the moment this little boy was first placed on my chest. Life doesn’t feel normal anymore; at least not the normal I mourned in that hospital bed in the hours after he was born. I appreciate and celebrate the little things a lot more than I used to. I worry less about what others think. I’ve found the courage to advocate for those I love. I’ve built an incredibly close circle of people I know I can rely on when things get tough. Life doesn’t feel normal anymore. It’s better than normal. The only difference between ordinary and extraordinary is a little something extra, and a boy with three copies of the 21st chromosome has brought the perfect amount of extra to my life.

Becoming a mother to a special needs child has motivated and inspired me in a way nothing else ever has. Henry has started a fire within me to advocate for him and anyone else who has been labeled as different. I will spend the rest of my life shouting his worth from the rooftops, and I am so excited for the day he is standing right there beside me, shouting for himself.”

This story was submitted to Love What Matters by Brittany Caffet from Warman, Saskatchewan, Canada. You can follow their journey on Instagram. Do you have a similar experience? We’d like to hear your important journey. Submit your own story here. Be sure to subscribe to our free email newsletter for our best stories, and YouTube for our best videos.

‘What are we supposed to do?’ It must be my fault. I turned to Google for answers and was terrified.’: Mom has surprise Down syndrome baby, ‘Life looks a lot different now than it did 5 years ago’

‘The nurse handed my daughter back. I instantly noticed her teeny tiny ears. ‘Do you think she has IT?’ I looked at my husband in fear.’: Mom of 3 births baby with down syndrome, ‘She is the most amazing human being I’ve ever met’