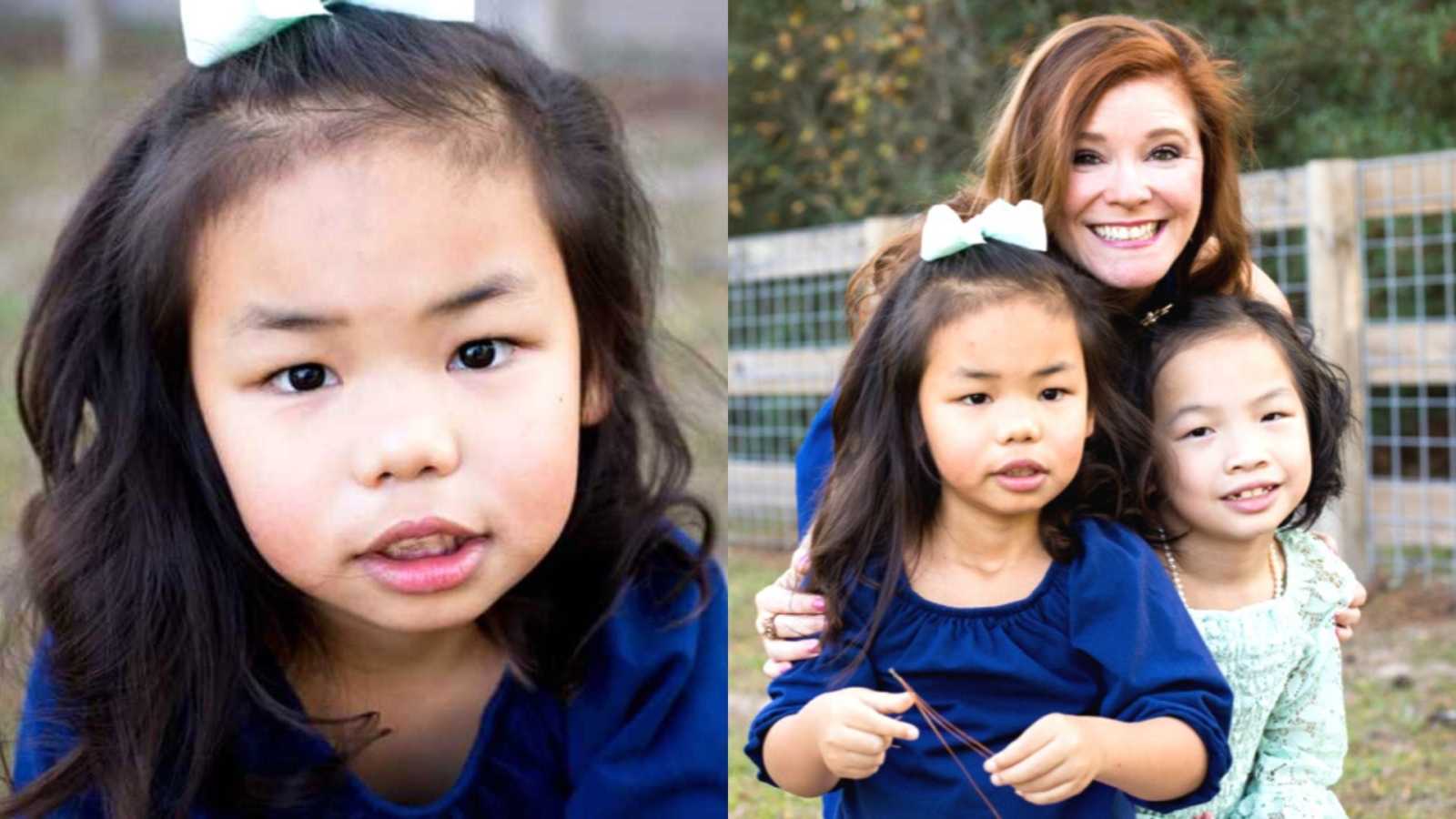 “My husband and I started discussing adoption back in 2011, about a year after we were married.  I can’t describe it, but I always had this inkling my route to motherhood would be founded in an untraditional fashion. From an early age, I knew adoption was on my heart. Lucky for me, my husband was on board from the start.

In August of 2016, we were sitting on the back porch of our home, in our mid-30s and still ‘not ready.’ We looked at each other and I told my husband, ‘I feel like our daughter is alive, we just have to get to her.’ He said, ‘Then what are we waiting for?’ We started the process less than a month later.

We knew China adoption was on our hearts. We know there are many ways to adopt and no one way is ‘right.’ There’s a program that fits the needs of every family and China was our fit.  We started with an account on rainbow kids, browsing profiles, having no idea what we were doing. On a day in October 2016, I saw a little face that made my heart go pitter-patter. Unfortunately, a lot of people felt the same and since we were NEW to the process, we weren’t considered. But this was the push we needed. We signed with our first adoption agency in late November 2016.

I was looking at the profiles of ‘waiting children’ almost daily. We decided from the start the LID route with China adoption wasn’t for us. We were open to children with needs and we knew we would ultimately complete the process ‘child-led,’ meaning we saw our child and then moved forward.

And that’s exactly what happened. When I saw our sweet Meili’s face, I was sure. My husband was a little nervous because she was older than we had envisioned, but I knew. And the day before Christmas, we said yes. It took 5 excruciating days to get the yes from our agency given the holiday, but on December 28, 2016, we were preapproved to adopt Meili.

The next few months were a flurry of home studies. I pushed the envelope with time in every way possible. I figured one day wasted was one day less with her. We traveled to China in August of 2017, and on August 28, 8 months after our preapproval day, she was in our arms. And the journey began.

Meili’s needs were nothing like we expected. She was way smaller than we thought, a whopping 22 pounds at age 3.5. We were told she had hearing issues, but we knew on day one, she could hear. But she was so incredibly delayed she mimicked a 6-month-old more than a toddler. As a mama, I was scared and nervous. In my heart, I knew what we were in for. I have a degree in Human Development and had worked in the therapy field out of college.

In November, after 7 weeks of hearing tests and other assessments, a surly neurology resident uttered the word, ‘autistic.’ My initial response was to fight. Honestly, he said it with such a lack of empathy, I wanted to hit him. He labeled her ‘severe and said, ‘Some ABA therapy is your best hope for her to have any sense of normalcy. You should prepare for lifelong care.’

I spiraled. I was inconsolable. I internalized it all. Over the next few weeks, I cried, I drank, I didn’t tell family or friends. My husband and I walked around in a bit of a daze, until one day I just decided.

This beautiful little girl didn’t need a mama paralyzed with fear. She needed a mama who was ready to take action. And action I took. We started with speech therapy. We did OT and PT as well, and we committed to giving her some time to maybe ‘catch up.’

All the while, another adoption was looming in our minds. The journey to Lienna is a long one.  We initially tried to adopt a little boy who had been in Meili’s foster home, but that fell through, breaking my heart into pieces just days after we moved in haste to be able to start a home study and race to him.

As we enrolled Meili in her first ABA program, we were doing home study #2 in earnest and enrolled in the Hong Kong adoption program, which is similar to China’s but has different structures and pathways.

The best way I can describe our second adoption is we were constantly trying to go through doors God was shutting. Slamming sometimes, in our face. Meili was doing well. ABA was a life changer for her, and she began to emerge with skills and receptive language. She was flourishing, and our adoption journey was floundering. By April of 2019, we had been at a complete standstill for 6 months. I tearfully told my husband one Friday, ‘We need to change directions.’ God had told me we were in the wrong spot, and for once, I was smart enough to listen. And then there was Lienna.

Way back in 2017, when we were in process with Meili, I had seen Lienna’s face. I even commented on her photo if I could adopt two at once, she would be our girl. Lo and behold, 2 years later, she still waited.

I was nervous about her needs. She didn’t walk but had a type of cerebral palsy where mobility could be worked for. After a friend of a friend reviewed her file, we pressed go. And in a flurry of activity, we rushed to her and she was in our arms in 5 short months.

The best way I can describe Lienna and Meili is they just fit. Two pieces of a puzzle that work together. Our post-adoption journey with her was going amazingly well. Except for a short stint where she hated my husband, she warmed to us easily. She picked up the language lightning-fast and made herself at home in our family like she had always been there.

But the pandemic… I’ve joked that ‘GLOBAL PANDEMIC’ was not on our post-adoption bingo card, but here we are.

Not 2 weeks after we got Lienna settled in kindergarten, ready to learn and make friends, the world shut down. My husband started working from home. We chose to take Meili out of ABA because we didn’t have enough info to feel safe at the time. And although that period of 7 weeks with all of us in each other’s business 24/7 was great for the girls’ attachment, it strained ours for certain.

Lienna went from having a mama that was her mama to a mama who was also her physical therapist, teacher, doctor (telehealth is NO picnic), and all the things. And that’s been hard. She resented not being able to go to school, and we still have been unable to get specialists to assist her when she needs them. I’ve often worried our window to learn to walk was closing because of the lack of services we could get this year. That’s a very real fear.

I sit here today, and I can’t tell you what life will look like for us in 2 to 3 to 5 years. We know Meili will likely be with us forever. At age 6.5, she was potty trained but still non-verbal and much on a 36-month level. Lienna is getting stronger by the week, but we are open to the fact our two-story home may not be suitable once she gets bigger. I have difficulty carrying her around these days. Her long legs are almost as long as mine (I’m 4’10” so that’s not hard).

But we wouldn’t change it. With both girls that are so uniquely ours, it’s truly God’s work. Our days are long, but the years are short. I often find myself tired but then cry when I see how big they’ve gotten. We need breaks regularly, and we are lucky to have worked to build a better tribe of people this year to help us out so we can recharge.

Meeting Meili changed our lives. I became a mama in a 20-story, smoky office building in China. How we were led to Lienna was nothing short of a miracle. All the obstacles we traversed allowed us to meet the little girl that rounded out our family.

People often ask us if we are ‘done.’  And for me, I think we are. But you never know. For now, our family is complete, and we wouldn’t have it any other way.”

This story was submitted to Love What Matters by Lacy Shea Healey from Magnolia, TX. You can follow her journey on Instagram. Do you have a similar experience? We’d like to hear your important journey. Submit your own story here. Be sure to subscribe to our free email newsletter for our best stories, and YouTube for our best videos.

‘Look, it’s your mom and dad!’ Our hearts exploded. A wild and grand new adventure began.’: Mom shares the ‘unknowns’ of adoption, ‘I’d choose it all again’

‘The feeling you know for a fact your child is out there on the other side of the world, is something I just can’t describe.’: Single woman details Indian adoption journey during COVID-19