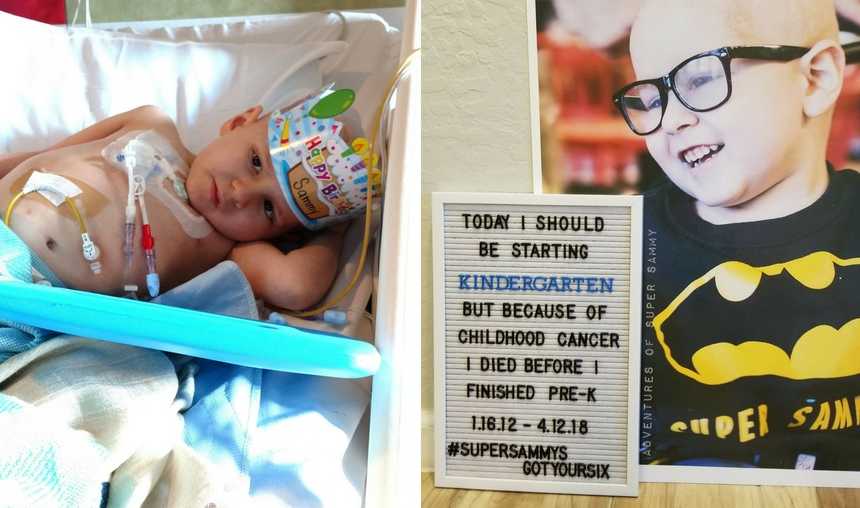 Three years ago, Sammy entered preschool. We got one good year of preschool, one year of school memories. He had autism, so we had a plan in place for 3 years of preschool to help him prepare for kindergarten. Five weeks into his second year of preschool, on October 19, 2016, our son Sammy, at 4 years old, was diagnosed with brain cancer. Medulloblastoma.

He spent 246 days in the hospital, being discharged June 22, 2017. He returned to preschool last fall, only to relapse 2 weeks into the school year on September 1, 2017, to a terminal diagnosis. He attended school as often as possible, which was not often at all. He maybe attended 30 days total last school year. He passed on April 12, 2018. Six weeks before graduating PreK. Sammy is forever 6 years old. We have a lifetime of missed milestones to remember ahead. And we pray our friends and family help us through them.

If you know a family like ours, celebrate them. Let them know you remember their child. They want to hear their child’s name. Send them a note. Donate in honor of their child and let them know. Help them capture their should-be memory, as hard as it is, because they may want to celebrate it. For us, this moment is the first day we were supposed to let our child fly on his own. Kindergarten. And it never came, it will never come for him.

Sammy was diagnosed a brain tumor after I brought him into the ER for vomiting and balance concerns. We were soon told our son has cancer. On October 21st, he endured a 10-hour brain surgery to remove the tumor. It was confirmed that Sammy had medulloblastoma.

While the resection was considered a success, the surgery caused posterior fossa syndrome. This syndrome left Sammy without almost all of his abilities. He could no longer talk, hold his head up, control his eye movements, walk, sit, squeeze a hand, swallow, or chew. Over time Sammy made some recovery from this syndrome, but he never fully recovered.

Following treatment Sammy spent a month in inpatient rehab, working on recovering from posterior fossa syndrome and relearning many skills. During this time, Sammy had his first post treatment scan, which came up clear. No Evidence of Disease (NED). Sammy was finally discharged on June 22nd, 2017, after spending 246 consecutive nights inpatient at the hospital. Sammy was finally HOME! While being home was very different, as he faced numerous challenges, we were thrilled to get back to our new normal of life. Sammy had an intense schedule. 10 plus hours of therapy a week, between PT, OT, Speech and Feeding therapy. Sammy now used a wheelchair, while relearning how to walk. He suffered a mild hearing loss, caused by the chemotherapy drugs. He also suffered vision trouble.

On September 1st, 2017, we brought Sammy into the ER for vomiting and being a bit off from his normal self. They took a quick MRI of his brain to check the fluid level in his brain, and sadly saw something that was potentially concerning. They ended up putting him under to have a full head and spinal MRI. Our worst fears became a reality.

Sammy’s cancer was back. It is not all a solid mass, as was his initial tumor. Surgery was not an option. His options were few, and not what we wanted to hear. The reality was there is NO cure. The chance of our child surviving childhood would take a miracle.

Following this initial relapse diagnosis, our family took a pause. We left all things cancer, therapy and hospital, and went to Disneyland to celebrate life. We had family fly in to join us to celebrate Sammy. To make memories and enjoy life. We wanted to do something for us, in the midst of our storm. Before taking on whatever was next.

On September 18, 2017, Sammy started full cranial spinal Proton Radiation Treatments. He endured 5 days of radiation treatments a week for 6 weeks. Each time, requiring him to be put under. His hair fell out again. His skin burned from the radiation. But radiation helped. Sammy was able to be weaned off the steroid he was on, that was helping reduce swelling around growths in his spine. On October 26th, 2017, Sammy got his last dose of radiation.

On January 9th, Sammy had an MRI. God gave us a miracle. While his scan was not considered clear, it was the best we could have hoped for given the situation. He had NO masses showing on the scan. Just some areas of concern. We now had options, where initially our options were very bleak. He had a lumbar puncture as well, which showed that he had cancer cells in his spinal fluid. Even if the test came back negative, we were to assume he still had cancer cells present. We know we still had a battle ahead. After much discussion, we decided to move forward with an outpatient chemotherapy protocol. Sammy started this chemotherapy on February 5th.

Sadly, Sammy was only able to receive one round of this outpatient chemotherapy, as he endured some complications due to the lumbar puncture and his hydrocephalus. On February 8th, 2018, he was diagnosed with negative pressure hydrocephalus. It is a very rare disorder that is honestly not really understood. On March 20th, 2018, we decided as a family to stop all interventions and treatment and to just enjoy what little time we had left with Sammy. Without being able to continue with treatment of chemotherapy, his cancer was regrouping and returning. We did what we knew was best for our son, and what we knew he wanted. And that was to be home. We honored his wish, as long as we could manage him on our own with home hospice nursing visits, but unfortunately, we were unable to get 24-hour home care for him. On Easter day, we decided to take him to Ryan House, a pediatric hospice care facility, for his end of life care. We spent the next 12 days surrounding him in love, with visits from many who love him.

On April 12th, 2018, at 6 years old, surrounded by the love of many and in the arms of his mother, Sammy took his last breath and went home to heaven.

I was hard pressed for words earlier this week. It was hard to breathe as I processed the moments that passed. I sat in tears as I assembled the letter board marking this big missed milestone. Arranging and rearranging the letters. Wondering if I should mark this day. But it is an important day. And I finally found the words to share.”

This story was submitted to Love What Matters by Kristen Puma. You can learn more about her son Sammy on their website. Submit your story here, and subscribe to our best stories in our free newsletter here. 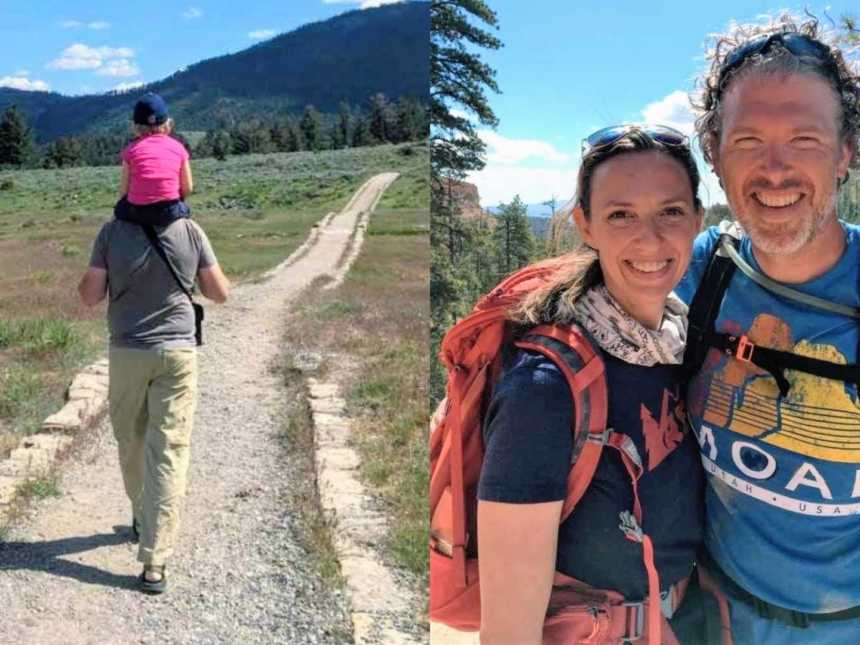 “There was an ache in my chest as I waited for his return. My experienced hiker, my beloved husband, wasn’t answering my calls or texts. All of this life we loved together vanished in a moment.” 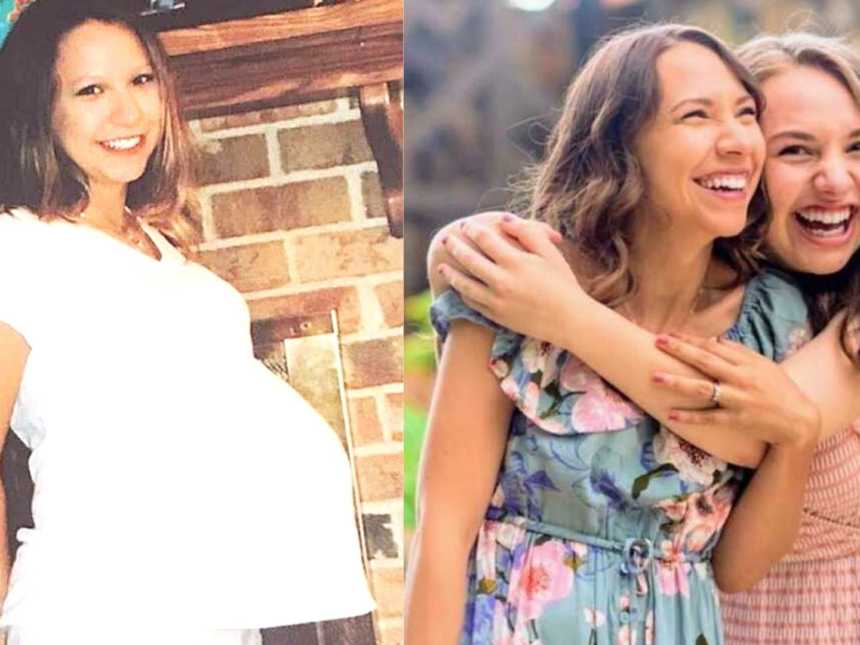 ‘I was only 16. I brought my stuffed Eeyore for comfort, a child giving birth to another child. I wanted different for her.’: Mom shares open adoption story, ‘Our families are bound together’

“I saw how her life would look: a single mom constantly working, wishing to provide nicer things, and a little girl wondering why her father didn’t want to be around. Then, the veil lifted. Both myself and the birth parents could complete her life’s ‘puzzle.’”

‘My therapist said it might be a good idea to hire a ‘personal assistant.’ I’m a stay-at-home-mom. Am I crazy to consider it?’: Mother recalls how extra help would get her ‘sparkle’ back

“I was at brunch slurping up a delectable chai with a girlfriend when I confessed all my help. ‘So, I have this gal who does our house’s big deep cleans and then another gal who does light tidying and takes care of all the laundry a few times a week and this other gal who babysits one day a week during the afterschool hours to give me a break from, well, the after school hours.’ P.S. I’m a stay-at-home mom.”

‘A sleeveless shirt would ‘bring too much attention.’ Everything I did was a ‘sin.’ There was no escaping it.’: Woman overcomes ‘unique’ childhood, trauma to find self-love

“I was in his bed, having unprotected sex. I lost my virginity. I was supposed to wait till marriage. Within 3 months of meeting him, I got pregnant. I came home and caught him talking to another woman. I felt betrayed, heartbroken, and utterly lost. I convinced myself to do whatever I had to do to create a life with this man. Boy, was I wrong. That’s when a girlfriend set me up on a blind date with a man named Larry.”