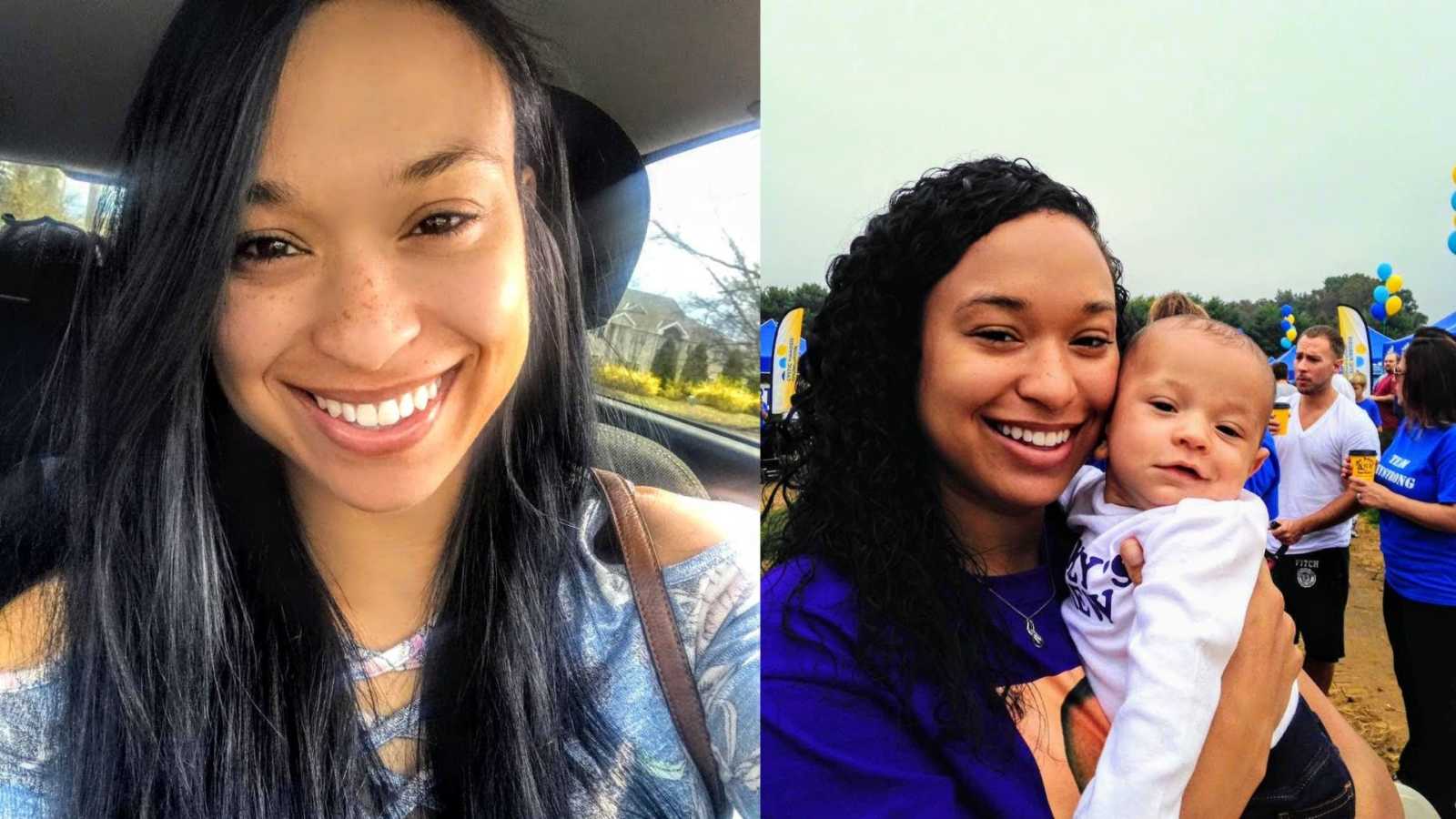 “30. An age where most are beginning to feel comfortably established, some are getting married or have already been married. I got divorced at the age of 26, now at 30-years-old I am a completely single parent, my son is 5-years-old and I am the only parent he knows. I often feel very isolated and embarrassed because of my past and current situation. My life is so different from the average single 30-year-old female. Most people know I am a single mom, but a lot don’t know the story behind it. I wanted to tell this story because If you feel like you are struggling and will never get out of this mess, believe that you can, I never thought my life would get better. It’s taken a long time and I am still not there, but I have more hope than ever before thanks to my beautiful son.

Everyone wants that Prince Charming, the one who will sweep you off your feet. That’s what I thought I found when I met my son’s father. He was so full of wit and charm and loved by everyone. I knew he had a criminal and drug addiction history but at the time he was clean (on probation) and had a decent job so I thought everyone deserved a second chance. Somehow, I quickly found myself head over heels and got pregnant within a few short months of our relationship. He actually told me he wanted to have a baby and the young, naive me agreed.

I never thought I’d be the one to end up in a relationship with an addict. I knew nothing about drugs, those in my friend’s circle as a teen weren’t into drugs either. The only time I had experience with an addict was through being a nurse and not in a personal relationship. It was a very foreign concept to me, and little did I know it was something that was going to flip my whole world upside down. Over the next few months things started to change very rapidly, and I just couldn’t keep up. I could tell something was wrong, but I probably was just ignoring the signs. I wouldn’t hear from him or see him for days and I was just so – lost.

My family told me he was probably using again but I tried my best to believe they were wrong. ‘There’s no way this is happening, we’re about to build a family’ is how I would try and reassure myself. One night I found a cigarette carton full of empty little bags. They were right. I was having a baby by a raging addict and there was no turning back. I used to beg him to stop and he always reassured me he would. He always said he was going to clean up his act, but it only got worse and worse as the birth of our son neared. I dealt with my possessions being stolen or sold, even our new baby gifts pawned, my hard-earned money taken from me, lies upon lies. I would see him post Craigslist ads related to drugs and promiscuous acts and that’s the only way I knew he was still alive sometimes. There was no believing which end was up anymore. I tried to hide a lot of the pain I was going through from my family and friends. I was trying to prepare for a new baby, I had the nursery all put together, and some nights I would go in there, put on some lullaby music, sit in the rocking chair and rub my belly and just sob. How could my life have possibly turned into this nightmare? My parents raised me well to have a good life and somehow, I felt like I let them down and my world was crashing down.

Delivery day finally came, and I ended up having an emergency C section. My son was born at 12:01 AM July 2, 2013. As if that experience wasn’t scary enough, he left me alone that night. My sister stayed overnight with me that night in the hospital and for that I am forever grateful. My ex-husband left after my surgery saying he was told to go ‘rest’ although we all know it was to go use. I brought my little bundle of joy home and I couldn’t have been happier! My son and I started staying with my mom almost immediately to have some safety and security and help for me too.

July 15, 2013, I got a call from the pediatrician saying we need to discuss newborn screening results. I was told my baby tested positive for cystic fibrosis. CF is a lifelong progressive disease that causes the mucous in the body to be thicker and stickier which affects mainly the lungs and digestive system. There is no cure. My heart absolutely sank. I knew a little bit about the disease from nursing school, I also had turned down testing for CF while pregnant because I knew it was genetic and that I had no family history. Within a week his sweat test was done, which is the ‘gold standard’ for cystic fibrosis diagnosis, which came back positive as expected. I began to think, ‘Why me? Why my son?’ A friend of mine had said ‘God gives his toughest battles to his strongest warriors’ and it couldn’t have been more true, especially at that time. I felt my life was in shambles. I had no money, no home of my own (now in my Mom’s house), no father for my son, and now my child is diagnosed with a life-threatening illness. Not only did I have the worries of a new mom, now I am bombarded with the worries of trying to do everything I can to make sure my child doesn’t get sick—being afraid of germs everywhere, not wanting him to touch anything for fear of bacteria, so many thoughts a new mom shouldn’t have. Another worry was I knew I was going to be raising my son as a completely single mom. My ex ended up going to jail, would go in and out over the last few years and is currently there now. My son doesn’t know who his father is.

Having a child with a chronic illness such as cystic fibrosis can be very physically and mentally exhausting especially for a single parent, but it has shown me I am stronger than I could have ever imagined. It also shows me how incredibly strong and resilient my son is. He does breathing treatments twice a day every day, up to four times a day when sick. He uses a vest that shakes him up to clear the mucous in his lungs twice a day every day, and up to four times a day when sick as well. He takes 28+ pills a day to help absorb nutrients in his food, multiple vitamin supplements, nasal sprays, two stomach acid reducing medicines, and boy is he such a happy child. He is very active and energetic, most would never know he had a serious illness. 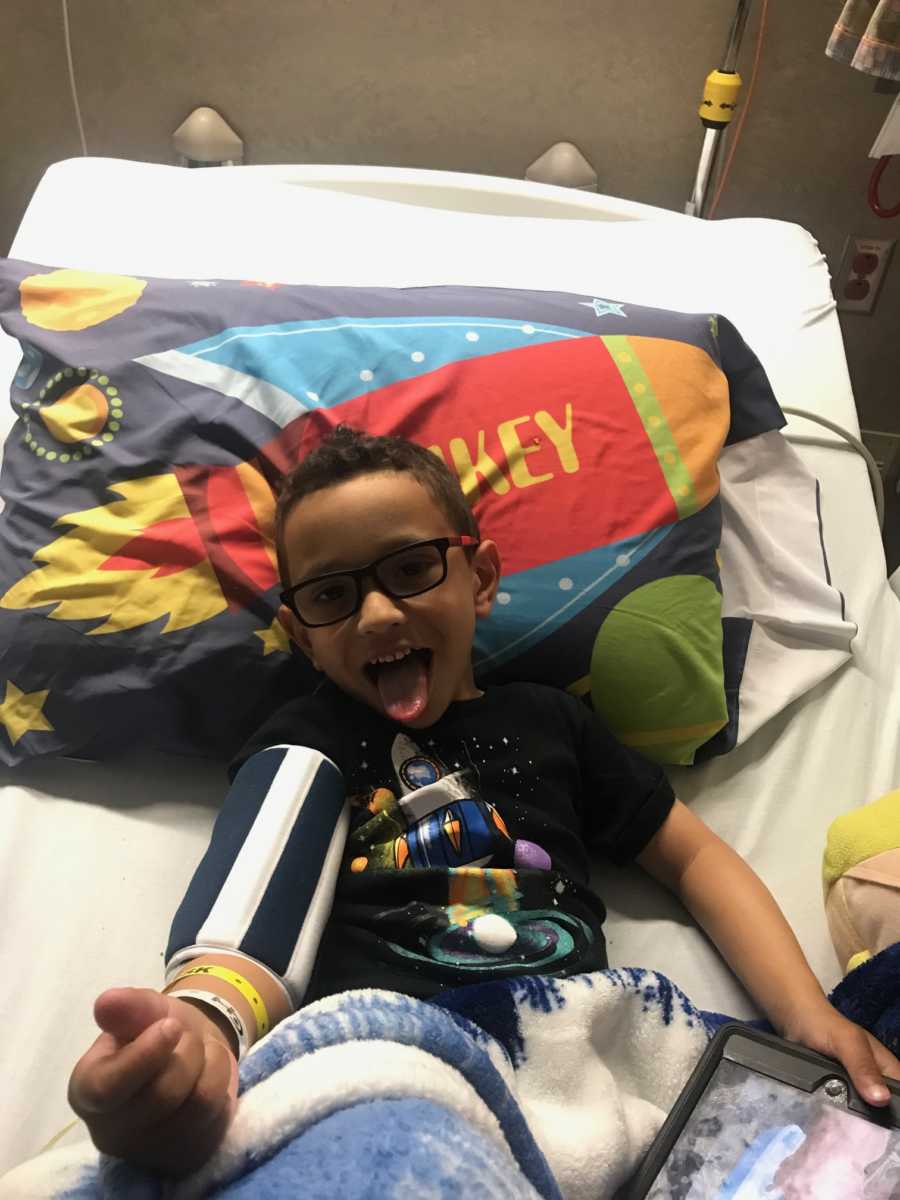 I know I was chosen to be his momma because I care for him better than anyone else ever could. I love him more than I knew I could ever love someone. We are each other’s best friends. He doesn’t know that he is exactly what I needed in my life to get me through the pain I endured. He gives me the strength to continue fighting through my difficult times because there sure have been many. I have 3 nursing jobs to try and make ends meet and it still is never enough because of my student loan debt. I try and give my boy the best life possible. I am often questioned why I do so much and leave no time for myself, or why I spoil him. This little boy needs me and thinks I am a super hero and I’m going to do my best to live up to that expectation. If I am able to be there for him, get him things he loves, I will. I often encourage people to put themselves in my shoes and see how they would handle things if they were me. Take their husband out of the equation, give their child a serious chronic illness and honestly, I think their style of parenting may change a little too.

The things I have gone through over the last 6 years often seem like a terrible dream. I’m finally starting to wake up from that dream and seeing that my life won’t be a mess forever. My son depends on me and I refuse to let him down. We will fight cystic fibrosis together until there is a cure. It’s no longer ‘why us.’ We embrace all of it. I will continue working hard every single night and day to make his dreams come true.”