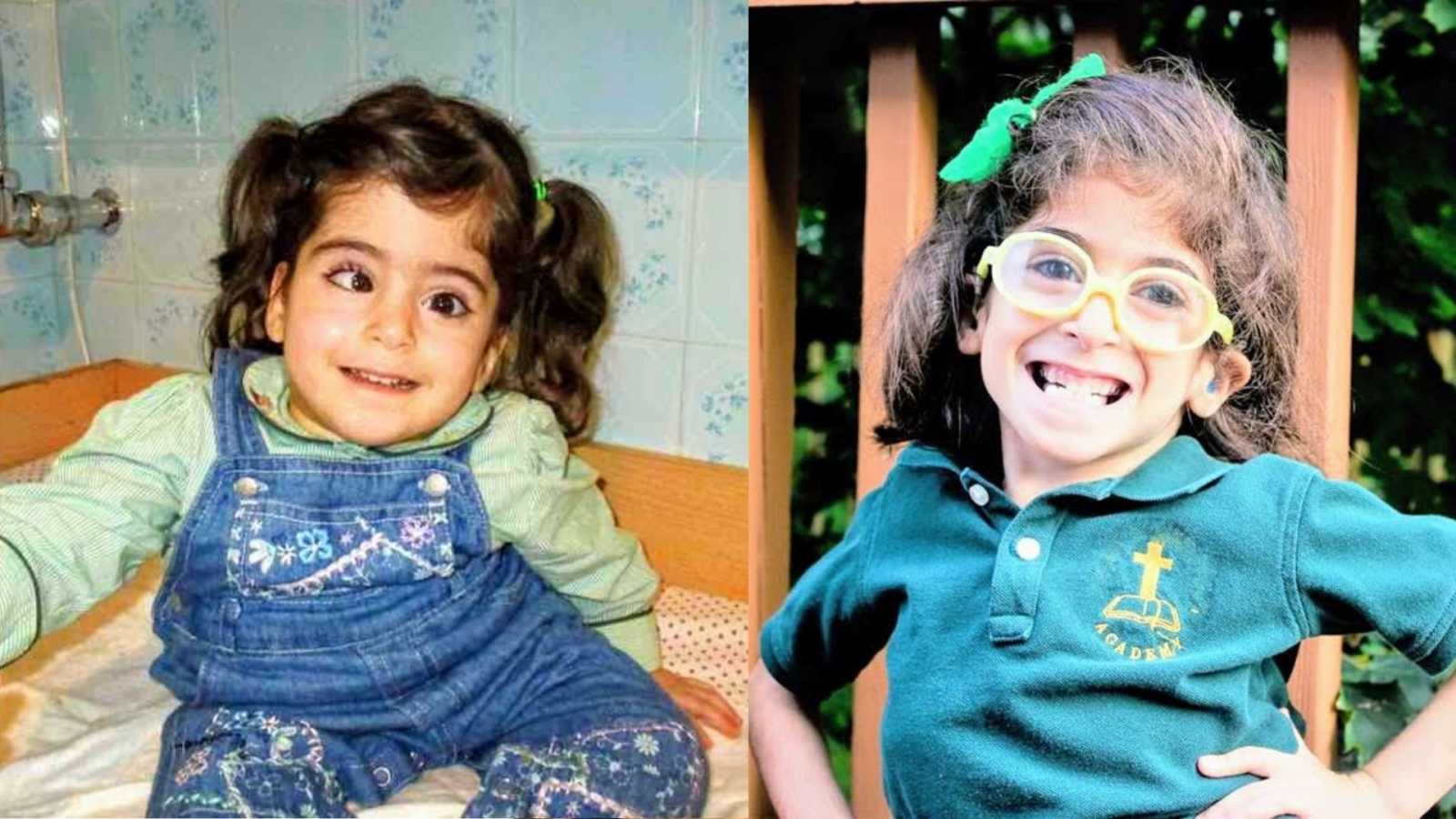 “As soon as Guyana saw the nuns, she lunged toward them from my arms. ‘I’m so hungry and thirsty!’ she squeaked in Armenian. ‘Will you feed me?’ They hustled her away to the room where my new daughter had spent nearly all of her first five years.

And I sat down on the orphanage couch and absolutely lost it, sobs shaking my hadn’t-eaten-in-several-days body. Had I just made the biggest mistake of my life?

I had been raised in a foster and adoptive family. From the moment I lay my eyes on my first foster brother, I felt something stir deep within me. ‘This is going to be your life,’ it seemed to say, ‘and it’s going to be good.’ We eventually adopted my two sisters from foster care, giving me a firsthand look at the painfully beautiful process of artificially grafting new limbs onto one’s family tree.

After I married, my husband Nickolas and I often spoke about adoption. We eventually had three babies before the Air Force sent us to Europe. Thousands of miles and an ocean away from any family, my longing to mother another child intensified. Looking back now, it makes sense. I was separated from my own parents, and even though I was a grown woman with a great marriage, a satisfying job, and three ridiculously attractive children, my empathic heart naively wanted to erase the pain of a mystery child missing his or her own parents.

Then a friend posted about the living conditions of children with disabilities in Eastern Europe and other developing nations. Often ending up in warehouses, these kids were typically denied proper medical care and adequate nutrition and usually died young and alone. If they did make it out alive at 18, their lives were then marked with trafficking, violence, drugs and alcohol use, and early death. The journalist in me was intrigued–here was quite the human rights story–but the mother in me was horrified.

So I stepped up my volunteer activities, raising money for the individual adoption accounts of children with special needs in other nations through a nonprofit organization called Reece’s Rainbow. I spent hours and hours in those early days, scrolling through the children’s profiles, heart shattered at their stories of abandonment and neglect.

But the photos haunted me the most: eyes sunken in, bloated bellies from malnutrition, limbs the size of straws, shaved heads, bruises, and cuts abounding. They matched the real-life experiences of my adoptive friends, including one who brought home a daughter weighing eight pounds at four years old, denied food and touch simply because of her Down Syndrome.

I started researching, discovering entire cultural, political and economic systems that effectively work to disenfranchise Third World parents of children with special needs from the right to raise their children. ‘Send your baby to a government orphanage,’ they’re told. ‘They will be taken care of. Otherwise, this child will be a burden to your family.’

This information upended my entire life. I had always seen adoption as finding a family for a needy child—but what if they already had one?

So a continent away from any family support, three small children at home and a husband who was often gone, I entered graduate school to earn a master’s degree in International Community Development. My thesis and fieldwork focused on the relationship between the American church and the overseas orphanage industry. I had to discover how to not only ‘save the babies’ through adoption but keep families from ‘needing’ orphanages in the first place.

And then I saw Guyana.

Long-lashed and pageant-smiling, her chocolate eyes shot right through me from the laptop screen. ‘Oh, crap.’ I knew that feeling. It was the exact same wave that washed over me when they placed my biological children on my chest in the delivery room. ‘There you are, my child.’

Guyana, I soon learned, was in Armenia, nation I knew exactly two facts about: classical composer Aram Khachaturian, whose piano pieces I performed, was from there, and so were the Kardashians. I knew even less about her listed disabilities: the most severe form of spina bifida, hydrocephalus, epilepsy, strabismus, and severe scoliosis. Her parents had placed her in the orphanage with the hopes of adoption. Her extreme needs heartbreakingly prevented her from staying in Armenia, a developing nation with no advanced pediatric facilities.

We threw ourselves into learning everything we could about spina bifida and her other diagnoses and tackled the mountains of adoption paperwork.

So there I was, alone in Armenia, finishing our adoption of this stranger. The first few days had gone horribly, with Guyana embarking on hunger and sleep strike and refusing her epilepsy medications. I had no idea how to do her catheters, despite the orphanage workers’ attempts to teach me in Armenian. Plus, she hated me, making me doubt every conviction and mothering skill I possessed.

I returned her to the orphanage, completely defeated and undone by Guyana’s immediate willingness to accept food and drink from the nuns but not me. I understood why, of course, but it still fed into every insecurity I could possibly have.

Had a magic projector dropped from the orphanage ceiling, showing me our family’s future, I would have watched in disbelief.

I would have seen a miraculous journey home in which we were released from detainment and not arrested on suspicion of human trafficking at multiple borders for purposes of using Guyana’s organs as ‘spare parts’ for her new siblings.

I would have seen Guyana learn English in just a few weeks–a huge surprise, considering she spoke incredibly delayed Armenian. The mystery was solved months later when doctors informed us our newest child was nearly deaf.

I would have seen Guyana learning to chew, crawl, climb stairs, pull herself up despite her lower-limb paralysis, learn to use a wheelchair and walker and complete hundreds of hours of physical, occupational and speech therapy. I would have watched her stare in awe at my body, able to run marathons, and my husband’s muscles, strong enough to power through American Ninja Warrior courses. Suddenly, I no longer pined for a different cup size or a thigh gap.

I would have heard her swear at me in Russian after groggily coming out of her first of ten surgeries with us (so far). Don’t tell my very proper mom, but it was the cutest cursing ever.

I would have watched as the months and then years went by without Guyana gaining a single ounce or inch. ‘Huh, we’ve never seen this before,’ the doctors always said–but instead of demanding results, as my old self would have done, I followed Guyana’s lead and rejoiced in the positive changes in her skin, eyes, hair, brain, muscles, and behavior. They’re enough for us.

I would have dubbed that magic projector a liar if I had seen me calmly dealing with doctors and days-long hospital stays without losing my cool and having a panic attack. A traumatic first birth had launched me into years-long post-traumatic stress, rendering me frozen or fighting in any medical setting. But somehow Guyana healed me.

I would have surged with compassion when I saw the relationship developing between her ‘first family’ and us. How marvelous to have two families who love you–and each other!

I would have watched Guyana compete in wheelchair baseball leagues and beauty pageants, appear on national TV and local radio and dazzle everyone she meets. I would have stood in the background as she spoke to the homeless, the sick, the stranger, the misfit: ‘I think you’re just wonderful, and I like you!’ she always says.

I would have laughed hysterically as I learned one of her favorite pastimes: freaking people out at the grocery store by twisting her hip-less, feeling-less right leg into a very unnatural position from the cart and pretending that it’s broken.

I would have felt her 28 pounds snuggle into mine, stroking my cheek. ‘Mommy, I’m so glad you found me in Armenia and brought me here. I missed you when I didn’t know you.’

At eight years old, Guyana feeds herself now, and most nights she helps me prepare dinner. She has no idea that she fed my soul through its own period of malnourishment, my own lifelong hunger strike against self-acceptance, sacrificial love, and deep joy. But we’re feasting together now.”

This story was submitted to Love What Matters by Crystal Kupper of Burlington County, New Jersey. You can follow Guyana’s journey on Facebook and Instagram. Do you have a similar experience? We’d like to hear your important journey. Submit your own story here. Be sure to subscribe to our free email newsletter for our best stories, and YouTube for our best videos.

‘If you do this, you will destroy your family.’ They looked me straight in the eye. Wow.’: Mom of 6 adopts internationally out of birth order despite harsh criticisms, ‘our story is messy, but worth it all’

‘I got my bags in the car. ‘Don’t worry, I’m NOT going to come home wanting to adopt.’ My husband shook his head. I was so nervous, I was going to puke. I wasn’t sure WHY I was going.’

‘Then came the call. ‘Come to NYC and get your daughter. She’ll land in 3 days!’ We immediately jumped on the plane, but then a hiccup.’

Help us show love and compassion are contagious. SHARE this beautiful story on Facebook with your friends and family.