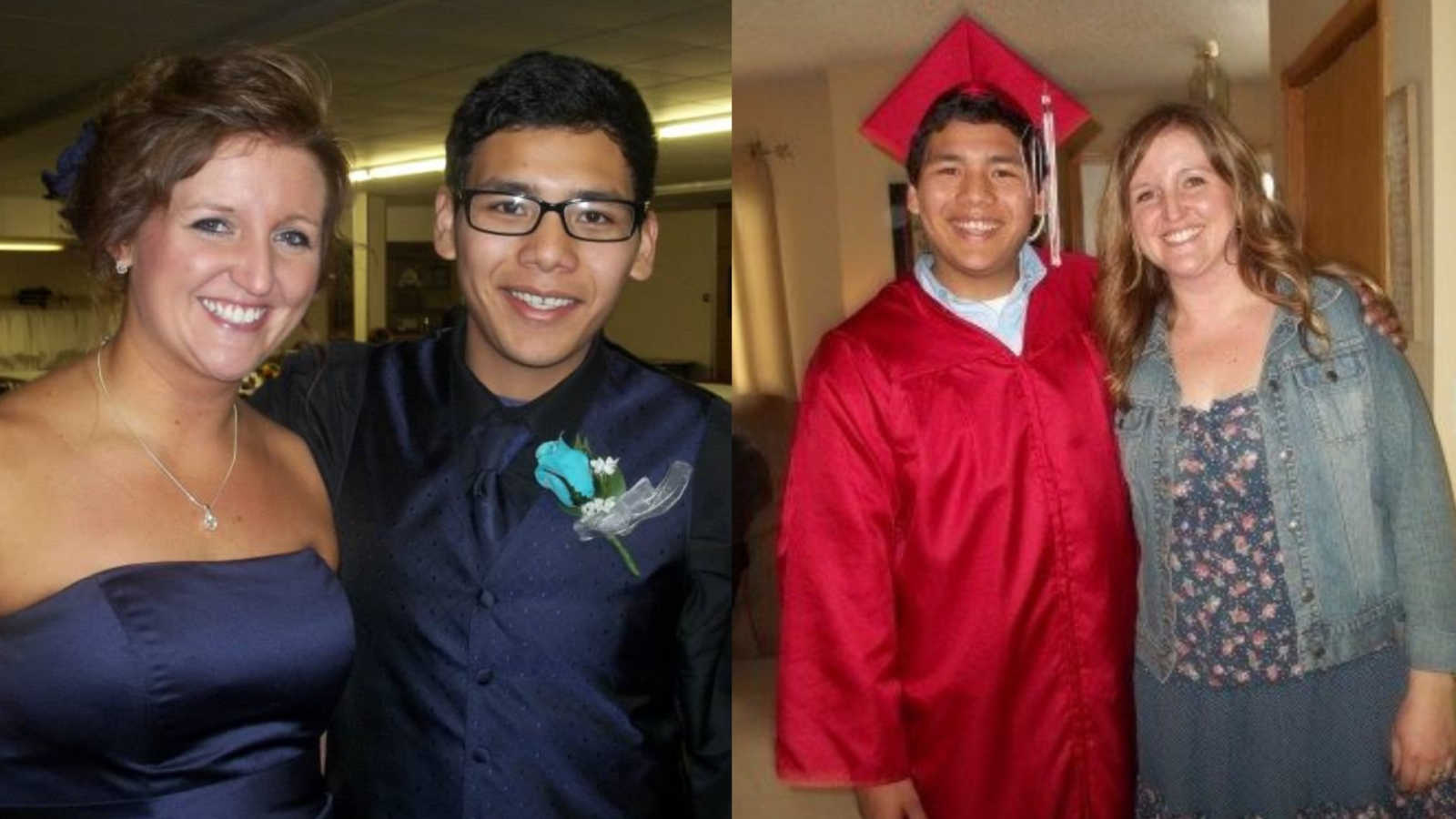 “‘This might sound like a weird question, but is he your son?,’ asked the young woman working at the gas station, gesturing to my 24-year-old son, Wynd. He had become a part of our family through the foster care system when he was 15. We were in a town 3 hours away from where we live. Although Wynd lives on his own now, he was traveling with us for my 9-year-old son’s soccer tournament, and we’d stopped to get gas and get some snacks.

I was surprised by her question, wondering how she would have been able to guess that. Because I am only 11 years older than Wynd, and because I am Caucasian and he is Native American, people don’t typically assume we are related at all, much less mother and son. If he introduces me as his mom to other people, there are usually subtle expressions of confusion.

‘Yes he is,’ I answered the young woman. ‘How did you know?’

She smiled and said that she had just read a story on Love What Matters that I had submitted, sharing our experience with foster care and the gift of coming to love Wynd as a member of our family. There were pictures along with the story, and she said she recognized us from there. She said she really loved that story, particularly as she had spent some of her teenage years in foster care herself, and while she knew that some people didn’t have good experience in foster care, that she had. She said it gave her such hope to know that others had had positive experiences as well, and had ended up with forever families. She said she had never been able to understand why her own foster parents would have been so willing to take in someone they didn’t know, and had no responsibility to, yet choose to love to selflessly. The young woman told us that hearing stories about other families, like her own, helped her to believe there are simply genuinely good people in the world. She said she hoped to be a foster parent herself one day.

When we got in the car, Wynd said he couldn’t believe someone who lived 3 hours away from our community would have even seen that story, much less have read it closely enough to recognize us from the pictures. Then again, the whole state of North Dakota is like one big community and these kinds of connections are not unusual! Wynd had read the story I wrote 5 years ago when I wrote it. I’d written it in a response to our foster care agency’s request for success stories that could be used in recruitment efforts, and I’d had him read it before sending it to anyone to make sure he was okay with the information I’d included. But because he doesn’t use social media, he hadn’t seen it on Facebook when Love What Matters published it, so I got out my phone and pulled up the story that had appeared on Love What Matter’s Facebook page. I told him to scroll through the many, many comments that were left by people who read the story. He did this quietly while I drove. He eventually looked up. ‘I can’t believe this story matters to so many people,’ he finally said.

I was grateful for that moment, because just a year or so before that we’d had a conversation that had left my heart heavy, and I hadn’t ever figured out a way to bring resolution to it. A local social worker had contacted me, asking if I thought Wynd would be willing to be interviewed for a short video they were hoping to create, to be used on the news and social media for foster parent recruitment. I thought it was likely that he would, so told her I would call him and give him her contact information if he wanted to help. When I told Wynd about the request and explained what they were hoping for, his response came quickly and very firmly: absolutely not.

I was surprised not only by the answer, but how serious he seemed. In the past he had come in at the end of the classes I help co-teach that prospective foster and adoptive parents are required to take, to talk about his experience in foster care and answer questions asked by the people attending the classes.  He was always honest, funny and heartfelt in the responses he gave, and always got a lot of positive feedback from the participants when he was done. He had given approval for me to share our story with the intention of helping to recruit foster parents, and I thought this request was pretty similar to these other things he’d already done.

He said that he was in his early 20’s, working at an hourly job, and always waiting on his next paycheck to pay his bills. He had attended two years of college but hadn’t continued, not totally sure yet what he wanted to pursue. He’s had some challenges along the way. In his eyes this certainly was no ‘success story’ and he said that if he were the representative of the kind of person that foster care produces, certainly no one would be willing to do it, and it would end up destroying the recruitment potential of the video.

At the time I had told him that living paycheck to paycheck is not unique to his situation. I reminded him that he absolutely loves his job, something that has value that shouldn’t be underestimated, as not everyone can say this. He has plenty of time in life to return to college, if that is something he wants to pursue. I told him that despite the challenges, he continues to be one of the most resilient people I know. In my eyes, not only is he a success story as an individual, but that our collective story as a family is very much a success. Every year in December we all still celebrate on Dec. 16th, the anniversary of the day that Wynd came to live with us. We go out to eat together and then come home for dessert, and take an updated family picture. My biological kids have a big brother they love and look up to, and even though he doesn’t live at home anymore, there is a chair at the table that is always his.

Despite my attempts to reassure him that he was the perfect person to be interviewed for the recruitment video, he did not. I don’t know if he will ever truly see himself the way that those who love him do. So I was thankful to Love What Matters and to the young woman in the gas station this summer, as they were able to provide something to Wynd that I hadn’t been able to: to show him that his story matters.”

This story was submitted to Love What Matters by Katie Krukenberg of Bismarck, North Dakota. Do you have a compelling foster care story? We’d love to hear from you. Submit your story here, and subscribe to our best stories in our free newsletter here.

‘Who do you belong to?,’ asked the wedding photographer, to our 19-year-old foster son.