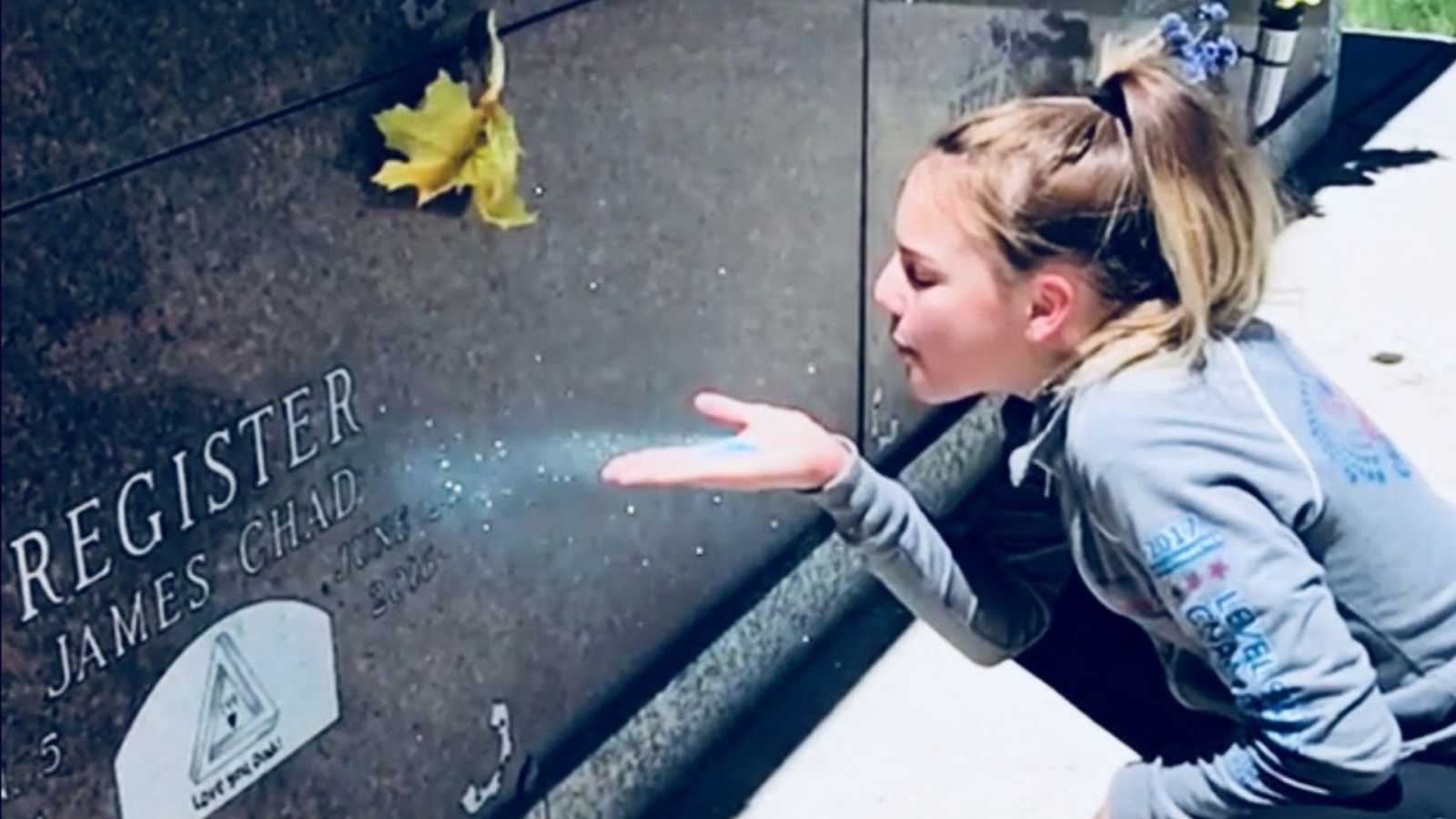 “When my husband died, his family and I decided to place him in a mausoleum. By doing so, I quickly found out there was really no place to leave flowers as the cemetery had decided not to allow vases on the front of their headstones. You can leave flowers on the ground, but they get picked up every week and whisked away. So, we would visit him and not really leave anything. Well, I did, but that’s a secret between him and me.

When somebody dies and you go to visit their final resting place, you instinctively want to leave something behind. Flowers, gifts, cards – whatever it is, there’s just the feeling that you want to do something to show them you were there. I don’t know why. It just feels right.

One afternoon in the fall after he died, my entire house had a meltdown. I can’t remember why, but it was just one of those days. I was crying, my daughter was crying, I even think the dogs were crying to be honest. Nothing was going right. Nothing felt right. Everything was just a mess. I sat down next to my daughter, and together, we just cried. I looked at her, wishing there was something I could do to fix her pain at that moment. I thought about ice cream. Maybe a movie. Maybe she wanted a friend to come over. But the only thing I could muster through my tears was the simple question, “Do you want to go see your dad?” With her eyes swollen and her cheeks puffy from crying, she nodded. We left everything as it was and hopped into the car and started on the 30-minute drive to the cemetery. We didn’t say much to each other, we just drove. As fast as legally possible, we just drove. We just wanted to be with him.

We pulled into the beautiful, tree lined cemetery and drove past the old headstones until we made our way to the mausoleum that housed my sweet husband. We quietly got out of the car and sat in front of him, still crying, placing our hands on the stone trying to touch him. I wanted to scream, ‘come out of there right now,’ but I knew it would do no good. So, we just sat, reflected and consoled each other while our hearts broke not knowing they could break any more than they already were.

As we got up to leave, it struck me that once again, we didn’t have anything to leave behind. Just the tear stained concrete in front of his tomb, and parts of our souls.

We hugged each other as we walked back to the car and as she opened the door, there it was. Two vials of glitter.

I laughed. I laughed a lot. Because, you see, glitter meant something to us and it is no coincidence it showed up in that very moment, right when we needed it.

At the time, my daughter was a competitive gymnast. She lived and breathed gymnastics and competed all over the West. They didn’t allow the girls to wear nail polish or lots of make up during competitions, but they did allow them to wear glitter in their hair. So, we stocked up on spray glitter, and each time before competition, she and I would stand outside on the porch and spray glitter in her hair. I don’t know if it was the first or second time we did it, but I remember getting a phone call from Chad one time after he had gone to work and asked why there was glitter all over his work bag.

Imagine this for a minute. My husband was a cop. And sometimes he had to work on competition days, especially after he got sick and ran out of sick time. Unbeknownst to us, the glitter we sprayed on her hair would fall off everywhere, yet instead of ending up all over the house, it was ending up in his work bag. All over his jacket, his handcuffs, ticket book and on his shirt when she hugged him goodbye. And nobody noticed until he got to work and sparkled in the sunlight on a traffic stop.

I imagine that was a sight to see. A big, strong cop out there enforcing the law, covered in glitter and twinkling the whole time. He probably hated it. It probably bugged him. The guys probably made fun of him. But, guess what? He kept hugging her when he left the house, competition day or not. Glitter or not. Sparkly traffic stops or not.

So, on this particular day at the cemetery, when we saw the glitter as she opened the car door, we knew we couldn’t pass it up. We finally knew what we were leaving behind during our visits. It was our thing. Our silly family thing. And I don’t doubt for one second he put it there to make sure we knew he was sending her a hug. So, we sent him a hug right back.

I bet he secretly likes it. I bet he’s smiling. I bet he thinks it’s funny. And I bet he’s telling all his friends in Heaven the story about the time he was covered in glitter while writing a ticket in the sun.

It’s hard sometimes to find the right way to honor your loved ones. It’s hard to figure out the best way to show them and the world how much you loved them. Keep your eyes open, friends. It will come to you. I promise. It will come. It might be when you least expect it, in the middle of the worst day. And, it might come in the form of something you least expect, like a vial of glitter. You just have to believe.”

This story was submitted to Love What Matters by Diana Register of Meridian, Idaho. Her books “Grief Life” and “Grief & Glitter” are available in print and on kindle. You can find more of her books here, and her podcast here. Connect with Diana on her author Facebook page, and Instagram. Submit your story here, and be sure subscribe to our best love stories here.

“About 30 seconds after accepting the ride, the rider sent me a message via the app. ‘I need you to act like you know me, and that you’re not my Uber driver’. When I got there, I had my window rolled down. She looked over and yelled, ‘Hi, Babe! I’ll be right there!’”

‘His entire world was falling apart. Carter turned to him, ‘I’m so glad you’re back. I missed you so much!’ We knew he was right where he was supposed to be.’: Couple adopts son from foster care

“The moment he came into our lives, he and Carter just clicked. We loved him like he was ours. We gave him one last hug before he left. But that’s not where his story ends.”

‘He saw my hand. ‘I was born like this.’ He left and stopped talking to me. I knew then I didn’t want to hide it anymore.’: Woman shares limb difference acceptance journey, ‘I have the right to a normal life’

“People loved me, loved the photo of a girl smiling with all her heart, even though she’s missing a limb. They saw my strength.”