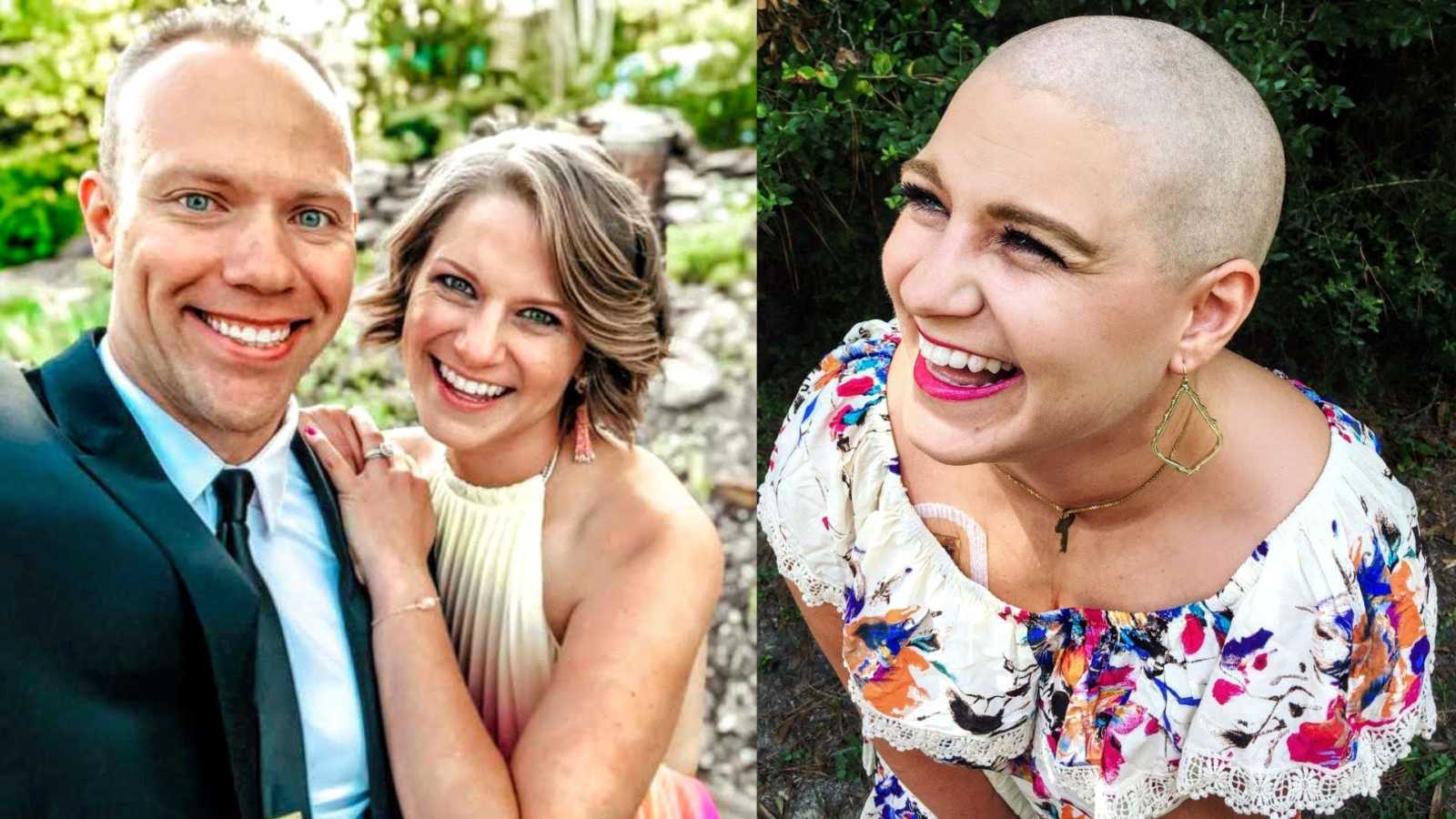 “I wasn’t sure if life could get any better than it was. My husband Wes and I were celebrating 3 years of marriage on the beautiful island of Oahu. It was all the cheesy things you would see in movies but I was living it in real life. Romantic walks on the beach at sunset, holding hands while snorkeling, and candlelit dinners accented by the perfect Hawaiian sunset as we clinked a glass of champagne to wish one another a Happy Anniversary. If there was a girl happier in her fortunes, I knew her not.

My dad’s job took my family to Houston, Texas after we returned to Colorado from Hawaii. We were sad to see them go, but thankful for Wes’ family still living close by. We had now launched into a beautiful Colorado summer filled with BBQ’s, cornhole games, and backyard chats. One beautiful Colorado night after a BBQ with family we got ready for bed and as I laid down to call it a night I immediately felt sick. I ran to the bathroom and hovered over the toilet, dry heaving. What was wrong with me? I had battled with tolerating food for 3 years, but nothing quite like this before. I went to lie down again and the entire sequence replayed itself. Something was seriously wrong. But what?

After sleepless nights and continued pain and nausea, we finally made it to a weekday where I went to the doctor’s office. Some of the same testing was ordered that I had over previous years on my gallbladder. I wasn’t expecting anything to be wrong with my gallbladder, and referencing the scans, they couldn’t find anything either. What was strange was they had come across what they called a ‘lesion’ nearby. It had disguised itself to look like it should be there, but it was peculiar to them as they knew it shouldn’t. The radiologist and doctor had never seen anything like it before.

I was immediately referred to a surgeon to remove the lesion. He also said he had never seen anything like it, but said it was unlikely it would be anything major. He did a nuclear medicine test on my gallbladder to find out it was only working at 25% of what it should be and he believed that was what had been causing me this problem for the last few years and this most recent struggle I faced. He said during surgery he would remove my gallbladder and the lesion since he would already be in surgery nearby.

When I woke up from surgery on July 6, 2017, I was notified my gallbladder had been successfully removed but the lesion was resting on my pancreas, only allowing a portion to be removed laparoscopically. He said there was less than 1% of a chance it was anything to worry about, but it was sent to pathology while I returned home to recover.

July 18, 2017, I received the news no one wants to hear. I was diagnosed with stage 3 sarcoma cancer that rested on my pancreas at the age of 27. It was a rare cancer described as aggressive, angry, and high grade. And it was still inside me.

At the time, there were not even 50 sarcoma oncologists in the entire country. And the surgery I would need called the Whipple Procedure was highly specialized and even life-threatening. With this combination, I was referenced down to Houston to a major cancer center that had specialists in both. It was right where my parents had just moved. The surgery and recovery time would be 2-3 months, so I would be away for a while.

‘I won’t leave your side,’ Wes said as he held me close with tears running down his face. ‘It’s you and me forever.’ And just like that, we packed up everything we could in our car and drove down to Texas to fight cancer together.

We were launched into a transition from ‘recently married’ to ‘patient and caregiver’ and there was no stopping it. I was trying to prepare myself for surgery, but as soon as we finished the first week of testing, I was told I would need 6 rounds of chemotherapy first (a total of 18 weeks) before radiation (4-5 weeks) and then surgery (2-3 month recovery). With the type of cancer I had, the cancer center had conducted a study and shared my survival rate increases by 25% by being treated in this manner. So, it looked like we would be in Texas for treatment for almost 9 months instead of the projected 2-3 months.

I have never experienced such love and loyalty in my life. Friends from college set up a fundraiser account to help us stay in Houston for treatment. Friends, coworkers, and family from back in Colorado helped move us out of our house while I was in treatment as we were stranded in Houston during Hurricane Harvey. The letters, visits, gifts, prayers, and messages were incredibly kind and encouraging. And my husband – he was the light of my life that shone brighter than the Hawaiian sun we danced under just months prior.

I had never seen such loyalty and love in a man. He lived out his vows that he said every day. He led our family in faith, love, support, and true care. He never left my side through every chemo, appointment, sleepless night, and tears cried. Things got bad towards the end of chemotherapy and we even wrote out my funeral together as suggested by the nurses in the E.R. on one of many visits I had. He loved me with all he had. I didn’t know I could love him more, but I had never seen a love like this before.

Sadly, I stopped responding to chemo and had to stop after my 4th cycle. Radiation was then determined to be too dangerous, so a surgery that was projected in spring of the next year would now occur at the start of winter.

On December 13, 2017, I was wheeled back for The Whipple Procedure. The Procedure is a 4-6-hour open surgery where 7% of people do not make it off the table alive, but if they do, it is certain to be life changing. I was to have my cancer removed as well as the head of my pancreas, 2nd quadrant of my small intestine, part of my stomach, and part of my colon with a full intestinal reroute.

When I woke up after surgery, I saw my husband and my mom who were ear to ear in smiles. ‘Nicole, did you hear?,’ my husband asked. ‘You are cancer free!’ Oh, the words I had longed to hear since I was told I had it. I could hardly believe it as tears rolled down my face. But Wes continued. ‘Nicole, you were only back for a couple of hours,’ he said with uncontainable excitement. ‘When the surgeon went to remove the cancer and begin the Whipple Procedure, he couldn’t find cancer anywhere! They spent the rest of the time looking at reports and searching for it but when nothing was found they closed you back up.’ He continued, ‘You are cancer free and you did not have the Whipple Procedure!’

How could it be? Just weeks prior the scan showed the cancer had stopped responding to treatment. It was unexplainable by my surgeon. It could only be referred to as a miracle as he does this procedure 80-90 times per year and he said it had never happened to him before. I could hardly believe it.

I was home by Christmas and overjoyed in more ways than one. Not only was I cancer free, but I experienced love from family and friends in a new way. I saw my husband in a new light and had fallen in love with him more than I ever dreamed I could be. Our story had changed from dancing in the moonlight to fighting a war on cancer and it was the most beautiful love I had ever known.

We are back in Colorado where I am now 1 ½ years cancer free! I have scans every 3 months back in Houston, Texas and my husband is always there beside me. We have dedicated our lives to living with abounding faith, overflowing love and servitude to others, and advocating for those with cancer. I wouldn’t trade a single moment of it for anything. And whatever moments I have left, I will not waste them. Today is a gift that does not attach a promise of tomorrow. So, today, I will live well.”

This story was submitted to Love What Matters by Nicole Body of Parker, CO. You can follow journey on Instagram here and her website here. Submit your own story here and be sure to subscribe to our free email newsletter for our best stories.

‘I wore red lipstick during my mastectomy. The nurses joked I looked ‘too good’ for somebody having surgery. I had a huge party the night before. I bought a wig to look like Britney Spears!’