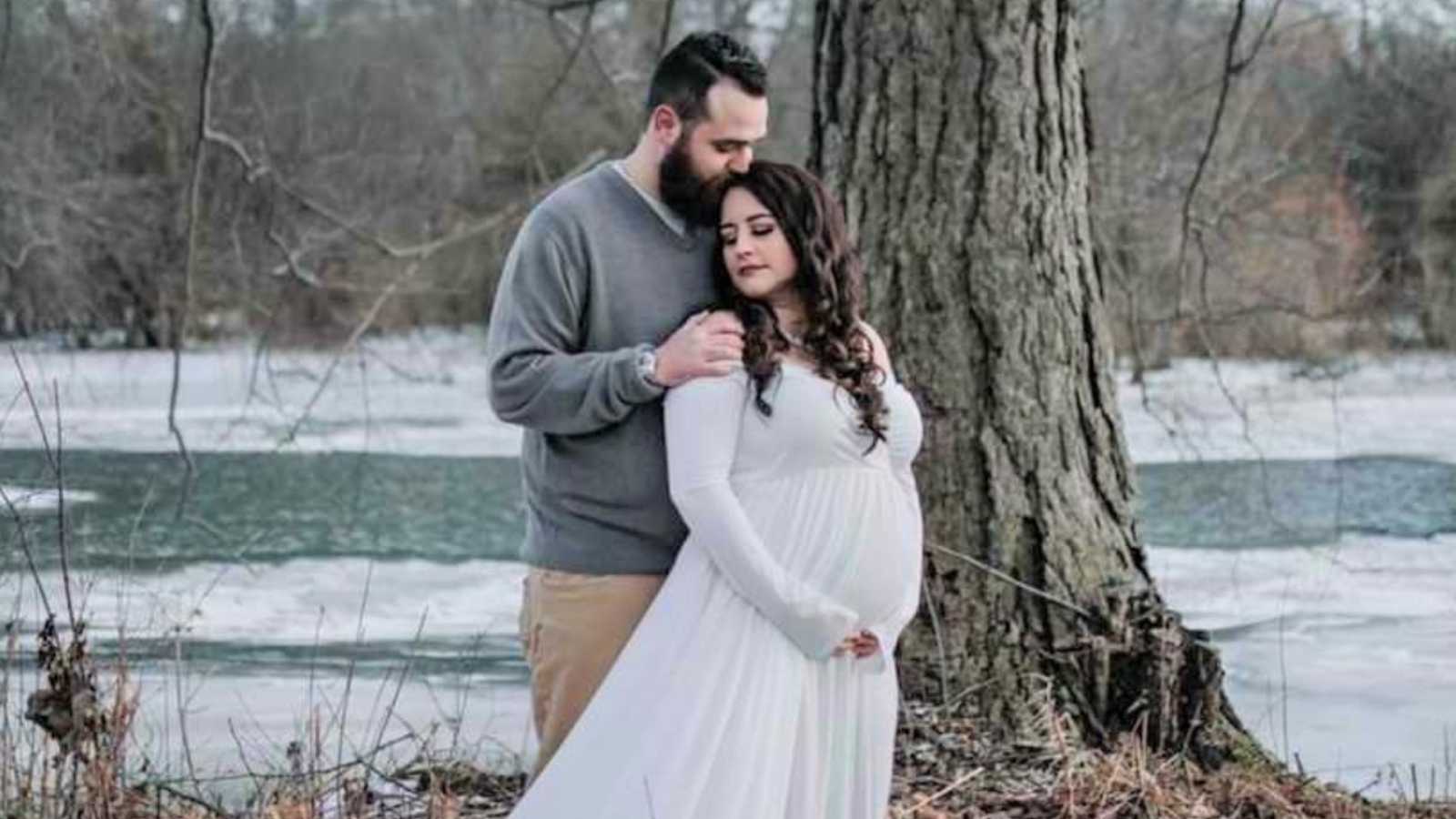 “My husband and I were trying to conceive. We lost a baby in 2015, and we finally decided to start trying again. We were starting to feel so defeated, then, we got those two pink lines. We were thrilled, and we couldn’t wait to tell family and friends. A couple weeks after we told our family and friends, I found out I was miscarrying. I lost that baby May 4th, 2018, the day before my 25th birthday.

As soon as we got the clear, we started trying again. I started tracking everything again, and then a few short months later we found out we were expecting our rainbow baby. I remember holding the test in my hand, shaking, and crying happy tears.

I dropped to the ground, crying.

Later that day, I started spotting. Then the bleeding got very heavy. I called my doctor back to get in to see them.

I went in, and as I was crying, I asked for them to test my hormone levels. I had losses on the past and I needed to try to figure out why this was happening.

The doctor told me there was nothing he could do, and to think about my ‘options’. I decided to let everything pass naturally, and as I cried, I begged him to test my levels. He declined my request.

I went home to grieve and let things pass. I was hurting emotionally and physically the pain was starting to get unbearable.

I called the next day and demanded my levels get tested. After arguing, they finally agreed. I went in and after I received the results, I was told my progesterone was very low, and there was nothing that could be done.

I prayed before I walked in. I carried a sticky note with me to bring me comfort. The note read ‘Exodus: 23:26 no one shall suffer miscarriage or be barren in your land ‘.

I scheduled an appointment with a new OBGYN for the following Monday. I refused to go to the same one I was seeing after the disagreements I had with them.

My new doctor told me we would do an ultrasound to make sure everything was gone. I walked into the office to meet him, and I broke down in tears when I met him. He made me feel reassured, and safe. He told me we would figure out why I have had losses in the past and he would help me.

Then, I went into the ultrasound room with my husband. I felt so drained, and really didn’t want to have to look at an empty screen to confirm the baby was gone. My husband held my hand.

The ultrasound technician moved the Doppler around, making no noises, saying nothing, and I stared at the blank white paneled ceiling trying to focus on anything other than the empty screen next to me.

Then, she tilted her head and said, ‘What did they say at the hospital?’ And my husband and I told her they told me the baby was gone. She looked at me, looked at my husband, and she smiled. She turned the screen more towards us and pointed at the flicker on the screen. The slightest light, like a little firefly, and said ‘that right there, that little flicker is your baby’s heartbeat’. I don’t remember what I said next, I think it was along the lines of ‘What, are you sure?’.

I didn’t want to get my hopes up, it felt like a dream. I looked at my husband and his mouth was open, staring at the screen and he looked at me and squeezed my hand and smiled.

I walked out of that room, still in disbelief. I felt joy, but also so much fear. I wondered what if it was a mistake? What if the machine was malfunctioning? What if the baby is still there and I still lose it?

My doctor talked to me after the ultrasound and told me the baby looked healthy and was still there. The baby had a strong heart rate as well. I just sat there in disbelief and started crying. I expressed my fears, and he told me he couldn’t explain what was going on and why I was bleeding but to ‘trust in the man upstairs’.

I was told to take it easy and if my bleeding increased to go to the ER and watch for large clots. We went home, and my husband kept telling me it’s going to be okay; he just knows it.

The following day, I woke up with my husband praying over me before he left for work. He never did this before, he was kneeled right beside me, praying. He continued to pray over me for days to come.

Later that day my bleeding increased a little and I started passing clots. This would go on for a couple day’s and then the weekend came. I passed very large clots and finally, a large one and my bleeding slowed down. I felt empty. I felt drained. I cried and I cried, and I begged God for a miracle. I thought that was it, the baby was gone. My pain went away, and I thought that was it. I made an appointment for yet another ultrasound on Monday.

We went to the appointment, and my husband just kept saying ‘It’s not over, I feel it’. I didn’t want to listen, I just tuned the world out at stayed silent.

As the ultrasound tech put the gel on my stomach, and started moving the Doppler around I again, stared at the ceiling trying to focus on anything but what was showing on the screen.

She stopped, and said, ‘you’re not going to believe this’ and my husband said ‘look’ and squeezed my hand once again to comfort me. I looked, and I cried. ‘That baby is a fighter, they are hanging on with everything’ she said. That flicker, that sweet loving flicker, still there.

My baby was still there.

I bled for another eight to nine weeks, and there was no reason they could fine. But with each appointment, each ultrasound to make sure the baby was healthy, my baby hung on.

Every night my husband and I would pray together, and every morning I would wake up to see him kneeled next to me, in his work clothes, getting ready to leave for the day, and him praying over me and the baby.

I also carried that sticky note I mentioned, with me everywhere. I would read it over and over to help calm my worries.

My bleeding eventually slowed down, and then stopped.

The rest of my pregnancy was incredible, my son was healthy, and strong and around 37 weeks I had to be induced. 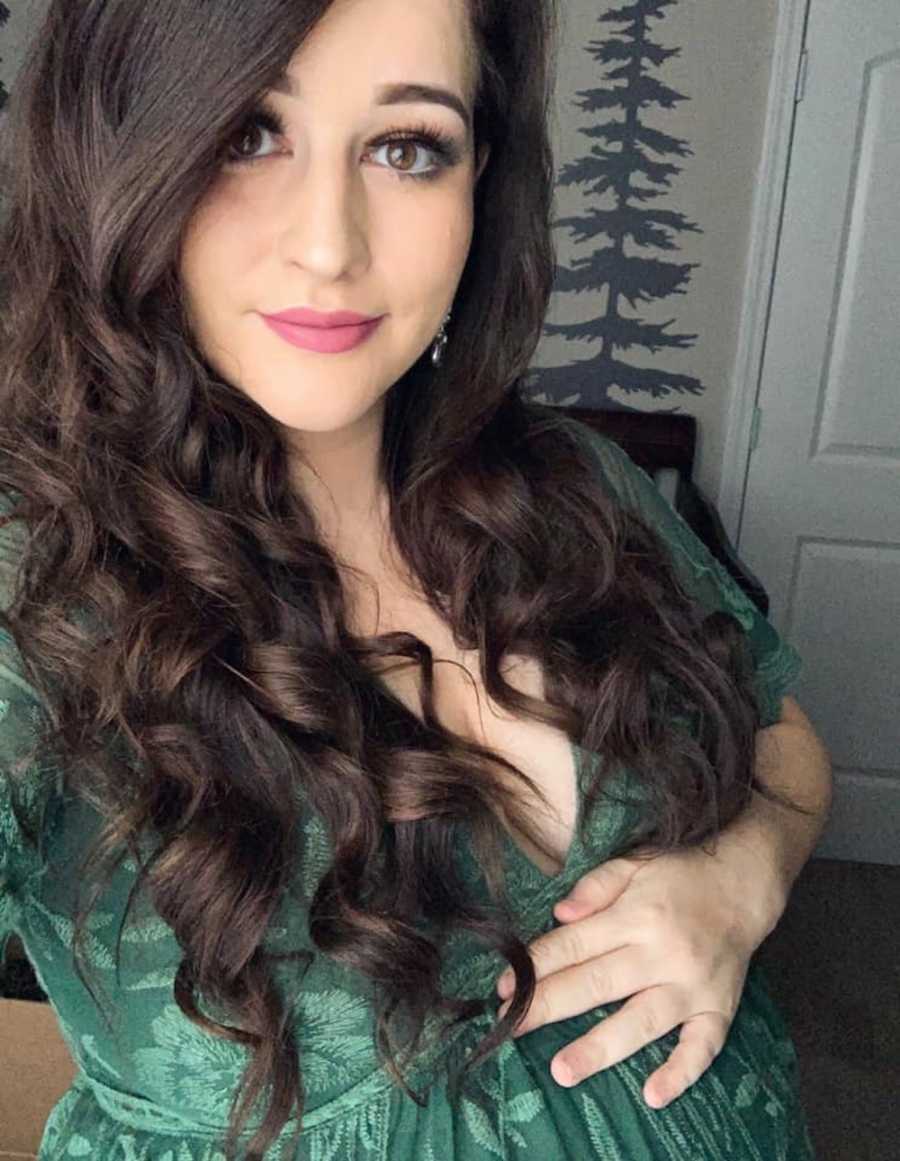 At my appointment on 3/18 I mentioned itching. I was then tested for ICP which is Intrahepatic Cholestasis of Pregnancy. This is a condition in which the normal flow of bile is affected by the increased amounts of pregnancy hormones. It can be dangerous to the baby, and most women are induced early because of it.

I got my test results on 3/20 and was told on 3/21 I would need to be induced. 3/21 I hit the 37-week mark and went in to get induced. On 3/23 our little miracle entered this world. Emerson Joshua Carr was born healthy, happy, and so perfect. He is our constant reminder that unexplained miracles can happen, and this little boy is our whole world, he lights up our life. He is our misdiagnosed miscarriage and our rainbow.

All of the crazy things that happened seems so far away, and I’d go through it all a million times over for him.”

This story was submitted to Love What Matters by Nicole Carr, 26, of Wyandotte, Michigan. Follow her journey on Instagram here and Facebook here.  Do you have a similar experience? We’d like to hear your important journey. Submit your own story here. Be sure to subscribe to our free email newsletter for our best stories, and YouTube for our best videos.

‘Do you want to tell me about her?’ I will never forget the way you leaned in, just like we were friends, and asked me about Dorothy.